A Genshin Impact fan artist has been driven to apologize after a piece featuring Kaeya drew accusations of ‘colorism’ from an internet outrage mob. 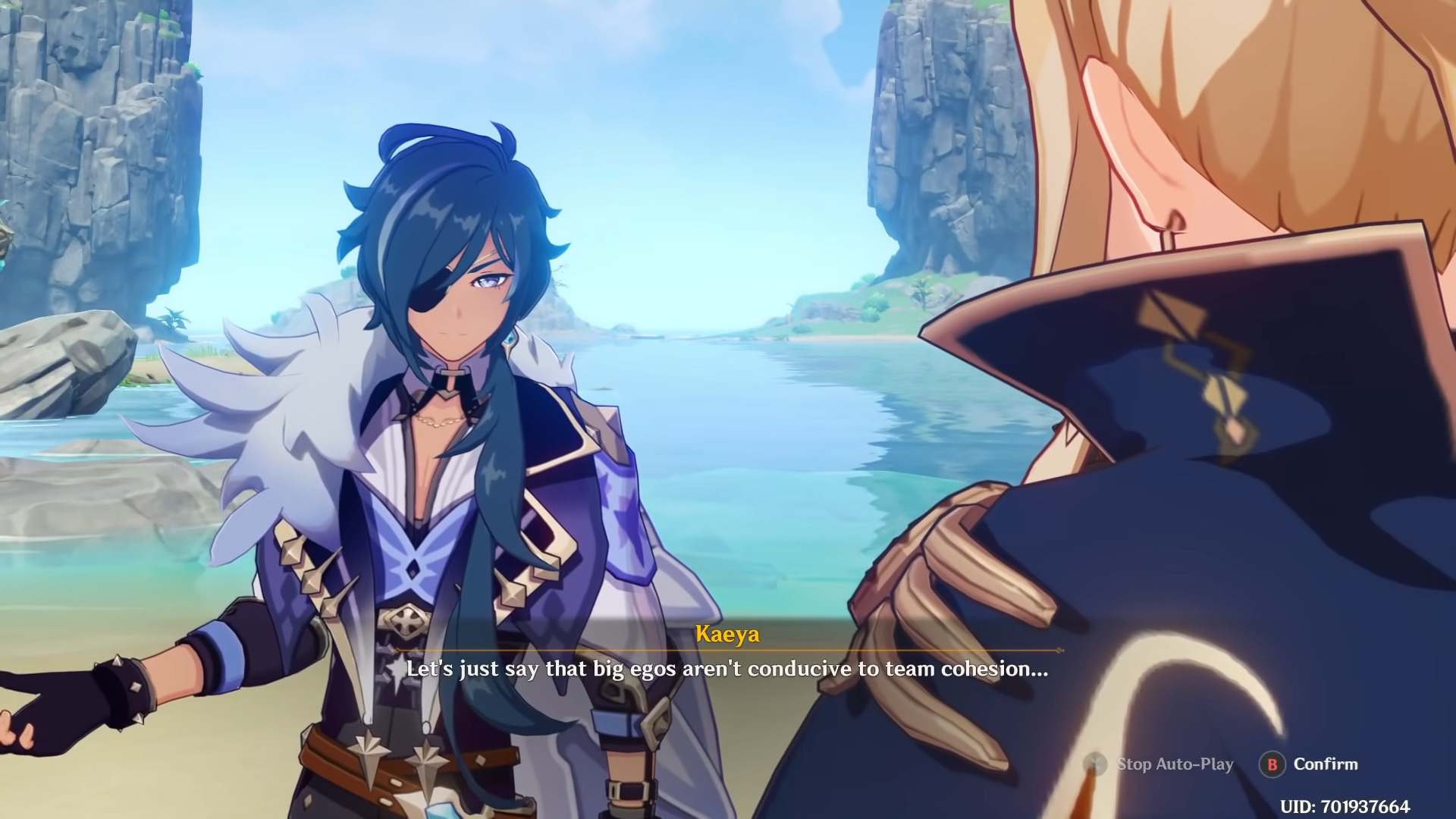 While the latest threat concerning artists is the possibility of their art being stolen and sold as an NFT, roving ‘colorist’ witch hunts have plagued creatives for years.

These mobs, seeking to rake artists over the coals if they produce a piece of art whose skin color differs slightly from the darkest interpretation of a character’s appearance possible, usually originate from Western social media users and have infected numerous fandoms, including Pokémon, Steven Universe, and even Sonic the Hedgehog. 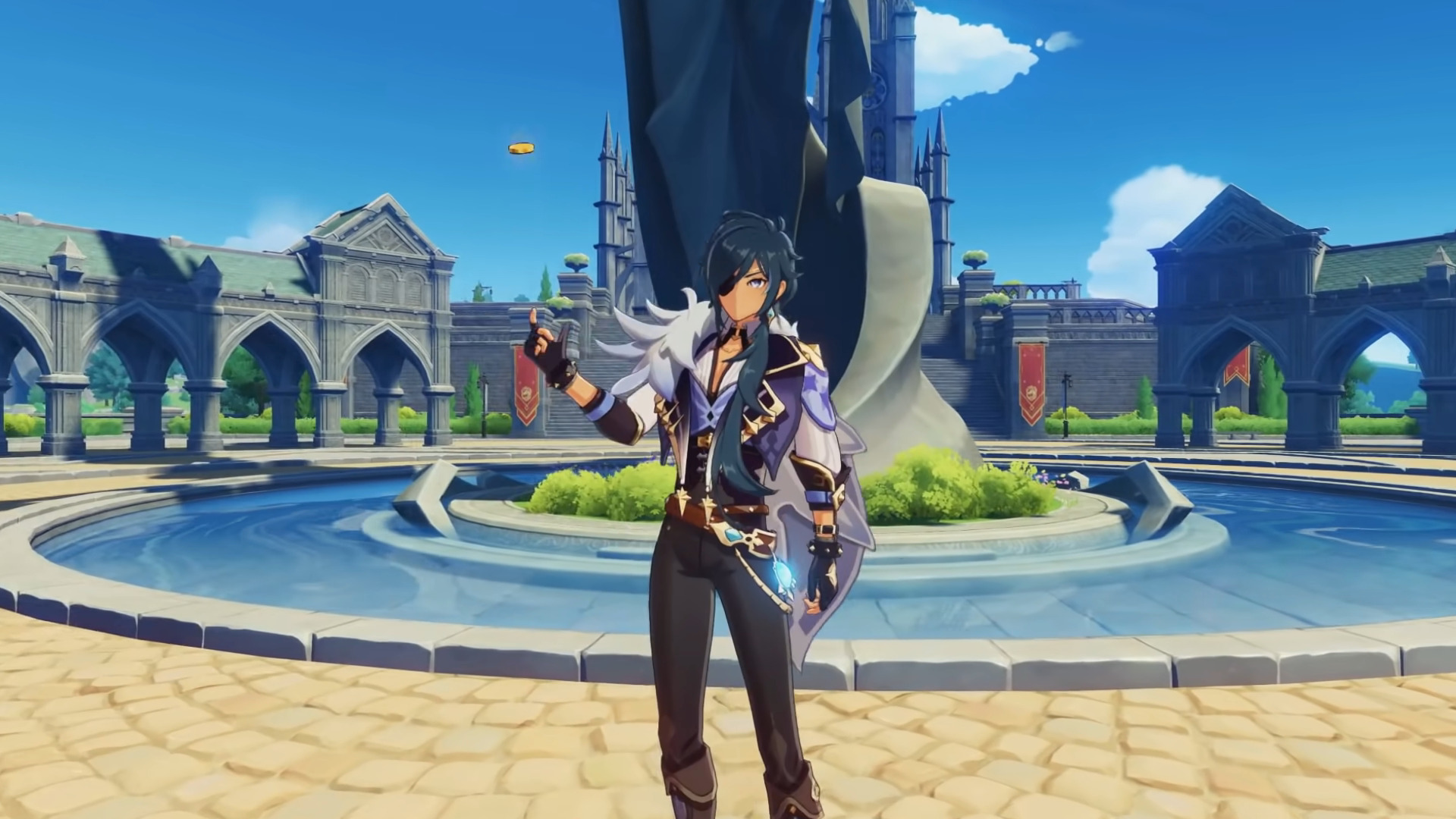 Given it’s popularity, it should come as no surprise that such pedantic self-appointed art censors have even found their way into the Genshin Impact fandom, as seen in the recent outrage over a fan drawing of Kaeya.

On May 21st, Japanese artist @dir___4’s shared of an original illustration depicting the Cavalry Captain of the Knights of Favonius from the waist up, standing with his arms crossed. 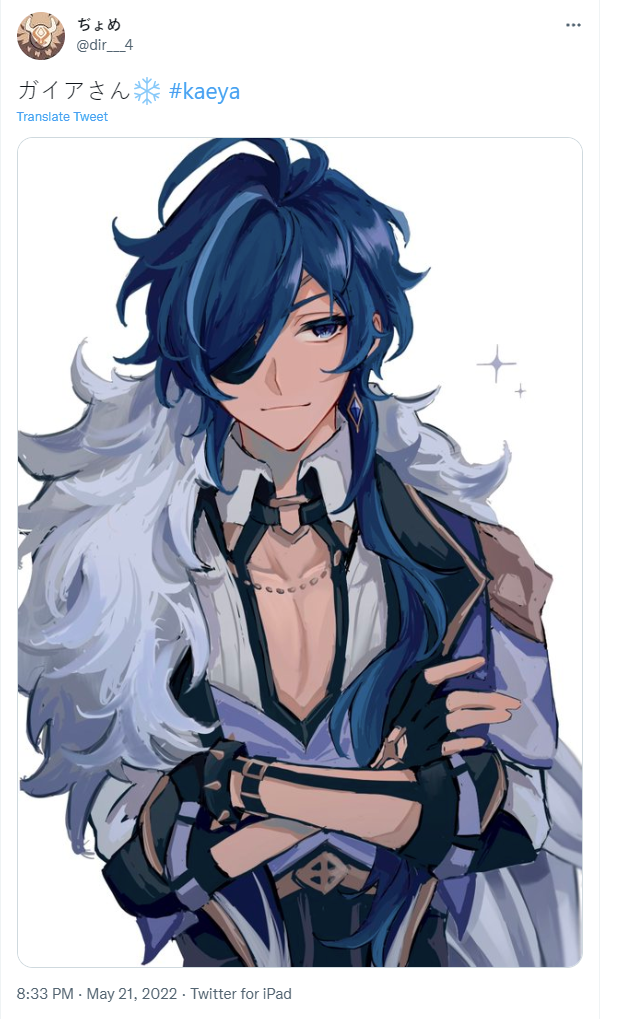 Almost immediately after sharing their piece, @dir___4 found themselves the target of a colorist outrage mob, the members of which accused them of ‘white washing’ the Genshin Impact character and went full force in demanding the artist “fix” the art by making Kaeya darker.

“DRAW HIM CORRECTLY OR DONT DRAW HIM AT ALL” exclaimed @kaeyatic. 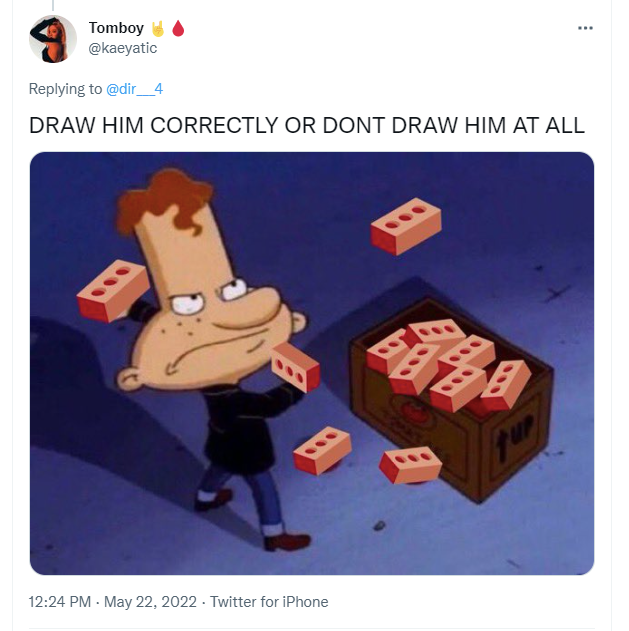 Displaying their lack of knowledge regarding stylistic coloring tones, @I25118525118I lashed out at those who found no issue with the piece, asserting “The people who are saying ‘oh don’t worry about other people your art is nice’ it’s not about the art style it’s about the coloring of the skin because everyone knows, even the artist knows that kaeya is not that light/pink.” 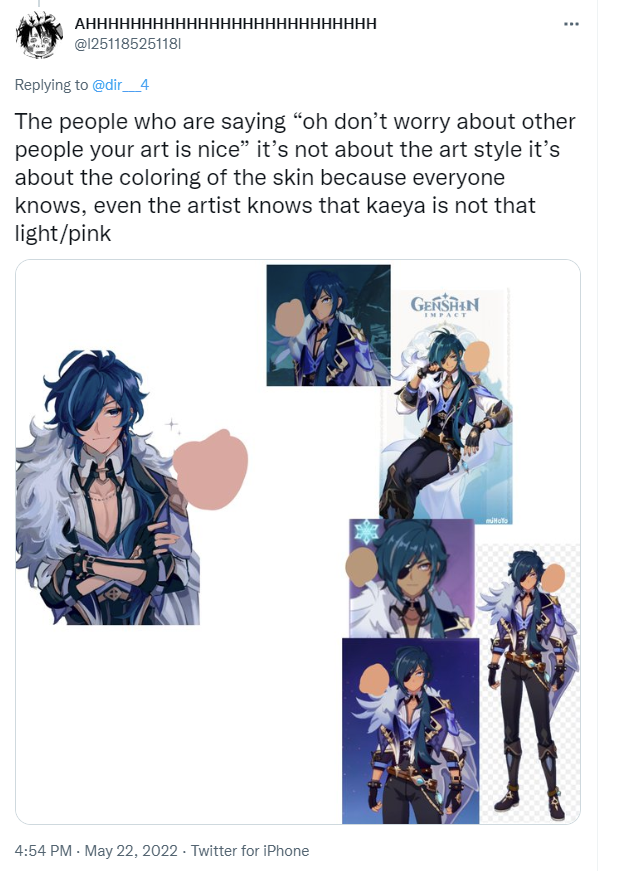 Conversely choosing to outright ignore the aforementioned coloring concept, @kezangrr decried, “yall love to butter up artist whenever they lighten a characters skin just because they’re art is good. it’s literally not hard to draw a character with dark skin. stop using lighting or highlights as an excuse.”

@ennikitty drew a false equivalence between the drawing of Kaeya and the editing of official character art to make characters appear black.

“so…black edits cross the line but making a character who obviously has tanned/darker skin lighter is okay?” they asked. 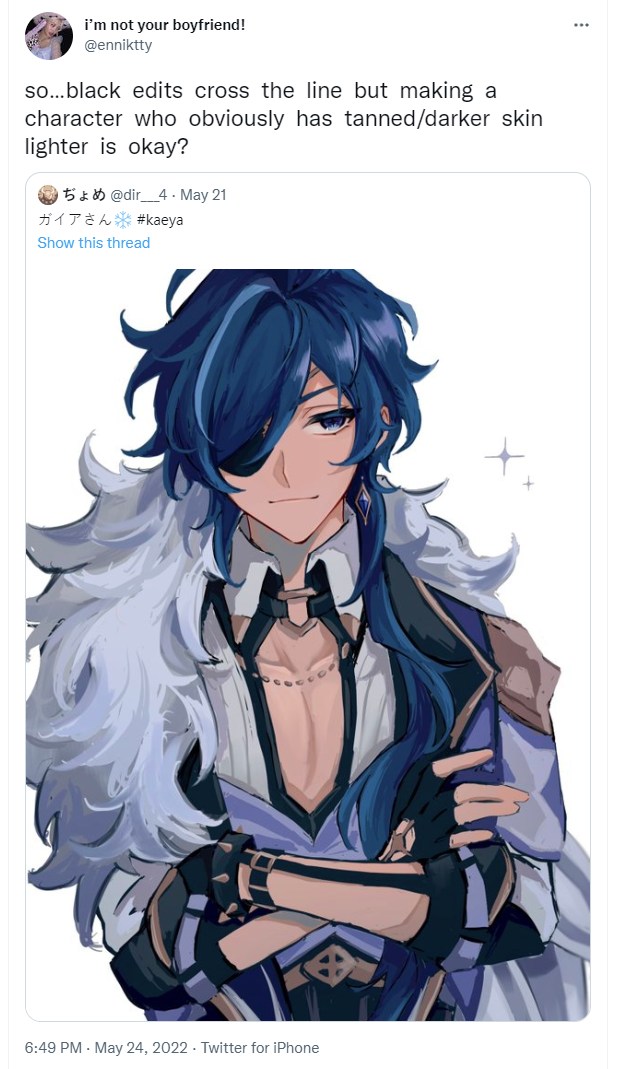 Some of the outraged even took to editing @dir___4’s work to darken Kaeya’s skin tone, such as @WHERETHEMPANADA.

“THAT’S ENOUGH” they declared alongside the sharing of their edit, adding in follow-up, “if you won’t color him correctly i’ll do it myself damn it”.

@ruichikaz was another user who shared a darkened skin edit of @dir___4’s work. 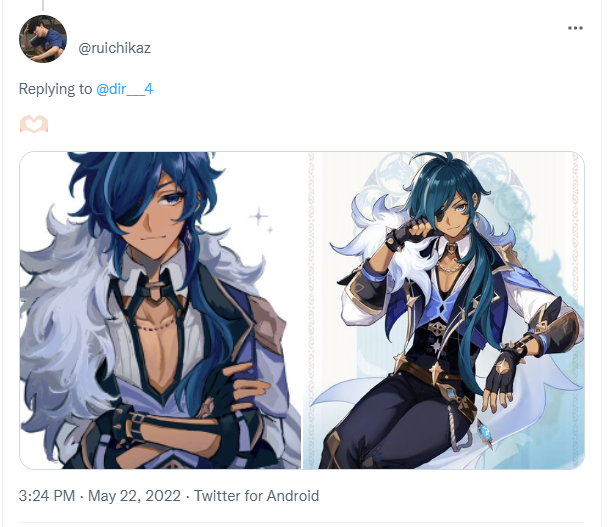 Bombarded by responses such as these, @dir___4 locked their Twitter for a few days before eventually returning on May 24th to apologize “for Kaeya’s illustration.”

“I didn’t mean to paint Kaeya’s skin color brightly,” wrote the artist in English via the use of a machine translator. “While adjusting the color of the illustration, it turned into this color unintentionally. I’m sorry for making you feel uncomfortable.”

Unfortunately for @dir___4, their apology did little to quell the mob, who continued to position their unwarranted bullying of an artist as a heroic deed.

“ok no hate to the artist cuz they apologized: the way y’all r saying that brightening poc skin tones r ok cuz it’s art,” said @venimate. “no it’s not ok nor will it ever be ok. stop making ppl feel bad for not being ok with whitewashing.” 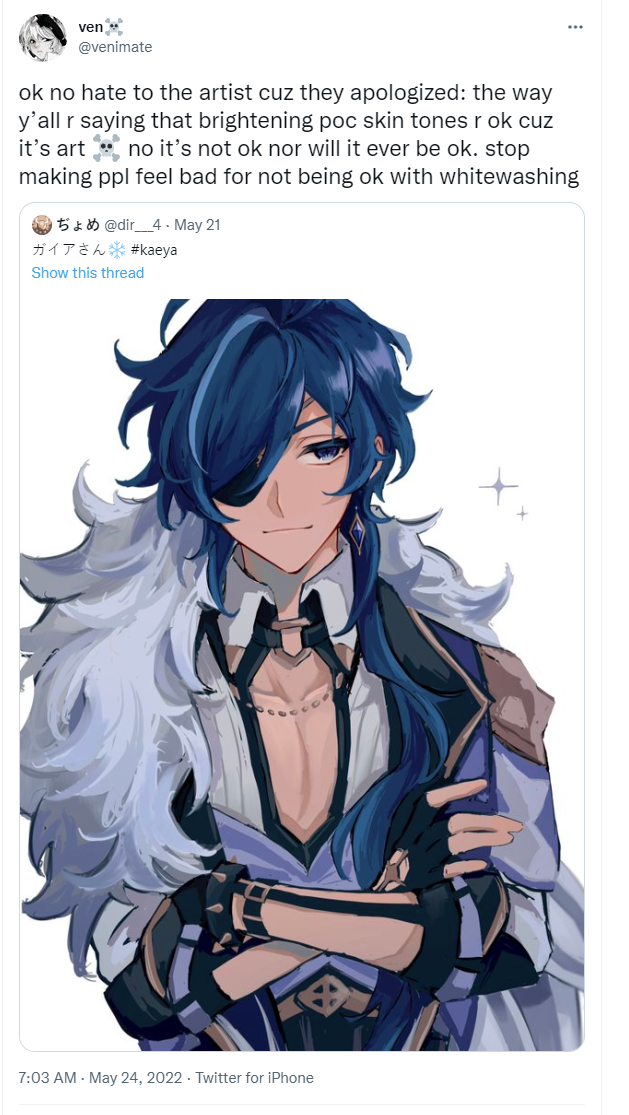 @taphiess likewise patted themselves on the back by responding, “Everyone in ur replies are weird.”

“‘Westerners don’t like whitewashing! So hero complex!'” he mocked of those who saw no issue with the original piece. “No. It’s just being a decent person & not being a weirdo and whitewashing a person with darker skin.”

However, not all Genshin Impact fans agreed with the colorist outrage mob, with many not only finding the controversy to be absurd, but also offering up evidence proving it to be unfounded.

“This is why less and less artists wanna make art of #GenshinImpact because they have to deal with trash like this” said @SHIRO_116. 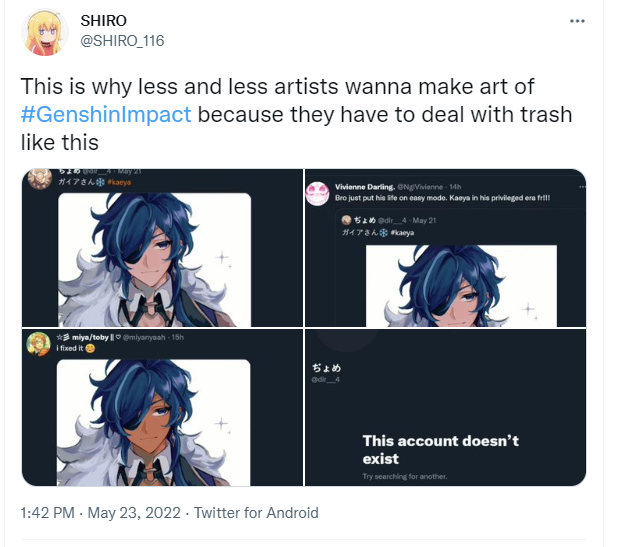 “People need to get over themselves and stop with this nonsense” said @verosethorn. “Kaeya isn’t dark and sexualities aren’t confirmed in the game.  Nor does it matter.  That’s why headcanons exist.”

Alongside their tweet, @verosethorn shared a trio of comments posted under YouTuber Hero Hei’s coverage of the story which offered pushback against the mob’s accusations of white washing. 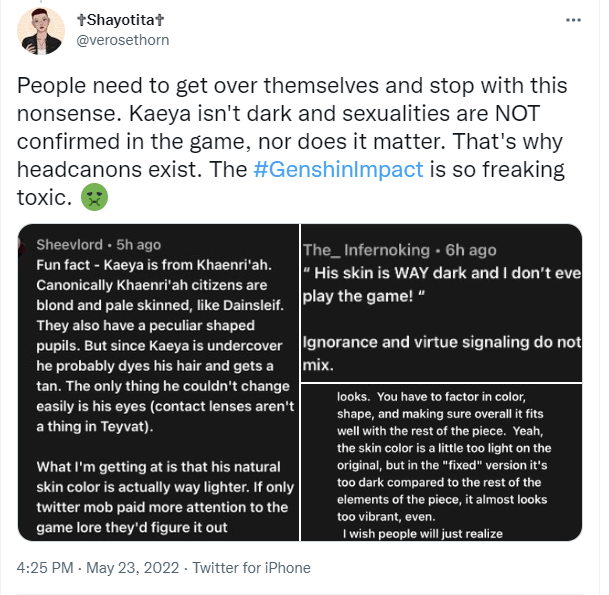 “Fun fact – Kaeya is from Khaneri’ah,” wrote Sheevlord in the first shared screenshot. “Canonically Khanenri’ah citizens are blond and pale skinned, like Dainsleif.  They also have a peculiar shaped pupils.”

They further speculated, “But since Kaeya is undercover he probably dyes his hair and gets a tan.  The only thing he couldn’t change easily is his eyes (contanct lenses aren’t a thing in Teyvat).”

“What I’m getting at is his natural skin color is actually way lighter,” they added. “If only twitter mob paid more attention to game lore they’d figure it out.” 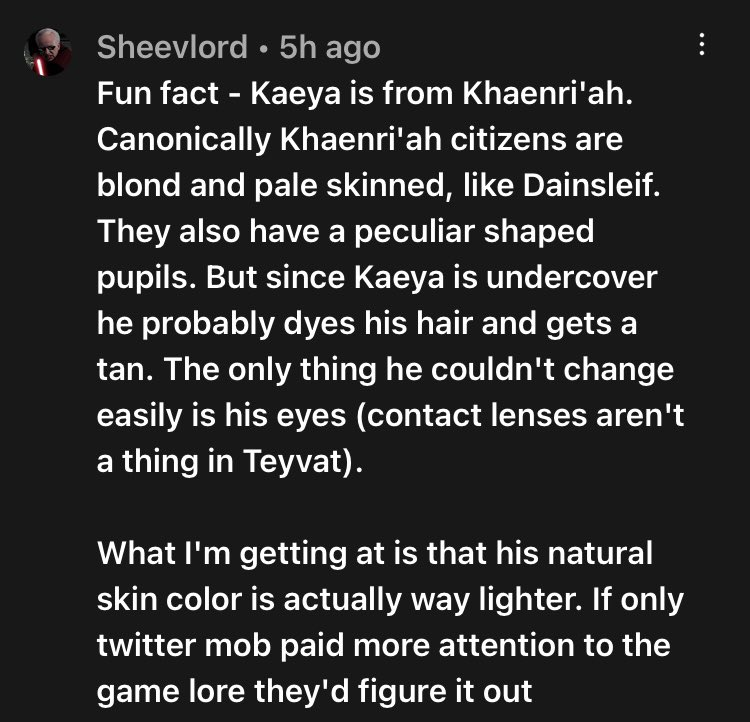 In the second, The_Infernoking mocked the outrage, writing, ‘”His skin is WAY dark and I don’t even play the game!’ Ignorance and virtue signaling do not mix.'”

“I’m an artist, and I can tell you lighting is extremely hard,” said Artemi, as seen in the third and final screenshot. “Harder than it looks.  You have to factor in color, shape, and making sure overall it fits well with the rest of the piece.”

“Yeah, the skin color is a little too light on the original,” they explained, “but in the ‘fixed’ version it’s too dark compared to the rest of the elements of the piece, it almost looks too vibrant.”

“I wish people will just realize regardless of the issue it is EXTREMELY disrespectful to make another person’s art without permission,” Artemi concluded. 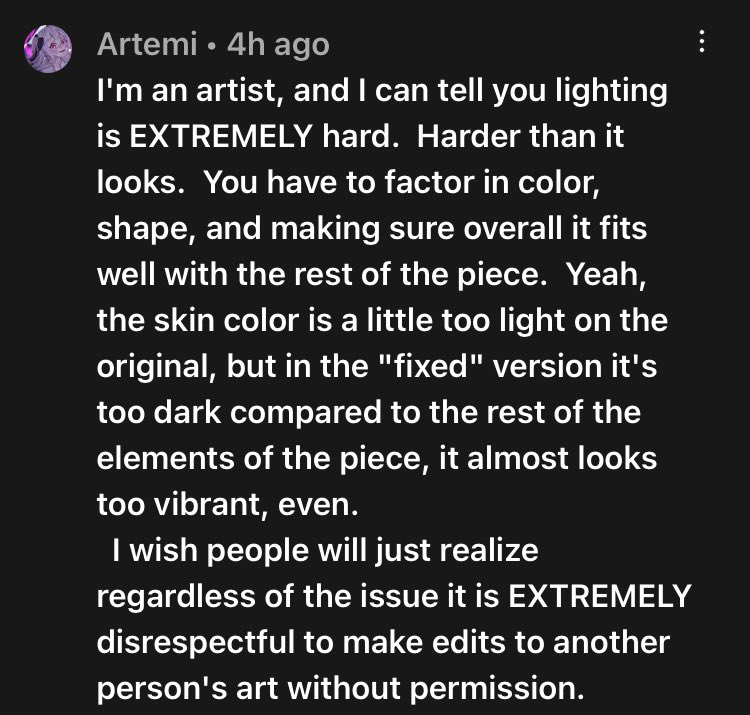