FaZe Clan player “Virus” has drawn ire after stating he did not share his team’s LGBTQ+ support, due to his Muslim religion. 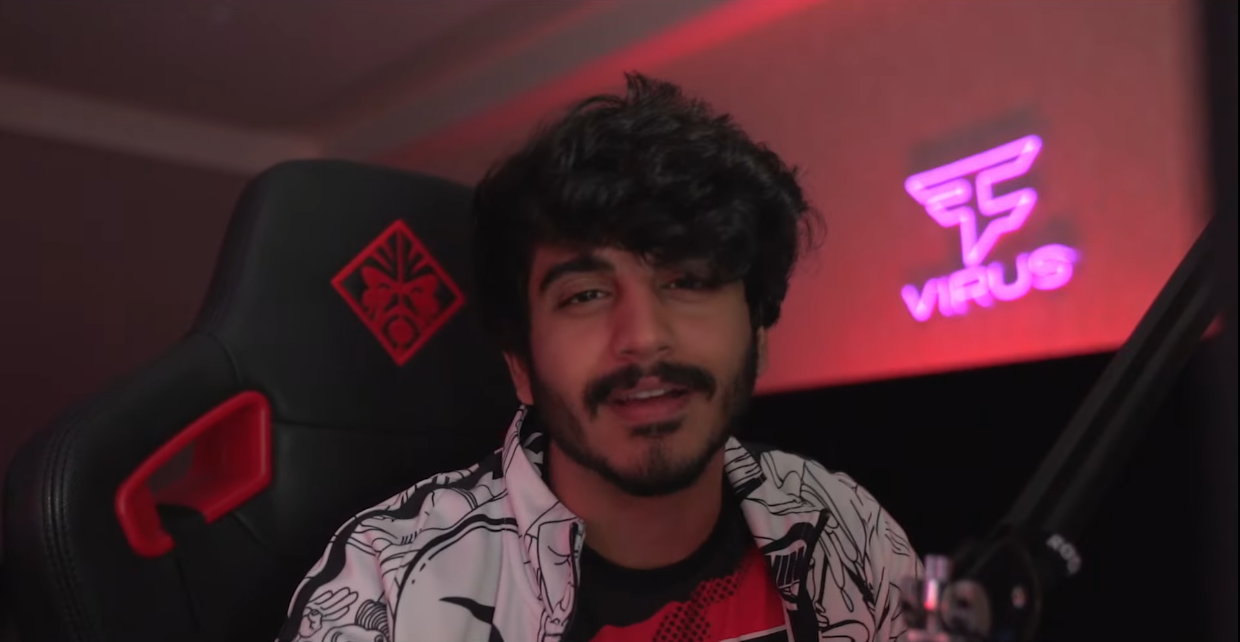 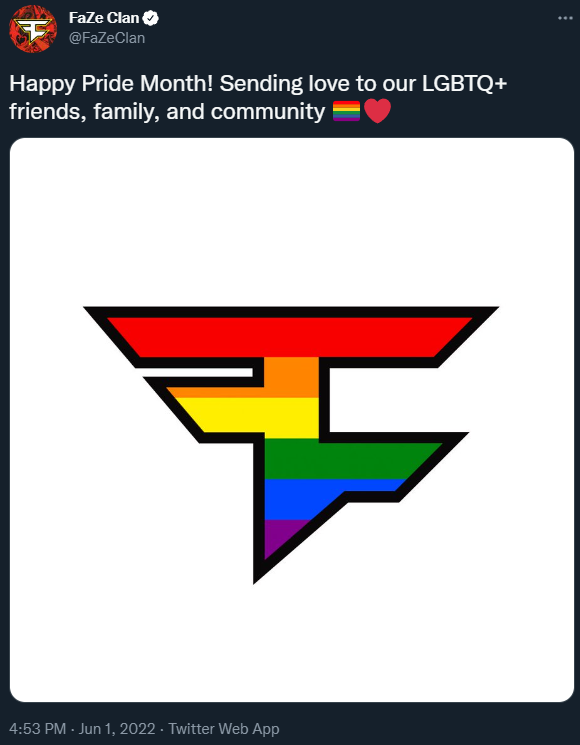 In a now deleted tweet, Talal Almalki- also known as ‘Virus’- quoted his own team’s tweet but added, “Just to clarify that I don’t support any kind of LGBTQ or anything similar even if ‘FaZe’ does. I’m a Muslim.” 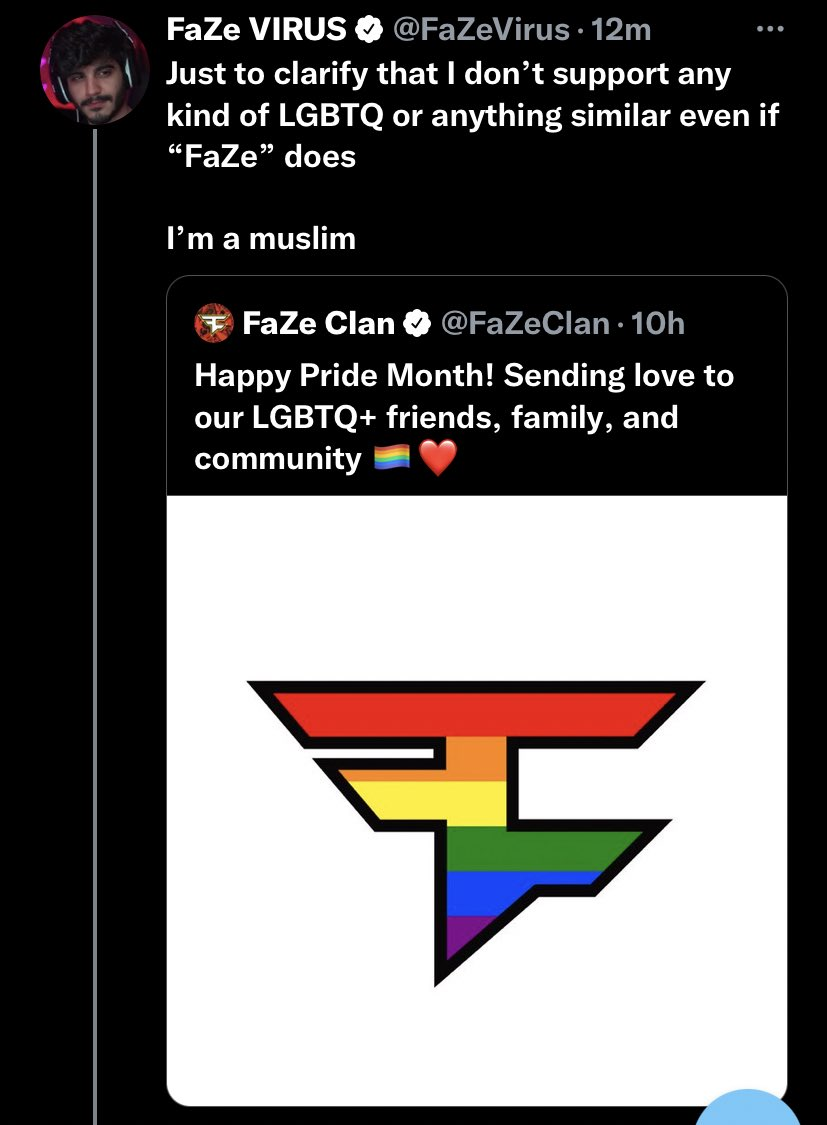 Some were offended by Virus’ tweet, while others defended his right to his opinion under free speech and his religious beliefs.

Kotaku reported it as “FaZe Clan Fans Rally Around Member Disavowing Its Gay Pride Post,” taking issue with those who defended Virus, even when they didn’t support what he said.

For example, one of many tweets against Virus’ announcement was @Deestinyer’s, simply stating “Wtf is this?” 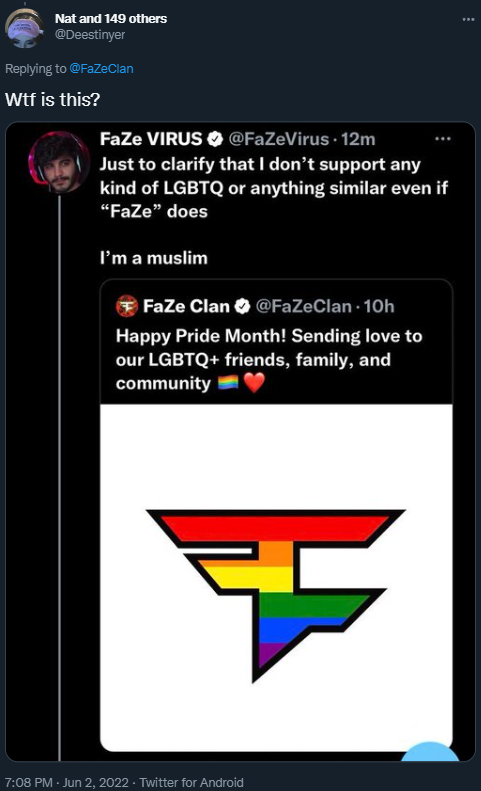 @MorganMcCabe19 replied, “I don’t agree with how he went about it, but it’s his religion and we have to respect it just like people apart of the lgbtq community should be respected. It’s also not like he maliciously said it.”

Regarding those tweets, Kotaku’s Ethan Gach stated “this shouldn’t be shocking to anyone who follows gaming, including the messy fandoms cultivated by its biggest influencers.”

“But it makes even the most mealy-mouthed show of support for things like Pride Month ring hollow when the influencers then stay silent on the antipathy generated and shared by their own fans,” Kotaku continued. 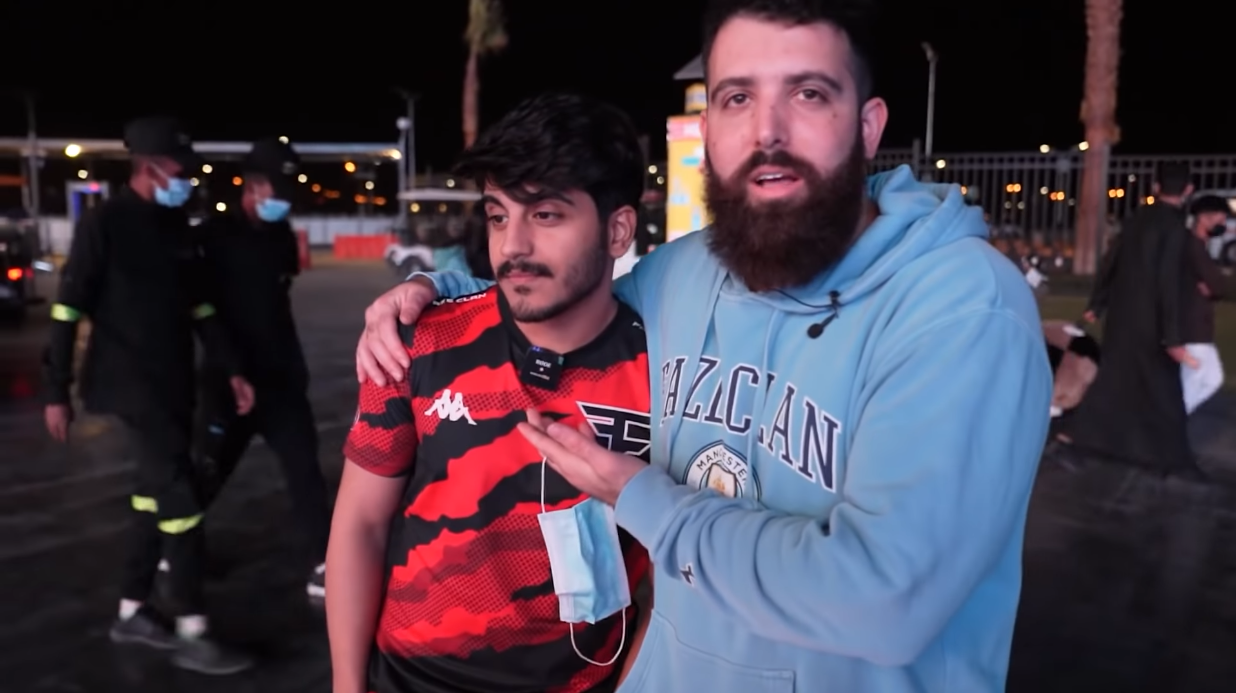 “Whether it’s ambient racism in the Twitch chat, or homophobia in the Twitter comments, silence can be interpreted as complicity,” Gach attacked gamers.

“How else to explain why so many apparent FaZe Clan supporters were surprised by its Pride tweet to begin with?” Gach questioned. 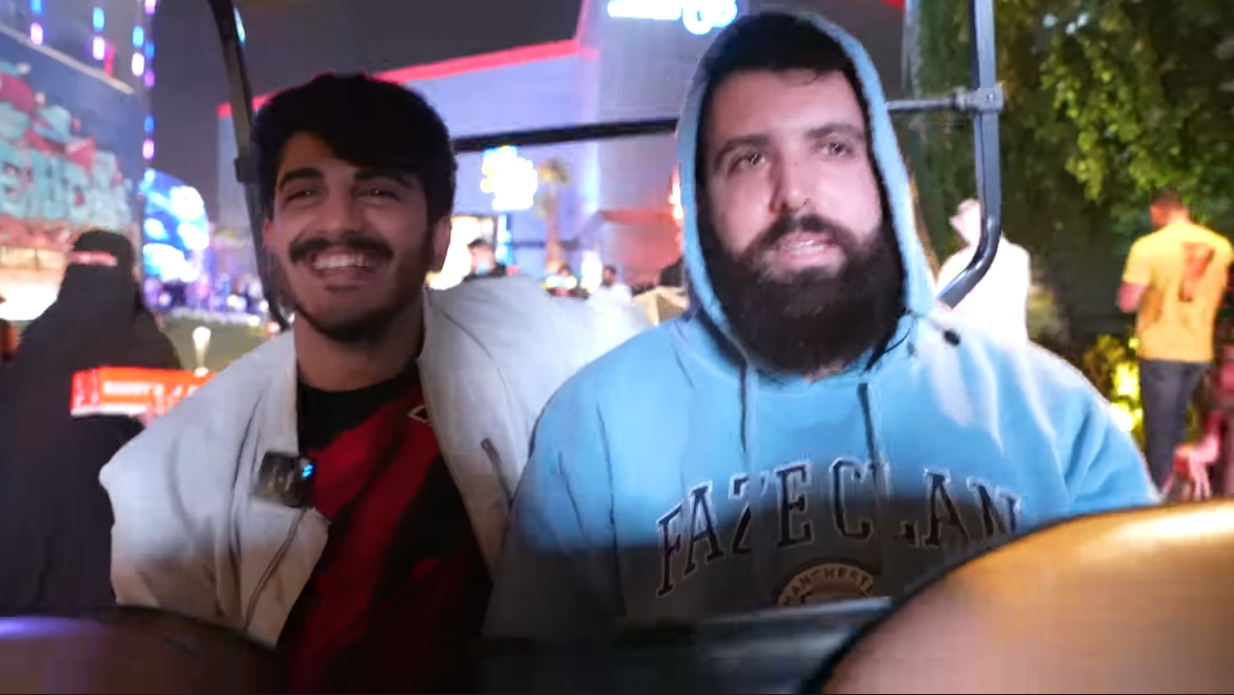 Kotaku and Gach wouldn’t be the only ones to target Virus. Twitter user @xKitzi initially called for FaZe Clan to “drop him,” later adding “doesnt have to get dropped* but it’s supposedly his opinions and beliefs and the tweet was deleted and he hides comments regarding it.” 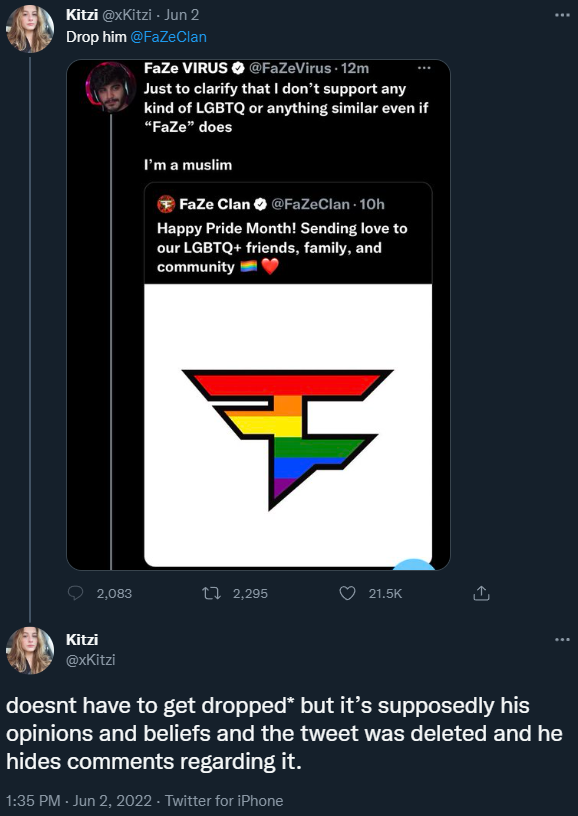 “i don’t think the replies understand that being lgbtq isn’t a choice and therefore not supporting lgbtq people isn’t permissible by using religion as a shield,” decried @uhhhhlangley.

“Religion should not be a crutch for homophobia,” denounced @HotCrabSex. “Faze virus should’ve kept his mouth shut”

Nonetheless, others did reject calls to cancel Virus. “So he can’t speak his opinion but yall can,” defended @ihyshon.

“Freedom of religion protects your right to follow your religion, it does not allow you to silence other human rights,” @Denzel_priv replied. “The rights of LGBTQ inherently surpass your right to reject them.”

Still others called for him to be cancelled.

“FaZe VIRUS should get kicked out,” demanded @Alpro_Soya5425. “If they actually care about LGBTQ+ people they’d give VIRUS the boot.”

“Just an FYI – It is absolutely not islamophobic to call out @/FaZeVirus for his intolerance,” OnlineDorian claimed in his own support. “Religious freedom doesn’t protect you from the backlash of your hate speech. Also, f–k you Virus, there are LGBT Muslims the world over, grow up.” 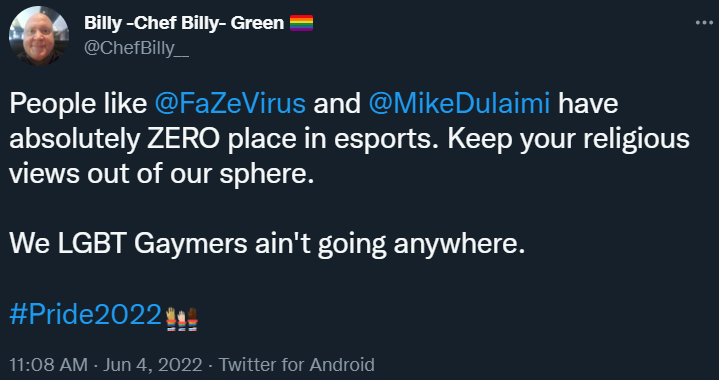 “Your religion can dictate how YOU live YOUR life. it shouldn’t be an excuse to be prejudice or bigoted towards homosexuality or other races,” criticized Lunezz1x. “Just drop this FaZe Virus guy from FaZe already. it’s against his religion TO BE GAY. not to respect people who’s choices don’t effect him” 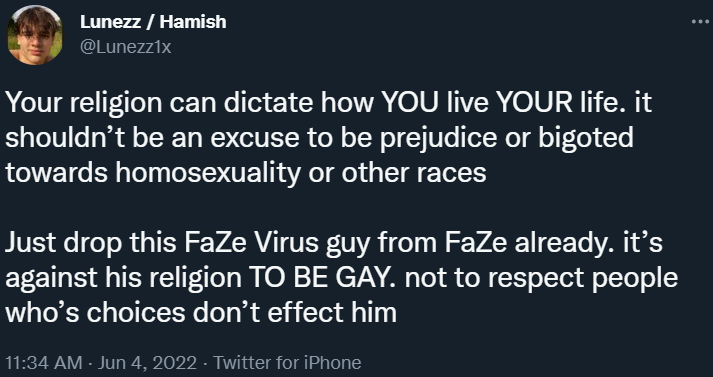 FaZe Clan previously had transgender player Soleil “Ewok” Wheeler on the team come out in 2021, before later leaving the team. Kalei Renay, a streamer who was signed onto the team, is also openly bisexual having come out in 2021.

Some on Twitter highlighted how Virus hadn’t left the Clan when LGBT members were present. However, it should also be noted Virus is typically a Call of Duty player for the team, and to our knowledge has not played alongside LGBT players on his team. 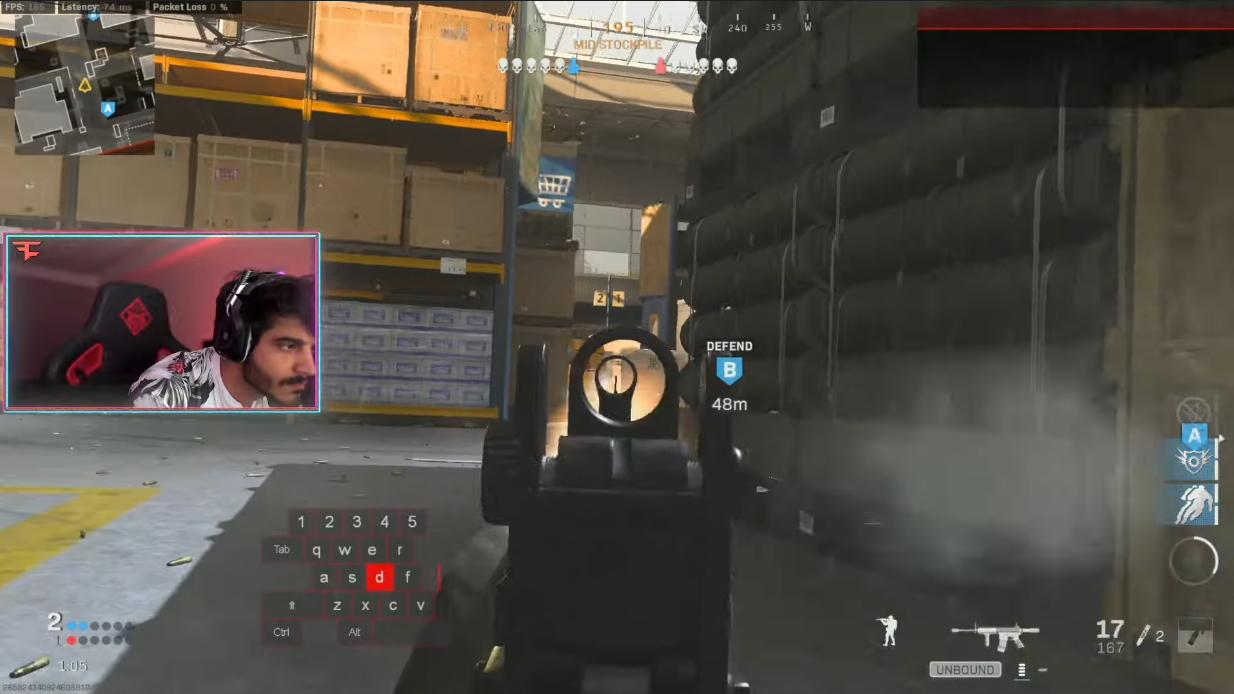