Letterboxd is no stranger to censoring opinions that they don’t like on their platform; opinions that are almost exclusively Right-wing. 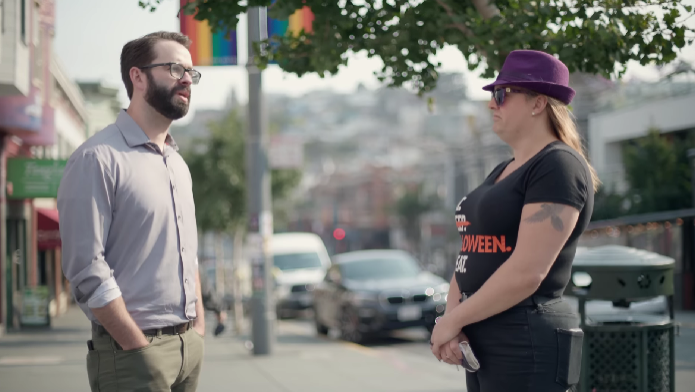 Nobody would know better about this than me, as someone who has been censored and banned by the platform on multiple occasions.

The movie that everyone is talking about, but nobody wants to review is the 2022 Matt Walsh documentary What is a Woman? As of this writing, the only mainstream critic who has reviewed the movie on Rotten Tomatoes is Christian Toto of HollywoodInToto. Virtually every other film critic, most of them progressives themselves, has unanimously refused to talk about the movie, because it was produced by The Daily Wire. 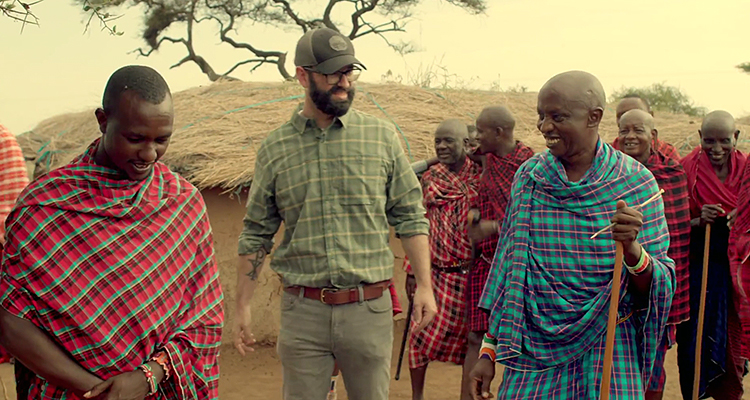 Matt Walsh recently posted the numerous reactions that he received from mainstream outlets asking if they would review the film, which he was promptly and firmly told to f*** off.

“What Is A Woman” is the most talked about film in the country right now and a smash hit. We thought film critics might be interested in giving it a look. Here are the responses we got back when we sent out the screener. They were less than enthusiastic it turns out pic.twitter.com/cHAQnVEBHV

Walsh posted a series of tweets on Twitter stating, “What Is A Woman? is the most talked about film in the country right now, and a smash hit. We thought film critics might be interested in giving it a look. Here are the responses we got back when we sent out the screener. They were less than enthusiastic it turns out.” 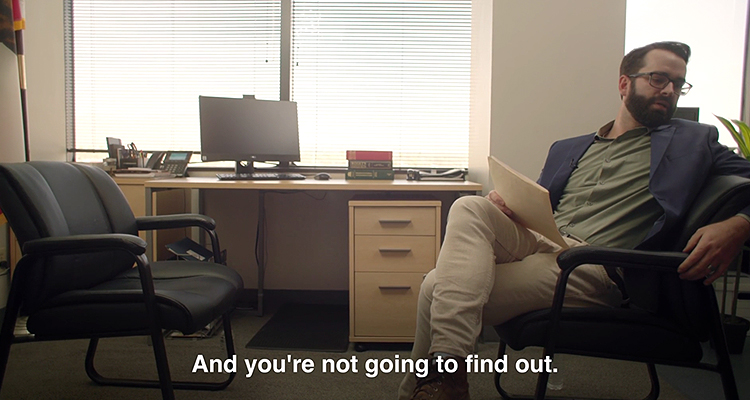 Walsh continued, “The Left can’t help but prove the point of the film. They are too terrified to even watch it.”

Letterboxd is a social platform that allegedly allows users to post and share their opinions about movies, whether new or old. However, social media users noticed that something was radically different about the review list for What is a Woman?… there are no reviews. 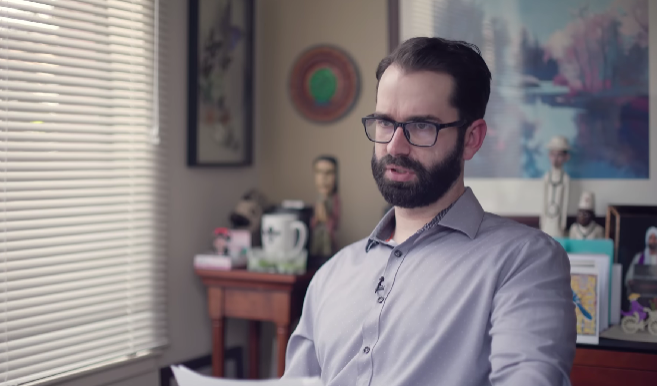 Letterboxd has hidden all reviews and ratings of the movie from public view. If you are not registered with Letterboxd, all reviews of the movie are completely hidden from sight, and the rating bar that is displayed to showcase the average score of a film has been removed. Unregistered viewers are unable to see any reviews for the film, both negative and positive.

If you are registered with Letterboxd, the site only allows you to view the reviews of people in your friends list, who have already reviewed the movie. If you go to the review screen as a registered user, it shows “no reviews” for the film, despite the fact that over 1,700 registered users have watched the movie as of this writing. 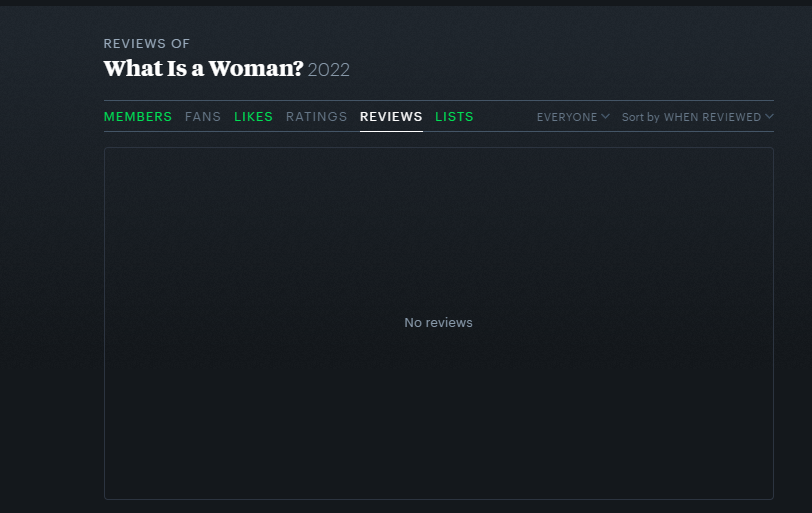 Source: What Is A Woman Review Page, Letterboxd

On the “Reviews of” page for What is a Woman?, you are only allowed to view the star ratings people have given the film, but you are not allowed to read their reviews of the movie unless you go directly to the users’ page and read their review. Every other movie on the site has the listed ratings page, recent reviews, and popular reviews shown without restriction.

Some users on the platform have actively calling out Letterboxd for censoring their opinions of the movie. 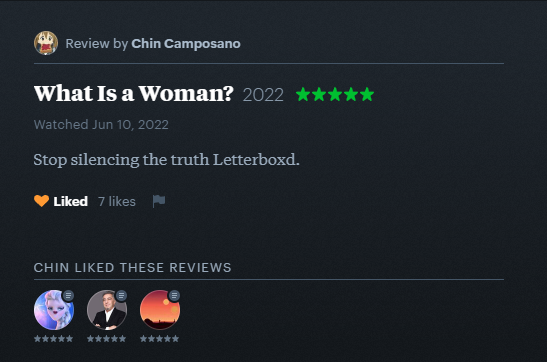 As mentioned earlier, this is not the first time Letterboxd has censored reviews on their platform. Back in 2019, my site Society Reviews was temporarily banned from the platform after submitting a negative review of the 2019 film Queen & Slim. After criticizing the lack of coherent storytelling, dreadful romance, and Black Lives Matter messaging of the movie, Letterboxd banned my account and removed my review of the movie.

At the time, Letterboxd claimed that my review promoted “hate and violence” and informed me, “Your account was removed from our service because several of your reviews were in serious breach of our community policy.”

“You must not use the service to promote, engage in or incite hate, violence, discrimination or intolerance, including based on race, age, gender, gender identity, ethnicity, religion, disability or sexual orientation,” their message added.

Keep in mind, I am a black libertarian who was basically told by Letterboxd that my review of a movie was “racist.” It wasn’t until Christian Toto and Bounding Into Comics covered the story on their platforms that my account was reinstated after falsely claiming they reached out to me to solve the problem. 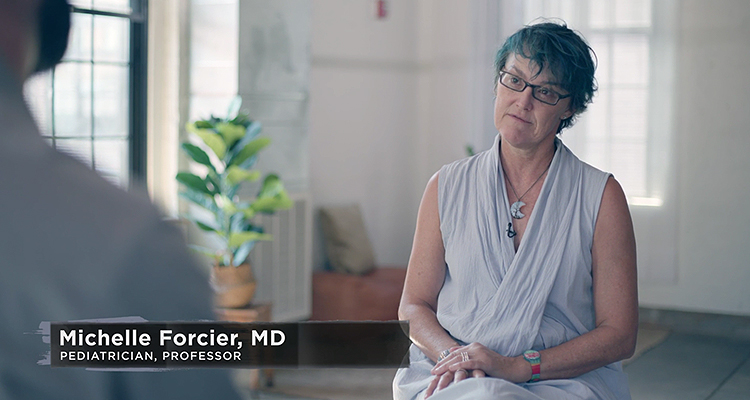 This would not be my last run in with Letterboxd. In 2020, the platform would once again censor my content when I wrote a review for the HBO Max film Unpregnant, a movie that was a pro-abortion response to the recent wave of heartbeat bills that banned abortion after a fetal heart bill of a child was detected.

After my review became one of the more popular reviews of the film, Letterboxd removed my review not once, but three times as I attempted to repost it on the platform. Each time the review was taken down after receiving positive feedback. 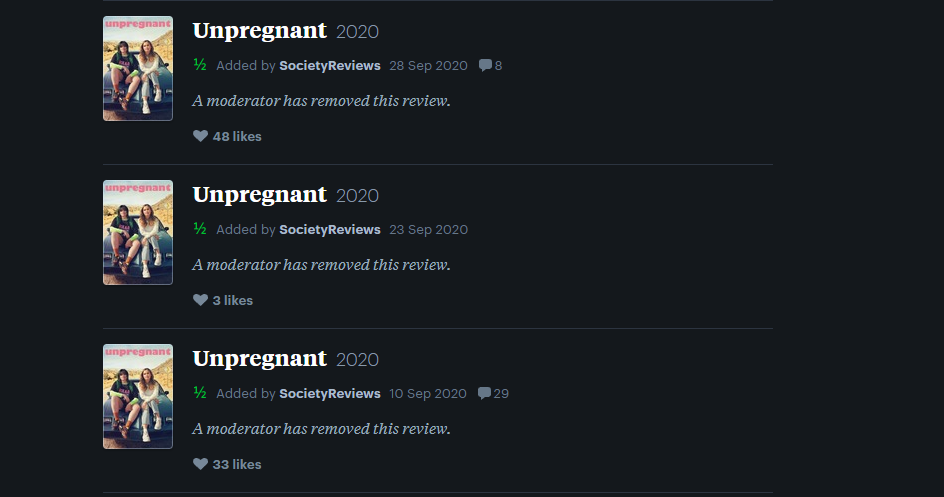 Both reviews of these movies remain on my site in their original writing.

It’s clear that Letterboxd does not want to profile any reviews for the Matt Walsh documentary that is currently available on The Daily Wire’s main page.

What are your thoughts on Letterboxd silencing opinion as a platform of that promotes sharing your taste in movies?

NEXT: Jurassic World Dominion Stars Say the Whole Series Was Feminist and Empowering To Women From The Beginning