With Netflix’s adaptation of Neil Gaiman’s Sandman confirmed to be race and gender-flipping certain characters, there are a lot of changes being made to the series in its jump from the page to the screen – and creator Neil Gaiman has a reasonable explanation behind the decision. 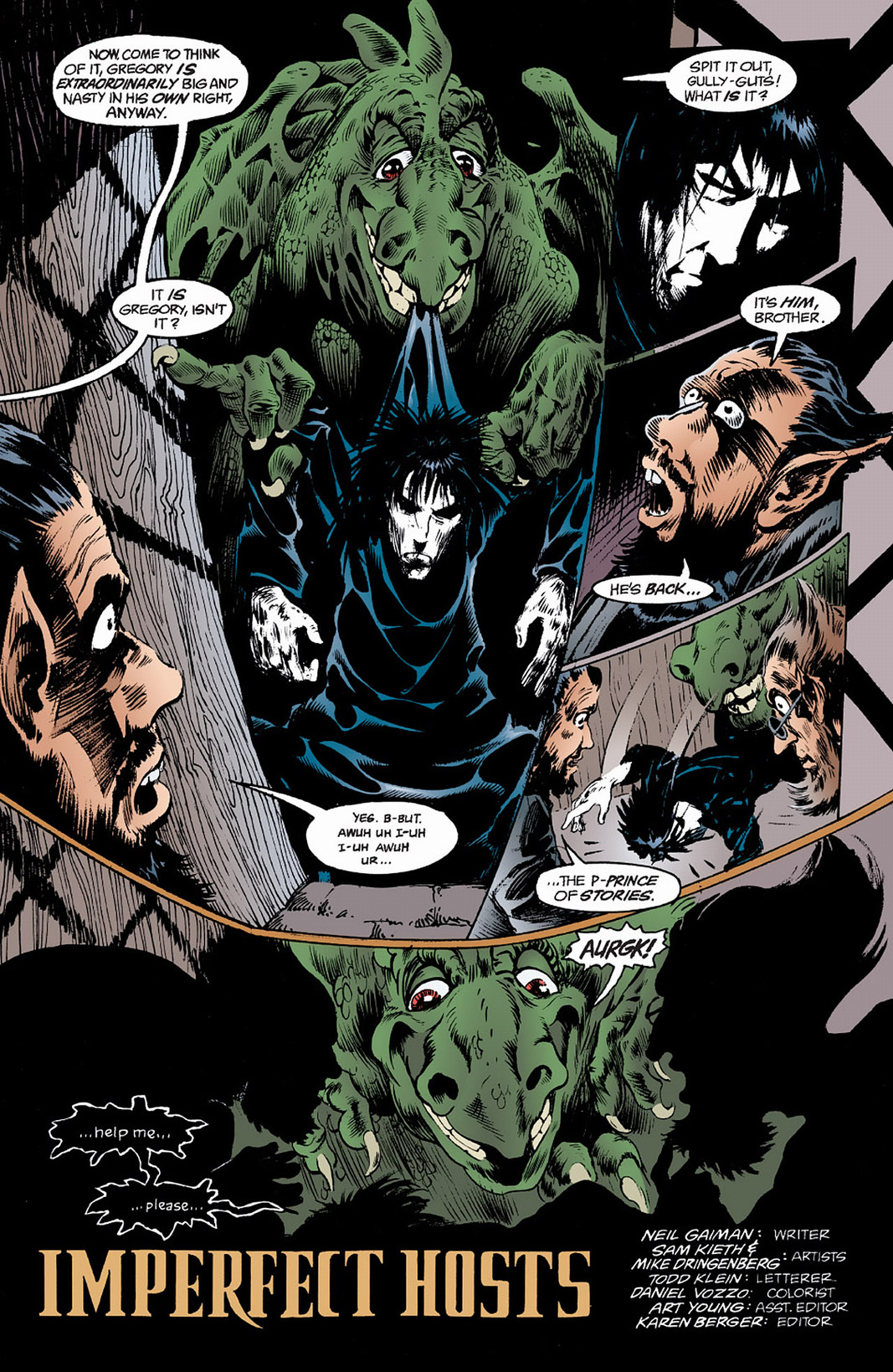 The author broached the subject of and why The Endless being depicted as more human compared to their bleach-white print counterparts on July 19th after sharing a preview photo from the upcoming series showing Tom Sturridge’s Dream sitting on a bench talking to Kirby Howell-Baptiste’s Death. 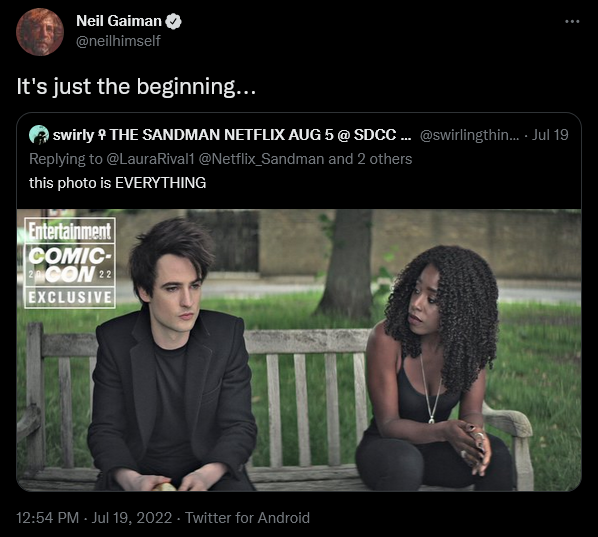 In response to his tweet, a fan queried the author, “Hey @neilhimself, can I ask you something? Is there some kind of a stretch effect on Tom that makes him look the way he does in this photo and in the snippets we’ve seen? I know he already looks like Morpheus (duh), but there’s something OFF about him in stills and clips.” 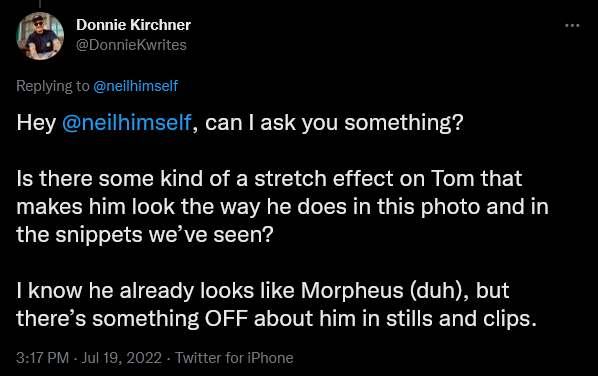 “No,” replied Gaiman. “Everything about Morpheus is 100% unenhanced Tom Sturridge (including the musculature and body shape when he’s naked in episode 1). The only CGI on his face is very occasionally giving him Morpheus eyes, but you haven’t seen any of those in any photos released so far.” 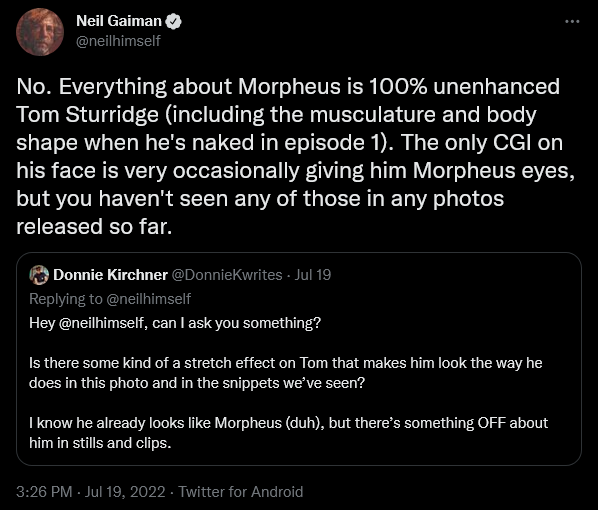 The authors initial response then drew another question from a separate fan who further inquired, “Was it a creative decision not to give him Morpheus’ paper-white skin as well? Or is that also going to appear occasionally?”

To this, Gaiman explained, “We started out with a snow-white Morpheus with all black eyes and huge black hair. Tom looked like someone cosplaying impressively, not like someone who would be able to walk the waking world more or less unnoticed.”

“So we pulled back until it worked,” he added. “And yes, sometimes he’s pale.” 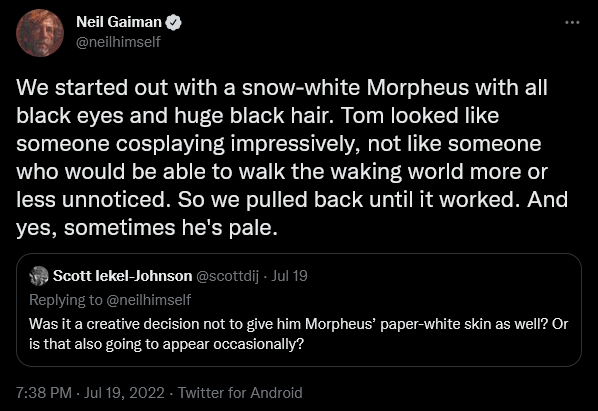 Notably, while Sturridge’s pale appearance has been demonstrated in the teasers and trailers for Sandman, it’s unclear whether that’s due to the actor’s natural complexion or a combination of intentional lighting and color correction.

For instance, said pale appearance can be seen in the series’ new trailer, which debuted over the weekend at the 2022 San Diego Comic-Con.

Packed with a number of first looks at the series’ cast, including Boyd Holbrook as The Corinthian, Jenna Coleman as Constantine’s ancestor, David Thewlis as the deadly Dr. Dee (for Destiny), and the aforementioned Howell-Baptiste as Death, the 2-minute-plus clip revealed not only Sandman’s high-contrast, light-and-dark visual direction, but also its serious tone.

To that end, latter sparked more than a few fears that even further alterations to the source material, such as a removal of Death’s celebrated sense of humor, were incoming.

The Sandman. (L to R) Kirby Howell-Baptiste as Death, Tom Sturridge as Dream in episode 106 of The Sandman. Cr. Courtesy Of Netflix © 2022

However, met with such an apprehension by a fan on Twitter who asked, “I’ve noticed that the scenes shown so far with Death have been from instances where she is somewhat serious. I’m curious, will Death in the Netflix Sandman series have the bubbly personality of Death from the comics? Or is that totally changing?”, Gaiman allayed any fears regarding the character’s personality.

“She’s absolutely the same Death in the comics,” he said, explaining that the trailer was cut to convey a certain tone and doesn’t reflect the series in its entirety. “The nice people who choose the bits that go into trailers have found the most serious bits they can.” 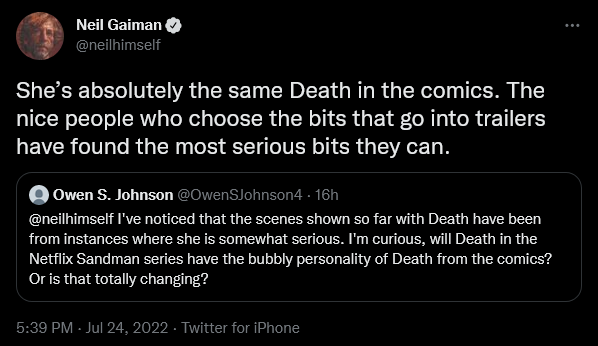 The Sandman and all its “serious bits” dare to “Dream Dangerously” on Netflix as of August 5th. Leave a comment if you plan to watch.