Alleged leaks for upcoming JRPG Pokémon Scarlet & Violet continue to pour out, and fans have continued to sift through them. 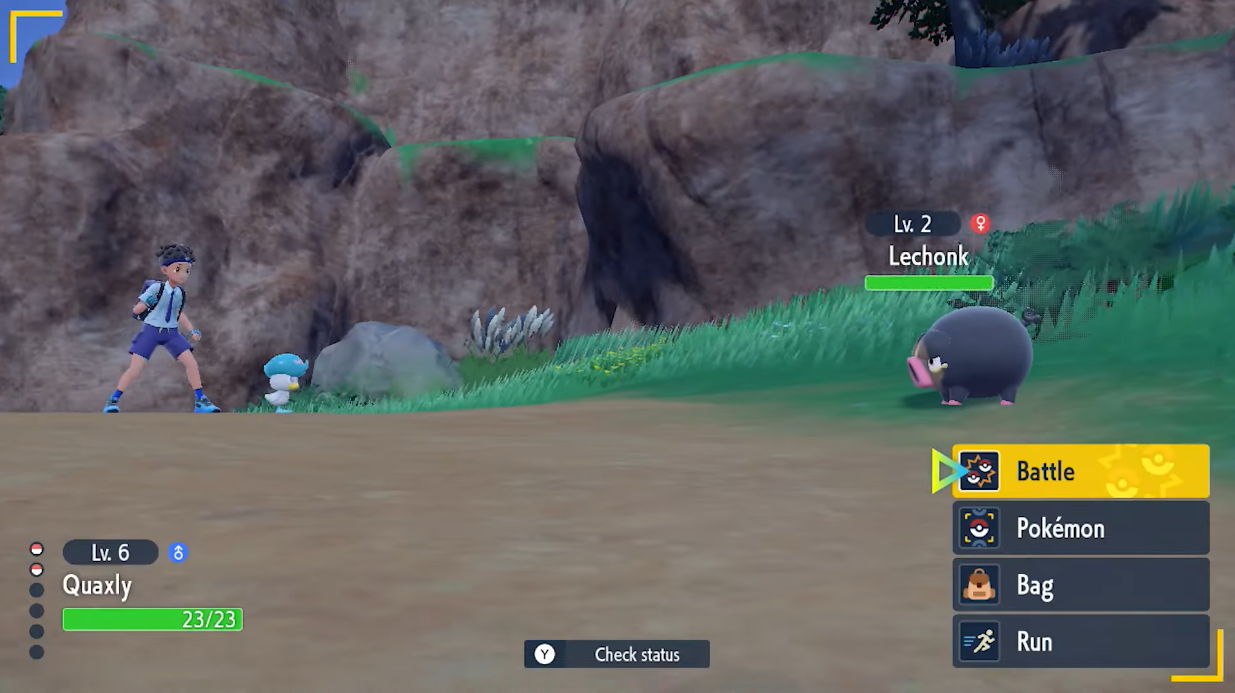 @CentroLeaks is a Twitter account dedicated to recapping alleged leaks on upcoming Pokémon games, from both somewhat trusted social media accounts and sources that spoke directly to them.

To summarize our prior coverage, the claims include final stater evolution types, and heavily redacted images of two them and their design inspirations. We’ve also had descriptions of unrevealed Pokémon, such as a coin, a hammer wielding creature, a mouse tooth fairy, a Japanese-culture inspired bug, a dolphin, and a flamingo, as well as evolutions and regional forms for existing Pokémon. 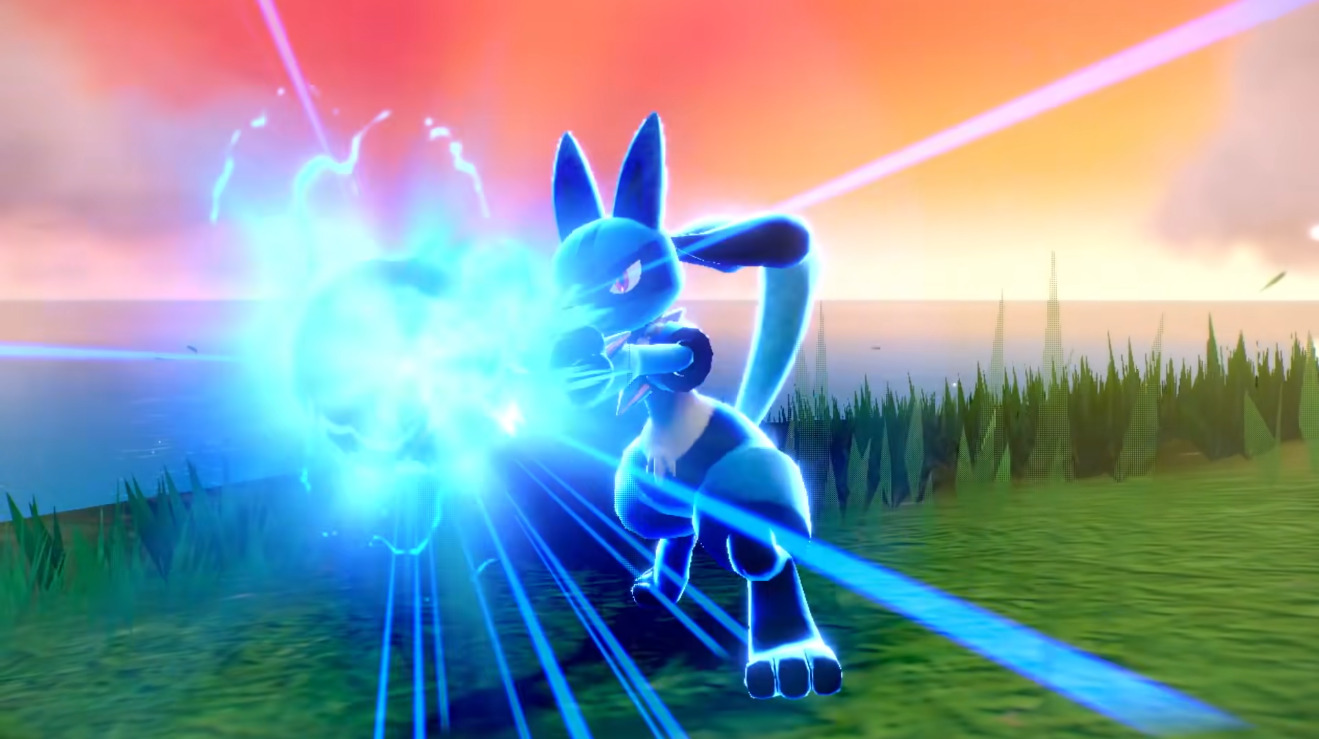 Two of the games’ features also include futuristic or ancient forms of Pokémon along with”RFakes” — resembling an existing Pokémon like a regional form — but all of these having their own name and Pokédex number. Players can also use “crystalization” in battle so their Pokémon can deal extra damage with certain types of moves. Mega Evolution and Dynamaxing will not return.

The new region may be called Paldea, Gyms may be tackled in any order (though there is no level scaling), there could be three “routes” or quests to get the games’ ending. Players will allegedly have classes, exams, and interviews; with school uniform-inspired character customization to match.

Overworld shinies are said to be returning, players will be using box legendaries Koraidon and Miraidon as transport instead of the traditional bike, fishing allegedly being removed, an auction house and Pokémon soccer minigame, and a controllable in-battle camera as with Pokémon Legends: Arceus. 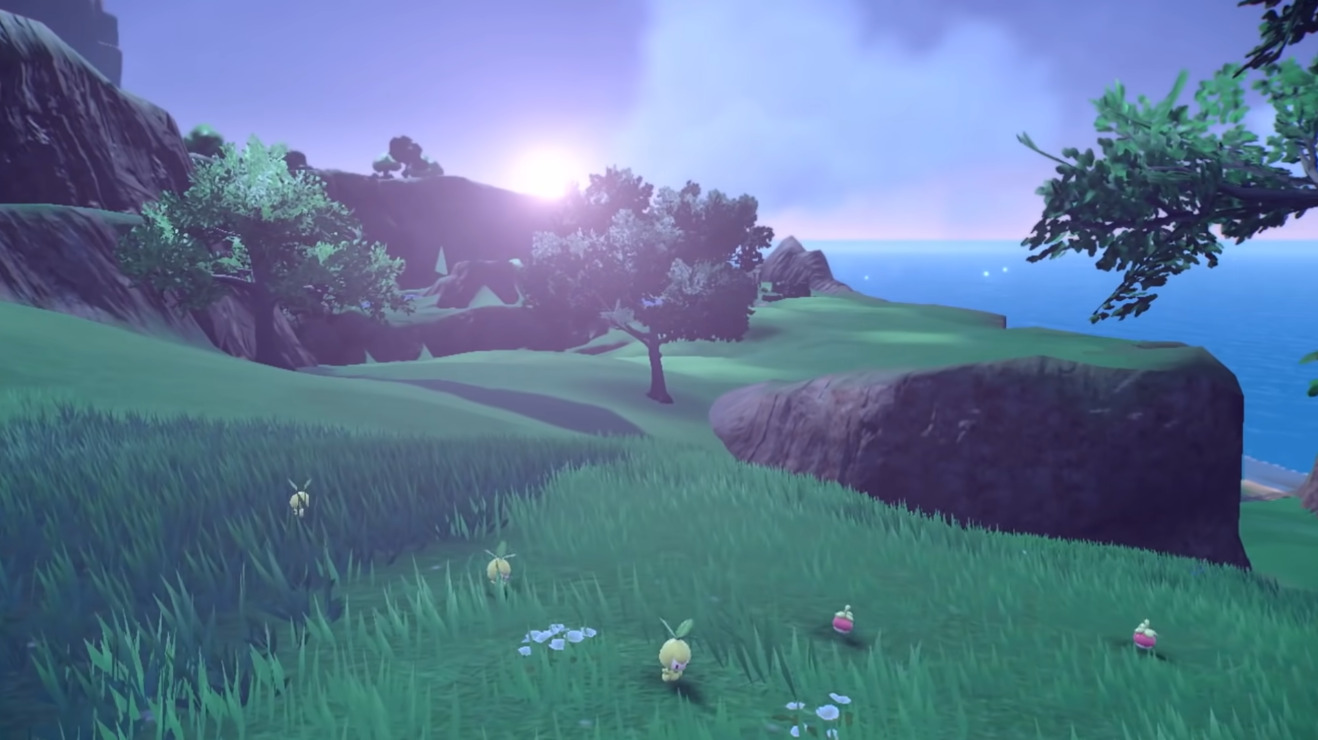 Leading with the sixth part of numerous leaks, @CentroLeaks reiterated “Pawmi’s evolution is Electric / Fighting,” seemingly confirming a previously leaked screenshot showing this Pokémon as a bipedal rodent with thick forearms and an anime protagonist-style haircut.

@CentroLeaks also claimed “Smoliv evolves into an olive tree,” and “Fuecoco’s evolution is NOT bipedal.” The latter is seemingly a sticking point with some fans, worried or interested whether some starter Pokémon will end up looking anthropomorphic as Litten did with Incineroar.

@CentroLeaks also claimed “There’s no third legendary this generation.” This would be consistent with prior claims there would be DLC; much like the Sword & Shield’s Isle of Armor and Crown Tundra expansions. While this wouldn’t necessarily prevent a third Legendary Pokémon to make up a thematic trio (as some past box legendaries had), this was not the case with Sword & Shield.

In addition, @CentroLeaks alleged “Tauros new form is black.” While there had been prior claims of a regional variant for Tauros — a bull Pokemon in a Spain-inspired region being almost a given — a fake image of the alleged Tauros was previously reported on (also with black fur).

“Ok this might be very disappointing for some,” @CentroLeaks prefaced. “According to the leaker, Wooper and Tauros are the only two new Regional Forms.” Previously, @CentroLeaks had stated that as the ancient and RFake Pokémon had their own names and Pokédex numbers, this technically meant there were more new Pokémon introduced than in other recent titles.

While they added “There are 8 to 9 Ancient Species,” @CentroLeaks soon after issued a correction, declaring that “the leaker replied to a person who was asking about FUTURE SPECIES, not ancient. That’s the first time the leaker has mentioned future forms. We don’t know if the leaker is referring to both Future and Ancient Pokémon as a group.” 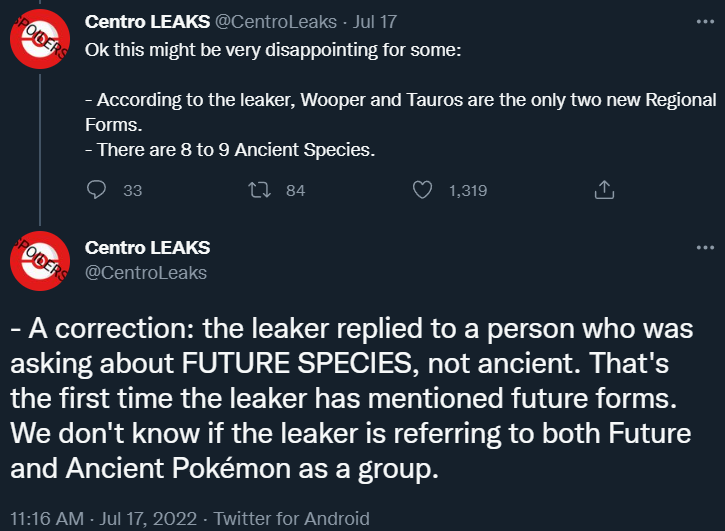 @CentroLeaks then makes the jaw-dropping claim that “There are 120-140 new Pokémon. This includes the Ancient/Future Species.” For comparison, the largest number of new Pokémon added to a game — even when considering regional forms, Mega evolutions, and Dynamax forms — is Pokémon Black & White with 156 in-game Pokémon; all of which being brand new.

With recent generations only adding around 100 new Pokémon, this writer harbors doubts over the claim. For example, this may include Pokémon changing their appearance when using the crystalization mechanic, though those would not be outright “new Pokémon” as claimed.

While previously unsure on the claim, @CentroLeaks once again stated “Ancient / Future Pokémon Species can’t evolve.” Those previously shown to have other forms in leaked images include Jigglypuff and Amoongus suggests their evolutions and prevolutions may neither have ancient or future forms nor act as stand-alone Pokémon.

“There’s a new samurai Pokémon,” @CentroLeaks alleged, before noting, “the old leaker previously mentioned [a] Japanese-themed bug, so could this be it?”

However, they later stated, “The leaker is hinting that Bisharp gets an evolution, but not confirming it for now. (could it be that the samurai is actually Bisharp’s evolution?).” Bisharp and its prevolution Pawniard are inspired by Chess Pieces, so a samurai motif would be a surprising change. Then again, this species utilizes sharp blades, and it may be a more Japanese take on the Rook, Knight, or King pieces. 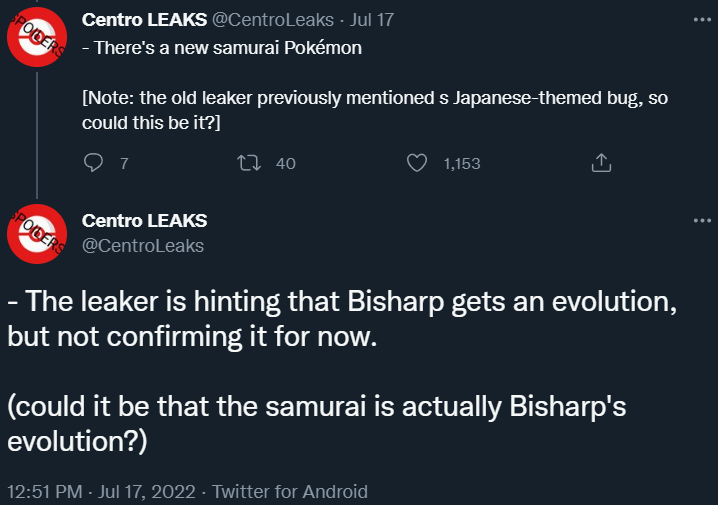 After briefly discussing one of the supposed “new Pokémon with a hammer is pink,” @CentroLeaks clarifies that “Pawniard gets a new evolution (not Bisharp apparently),” adding that “Primeape gets an evolution.” 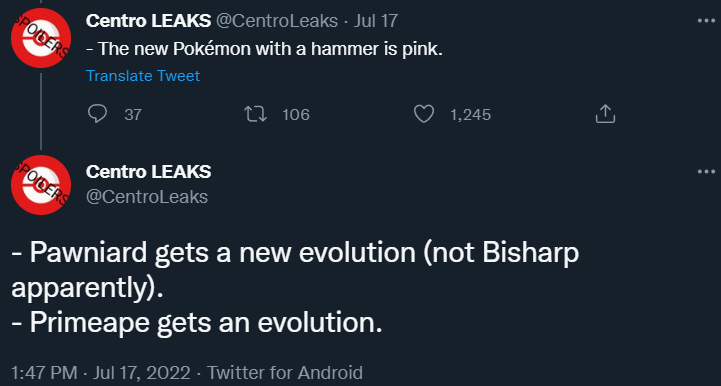 Besides claiming “Misdreavus gets an Ancient Species,” and “Delibird gets a Future Species,” @CentroLeaks alleged that — along with the aforementioned “coin” Pokémon — there would be “A new ghost dog Pokémon,” and “A new fairy Pokémon. 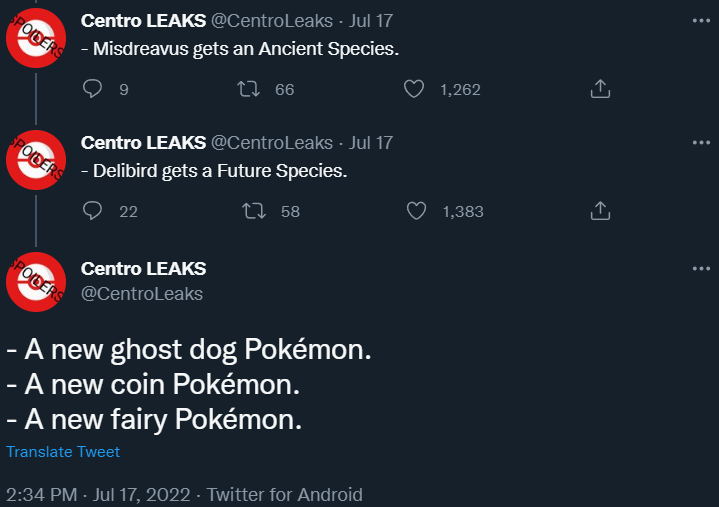 @CentroLeaks noted that “Regarding ‘Future Species’, we don’t know wether [sic] they exist yet, we don’t have a leak for them yet, though we think it’s likely they exist (it makes too much sense for them to make Ancient Species exclusive for Scarlet and Future Species for Violet).”

@CentroLeaks’ sources also claimed, “There’s a new bike Pokémon (that is not Koraidon / Miraidon).” There have been Pokémon based on man-made objects, such as the gear-like Klink, or the Pokéball based Voltorb line, so living creatures based on a bike may not be so absurd.

On the one hand, this may be in reference to how players will not be getting a bike if Koraidon and Miraidon are assigned this particular function. On the other hand, it may suggest players ride this Pokémon before acquiring Koraidon or Miraidon. If so, this could suggest there is another Pokémon that will act like a bike (much like the Poké Ride mechanic in Sun and Moon, using Tauros and more) rather than a Pokémon designed to look like a bike.