Hot off of our recent interview with Japanese industry video game developer @Haru47 on the escalation of loli censorship, the Naive Angels on Japanese Twitter have taken issue with a promotional image for an upcoming Love Live! exhibition. 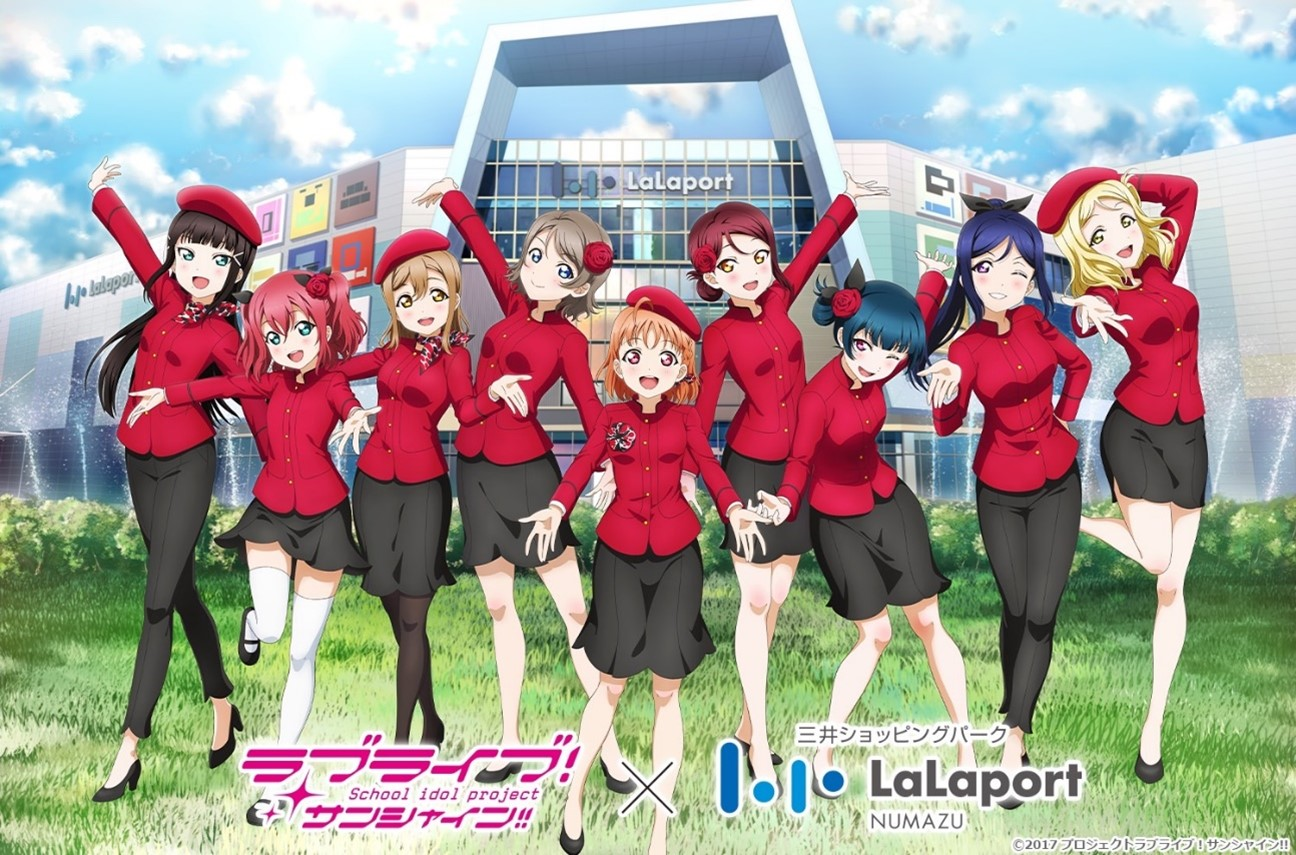 Set to take place between July 25th and 28th, the collaboration will see the mall host a variety of Love Live!-themed offerings, including an exclusive pop-up shop, musical performances, and fan meet-ups. 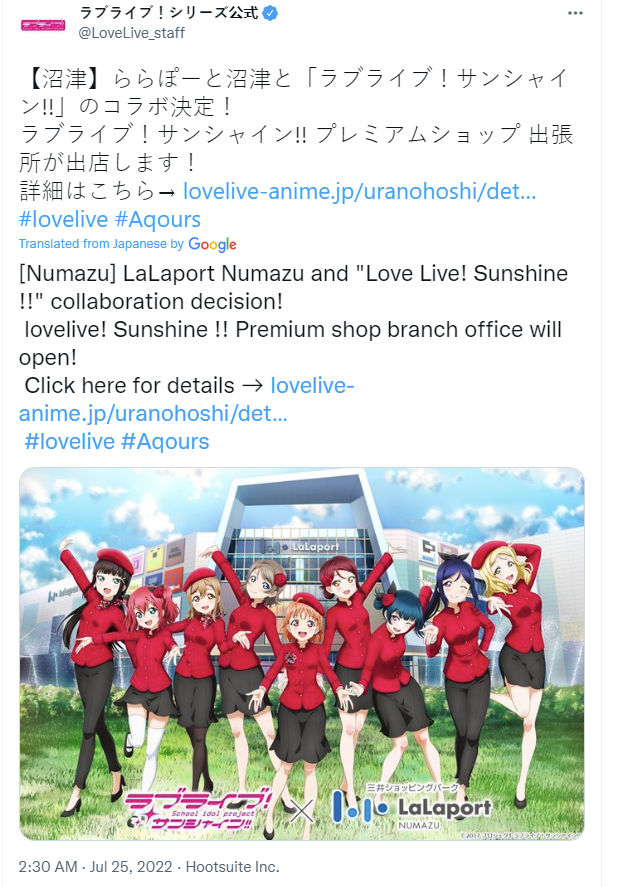 For the first 24 hours after it was published, the majority of replies and retweets to the Love Live! account’s announcement saw fans expressing unbridled excitement at its reveal.

However, on July 26, a full day after it was posted, the tweet caught the attention of the Japanese outrage mob, who quickly took issue with the ‘tightness’ of the girls’ skirts and pants. 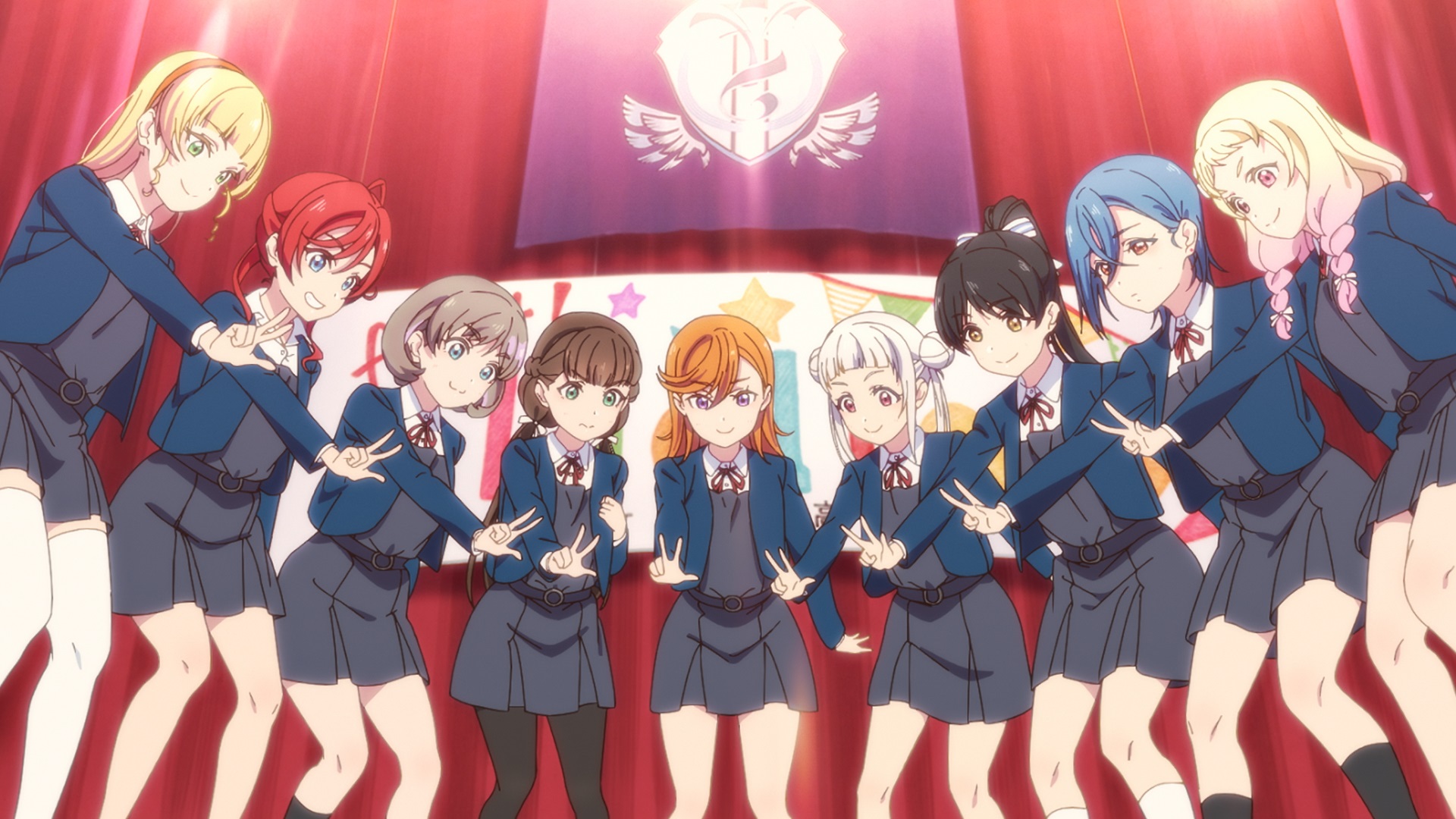 One of the first users to spark the firestorm was @_shirokuma_cute, who in a quote tweet observed, “Man, Love Live! is sucking the skirts into their crotches…They never learn, do they? ^^” 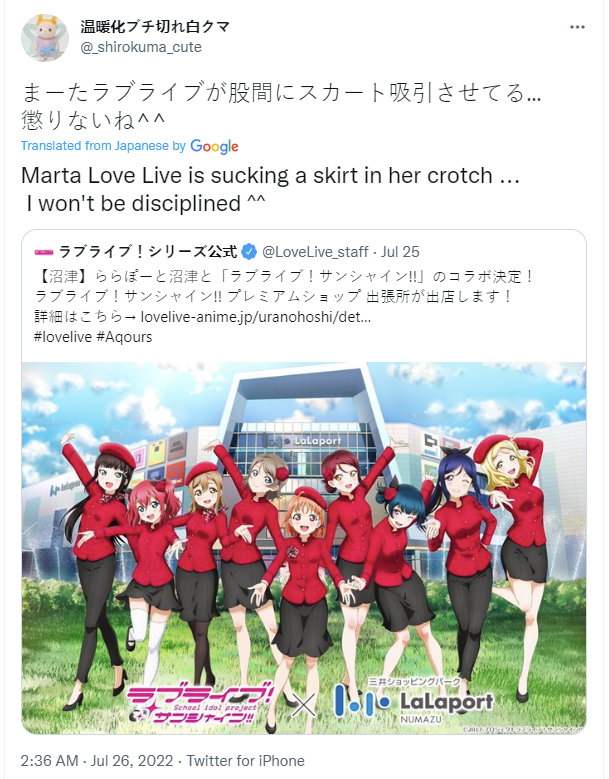 “Is the crotch suctioning the skirt again?” @adhd_sf likewise critiqued. “I guess only such symbolic expressions can give a three-dimensional impression.” 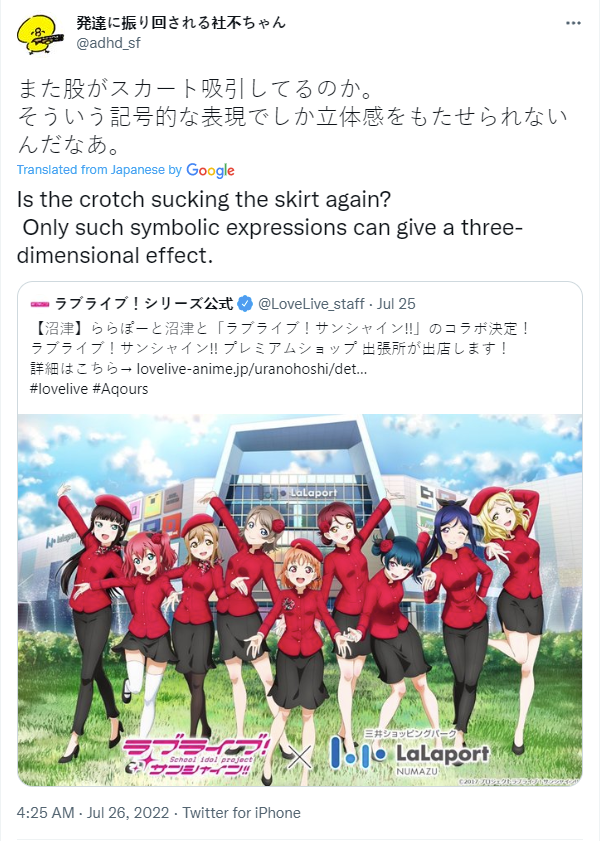 @ooogggqqq took particular issue with the girls’ chests, asserting, “The stain on the lower chest area, I know it’s supposed to be a shadow, but it doesn’t look three-dimensional at all, it just looks like a stain.” 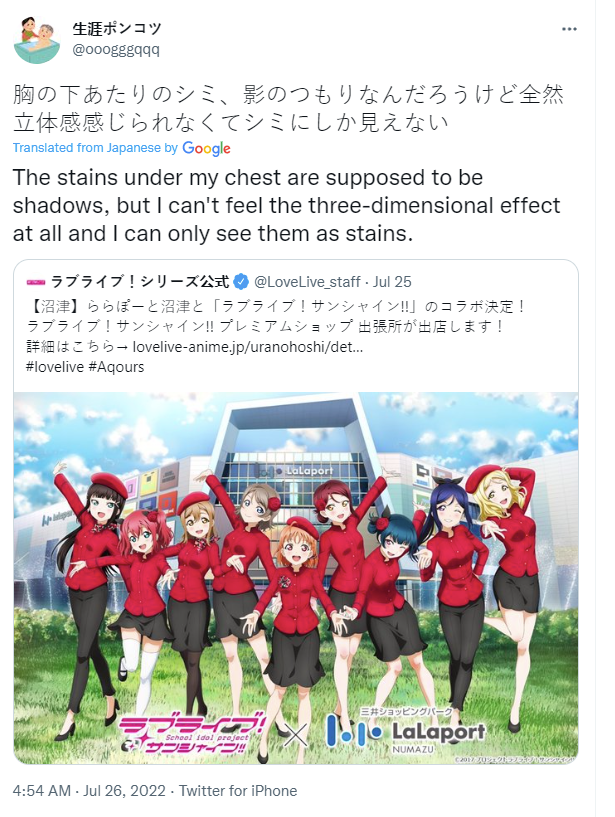 The next day, the QRTs became an inferno of outrage, with common keywords used by critics including “groin”, “suction”, and “Dyson.” Similar to other outrage campaigns, this campaign appears to have been boosted by a large number of bot accounts.

“The shadows between the legs were so bizarre I thought they were all transparent.” @kikitubuyaki tweeted. “If you want to show the shape of your crotch, you should be wearing pants style, not a skirt.” 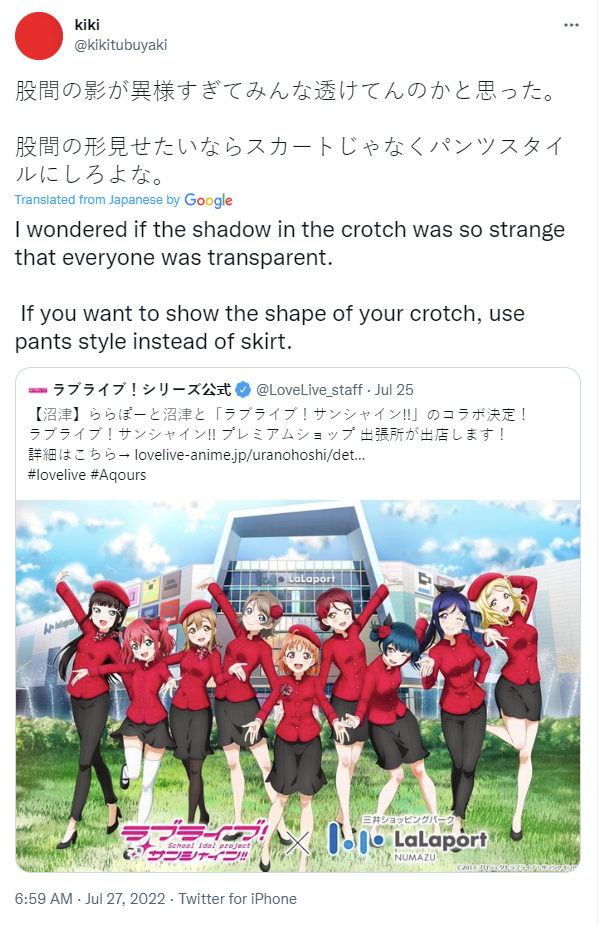 @akmm2020 requested, “I wish people would stop publicly distributing pictures like this that exude an abnormal form of sexual desire.”

Quoting scolds concerned with the possibility that “‘Love Live will become a content that obsesses over women’s crotch'”, the user declared, “It already is.” 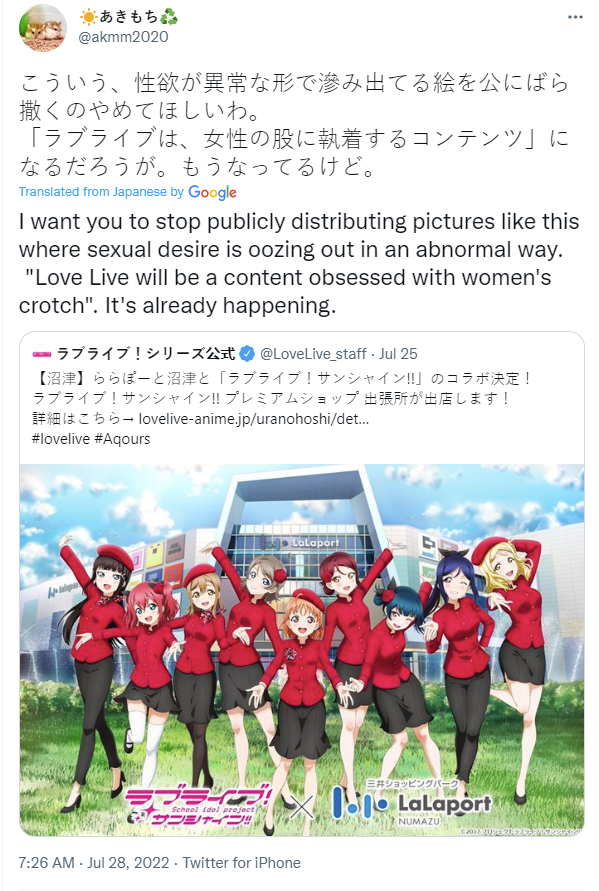 @kazunoko_louise found themselves outright disgusted by the promotional art, writing, “That’s a nauseatingly dirty picture. I wish I could just shove it in the cartoon shop.” 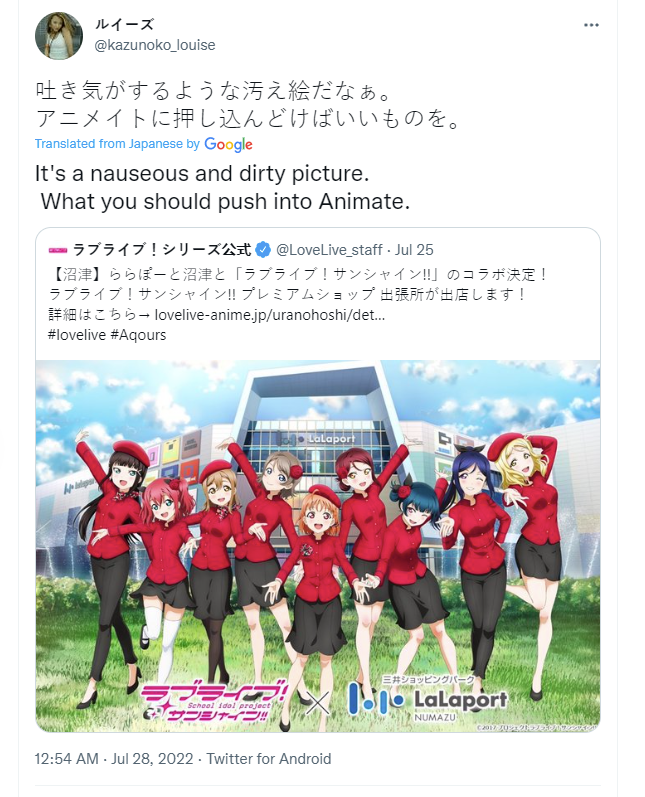 @RVaiQW3767Sj5Sd agreed with @kazunoko_louise, replying, “Really. All these moe pictures are sticky and smell like sweat. I don’t want to see them in the city because they destroy the scenery.”

“These are just my thoughts,” they added. “Opinions are a part of personal freedom.” 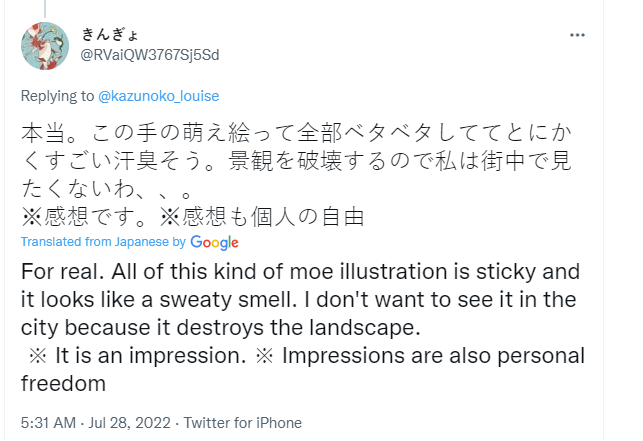 “To put it simply, it is tacky.” @kazunoko_louise responded. “If children who grow up surrounded by such things come to like tacky things, the town will become tackier and tackier, and I don’t like that.”

“I think this is a serious problem because children will not develop a sense of style unless the town is fashionable enough to keep otaku away from it,” she said. 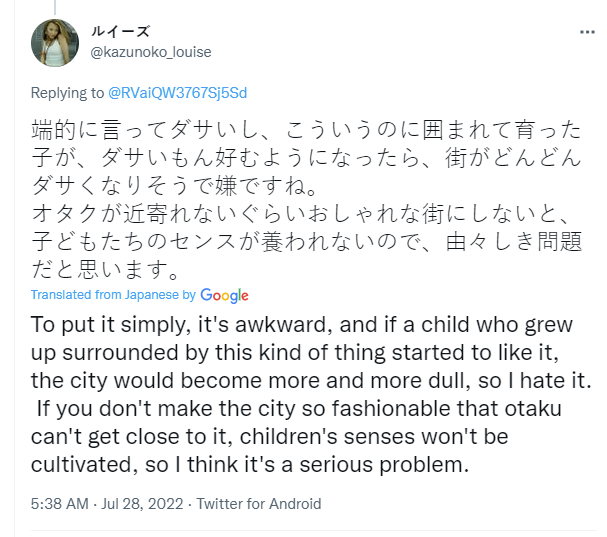 @an_eternity86 opined, “I often go to Lalapo in Numazu to eat and buy daily necessities, but I’m afraid of the ‘harmless otaku’ so I stay away from them during this period.”

“I used to like this anime,” they added. “But I’ve become allergic to it because of the constant threats, slander and slander from people who use these anime icons. It’s sad, but I can’t help it.” 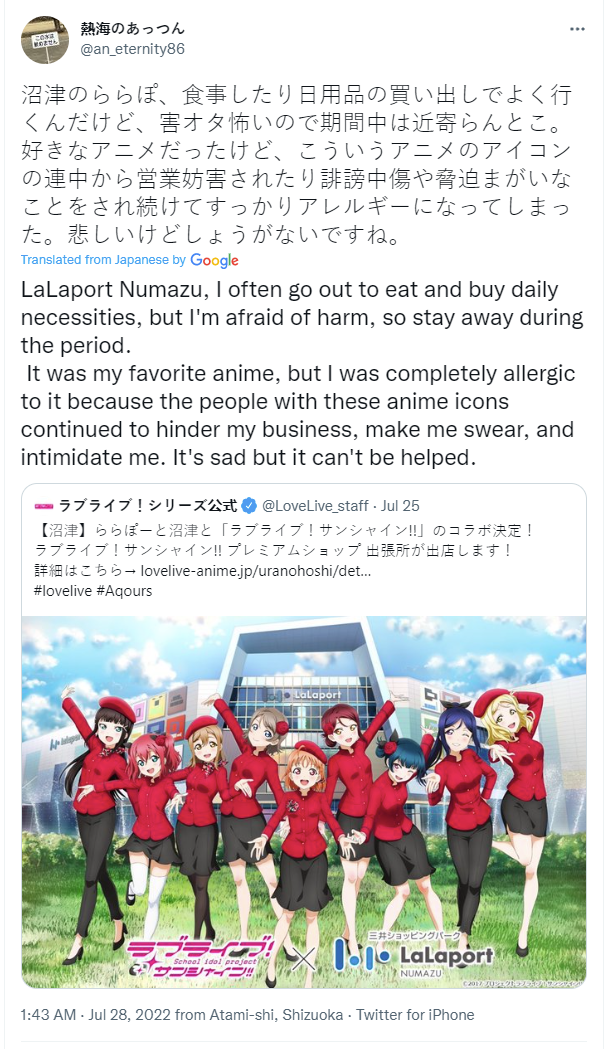 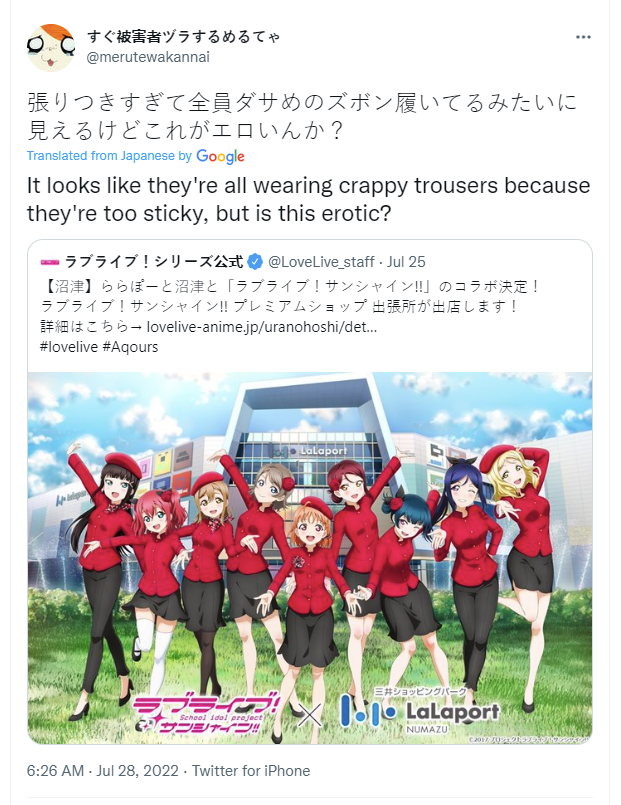 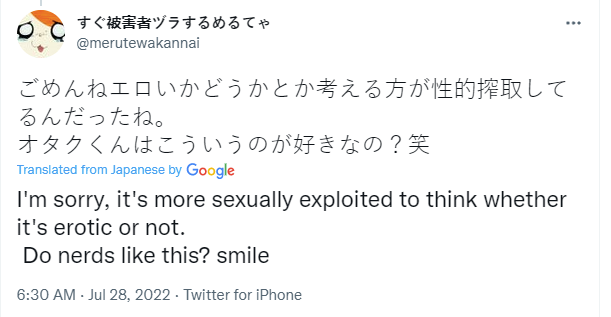 Perhaps most bafflingly, @online_checker found that their outrage was based on the fact that “It is the symbolic image, [as] in Japan, girls are frequently dealt sex slaves.” 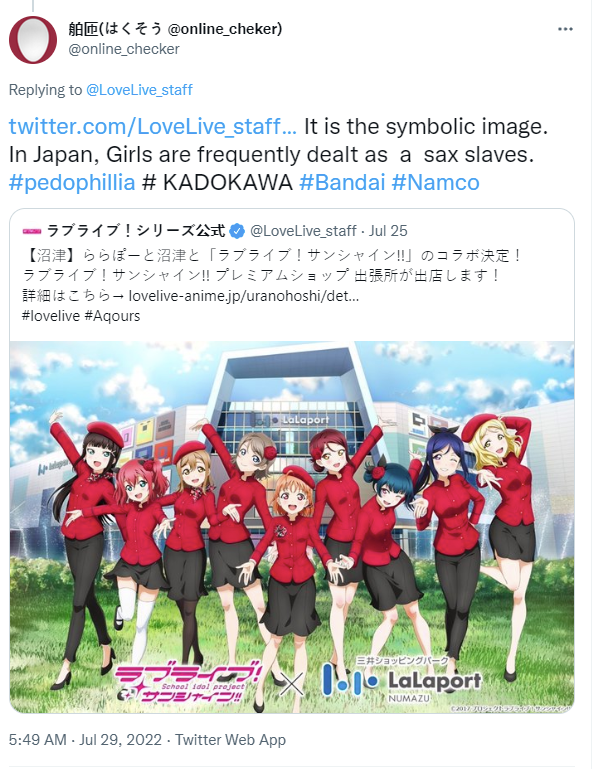 Interestingly, however, it appears that the somehow-controversial image isn’t new.

As pointed out by @rock_54, “the illustration for this collaboration is a reuse of the same pattern used in the Lalaport Numazu floor guide and Village Vanguard original goods in October 2019, when Lalaport Numazu opened.”

As of writing, neither the Love Live! production team, Bandai Namco Filmworks, or LaLaport Numazu have publicly responded to these complaints.