As anime has become more mainstream in recent years, more and more English-language publishers have felt the need to make their given localizations more ‘appropriate’ for Western audiences, with the latest example being retailer Right Stuf Anime’s announcement that they will no longer be selling adult materials following their acquistion by Sony via Crunchyroll. 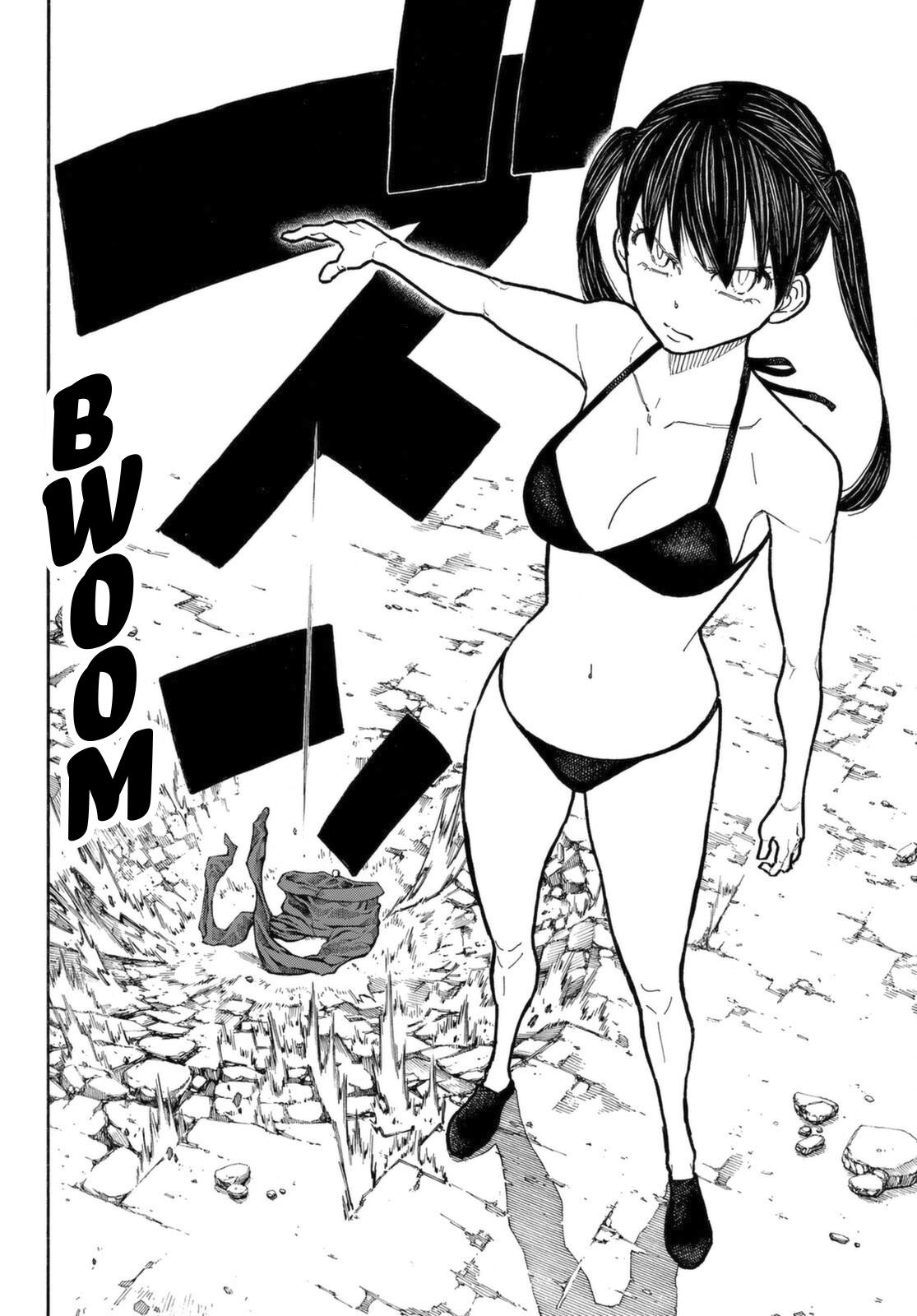 The alarming news came on August 4th when Right Stuf announced via their official Twitter account, “We are excited to announce that today Right Stuf is joining the Crunchyroll family! We will work together to get you more of what you want when you want it.”

That is, as it turns out, unless what the fans want is considered to be ‘too spicy’. 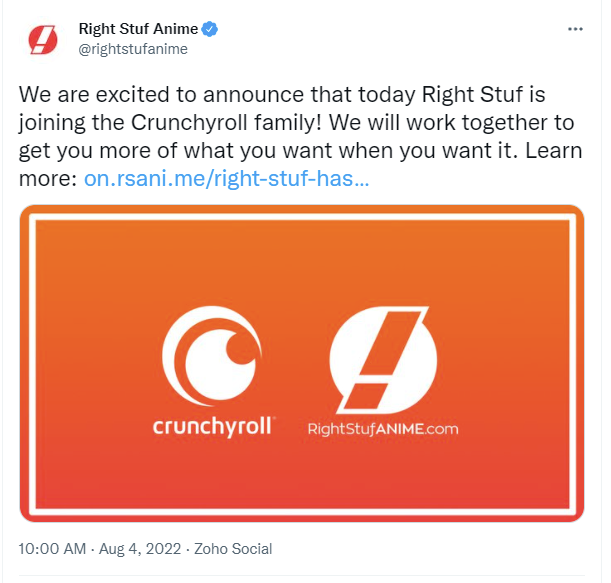 In an FAQ linked by the retailer elaborating on their terms of acquistion, Right Stuff assured customers that there “should be no changes to ordering” and that they “will continue to provide the same wide variety of products we have been offering for 35 years” – unless you’re specifically looking for Erotica products.

“As part of our new Right Stuf + Crunchyroll unification we will be phasing out the Erotica genre content and product,” they wrote in a specific Erotica/Removed Items FAQ. “New orders for these items will not be accepted, and they have been removed from RightStufAnime.com.” 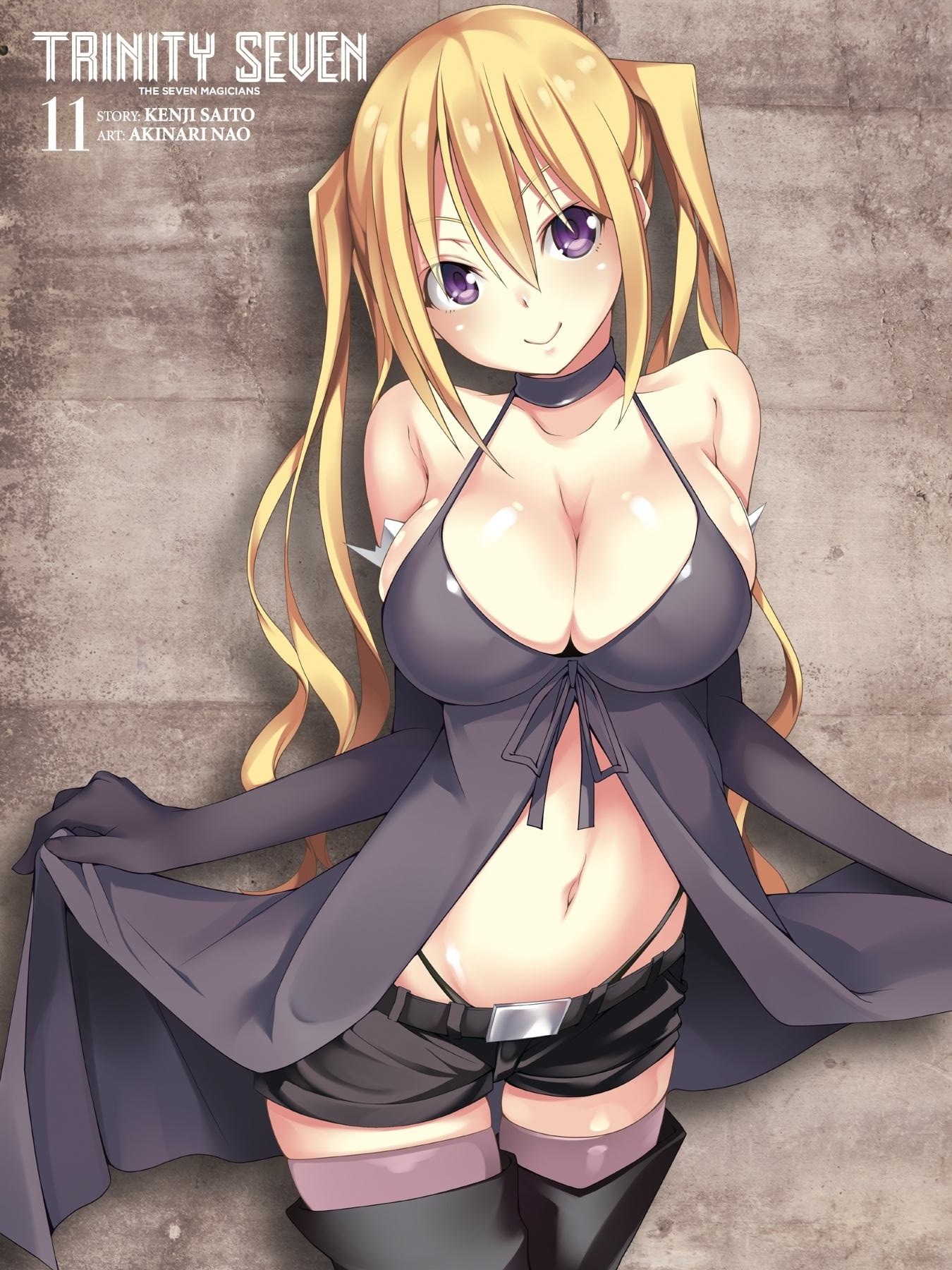 The retailer then revealed that not only will “existing orders will be honored” through a newly-created storefront, Ero Anime Store, but that said storefront will be the “place to continue to order these items going forward!”.

In a welcome letter published to Ero Anime Store’s front page, the company’s alleged President, an individual named Wendy C, explained, “As part of the new Right Stuf + Crunchyroll acquisition, they will no longer be carrying mature anime content. We’re going to be taking on this line of business, and I’m really excited to have you here and have the opportunity to be of service.”

“We’re going to make every effort to make the shopping experience in our shop as similar as possible to what you’ve been accustomed to,” she added. 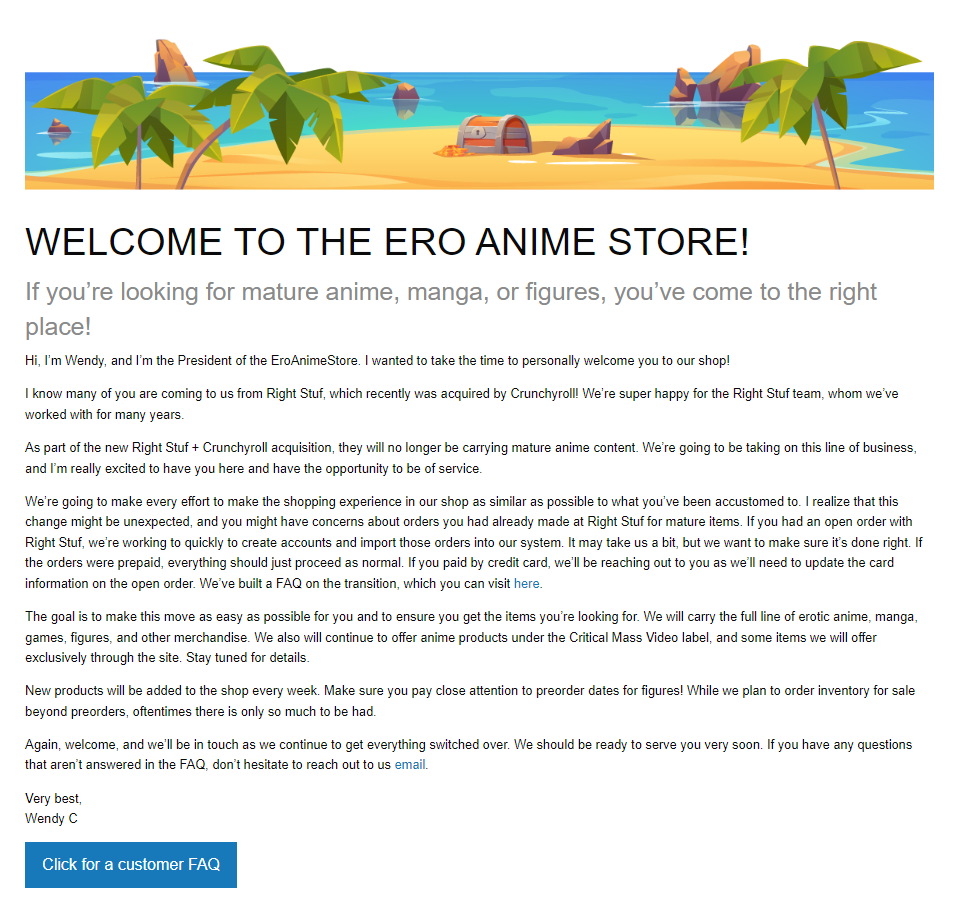 Noting that some customers “might have concerns about orders you had already made at Right Stuf for mature items”, Wendy assured, “If you had an open order with Right Stuf, we’re working to quickly to create accounts and import those orders into our system. It may take us a bit, but we want to make sure it’s done right.” 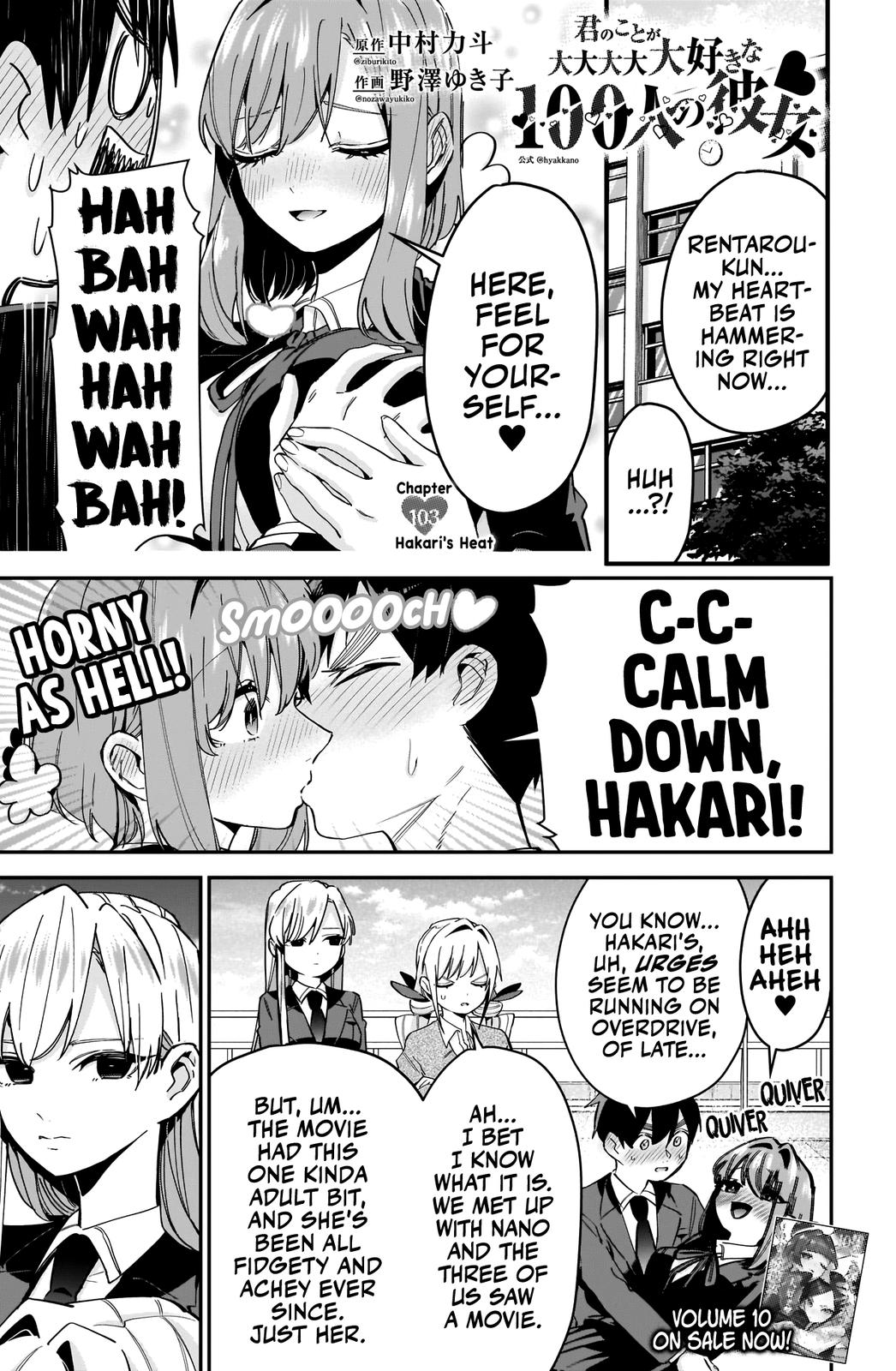 RELATED: Interview: Fan And Professional Translators Speak Out On Western Localization Issues And The Current State Of The English Manga Industry

Right Stuf’s new anti-ero policy drew a wave of backlash from across the industry, with both fans and creators outraged at the censorious decision.

“In gaming, SONY/ Xbox/ Nintendo are duking it out,” opined On Takahashi, a representative for doujinishi publisher Irotori Comics. “But SONY finds themselves an unopposed market in anime.” 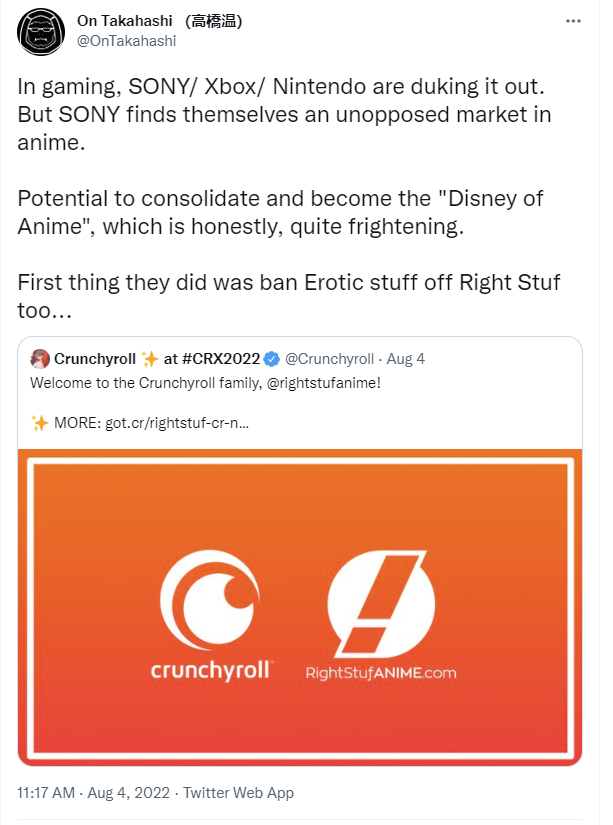 “They removed Interspecies Reviewers Blu Ray from their store,” observed oprainfall co-owner @NepsKnight. “Something they put out exclusively from them. I’m done as a customer here personally.” 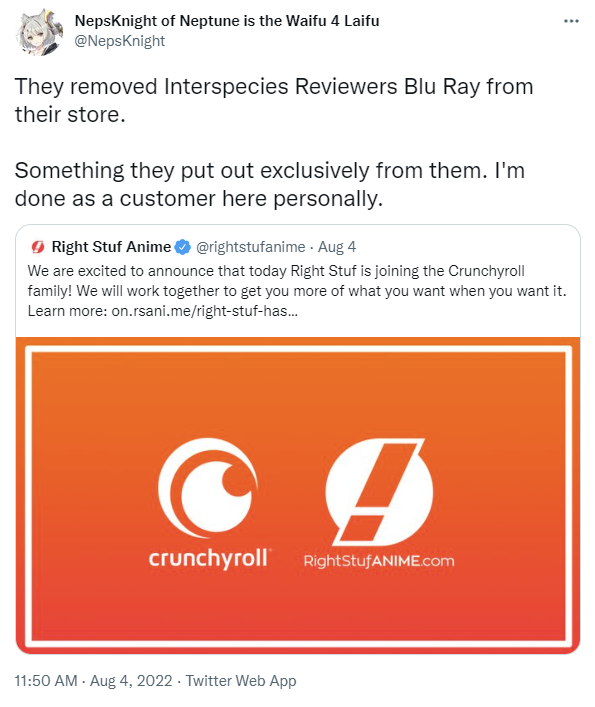 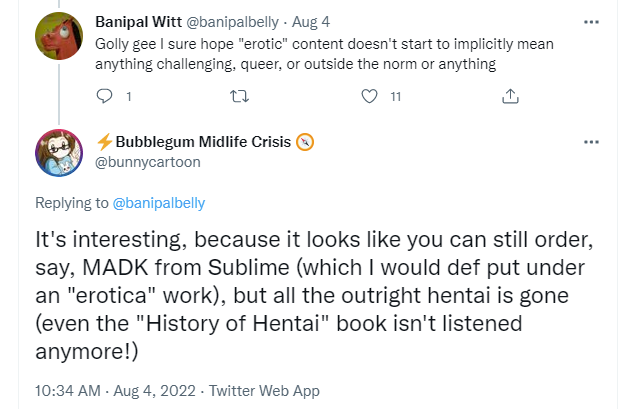 @bestgirlyazy asserted, “Oh this is why they got rid of free Canadian shipping over 250 on rightstuf a few weeks ago. Suddenly it was 100$ to get a few manga shipped here.” 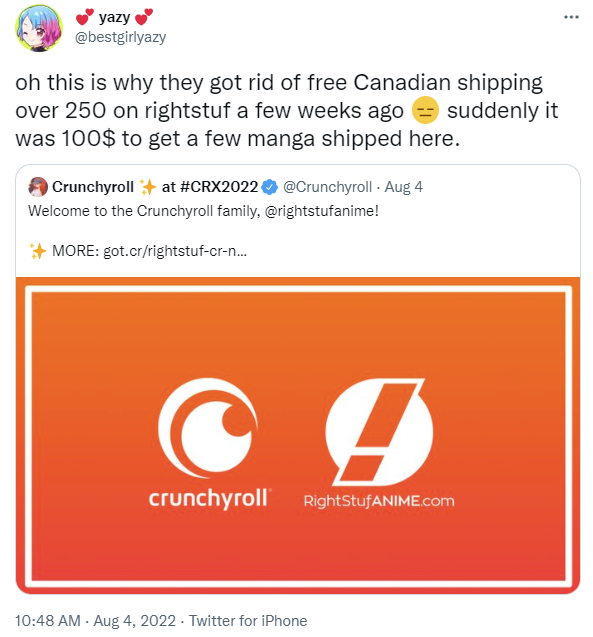 Another person who contributed to the many hindsight theories of early signs of acquisition  was journalist George Hovath.

“Well… I guess we all now know why Sentai had that massive firesale that screamed ‘Empty our stuff out of Right Stuf’s warehouse ASAP!’ last month,” said independent anime journalist George Horvath . “They obviously knew this was coming, and wanted to get as far away from Crunchyroll as possible.” 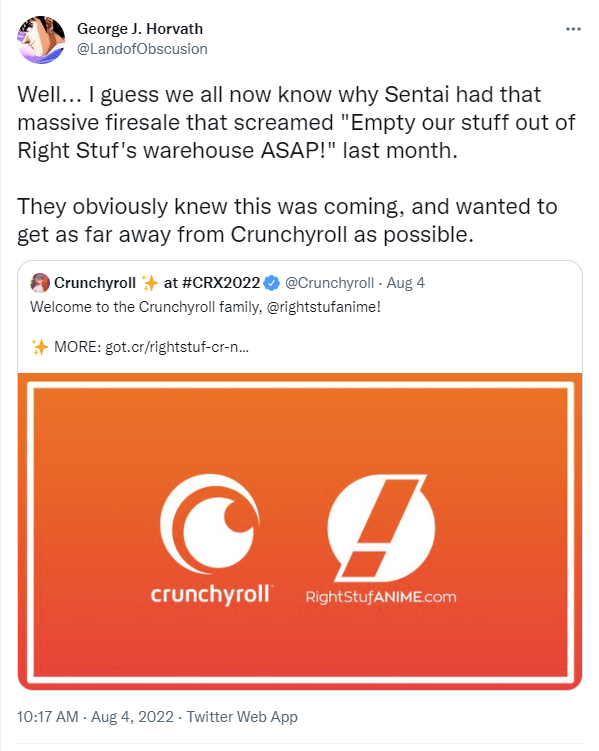 “I’m not going to call this ‘The Death of Right Stuf’, or anything silly like that,” He added. “But the idea that the American anime industry is just continually contracting into more & more of a nigh-monopoly, or at least part of a larger entity, is really disheartening.”

Ultimately, Horvath pondered, “I mean, who’s truly left as this point as ‘independent’, at this point? There’s Discotek Media, Media Blasters, seemingly Nozomi (which apparently is currently NOT included in the Right Stuf buyout)… and that’s it? Everyone else is owned by someone else.”

“This is a massive blow Right Stuf was a big account for FAKKU.” He added. “And one of the only retailers that really embraced 18+ anime/manga. Not good.” 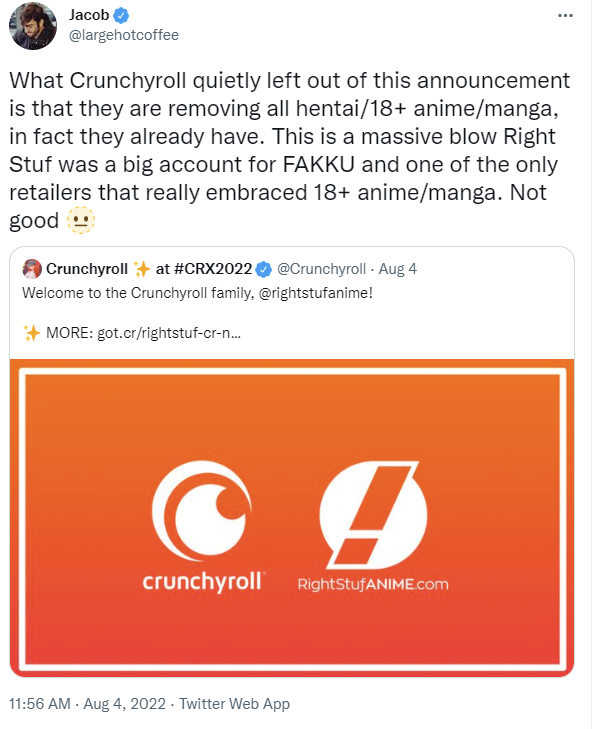 Amidst the various discussions surrounding the acquistion, some fans have wondered how the deal will affect Right Stuf’s Nozumi Entertainment sub-division, which has been working on a number of Kickstarter-backed projects including a dub of the classic 1985 ecchi sci-fi comedy series Dirty Pair. 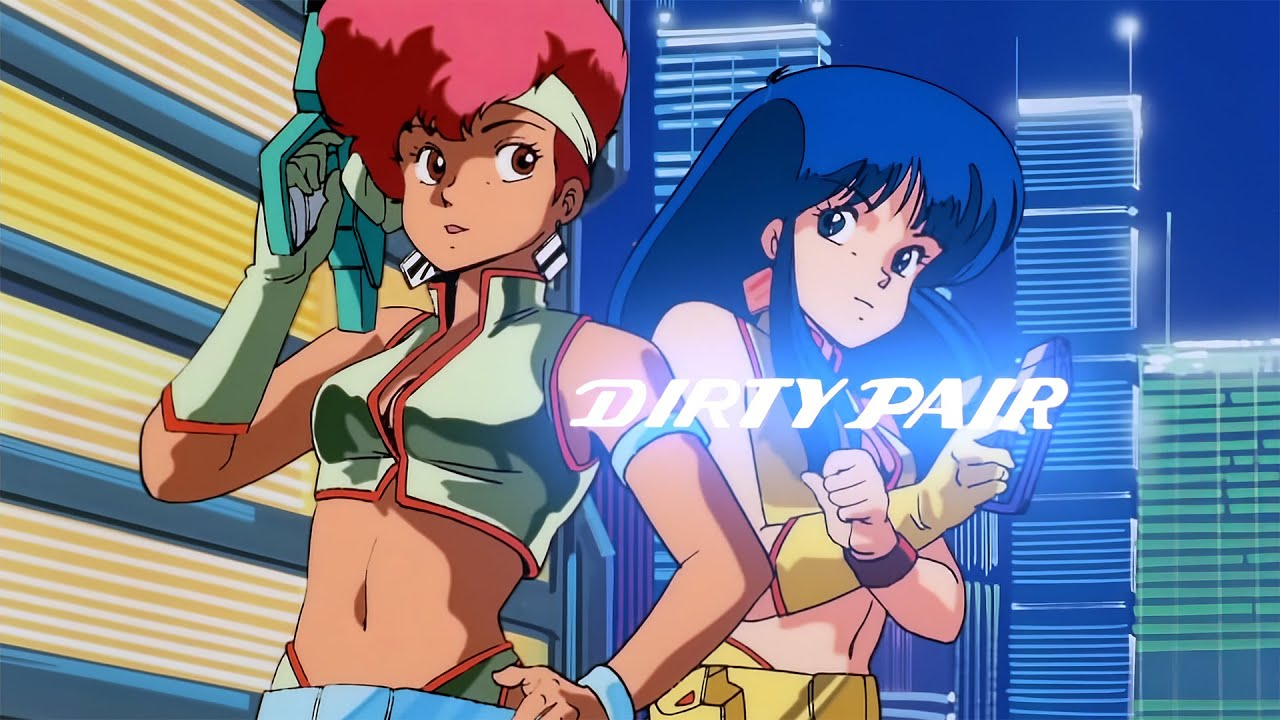 Thankfully, Right Stuf CEO Shawne Kleckner posted a recent update to the Dirty Pair dub’s Kickstarter page wherein he declared, “I want to reassure you that everything for this project is still being handled by the Nozomi team. And nothing about the dub or the Blu-ray release will be affected by this acquisition.”

“Also, fulfillment of all Kickstarter rewards will continue to be handled by Right Stuf Anime, the same as all our previous Kickstarter projects.” Kleckner reassured fans. “We will have more updates on the progress of the dub coming soon, so please look forward to it!” 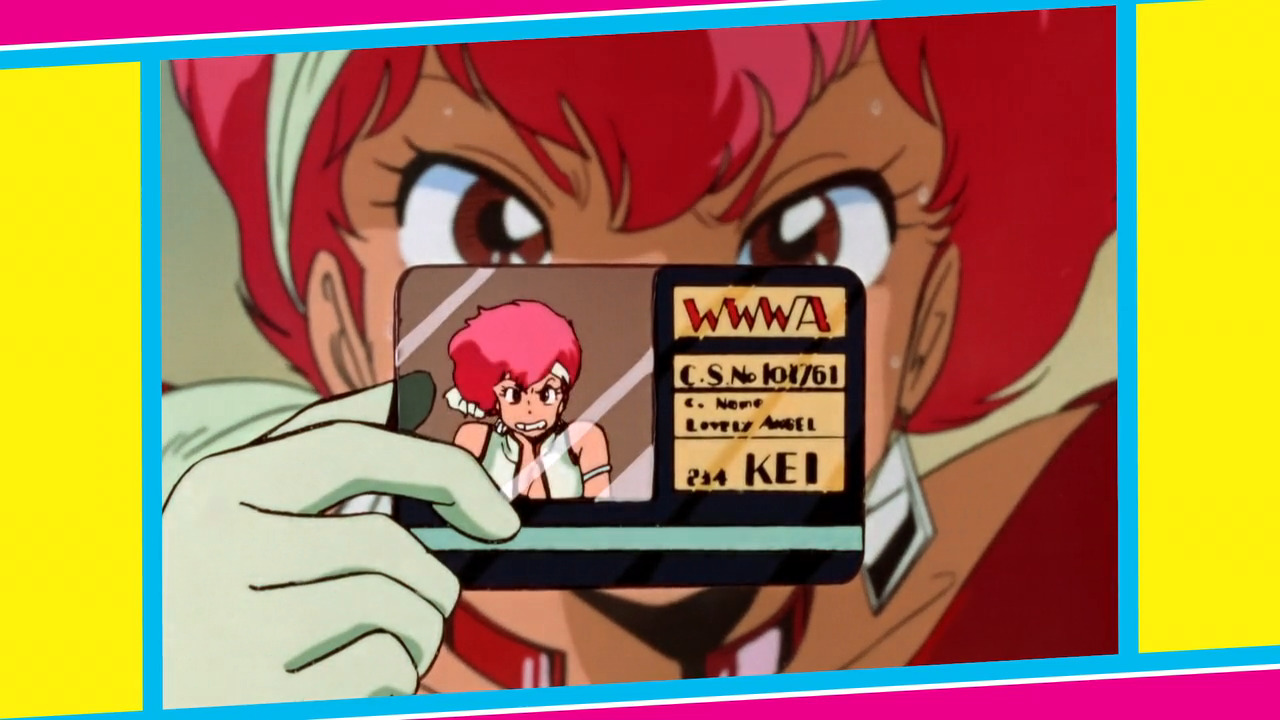