Developer 2K have announced Marvel’s Midnight Suns has been delayed to a yet-to-be-determined date, with no new release date in sight for last generation consoles. 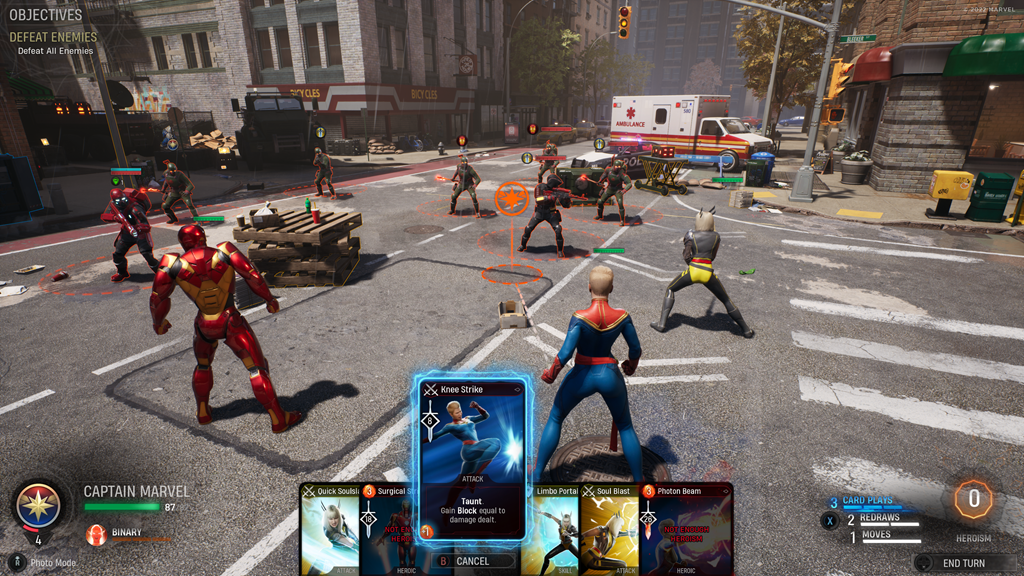 “We have an important update to share regarding our launch date For Marvel’s Midnight Suns. After discussion with the team, we’ve made the decision to move back the launch timing of Marvel’s Midnight Suns to ensure we are delivering the best possible experience for our fans,” the statement reassures. 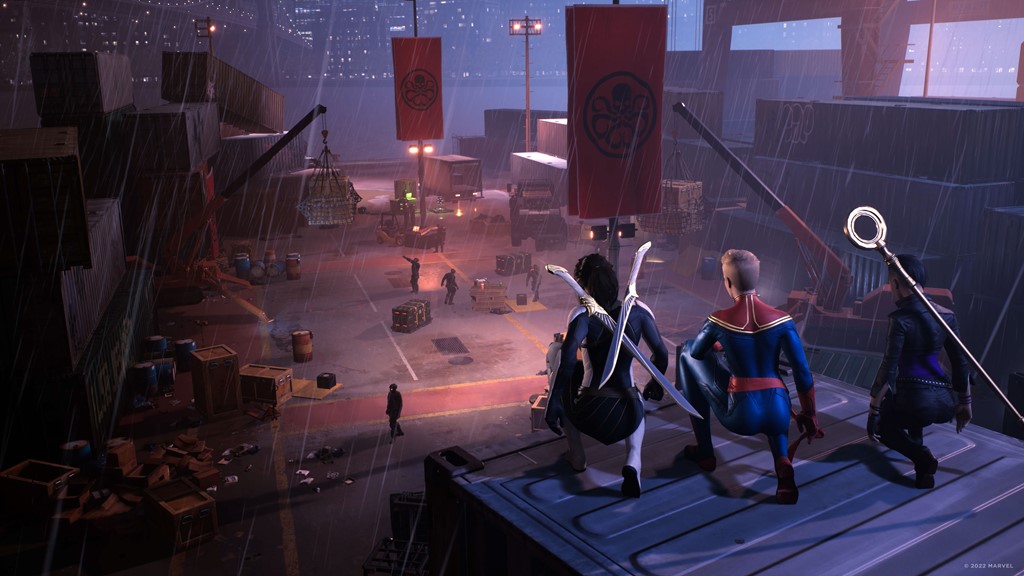 “We will launch later this fiscal year on Windows PC, Xbox Series X|S, and PlayStation 5, with the Xbox One, PlayStation 4, and Nintendo Switch versions following at a later date.”

“We know fans are looking forward to playing Marvel’s Midnight Suns and we will use this extra time to make sure we are delivering the best possible experience for everyone,” the statement justifies. “Marvel’s Midnight Suns is easily the biggest game we’ve ever made and we’re incredibly appreciative of all the support players have shared with us throughout the years.” 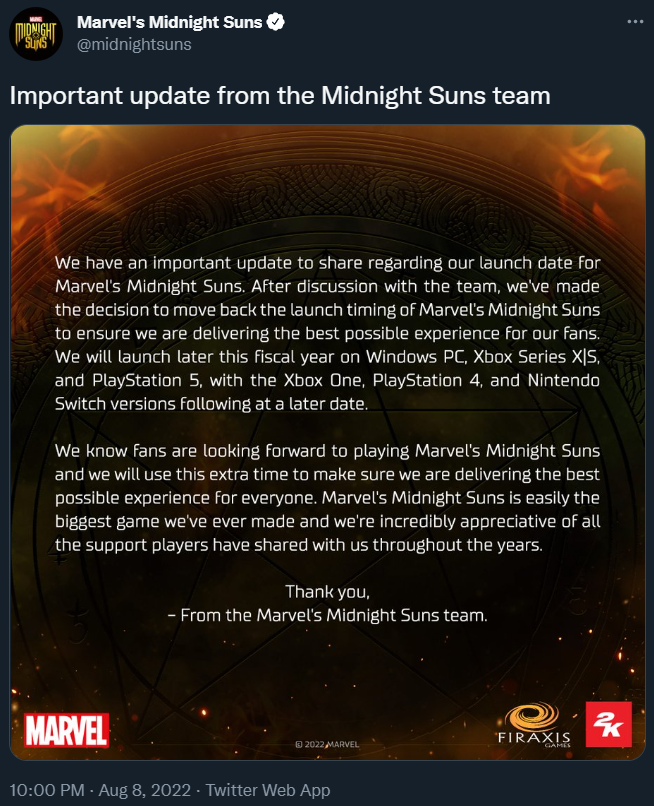 The delay was also discussed during Take-Two Interactive’s Q1 Fiscal 2023 Conference Call, which took place the same day as the announcement. “We have made the decision to move back the launch timing of Marvel’s Midnight Suns to ensure the teams at Firaxis Games and 2K deliver the best possible experience for our fans.”

“The title will launch later this fiscal year on Windows PC, Xbox Series X|S, and PlayStation 5. The Xbox One, PlayStation 4, and Nintendo Switch versions will follow at a later date,” Take-Two Interactive stated. The new release date could see the upcoming Marvel title releasing before March 31st, 2023, which is when Take-Two’s fiscal year officially ends. 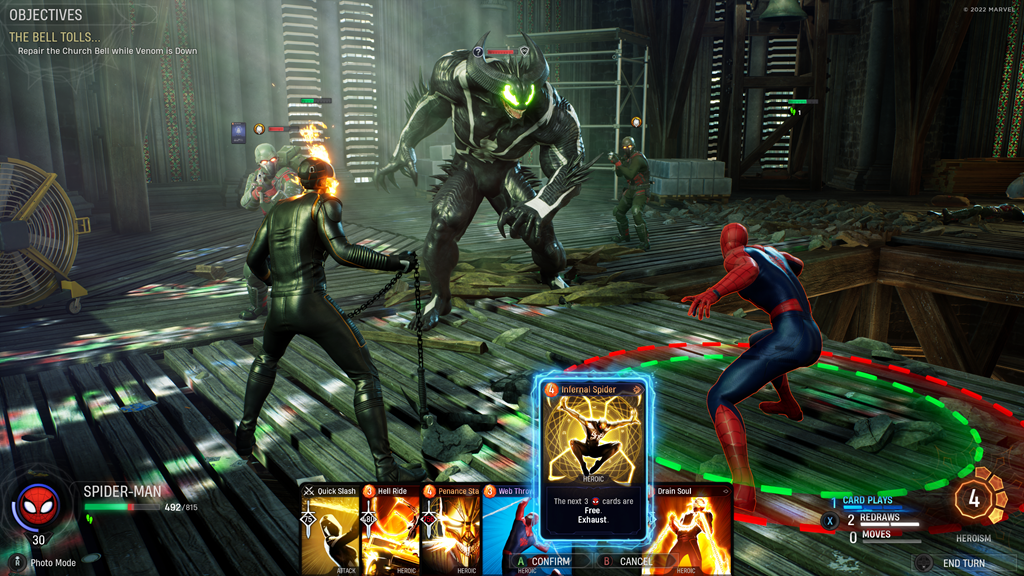 Announced in 2021, the Firaxis Games’ tactical RPG will have players face off against Lilith; descendent of the Elder Gods. As HYDRA awaken the Mother of Demons, amplifying the powers of magic worldwide. Dr. Strange calls upon supernatural superheroes to revive The Hunter, Lilith’s own rejected daughter, to bolster their ranks, and fend off the brainwashed heroes and villains gifted demonic powers.

Players can pick from 13 different heroes- The Hunter having over 40 different abilities to customize them- in card-based battles. Players can take advantage of the open battle arenas to knock foes into other hazards and characters to set-up combos. Between missions, The Hunter can interact with other heroes to help tailor their abilities, learn more about them, and become friends with them. 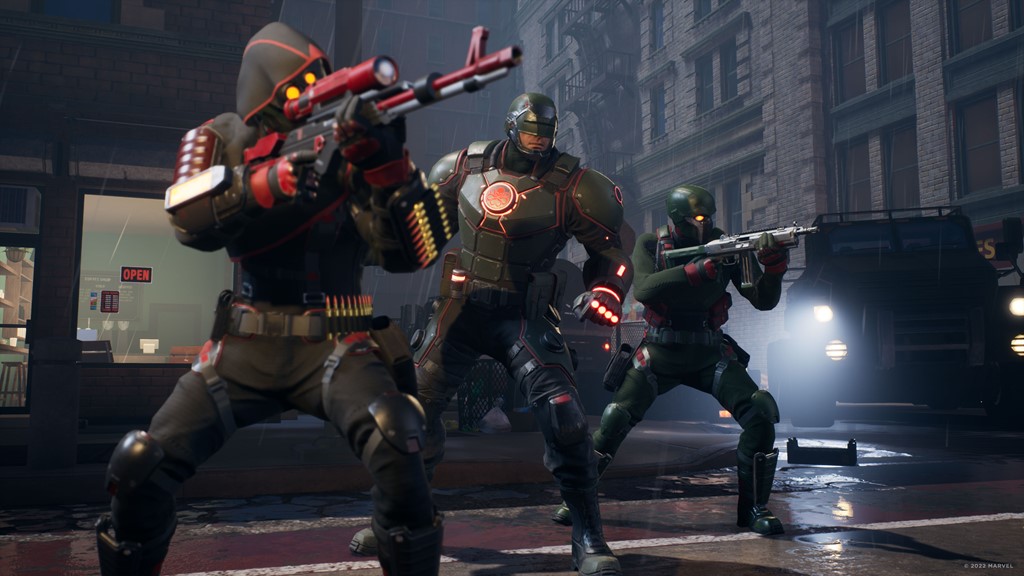 Originally aiming for a March 2022 release, the game’s initial gameplay trailer was met with questions over the actual combat and gameplay itself. In late November 2021, the game was then delayed to the second half of 2022, and essentially re-announced in June during Summer Game Fest 2022, with an October 7th release date.

Since the pre-rendered Darkness Falls trailer in June, the game’s official YouTube channel has been showing gameplay showcases of their various characters usually over 5 minutes in length, bite-sized sub 50 second showcases, and “Hero History” videos to bring everyone up to speed on the characters’ histories. 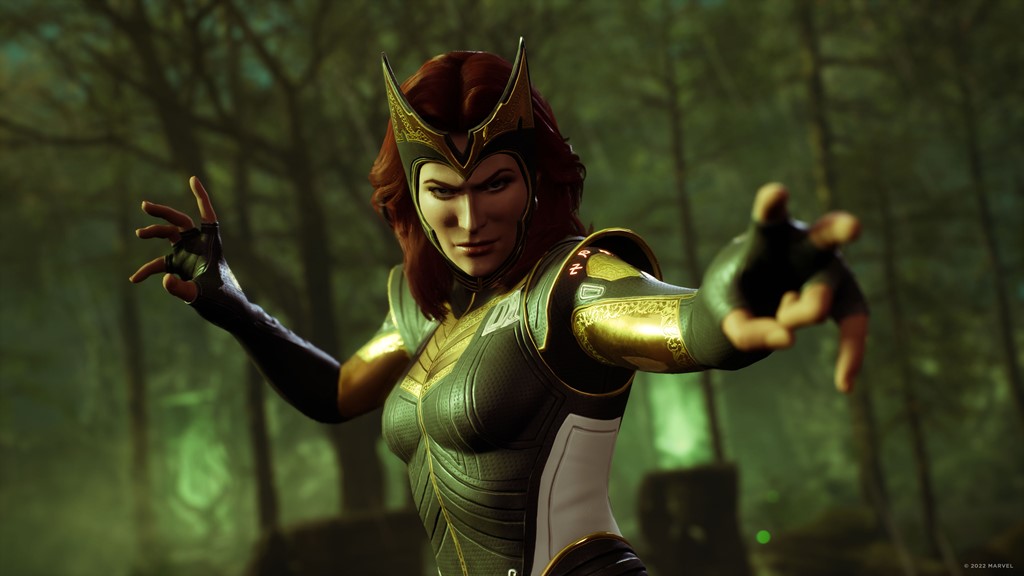 What are your expectations for for Marvel’s Midnight Suns? Let us know on social media and in the comments below.