In the latest move by Hollywood – and corporate America at large, for that matter – to silence dissent against their narrative-acceptable products under the loose guise of fighting internet trolls, Amazon has unveiled a new initiative to delay user reviews for any given piece of content added to their Prime Video service.

Its existence confirmed to Variety by an Amazon representative on September 2nd after users of all opinions towards the series noticed that their criticisms were not being automatically listed under The Lord of the Rings: The Rings of Power, the company’s new system now requires 72 hours to pass after a film of series premieres before users can leave it feedback.

According to the trade news outlet, if a review is left within this three-day debut window, “each critique is then evaluated to determine whether it’s genuine or a forgery created by a bot, troll or other breed of digital goblin.”

Further, the representative revealed that thought it was discovered just recently thanks to the premiere of the multi-million bastardization of J.R.R. Tolkien’s seminal fantasy works, the system has actually been in place since August 12th, with its first test subject being the streaming platform’s series reboot of A League of Their Own. 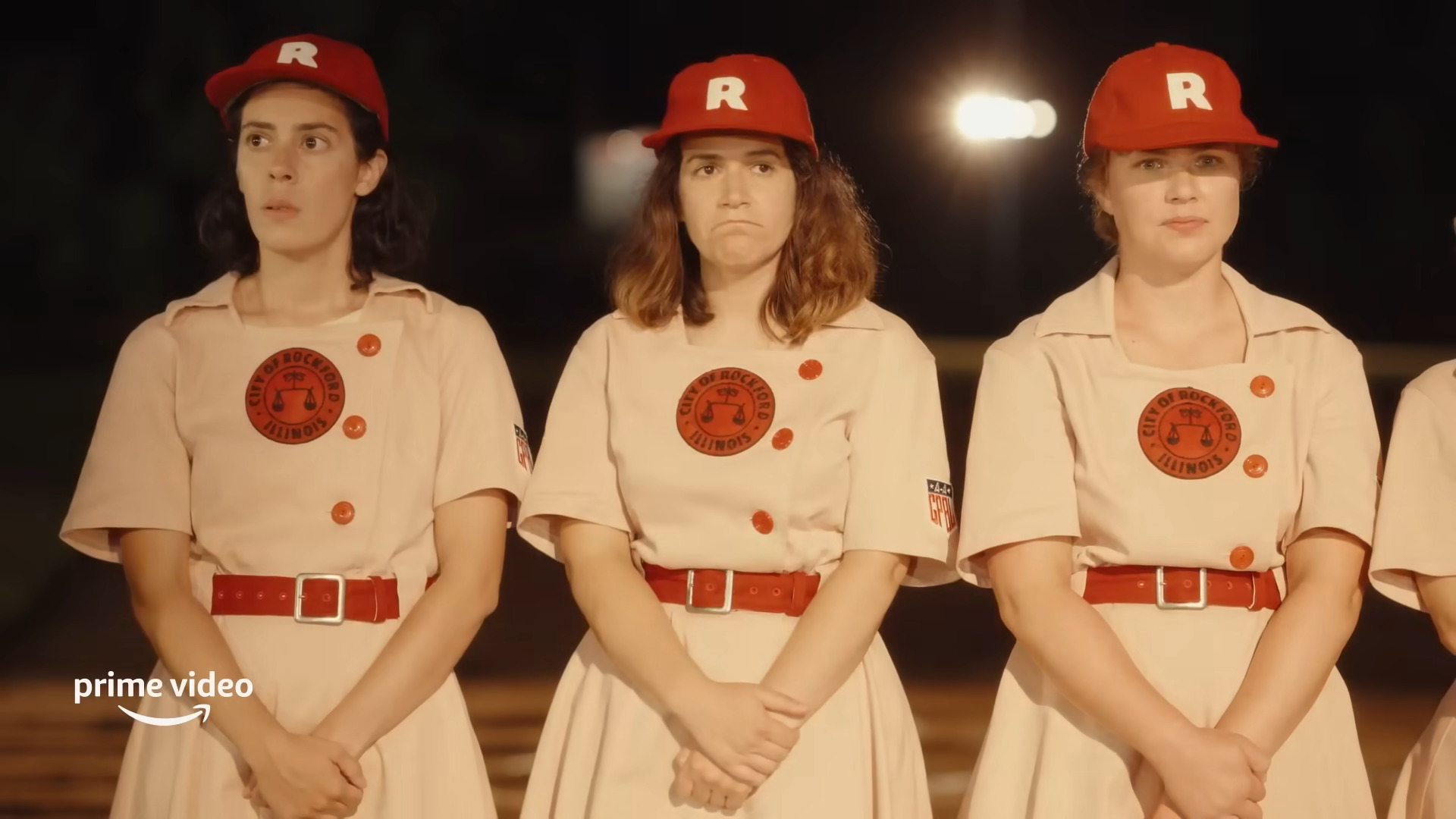 Source: A League of Their Own – Official Trailer, Prime Video YouTube

Notably, in support of Amazon’s performative fears Variety pointed to the stark contrast between the series’ current 84% critical and 34% audience rating on Rotten Tomatoes as evidence that The Rings of Power would see, and in fact had already been the victim of, review bombing.

However, this disingenuous framing of the audience score ignores the fact that while many of the series’ negative reviews were left by those who understandably (and arguably rightly) rejected The Rings of Power solely for its wanton butchering of Tolkien’s vision, a vast majority of them came from fans who – as evidenced by their direct critiques of the episodes themselves – gave its premiere a chance and still found themselves disappointed.

One such user, Cairo R, wrote in his 1-star review, “My wife and I literally fell asleep half way through the first episode. The dialogue is bland and uninspired, the pacing is boring, the characters are unlikeable, Galadriel has a grating smugness and hubris seeping from her pours… it’s hard to say much positive so far bedsides ‘the soundtrack is excellent,’ but that’s only because Howard Shore is fantastic as always.”

“We will give it another shot tonight, but so far it has failed to captivate in any kind of meaningfully positive way,” he concluded.

Joel R, who made it clear that he did not “believe in [rating things as] 1s and 10s in all but the most extreme cases,” likewise asserted that “it’s a very solid 2 or 3, but considering the source material, it SHOULD have been better.”

“There’s still time to turn it around, however, I’ll be tuning out until the end of this first season at least,” they admitted. “If they successfully course correct over time, I may revisit, but as of this moment, I see no reason to dilute my favorite characters and fictional story.” 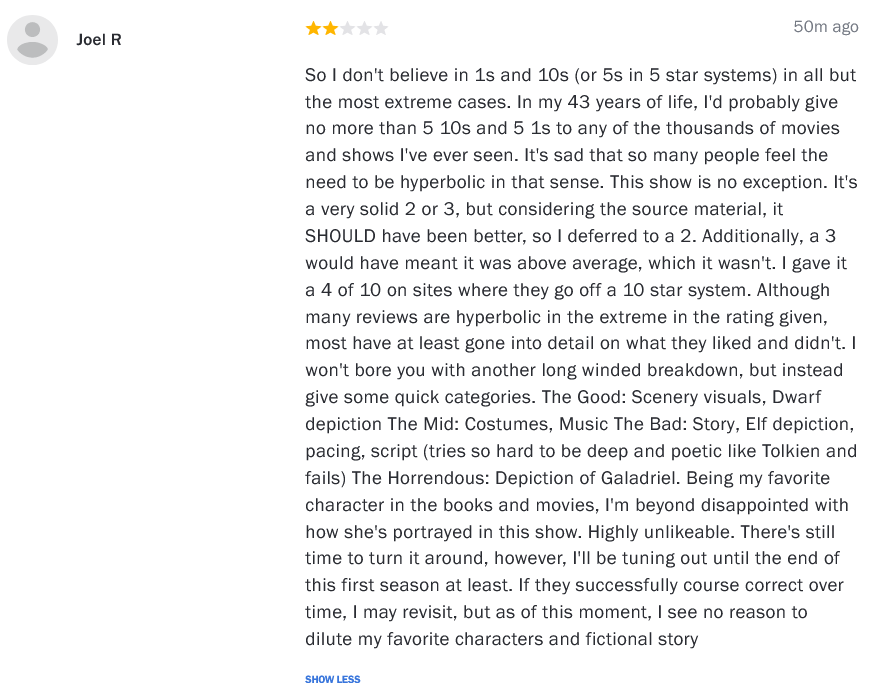 “It’s a tragedy that so much money was spent to build something so beautiful,” lamented Anthony. “And seemingly zero time spent on the script. I was simultaneously in awe of the look of it, but dumbfounded by the stupidity of it.

“I think I actually hurt myself when I involuntarily rolled my eyes at the ‘you people’ line directed at the dark skinned elf,” they continued, referring to the scene (as seen below) wherein Arondir is confronted by a thinly-veiled straw-man of a Trump supporter. “Who on earth thought that was a line that needed to be said? And the writing just never rises above that level of sophomoric idiocy.”

If you were more on the nose, you would be touching brain. pic.twitter.com/BzpI7NMqtd

RELATED REPORT: Amazon Studios Will Declare ‘The Lord Of The Rings: The Rings Of Power’ A Victory “Regardless Of Actual Viewership”

The proper unveiling of Amazon’s new review-blunting system follows a previous report from Business Insider which claimed that, as per predictions from their insider sources within Amazon, “that Amazon will find a way, regardless of actual viewership, to sound the trumpets of victory.”

“[A former exec said that] Amazon data wonks, who typically know within the first week if a project is going to trend well, will be looking to spin ‘Rings’ numbers into the sunniest possible story,” added the three person reporter team of Elaine Low, Eugene Kim, and Alison Brower. “

In a direct quote given to Business Insider, a separate insider asserted that “If it’s not the highest-performing thing Amazon has ever done, it’s a failure, but the outside world may not ever know.”

The Lord of the Rings: The Rings of Power is now available for streaming on Amazon Prime.

NEXT: ‘The Rings of Power’ Star Lenny Henry Implies Critics Of Amazon’s Race-Swapping Are Racist: “They Have No Trouble Believing In A Dragon But Can’t Accept That A Black Person Could Be A Hobbit Or An Elf”