Ubisoft have denied Assassin’s Creed Mirage will contain loot boxes or real gambling, as the latter was featured a content disclaimer.

The latest Assassin’s Creed game in the 15 year long series was announced during the recent Ubisoft Forward showcase, along with future titles in the series at a separate event. While the game had been leaked and officially announced earlier, fans finally saw the reveal trailer for Assassin’s Creed Mirage.

On the Xbox website however, Assassin’s Creed Mirage is noted as being “Adults Only 18+.” The reasons cited were “Intense Violence, Blood and Gore, Sexual Themes, Partial Nudity, Real Gambling.”

The Gamer also reports the Adults Only rating in the game’s reveal trailer — or the beginning of the Ubisoft Forward livestream, rather. Similarly, Eurogamer cites the UK Xbox webpage listed real gambling and extreme violence.

The latter is likely the reason for the Adults Only rating. Combined with a note on the game containing “In-Game Purchases,” some on social media and gaming news press assumed this meant Assassin’s Creed Mirage would include loot boxes. Yet, other games with loot boxes have not been given such a rating.

The ESRB defines real gambling as “Player can gamble, including betting or wagering real cash or currency.” Meanwhile, loot boxes are “In-Game Purchases (Includes Random Items).” So if true, it would mean the game would contain an extreme level of violence, or outright gambling.

YouTuber Vara Dark noted in her coverage that while recent entries in the series had not managed to pique her interest, Assassin’s Creed Mirage going back to the series’ gameplay roots sounded appealing.

These hopes were dashed with the “real gambling” disclaimer and the fact she suspected that, while it was in character for the developer to use “scummy” business models, even Ubisoft were likely worried over the content disclaimer. She proposed the company may even have to rework or delay the game, or that the ESRB had finally put its foot down over business models that rely on random chance.

All of the above was later undercut with it not potentially being true. The ESRB website has no listing for Assassin’s Creed Mirage at the time of writing, while rated upcoming titles — such as Mario + Rabbids: Sparks of Hope — are shown.

Ubisoft finally broke the silence, issuing a timely statement. “Following the announcement of Assassin’s Creed Mirage, some store pages displayed the game for preorders with an Adults Only ESRB rating. While the game is still pending rating, we want to reassure players that no real gambling or lootboxes are present in the game.” 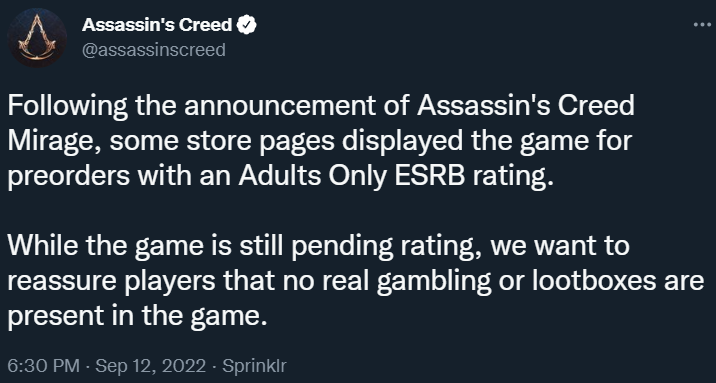 Despite claims the content warning was under review or in error, it’s a surprising set of circumstances to have manifested. An Adults Only rating typically prohibits a game from sale on most consoles and major retailers, or at least heavily discourages it in favor of the ’18’ rating. Yet, none involved gave pause to declaring the rating with no clarification on it being provisional.

The Adults Only warning at the start of the Ubisoft Forward livestream also suggests Xbox merely acted on orders from Ubisoft, yet did not disclaim it being a provisional rating.

If the fault lied with the ESRB, it could be they sent a rating that was intended for another game, or wildly misinterpreted other content in Assassin’s Creed Mirage. Even so, its hard to imagine they would mistake a “simulated gambling” mini-game for one where real money could factor into it.

No matter the case, it would suggest Ubisoft made no objection when they received the rating and continued with the Adults Only content warning at the start of the livestream. There may have been a potentially short time frame between the ESRB provisional rating and the presentation, though one would expect further planning in advance for a best first impression.