Rotten Tomatoes approved critic and YouTuber John Rocha deleted a racist tweet that pushed the idea that white people should not review the latest Star Wars series, Andor, without a Latino guest. 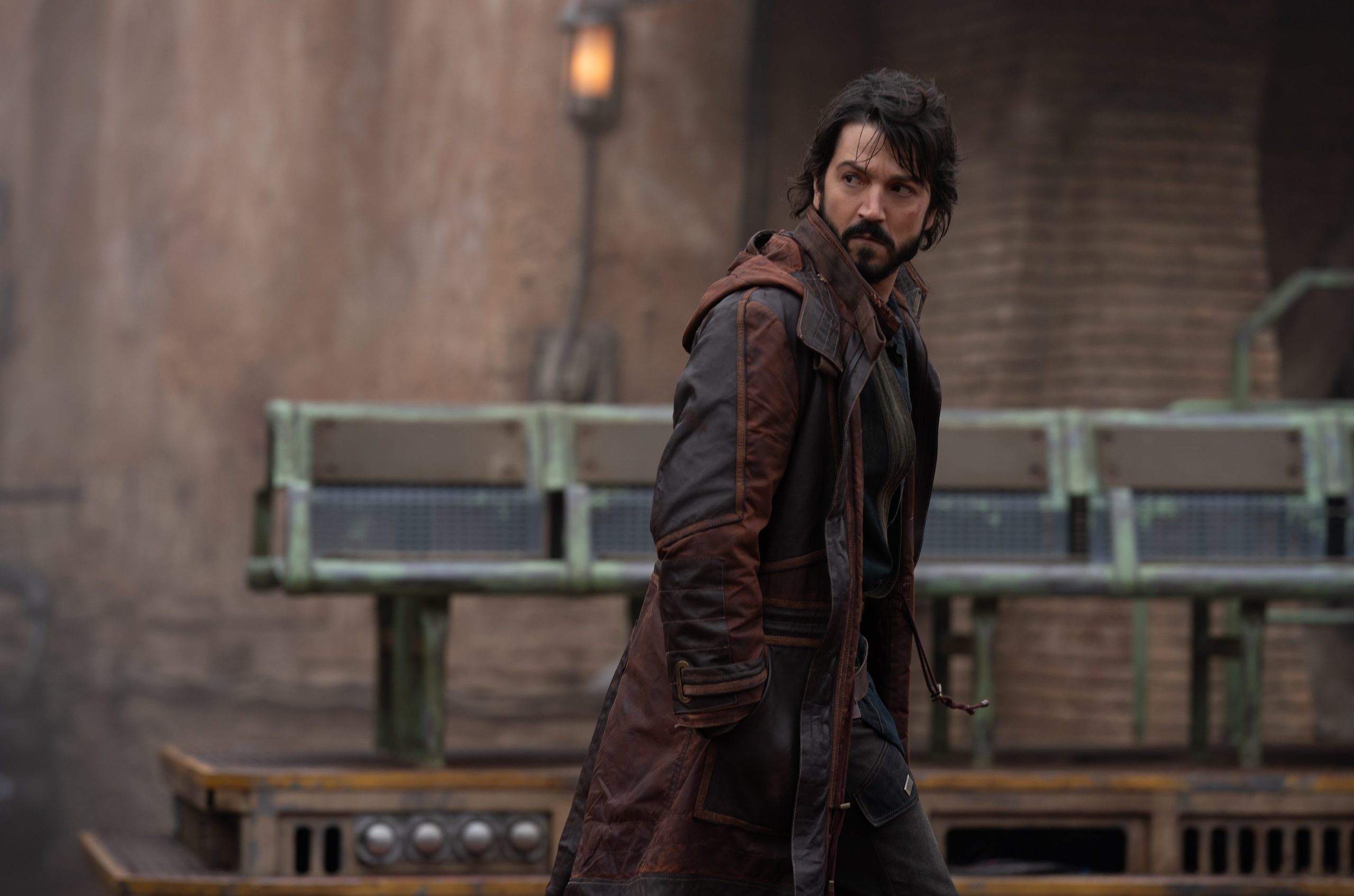 On September 20th, Rocha took to his Twitter account where he wrote, “Some Star Wars shows might get pissed at me, but if I see any Andor review that features all white people, I’m going to call it out.” 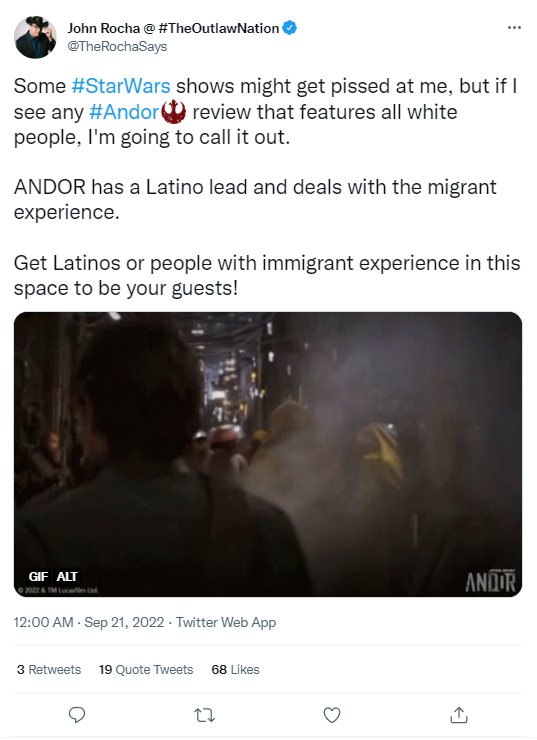 He continued, “But it’s funny seeing so many people outing themselves in these replies as angry racists because I DARED to say I would call it out. Oh boy.” 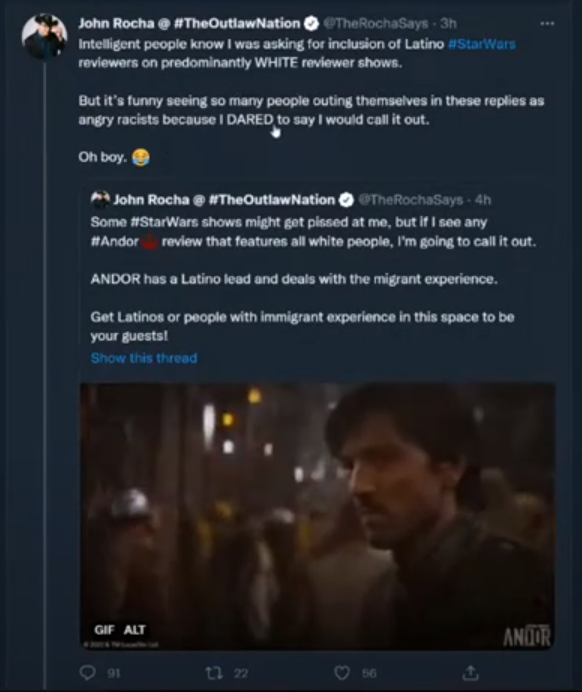 When he was called out for trying to exclude white people from reviewing Andor, Rocha replied, “No. I wasn’t. I said I’d call out any all white shows who were not INCLUDING Latino or people with migrant experience reviewers or guests.”

“I didn’t say they couldn’t do their shows or that people shouldn’t watch their shows. THAT’S ‘exclusion’. But you knew that already.” 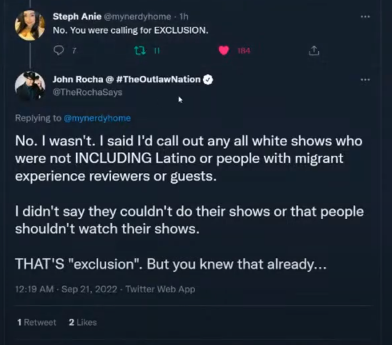 YouTuber Ryan Kinel rebuked Rocha writing, “The funny part is, even if I did to talk to someone who qualifies for this (shout out MyNerdyHome) and they don’t like the series or they don’t like the modern day politics, her opinion would would be dismissed by people like you.” 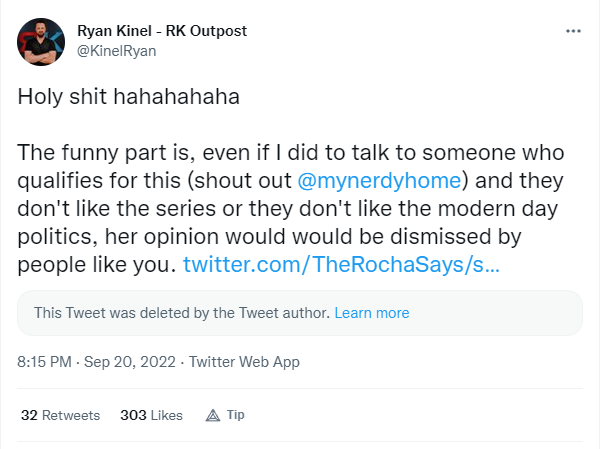 He elaborated on this point on the Geeks + Gamers Tuesday Night Main Event livestream saying, “It’s almost like that’s completely 100% true because stupid f***ing c***suckers like this that this is the only way they know how to operate.”

YouTuber, novelist, comic book creator, and Bounding Into Comics contributor Jon Del Arroz also commented on Rocha’s tweets saying, “It all comes down to race. It all comes down to skin color with these people. That’s it 100% of the time. They’re obsessed with it to the point where that’s all they ever notice.”

“And then they want to call you the racist on the flip side,” he continues. “It’s really insulting to everybody who just wants to watch a Star Wars show and not get harassed with this nonsense non-stop.”

Del Arroz further notes, “And that’s exactly why nobody’s really watching these Star Wars shows anymore. You can’t just have an experience where you’re watching a TV show like you could back in the day. Now you’re going to get bombarded with this crap. You’re going to get shamed just for your skin color. It’s just obnoxious on every level.”

He then turned his ire toward Rotten Tomatoes, “And this is what Rotten Tomatoes is all about at this point. If you don’t think Rotten Tomatoes has an agenda on this level if they’re not in cahoots with these Hollywood elites, I don’t know where you’ve been the last few years. ”

“But it just makes me laugh every single time I see this. That’s all you can do is laugh at it at this point,” he concludes.

What do you make of Rocha’s racist comments?