For a film whose Spanish-French writer and director Alberto Vazquez (Birdboy: The Forgotten Children) says was mainly inspired by Bambi, Apocalypse Now, and the Bible, it should come as no surprise that underneath the bubbly exterior of Unicorn Wars is an animated anti-war film centered on the a long-unresolved conflict between unicorns and teddy bears. 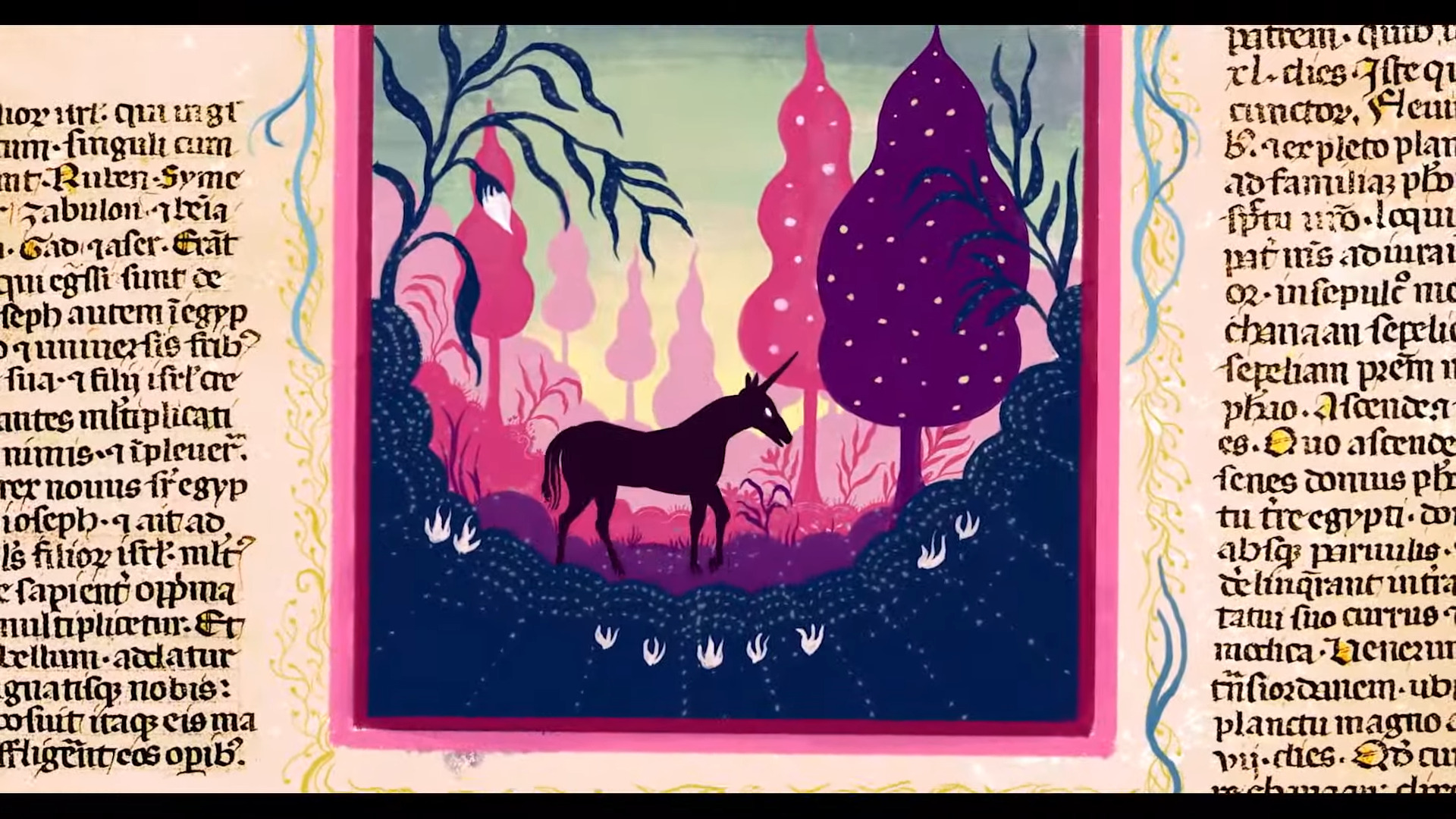 Unicorn Wars follows twin teddy bear brothers, Bluey and Tubby, as they train for all-out combat with their one-horned-and-four-hooved adversaries.

Tubby is a few minutes older than Bluey and this age difference sets the stage for their entire relationship.

Tubby has a softer personality and generally prefers love and compassion over any sort of violence, while his younger brother can’t stand to come in second at anything and is massively jealous when he’s not getting attention.

Bluey thrives to be the best and most loved in every situation regardless of what unthinkable thing he has to do in order to reach the top. 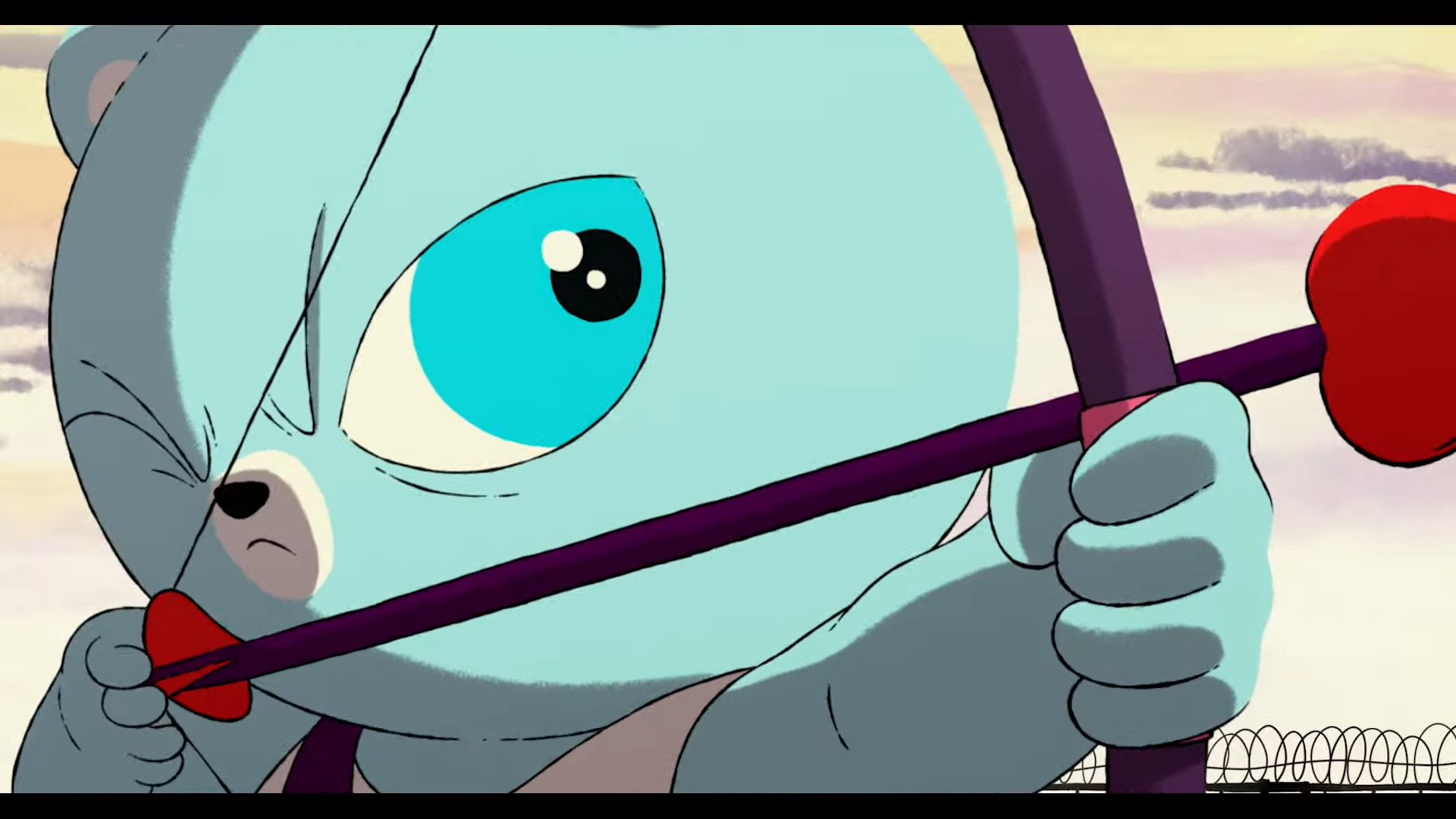 Set against a fairy tale aesthetic with painted backgrounds heavy with shades of green and purple and the ‘villainous’ unicorns showcased in all-black with purple highlights and white eyes, the blood feud between the two species is presented as entirely one-sided.

The teddy bears are hellbent on the total annihilation of the unicorns, while the unicorns never really acknowledge the teddy bears’ existence apart from the brief moments where they have to defend themselves from attack. 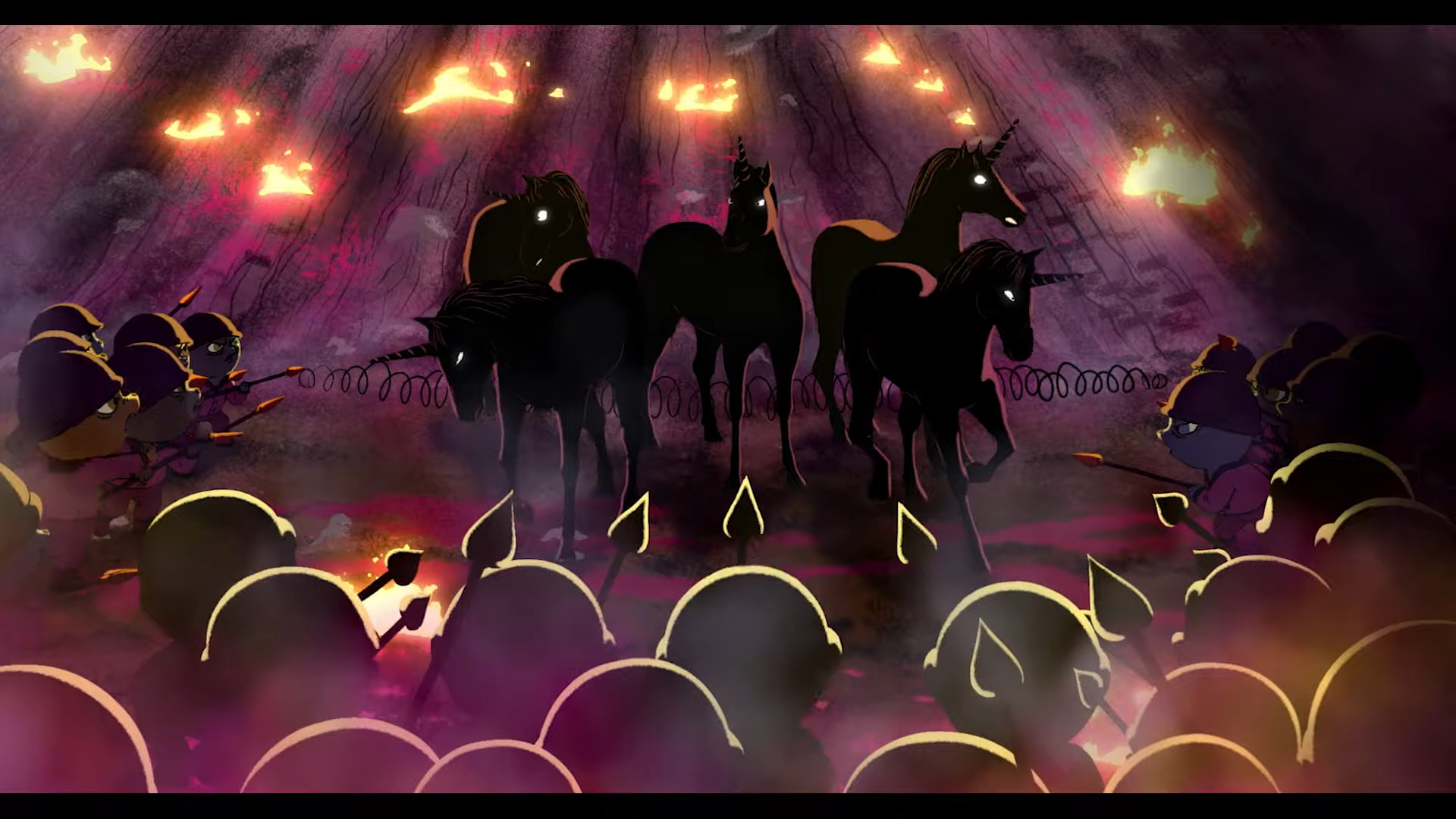 The reason for this emotional disparity is an old teddy bear folklore that claims whomever drinks the blood of the last surviving unicorn will become the king of all teddy bears.

Unsurprisingly, Bluey is consumed by this myth. Meanwhile, the other bears at camp are mostly just trying to survive and showcase their cutesy talents. 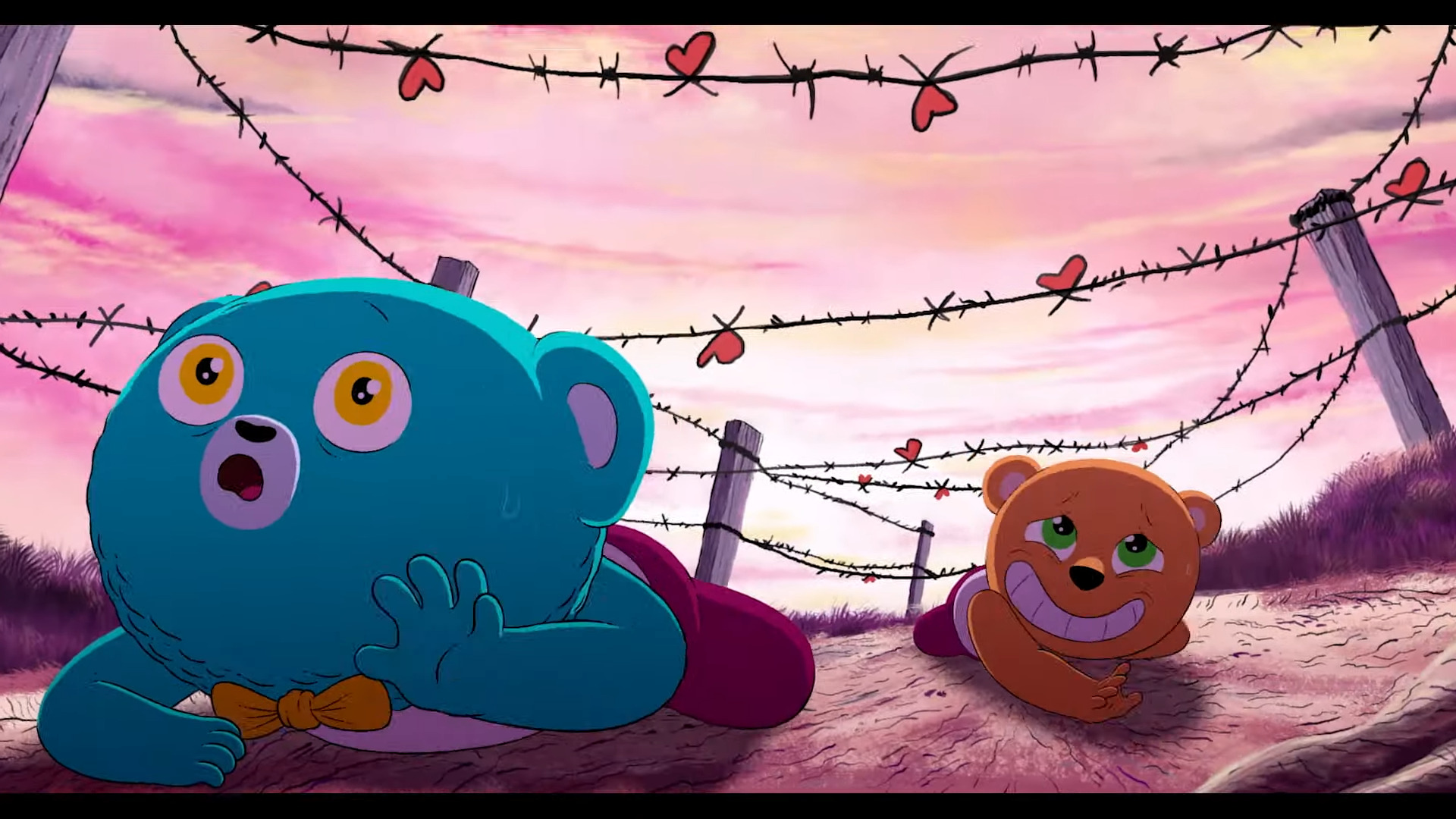 Sadly, a messy and non-committal narrative derails Unicorn Wars from living up to its full potential.

The film constantly jumps around, one moment showcasing unicorn lore, the next showing off the teddy bear fairy tale, Tubby and Bluey’s childhood, or the other war trainees killing one another. 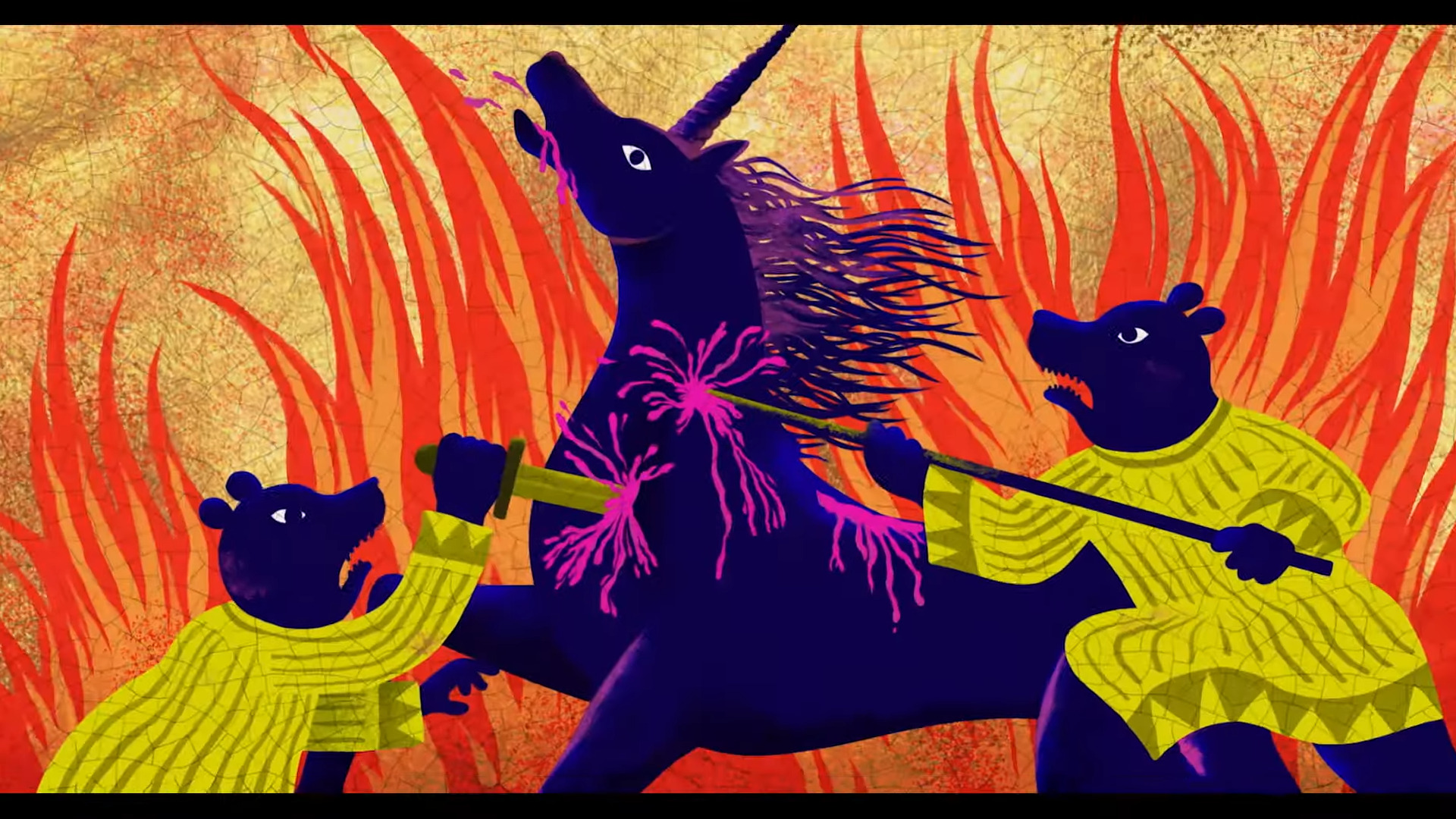 And even though it features a ton of homages and influences, including religious representation and such over-the-top animated mutilation that viewers might walk away from the movie thinking it’s just retreading ground first crossed by Happy Tree Friends, all of it doesn’t add up to much of anything.

After 80-blood gurgling minutes, you really just walk away feeling like garbage. 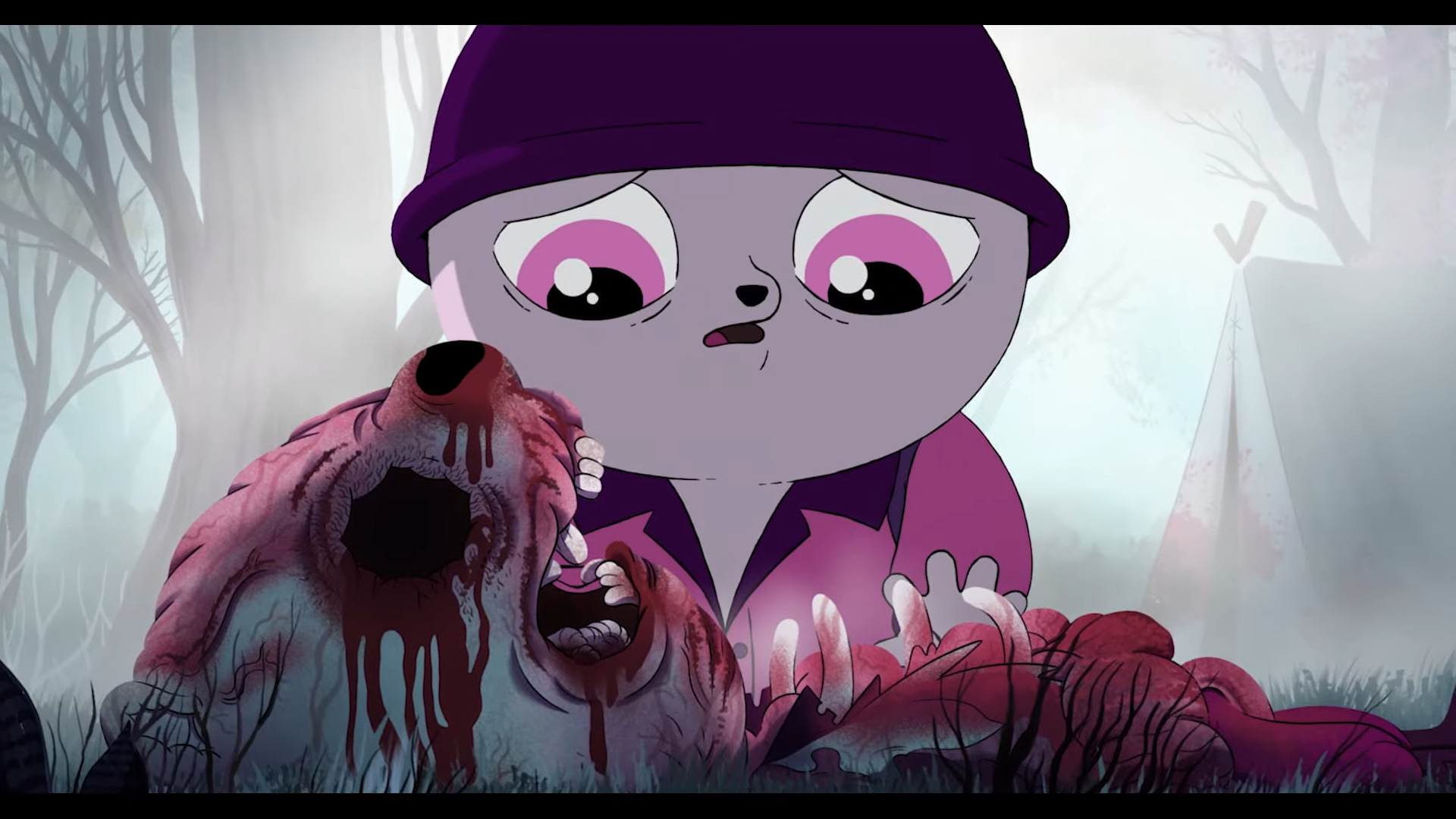 That said, it’s not like Unicorn Wars has nothing redeemable to offer as an animated experience.

The film is gorgeous, gushing with gorgeous color and remarkable character designs (Bluey’s ‘final form’, so to speak, has a look sporting Meta Knight-levels of badassery). 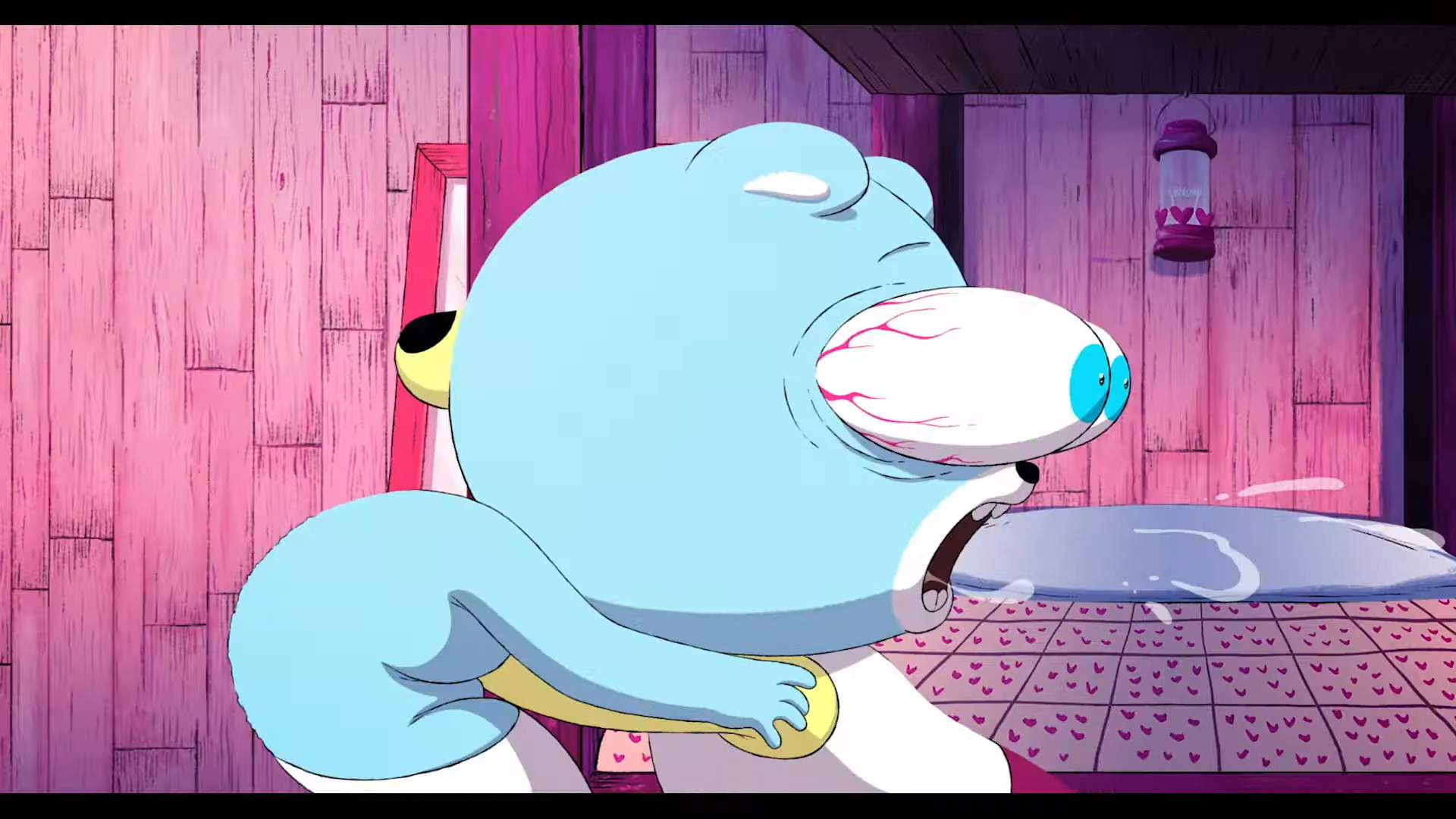 Bluey is one of the most vile, merciless, and maniacally homicidal characters ever written, and it’s impressive how analytical and willing to go terrifying extremes he is in pursuit of whatever goal he’s currently focused on.

For example, when another bear’s archery skills get him elected the leader of the teddy bear war recruits, Bluey becomes consumed with jealousy.

What that bear later gets an arm injury and needs to rest, Bluey claims that his compatriot can no longer go on and kills him for slowing them down. 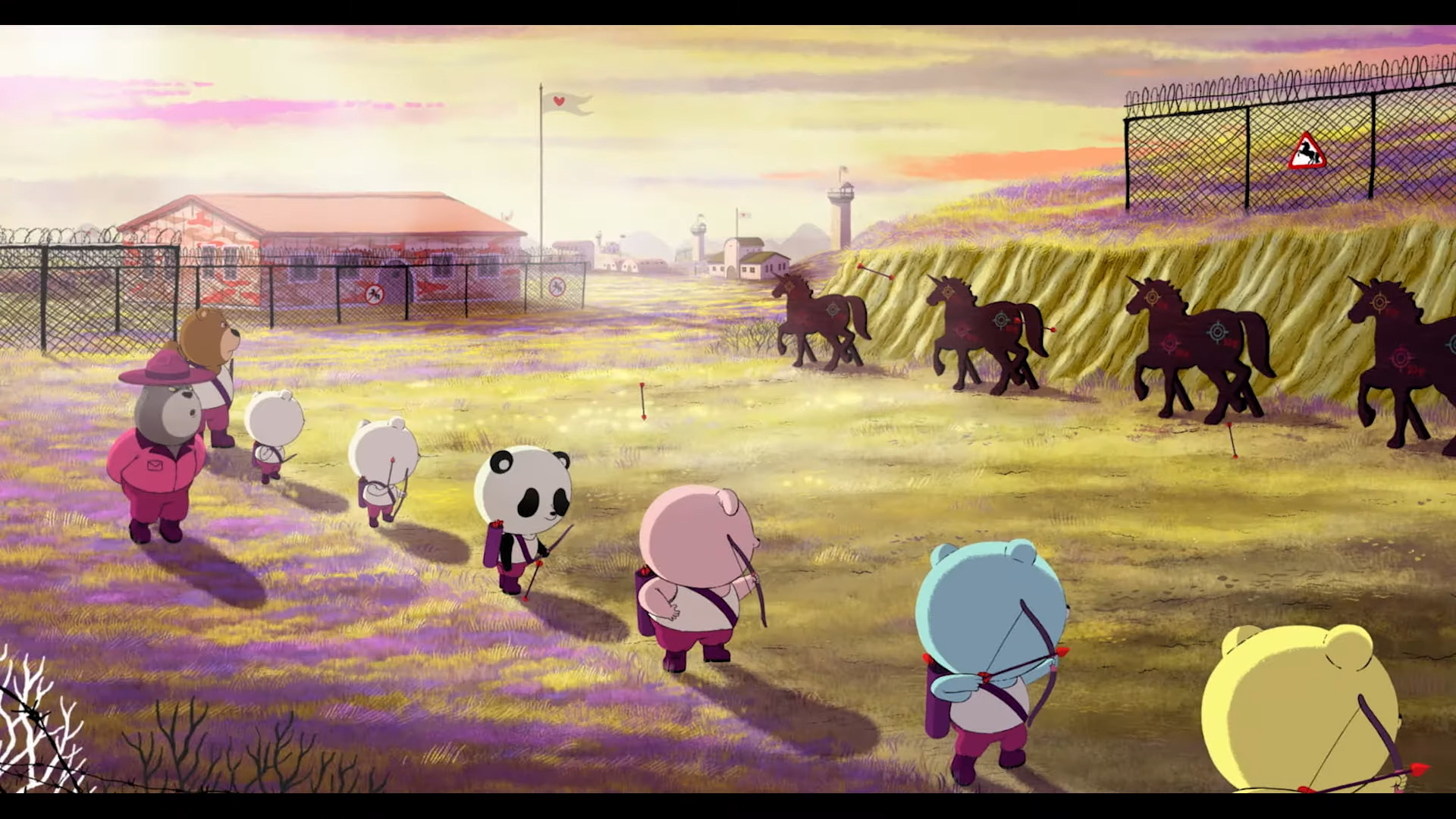 It isn’t a swift death either. It’s a slow and torturous one which sees Bluey get creative with a knife and even consume his rival’s severed limbs.

(I guess this is probably a good as time to as any to mention that teddy bear cannibalism runs rampant across the fields of the Unicorn Wars.) 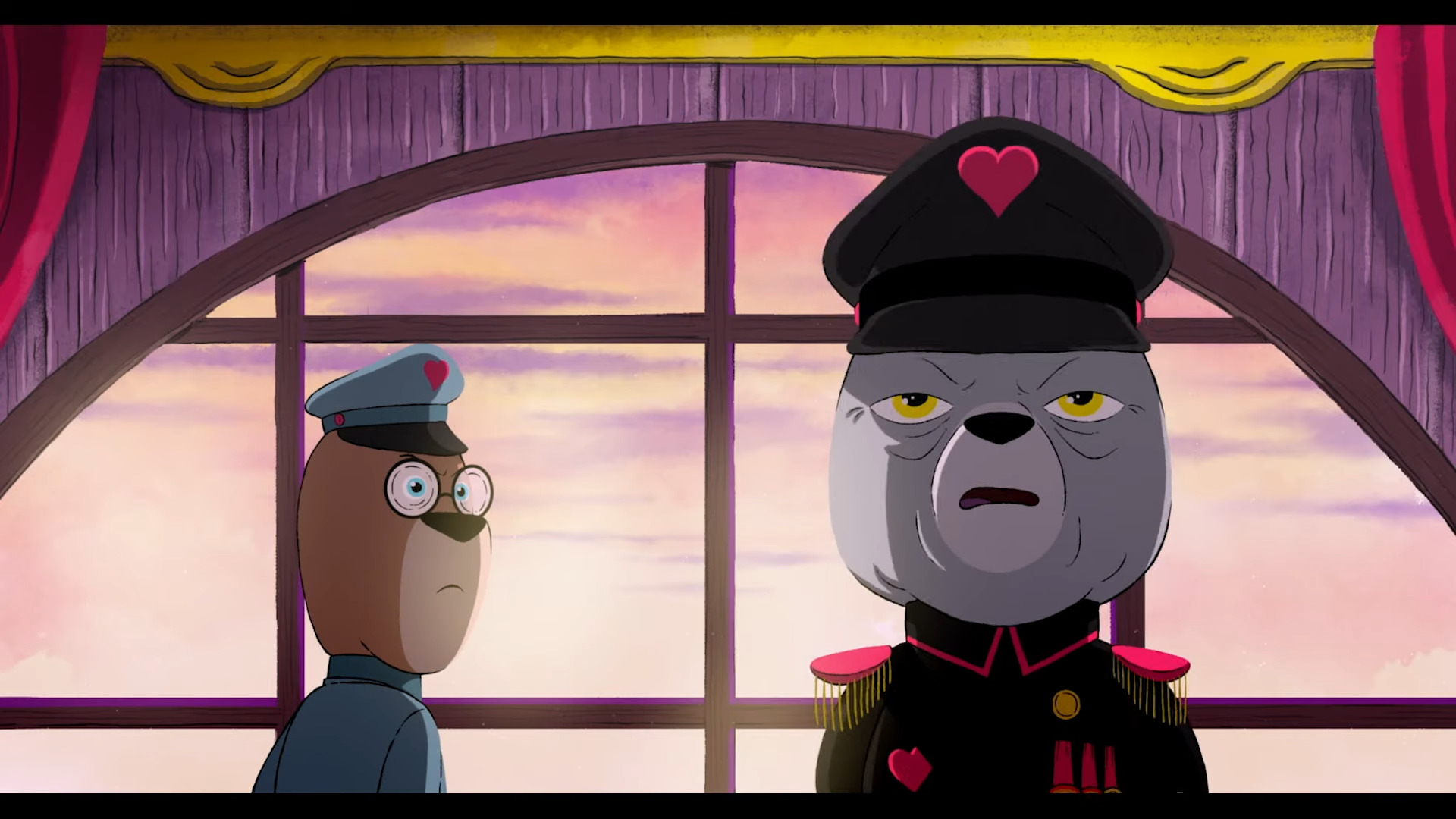 At the end of it’s run time, I walked away confused regarding just exactly who the film’s target audience was supposed to be.

Despite being an animated film, the film is obviously far too graphic for a younger audience. 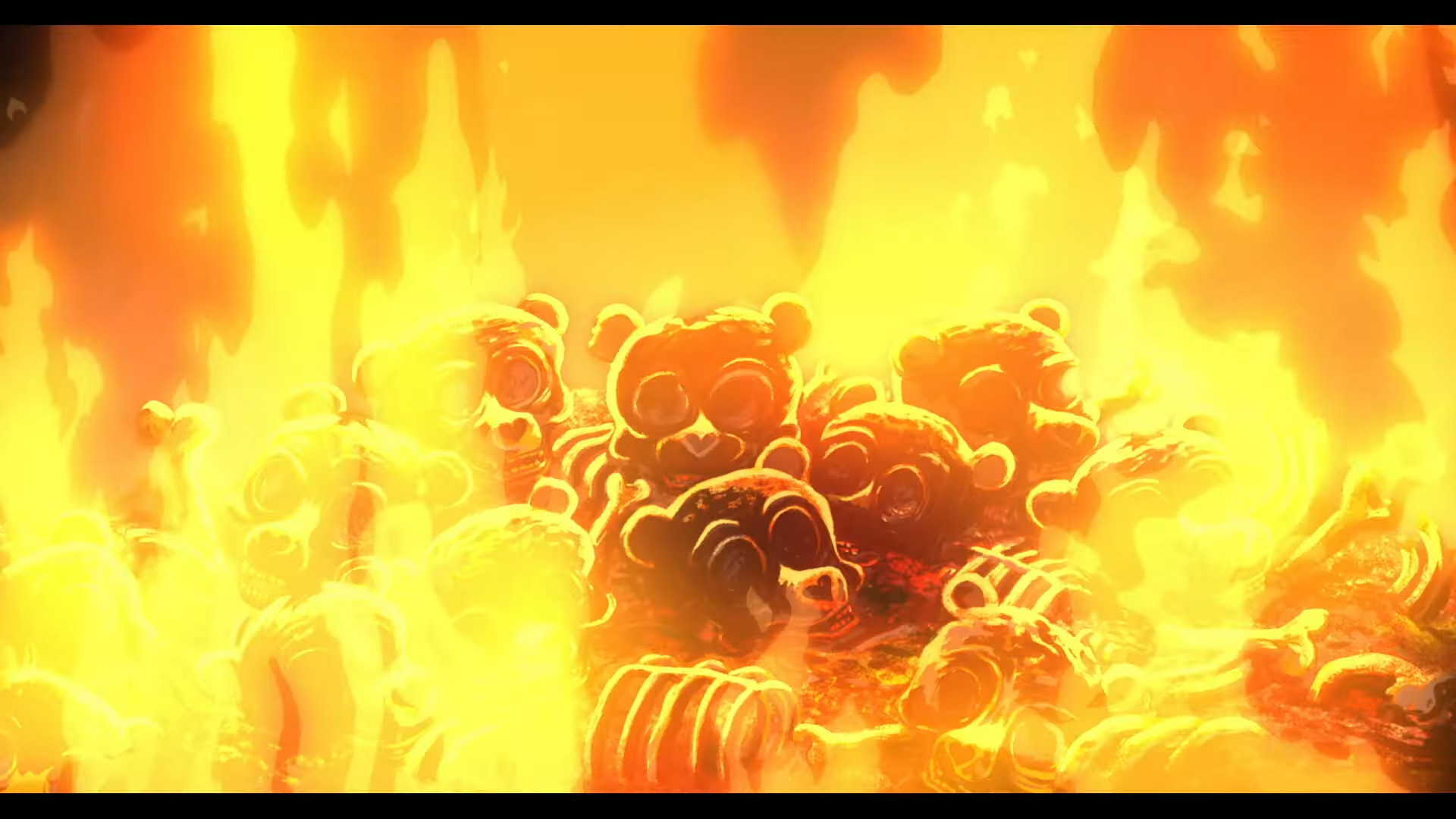 At the same time, adults will likely be turned away by the way the film spits in the face of religion, takes pleasure in dumping a buttload of teddy bear intestines in your lap, and ultimately fails to provide any sort of redeemable message.

Viewers might also be put off the film’s astonishing disregard for fostering an emotional investment in or attachment to specific characters.

While GKIDS does distribute more adult animated films from time to time (Evangelion 3.0+1.0 Thrice Upon a Time comes to mind), the picking up of Unicorn Wars by the distributor perhaps best known for handling the releases of Studio Ghibli feels bizarre – like Nickelodeon airing Fritz the Cat unedited and on repeat. 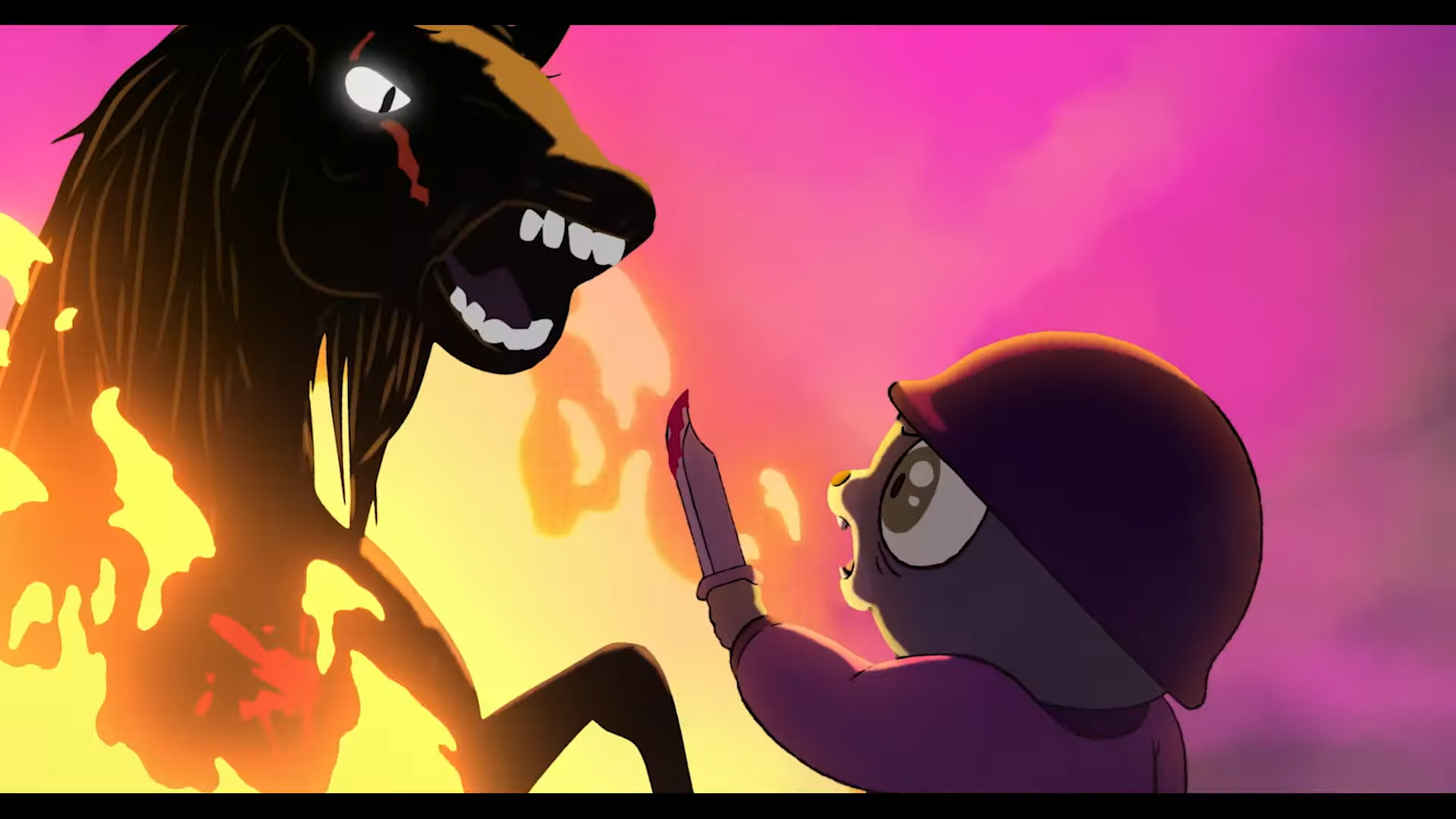 With rainbow caterpillars having everyone tripping balls in the middle of the forest, bear openly whipping out their genitals to urinate, and a brotherly love between more than two characters that borders on the sexual, Unicorn Wars is a blood infused and adorably amputated blend of the Full Metal Jacket and the aforementioned Happy Tree Friends that horrifies and nauseates more often than it impresses.

NEXT: ‘The Woman King’ Review: A Fantasy That Runs From The Truth