Fans have been hotly debating The Super Mario Bros. Movie following the release of the film’s first official trailer, particularly Chris Pratt’s performance as Mario, and whether it needs to be “fixed” before it hits theaters next year.

In general, the reception for the upcoming film has been overwhelmingly positive. For the time being, fears the movie would rely on Illumination’s typical crude humor, pop-culture references, and pop music soundtrack have been abated. Some fans have one major gripe however; Pratt’s performance as Mario.

Long before the trailer’s debut — and combined with Pratt’s then-recent announcement he would be voicing Garfield in an upcoming movie — the internet felt the actor had been miscast as the beloved video game icon.

Chris Meledandri — co-producer for The Super Mario Bros. Movie, CEO, and founder of Illumination — threw his support behind Pratt’s and his performance as the iconic video game plumber. “When people hear Chris Pratt’s performance, the criticism will evaporate,” he told Deadline earlier this year.

After strenuously reminding readers it would be a voice-over roll, Pratt insisted that his performance as Mario had been “updated” in an effort to put fan concerns to rest.

“I worked really closely with the directors and trying out a few things and landed on something that I’m really proud of and can’t wait for people to see and hear,” Pratt said in June during an interview with Variety.

The actor elaborated, “It’s an animated voiceover narrative. It’s not a live-action movie. I’m not gonna be wearing a plumber suit running all over. I’m providing a voice for an animated character, and it is updated and unlike anything you’ve heard in the Mario world before.”

In the debut trailer, Pratt clocks in at around seven seconds of dialogue and two lines; excluding yelling and gasping, of course. Despite having so little to go on, some fans have objected to his performance in The Super Mario Bros. Movie compared to Charles Martinet’s in the games — who, as of 2018, holds the Guinness Record for the most video game voice-over performances as the same character.

It should be noted this author hears a slight Brooklyn, New York accent from Pratt, possibly evoking both Lou Albano in The Super Mario Bros. Super Show! and Bob Hoskins in 1993’s rather infamous Super Mario Bros. live-action film.

Interestingly enough, Mario’s voice actor in the French version of the trailer has been a hot topic of debate, as a vast majority of fans have noticed that his interpretation of the heroic Italian plumber’s voice sounds eerily similar to the one Charles Martinet has given the character in the games.

While Pratt’s performance has more than a few defenders, the majority seem to argue that Chris Pratt is merely doing his normal speaking voice; quickly taking to social media to comment on the actor’s performance as the iconic character.

“This is literally the funniest possible outcome,” mocked @lovefromjudith. “He said he was spending a bunch of time working on it, he said it would be a new take on mario. he said it wouldn’t be his normal voice, and it is. lol lmao”

Some even argued the lack of a heavy Italian accent was more offensive. “The entire premises of Mario is he’s ITALIAN. You see Mario and you think PASTA. To erase his voice, such a key part of his persona is disrespectful,” @tthankunextt denounced. “Considering every other appearance of the Italian accent is mocked in the media, removing the ONE where it’s not is shameful.”

As animated by Twitter user @DavidToons_, one of the more damning criticisms was comparing Pratt’s performance in The Super Mario Bros. Movie to that of John Roberts’ Linda Belcher from Bob’s Burgers.

Chris sounds like Linda from Bob's Burgers, so as an animator: this had to be done. https://t.co/glfQdgfFXH pic.twitter.com/WgJauwIW1w

Others instead were hopeful for Martinet to reprise his role as Nintendo’s “Jumpman” in The Super Mario Bros. Movie, despite being only being cast as a yet-to-be-disclosed voice cameo.

“Its so f—ked up how Charles Martinet has to sit there and just watch someone voice a character he’s been voicing since literal forever bring absolutely nothing to the table,” @merctrio lamented. “The most lifeless performance ever. Like Charles in the movie too and he’s just NOT MARIO SOO F–KED UPPP.”

Some denounced the idea of Martinet voicing Mario however. “Look folks, let’s be real… Charles Martinet can not do the iconic Mario voice from the video games for an entire film,” YouTuber Shane Luis argued. “It works for short bits in the game series but would be an incredibly annoying voice in a film. There is a reason he rarely speaks in cutscenes.” 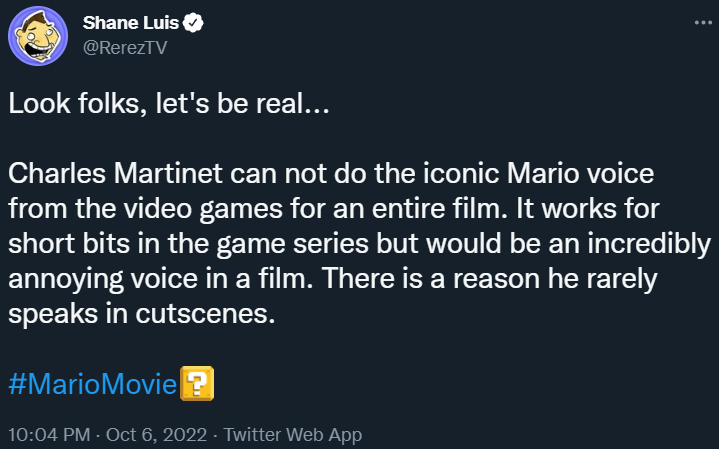 “‘Martinet couldnt [sic] voice mario in the movie his voice would get grating really fast’ you realize that charles martinet is a professional voice actor who has been voicing mario for decades and has incredible vocal range?” @possquee defended. “Im [sic] sure he is more than capable of toning down the voice a tad to comfortably fit movie dialogue.” 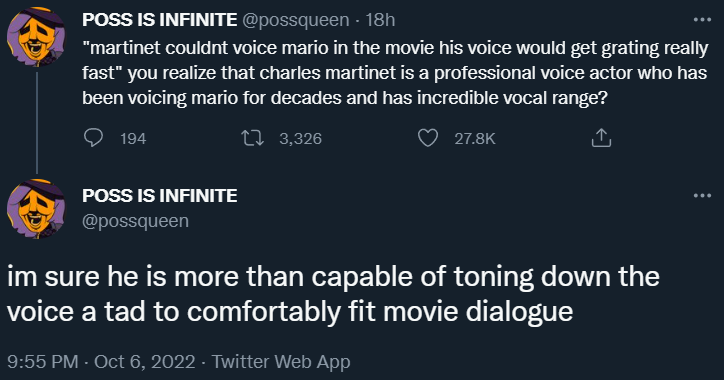 “Do you really think Charles Martinet could voice Mario for a whole movie?” @newdarkcloud rhetorically asked. “Yes. Yes, I believe that classic trained actor Charles Martinet can absolutely voice the role of movie for a theater-length movie. The question is absurd.”

Alluding to the aforementioned French trailer for The Super Mario Bros. Movie, other users took to social media to draw comparisons between Pratt’s delivery and the Western European voice actor for the titular character.

“The fact that the French dub got Mario to sound exactly like Mario is even further proof Charles Martinet was robbed off his role because they wanted some Hollywood celebrity on the credits,” @jupy314 theorized.

This desire for a voice closer to the games may explain why some have tried to “fix” what they can from the first The Super Mario Bros. Movie trailer. Some, like agameofantasy simply laid voice clips from the game over the trailer, as well as in another clip shared by IGN.

Voice actor Jesse Pinnick (Ringo Fuji in 8SEN, Endou in Higehiro, The Guide in Pitstop in Purgatory) even dared to throw his hat into the ring, sharing his take on the line uttered by Pratt but in Martinet’s iconic voice. “If Mario sounded like this in the movie, I will quote this movie to my grave,” Jesse declared.

If Mario sounded like this in the movie,
I will quote this movie to my grave #SuperMarioMovie #voiceactor pic.twitter.com/j32NHNmqZb

Do you think Pratt’s voice-over works for The Super Mario Bros. Movie? Should Martinet return? Will this end up like another “Ugly Sonic” moment, with some last second changes to quell outrage?

The Super Mario Bros. Movie is set to hit theaters on April 7th, 2023.