CD Projekt co-founder and Joint CEO Marcin Iwiński has announced he will be stepping down by the end of 2022, revealing that he still intends to remain a major shareholder in the company. 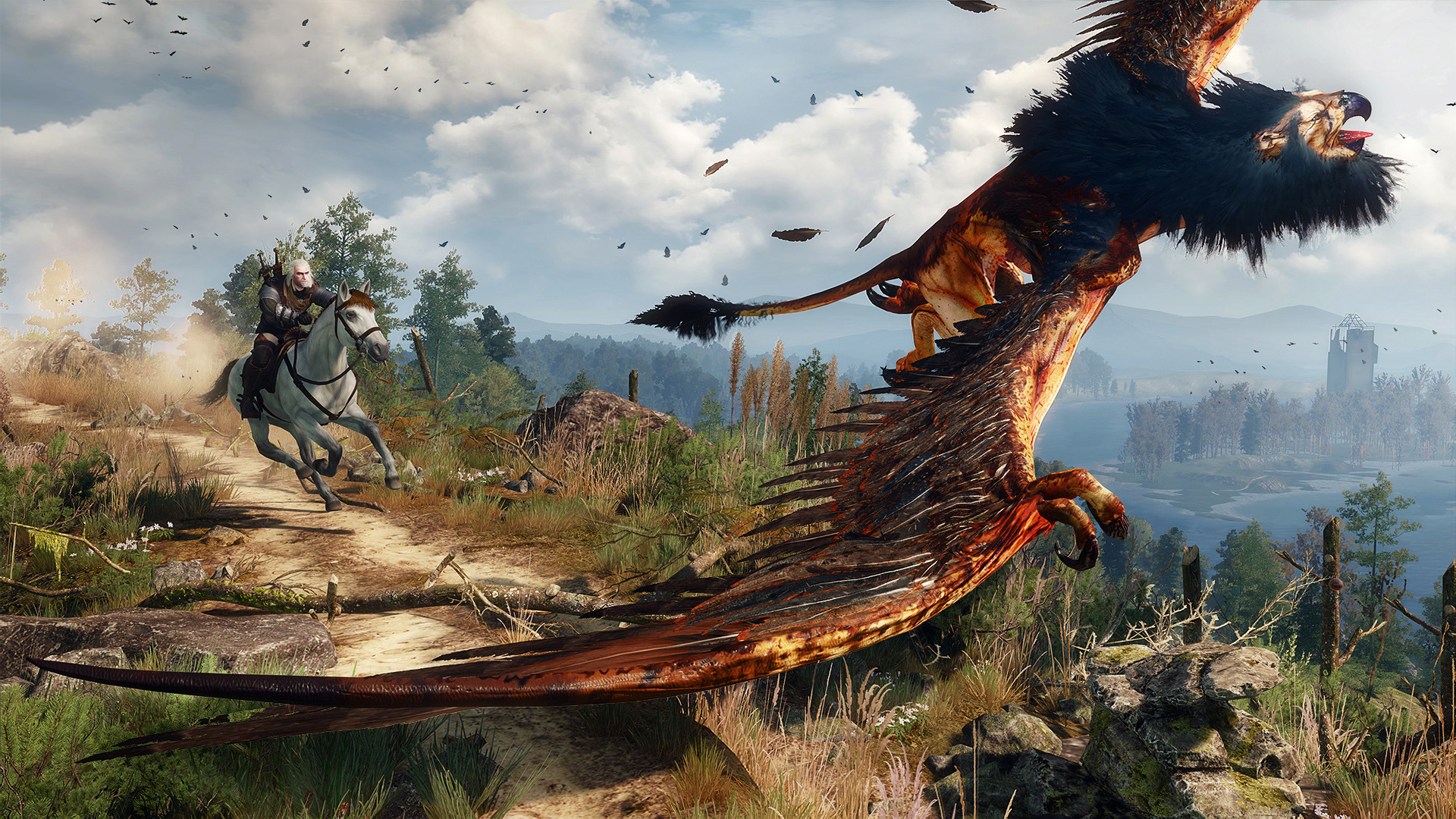 In a statement shared via CD Projekt’s investor relation’s Twitter, “Hi everyone, Today I have some news that’s both important to me and to the company,” Iwiński opened.

“I am beginning a brand new personal chapter at CD PROJEKT, as I will submit my candidacy for the role of Chairman of the Supervisory Board, leaving behind my Joint CEO role,” Iwiński revealed. “By the end of 2022, I’ll hand over my duties to my colleagues from the board.” 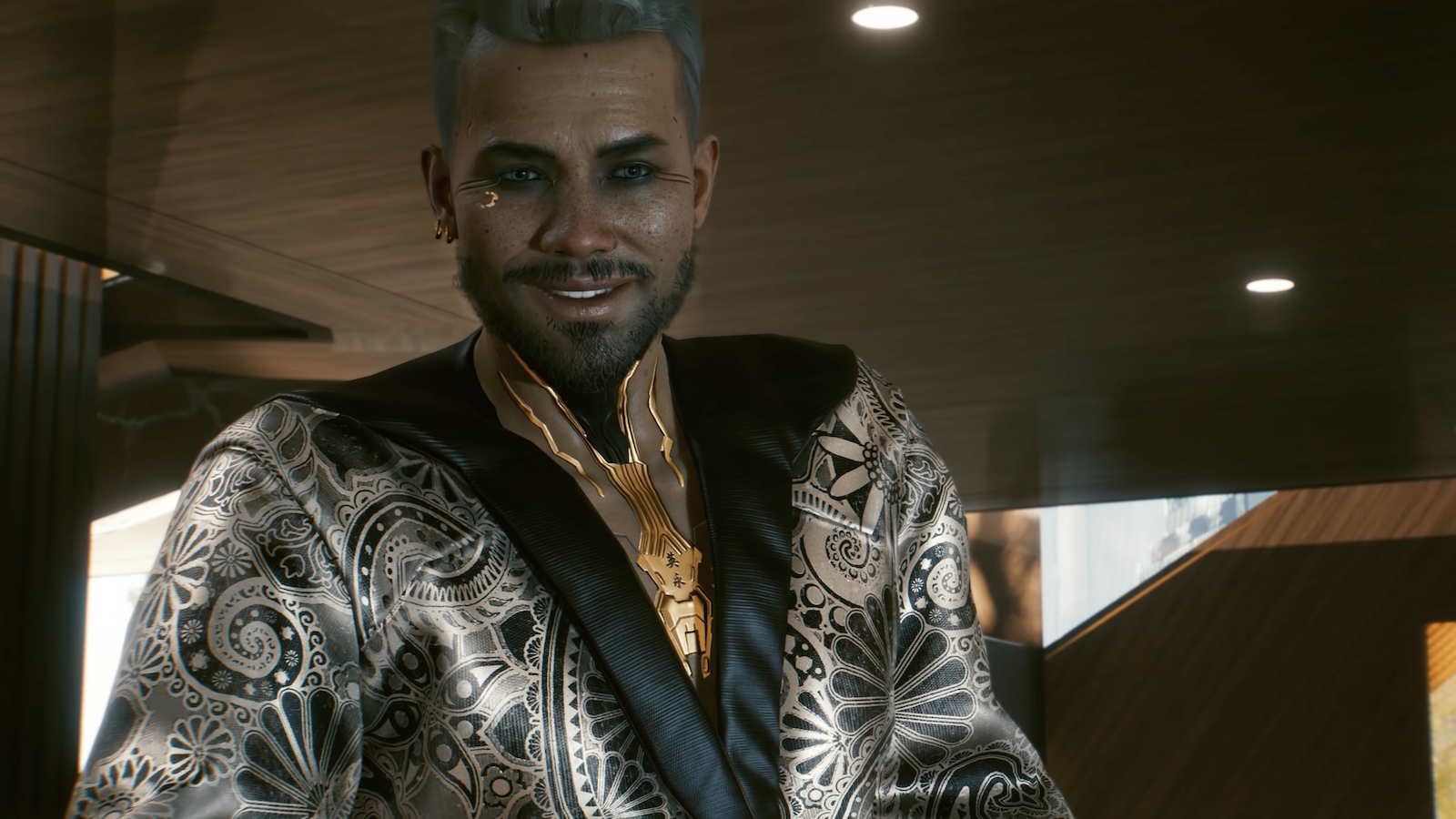 “For me, this is a huge moment. I’ve been at CD PROJEKT for almost 30 years and I have seen it go from a handful of passion-driven rebels to an internationally recognized developer of story-driven role playing games loved by millions globally,” he boasted.

The CD Projekt co-founder recounted, “Back when Michał Kiciński and I founded the company, I don’t think either of us would have been able to imagine this incredible journey, not even in our wildest dreams.” 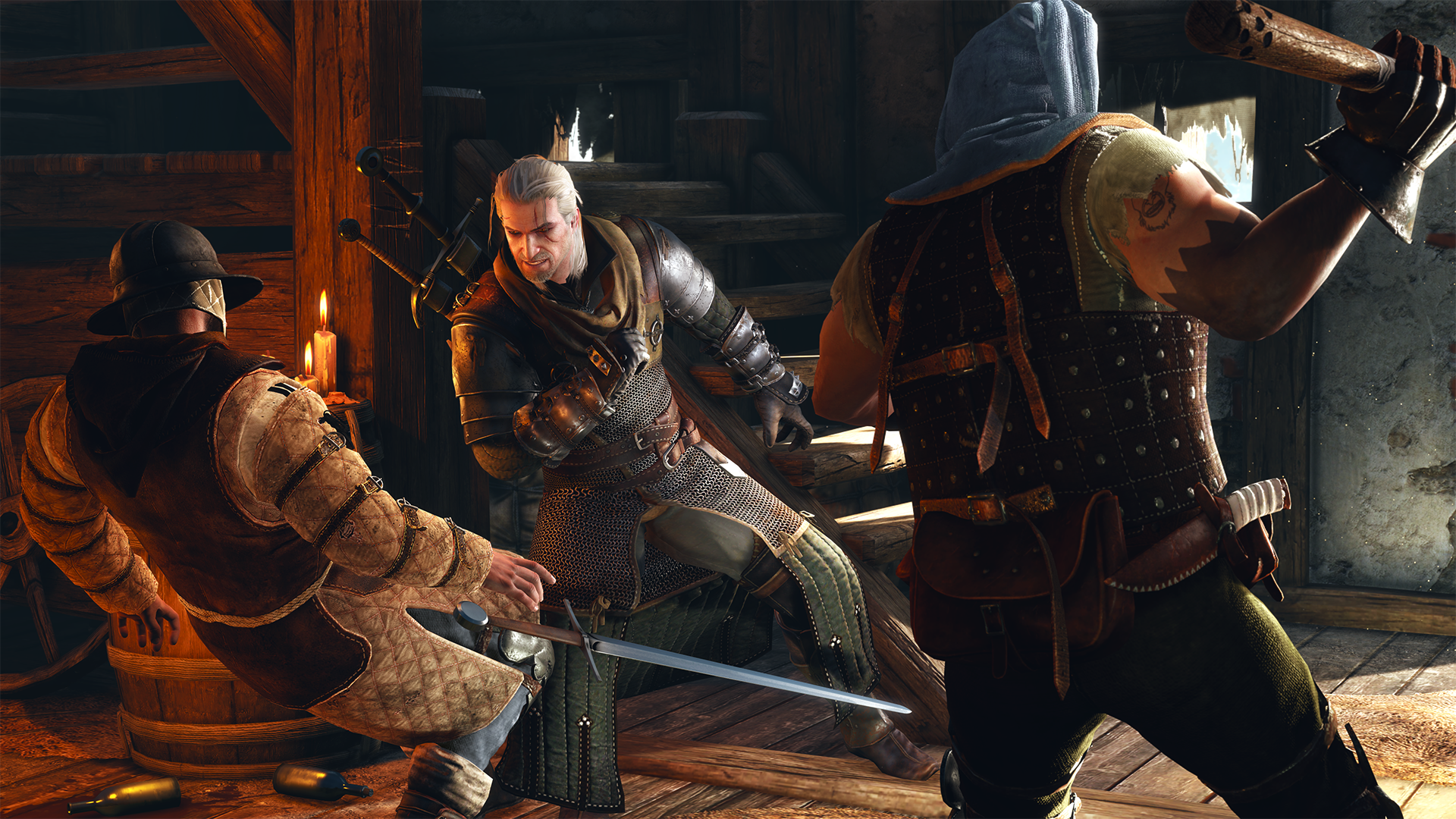 “When I think about the future of CD PROJEKT, it is so exciting for me,” Iwiński admitted. “Today, the company consists of over 1200 people across offices all over the world. But CD PROJEKT has never been about physical place or scale — it’s all about the huge amount of talent we have, and the hard work and dedication of everyone who chooses to work here.”

“It is thanks to that commitment and amazing talent that right now I have that same feeling I had all those years ago — hunger and optimism for what’s ahead. It really feels like this is only the beginning,” he further declared. “Our hugely ambitious strategy has such an inspiring and strong team at the helm, and I deeply believe in our plan to take CD PROJEKT to new heights.” 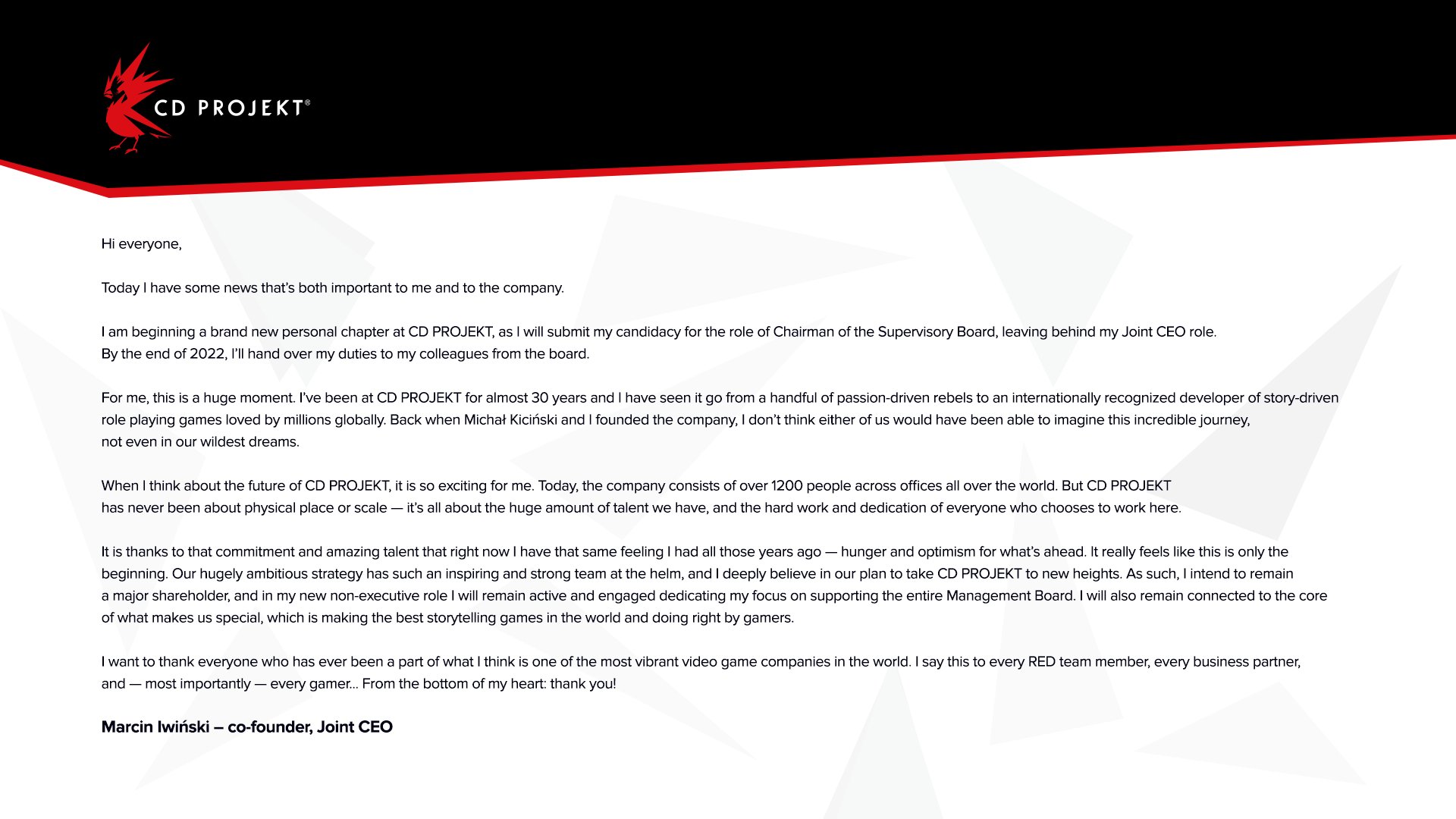 Iwiński then revealed, “As such, I intend to remain a major shareholder, and in my new non-executive role I will remain active and engaged dedicating my focus on supporting the entire Management Board. I will also remain connected to the core of what makes us special, which is making the best storytelling games in the world and doing right by gamers.”

“I want to thank everyone who has ever been a part of what I think is one of the most vibrant video game companies in the world. I say this to every RED team member, every business partner, and — most importantly — every gamer… From the bottom of my heart: thank you!” he concluded. 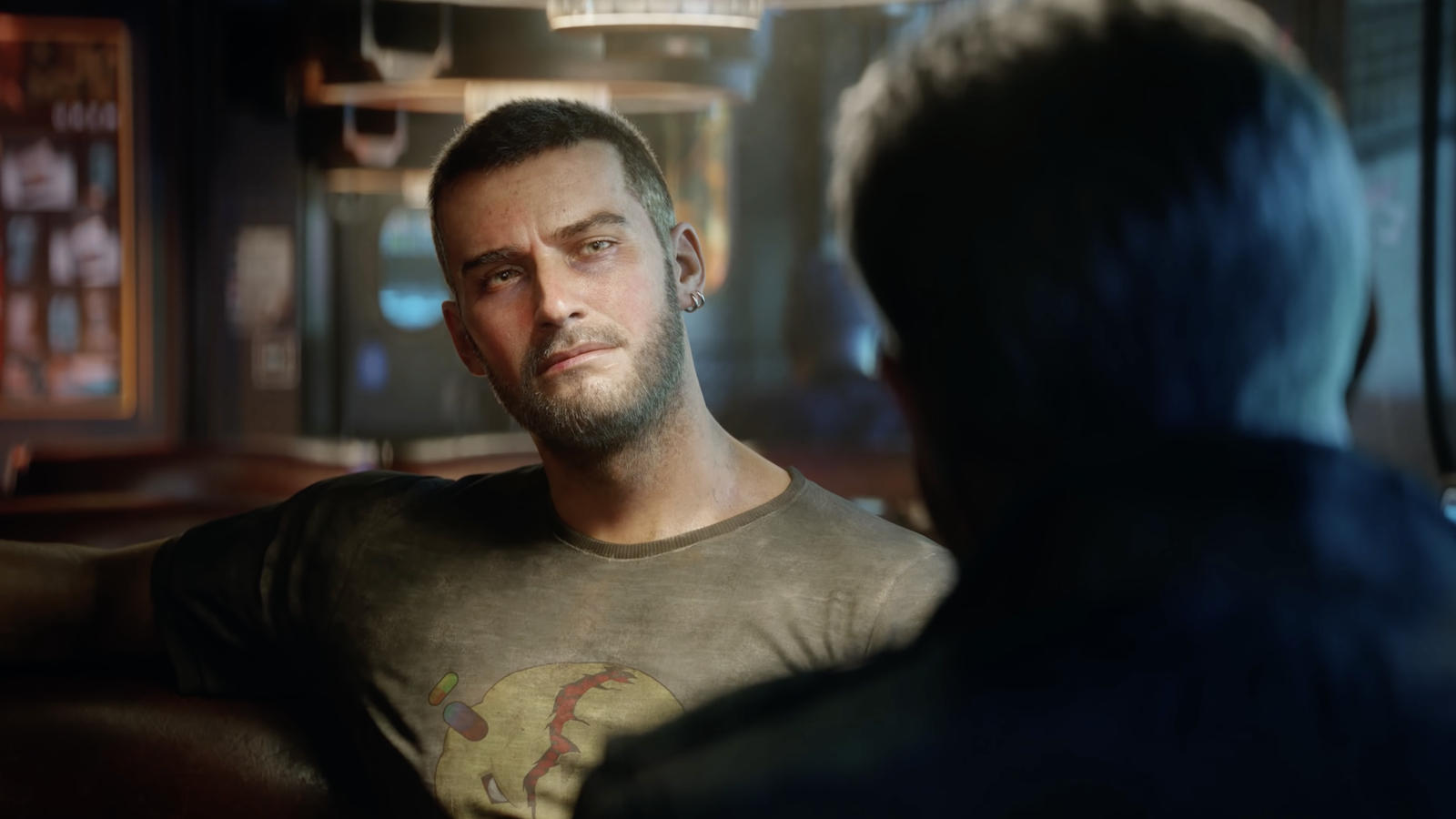 Iwiński’s comments came the same day as several other announcements from CD Projekt. The announcements included a sequel to Cyberpunk 2077 — dubbed “Project Orion” — with development beginning after the Phantom Liberty expansion’s release. Starting with “Project Sirius” by developer The Molasses Flood, The Witcher will also see a new trilogy come to fruition.

A new RPG IP dubbed “Hadar” from CD Projekt Red and undisclosed mobile titles are also in the works. CFO and Member of the Board Pitor Nielubowicz promised CD Projekt’s goals would “boost development abilities to deliver more content to gamers with a prime focus on quality”, “introducing multiplayer experiences,” and to “expand enduring franchises.”