Classic video games never die. Rather, they get dumped, dissected and hacked by talented people with way too much time on their hands, and a passion for their favorite titles. When people think of the term “rom hack,” they probably envision Sonic the Hedgehog barreling around in a Super Mario Bros. game, but that’s not always the case. In fact, some of the greatest rom hacks actually improve, or modernize old titles for better playability, and a much more satisfying game experience. 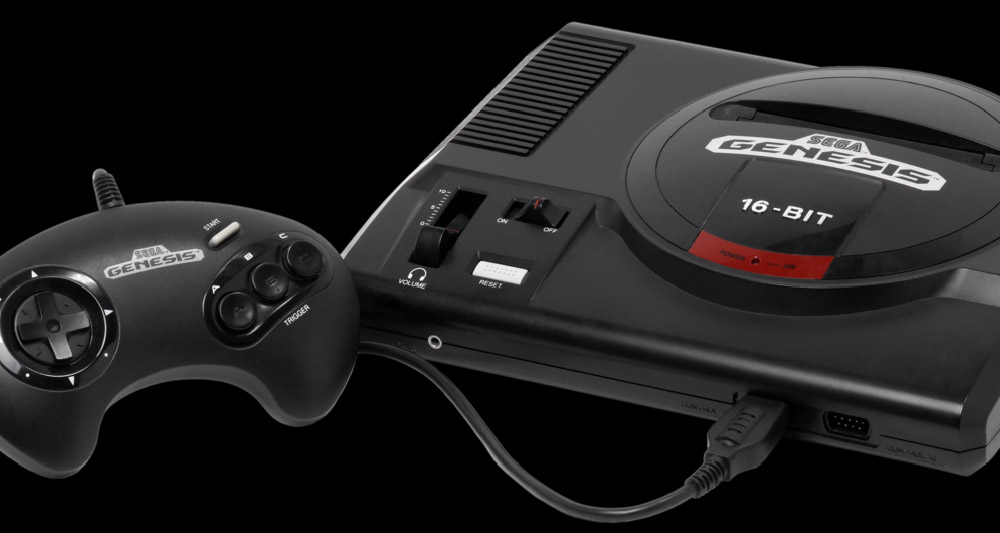 The Sega Genesis has been a favorite target for rom hackers over the years, and the community has cranked out some of the coolest hacks imaginable. These rom hacks are actually useful, and classic gaming aficionados should definitely give them a shot, just to experience the difference.

NOTE: Bounding Into Comics does not condone piracy. You will need to obtain a legal copy of each rom in order to apply the desired hacks. Instructions are provided on each hack’s official page. Links are in each entry. 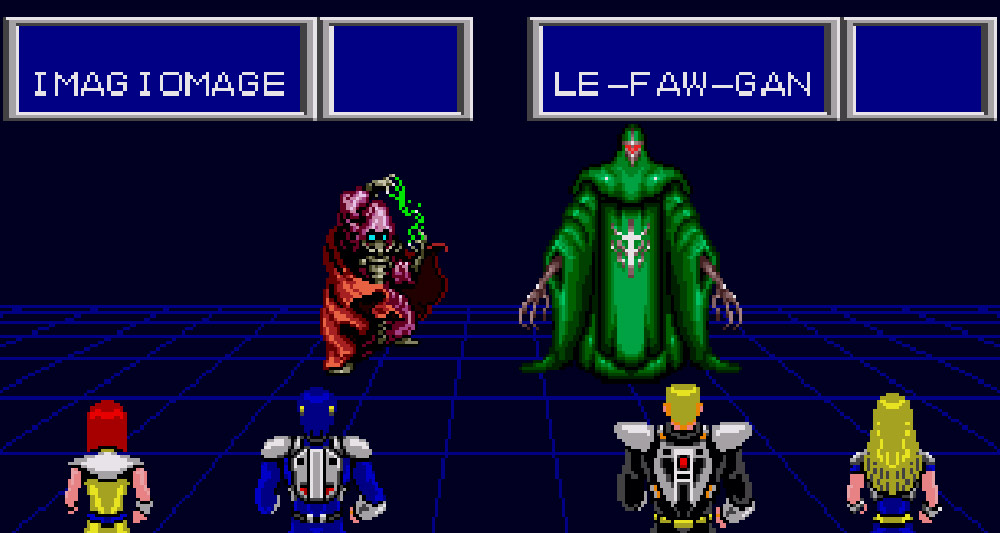 Phantasy Star II was something of a sleeper hit when it debuted in 1990, kicking off the decade by introducing a new generation of gamers to the concept of a hardcore Japanese RPG. Fans of the original Phantasy Star on the Sega Master System were pleased with the changes made to the sequel, especially in terms of map navigation. However, by today’s standards, Phantasy Star II has an unfriendly user interface, a crushing difficulty curve, and forced grinding that does little besides waste time. 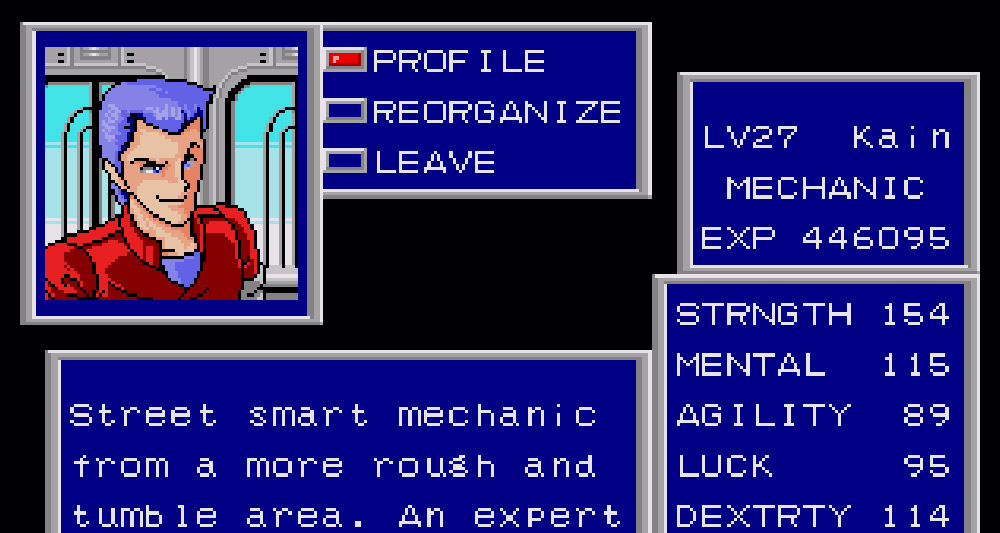 Fauntleroy’s Modernization hack tweaks the game in some rather dramatic ways, making it more palatable for modern-day first-time players. It streamlines the inventory and technique blocks, while balancing out the difficulty curve, crushing bugs, and making changes to the story script. The next version of the hack should tackle other issues, such as the less-than-perfect camera system, and the user interface, but this is a definite step in the right direction for Phantasy Star fans who want to avoid the monotony of tedious grinding. 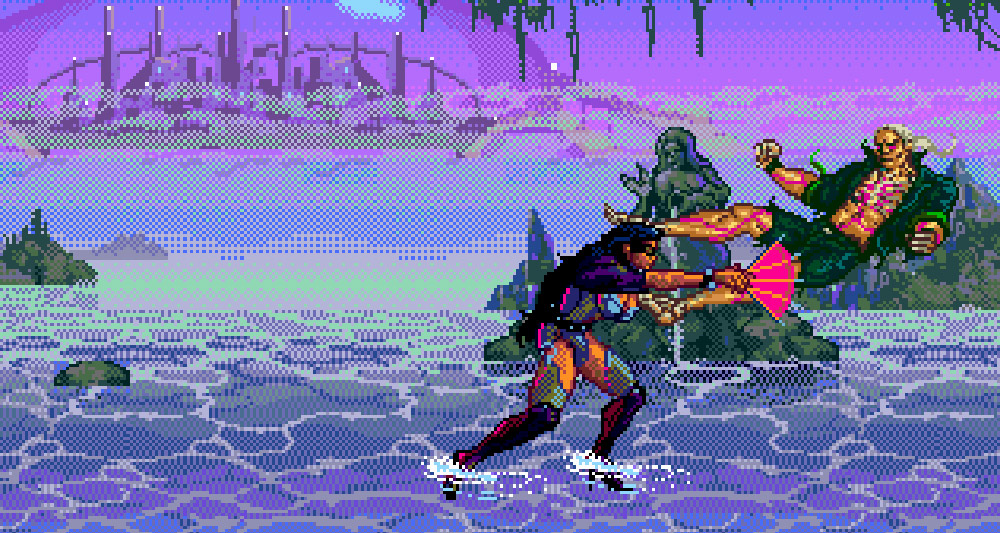 Eternal Champions was Sega’s attempt to replicate the feverish success of one-on-one brawlers like Street Fighter II and Mortal Kombat for its own console platform. The original debuted to a respectable amount of praise, but it was quickly overshadowed by its Sega CD counterpart, which blew it out of the water. Nevertheless, many diehard fans still prefer the Genesis original. 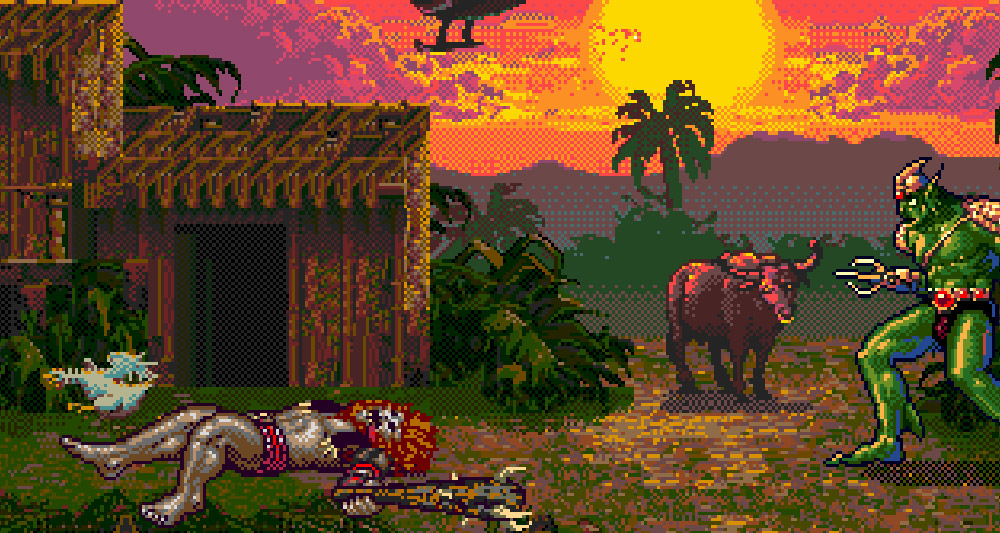 BillyTime! Games’ Eternal Champions Special Edition hack tries to rebalance the game mechanics for a smoother and more accessible experience. The Inner Strength system has been optimized, stage overkills are now easier to pull off, and certain characters have been tweaked for balance. The hit stun mechanic has also been reworked for the purpose of pulling off Killer Instinct-like combo attacks for extra flair. 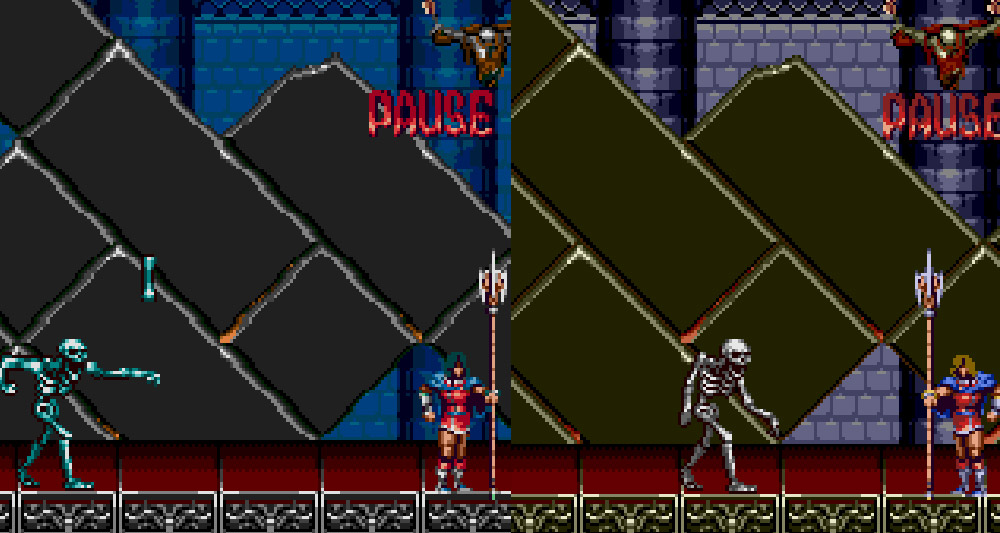 A color palette comparison between the original and hacked versions of ‘Castlevania: Bloodlines’ (1994), Konami

Castlevania’s debut on the Sega Genesis was nothing short of spectacular. Konami utilized the Genesis video and sound hardware to its advantage, creating an eerie and atmospheric title dripping with gothic style. It was also a bloodier and more macabre offering than anything seen on Nintendo’s consoles. All this, plus a fantastic set of game mechanics, and two separate characters to choose from, both with branching paths. 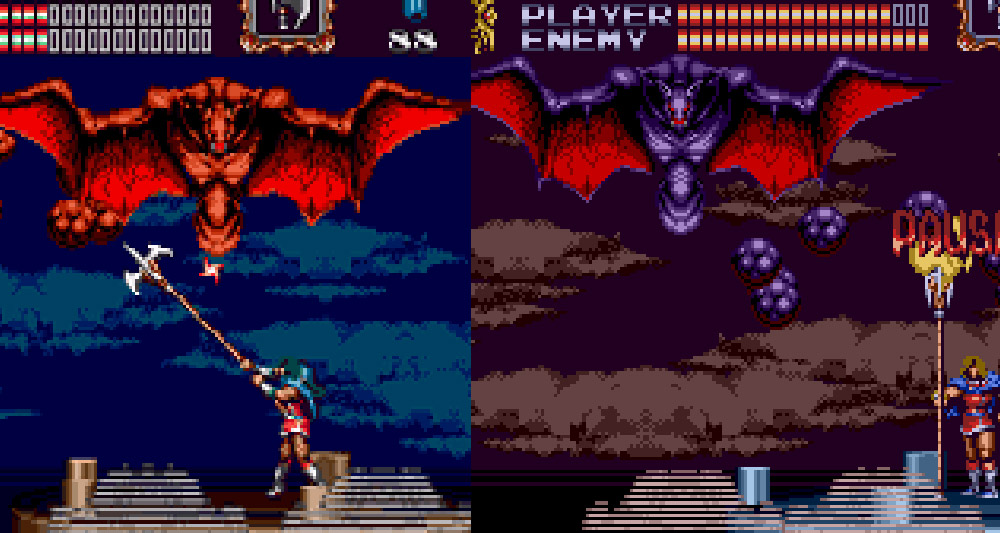 A color palette comparison between the original and hacked versions of ‘Castlevania: Bloodlines’ (1994), Konami

For that reason, Pyron’s Castlevania: Bloodlines Enhanced Colors hack is arguably the best approach for the game. It doesn’t change any of the underlying fundamentals or play mechanics. Rather, it reworks the color palette to look more authentic, ancient and stylish. Character and enemy sprites also get a makeover, as well as shading enhancements for more depth and polish. Visually, it’s the ultimate way to experience Castlevania: Bloodlines. 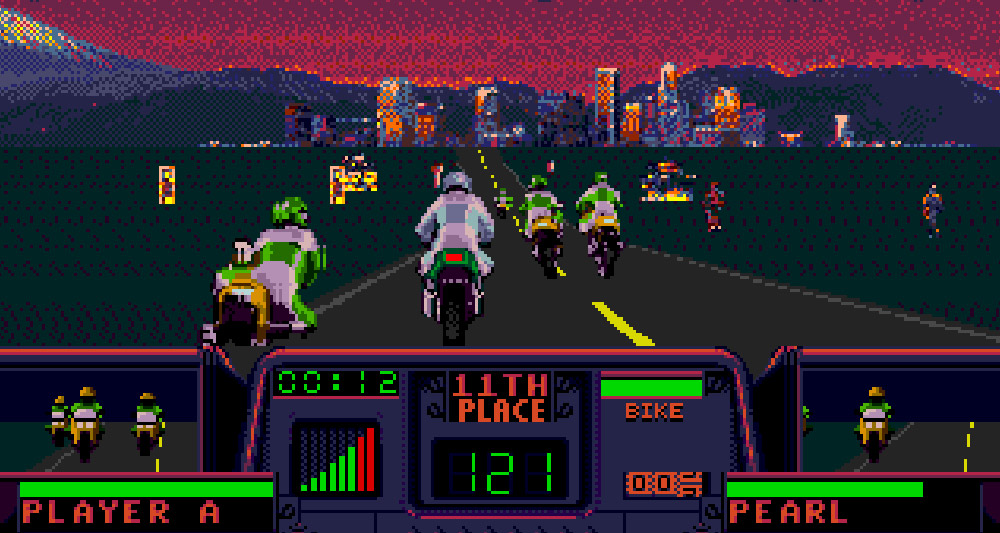 Sega’s classic Road Rash titles on the Genesis are the stuff that legends are made of, but the third in the franchise is widely regarded as the most flexible and fun to play. That being said, the game was hamstrung by a poor framerate that would be considered absolutely unacceptable by today’s standards. 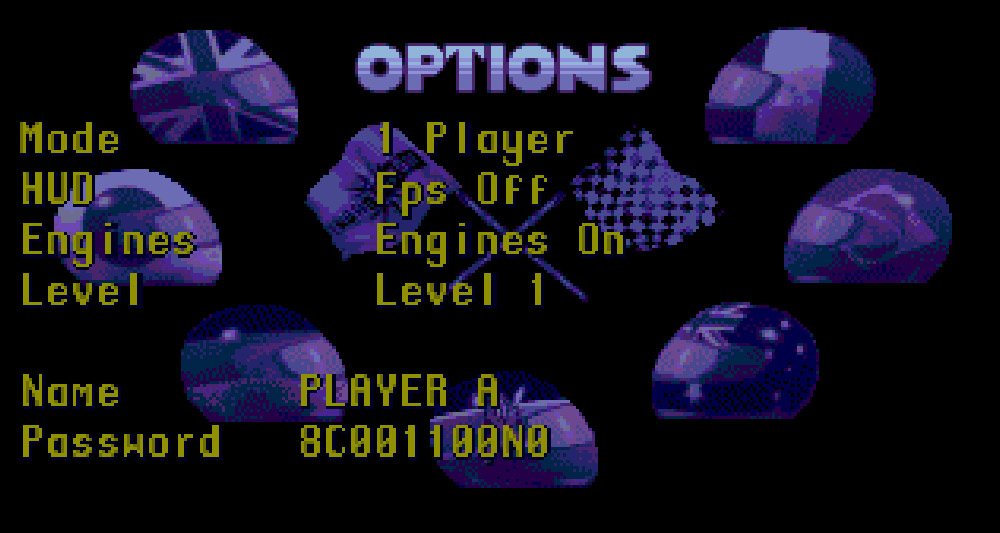 Ti’s Road Rash 3 Improvement hack fixes this, while introducing a host of other enhancements as well. First, the framerate has been mercifully raised, much the same way that SuperFX chip emulation allowed Starfox to run far better than on original SNES hardware. The hack also includes a host of bugfixes, 6-button controller support, and the ability to play MP3s when using Mednafen’s Doomsday emulator mod. 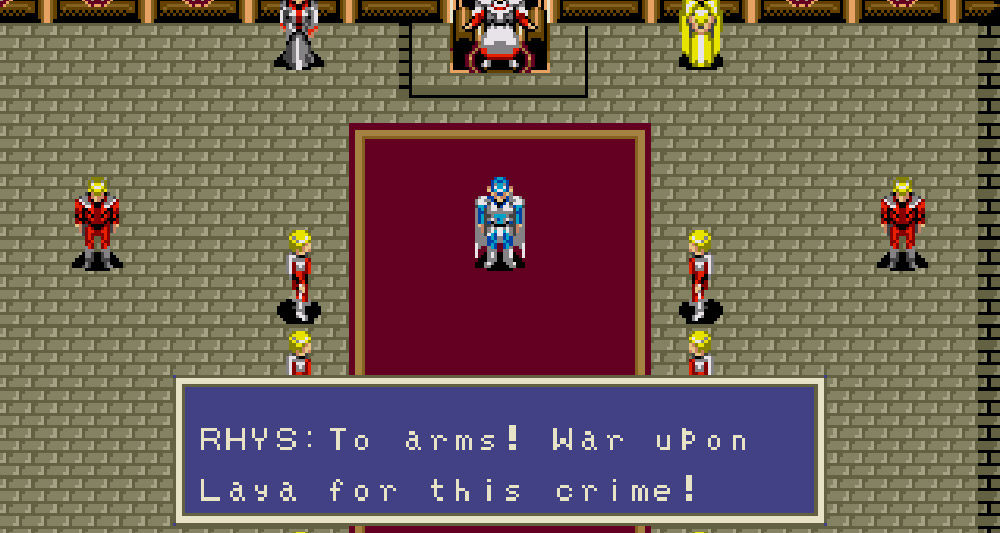 Phantasy Star III is widely regarded as the underdog of the original RPG franchise, despite all it had to offer in terms of an expansive, multi-generational storyline. Still, diehard fans of PSIII still enjoy it to this day. It lacked the pizazz and flash of its immediate predecessor, but it more than made up for it with an involving storyline that ended the series’ chronology. 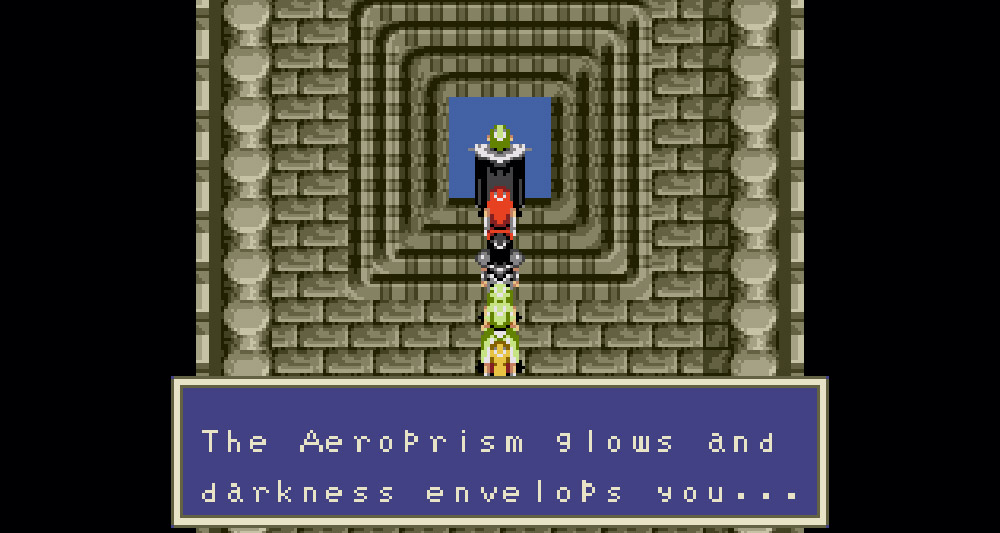 Fauntleroy’s Phantasy Star III General improvement hack is a passion project designed to tweak and balance the game for new and existing audiences. New sections were added into the existing story to fill in gaps and plot holes, while linking back to both Phantasy Star II and IV. Presentation also gets a boost, giving the game a fighting chance to stand out as a major contender. For those who were turned off by Phantasy Star III, this might be a reason to give it another shot. 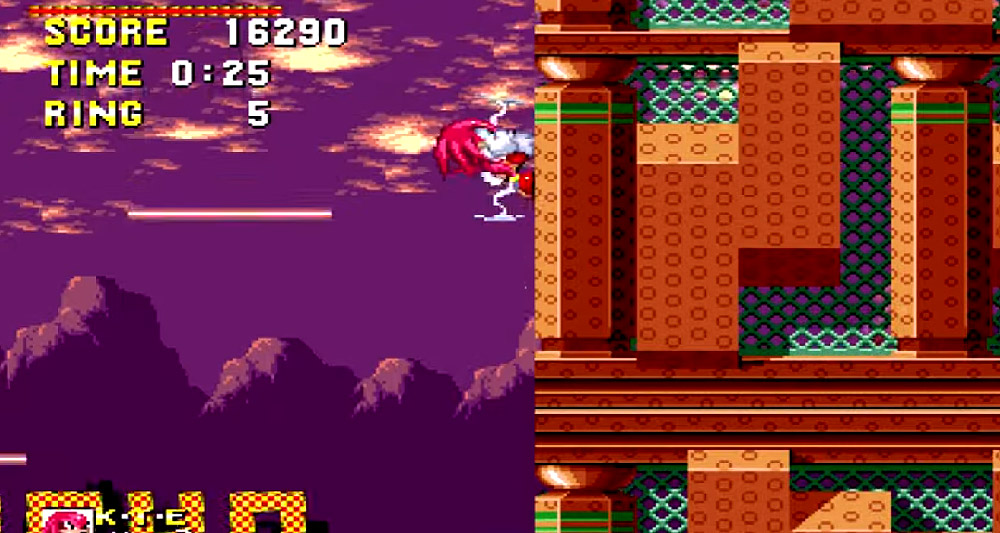 Knuckles in a hacked version of ‘Sonic the Hedgehog’ (1991), Sega

Sonic the Hedgehog is as synonymous with pop culture as Coca-Cola at this point, and both old and new generations know the character well. The original game debuted on the Genesis as a would-be Mario killer that didn’t quite meet its goal, but did manage to create one of gaming’s most endeared franchises. In comparison to its sequels, however, the original Sonic hasn’t aged quite as well. 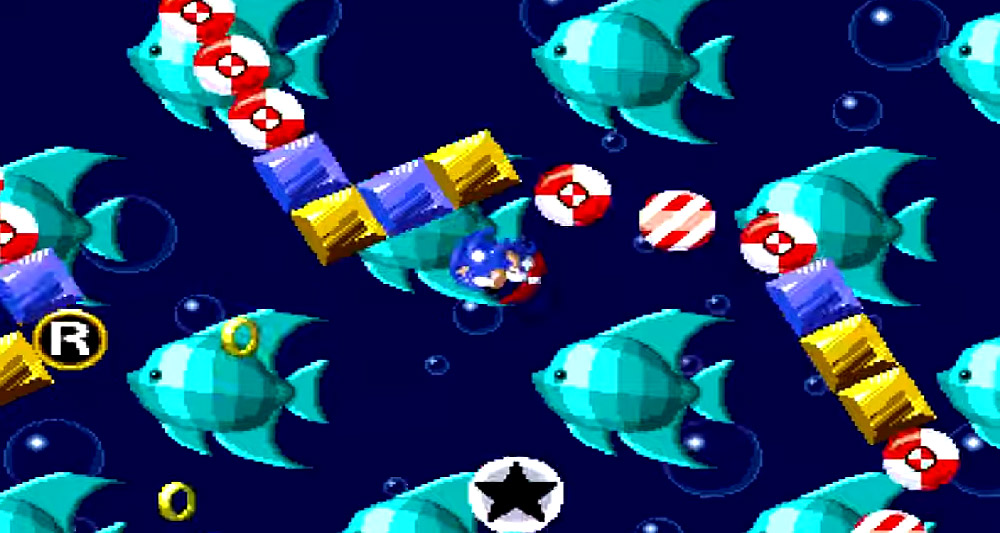 Sonic goes for a Chaos Emerald in ‘Sonic the Hedgehog’ (1991), Sega

Puto’s Sonic 1 Remastered hack aims to fix that by tacking features onto the base game, without altering the level design. It duplicates a few play mechanics from Sonic 2, while adding on features such as carrying existing rings into the next act. In terms of visuals and audio, Sonic 1 Remastered makes a few key changes, while introducing a brand new remixed soundtrack into the game. Unfortunately, the hack hasn’t seen an update since 2007, but it’s still a quaint way to re-experience classic Sonic.

4) SHINING FORCE WAR OF THE GODS+ 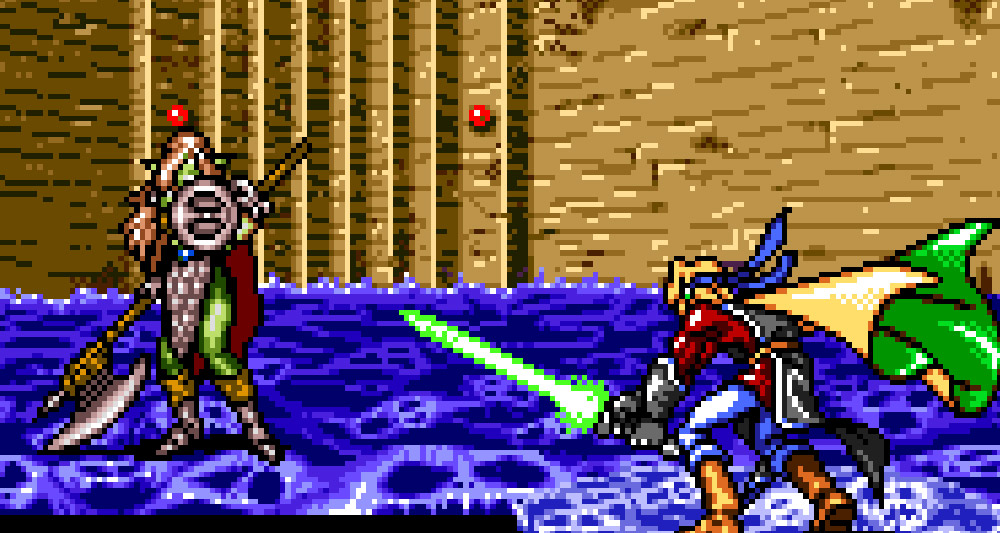 Shining Force was a true gem on the Sega Genesis, mixing RPG mechanics and fantasy storytelling with some of the best tactical turn-based combat around. Shining Force II managed to expand on everything the original offered, creating a more involving and robust title that went above and beyond. 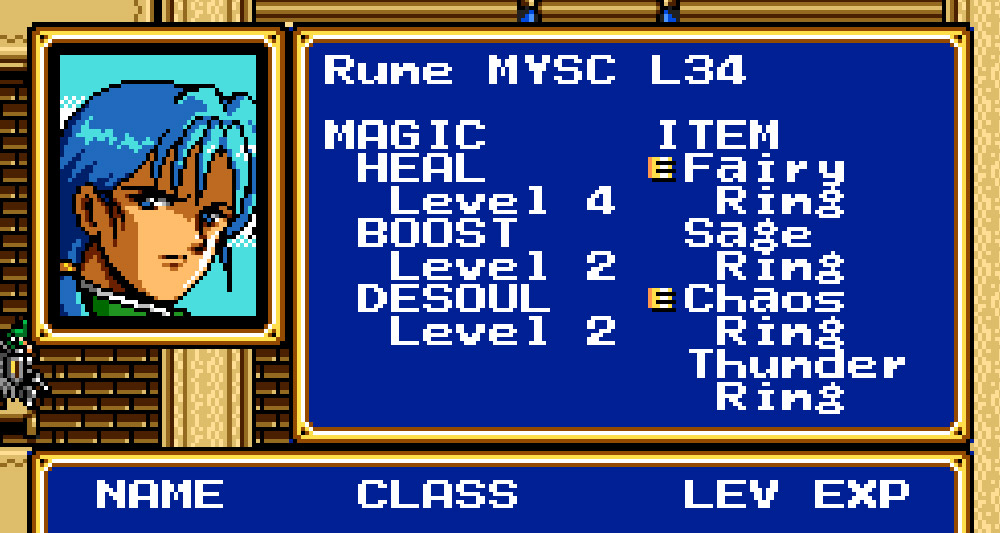 Dark Claw’s Shining Force War of the Gods+ hack further enhances the sequel in a big way, bringing big changes to the gameplay and story elements in an attempt to flesh everything out. The changes to gameplay mechanics are most notable, adding and cutting where appropriate in order to create a stronger balance. It’s one of the coolest ways to re-experience Shining Force II, without blaspheming the stock game. 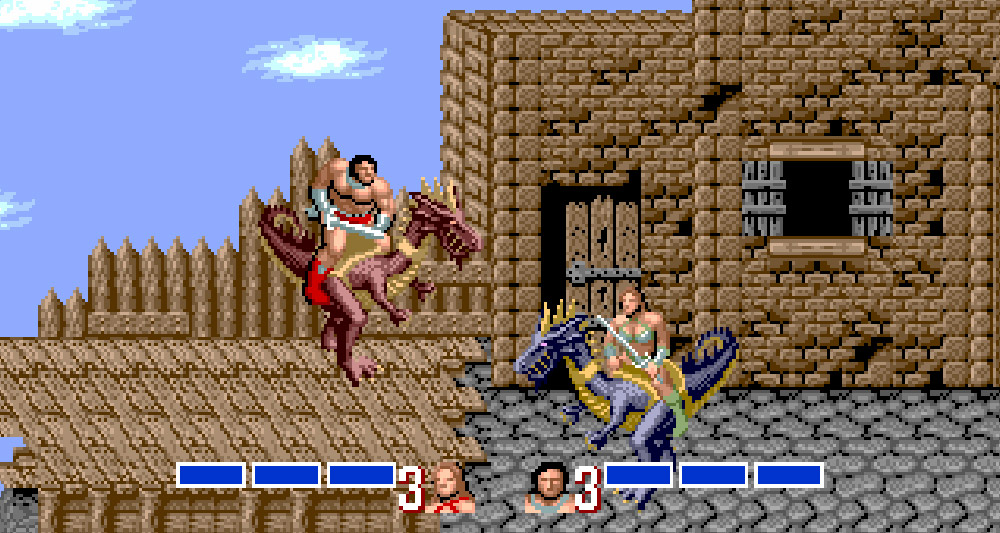 Golden Axe was a textbook example of how Sega’s 16-bit architecture could deliver a near-perfect arcade experience for the home market. As a launch-day title, it helped propel the system to huge success, while giving friends the opportunity to slay foes in a Conan the Barbarian-style fantasy world. Still, for everything it did right, there was obviously room for improvement. 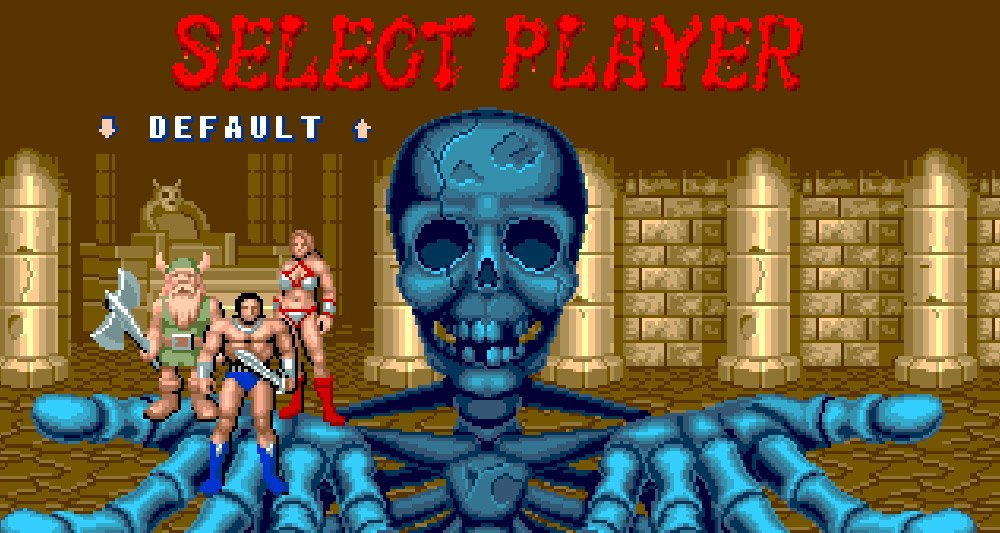 YoSoyNacho’s Golden Axe Plus hack offers a bevy of tweaks and improvements to the original title, from interchangeable magic, new graphics and same character play, to PCM samples lifted from the arcade version, character reskins and a revised color palette. The extra features and changes won’t appeal to everyone, but Golden Axe Plus does deliver an enhanced take on the console classic, with room to spare. 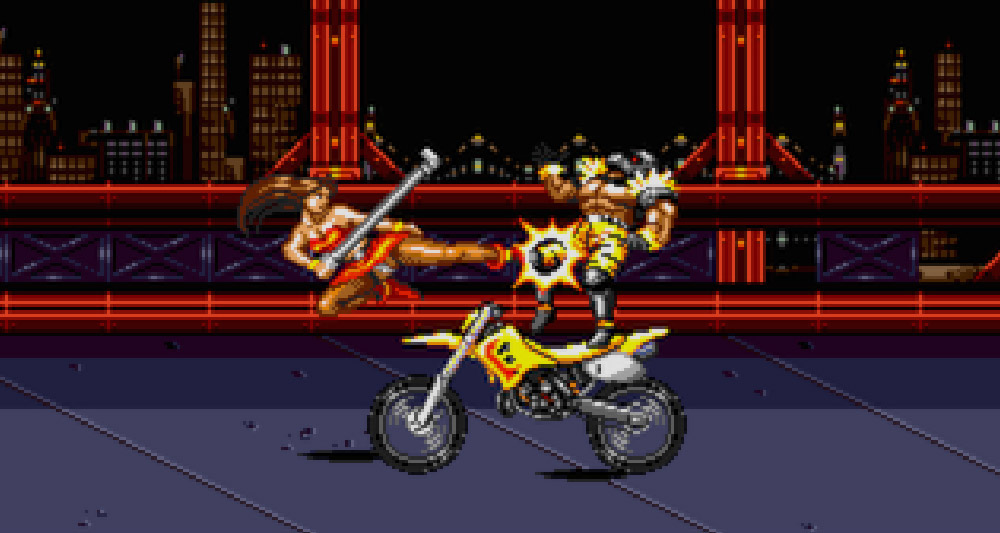 Blaze kicks a thug off a motorcycle in a hacked version of ‘Streets of Rage 2’ (1992), Sega

Streets of Rage 2 is widely regarded as one of the most influential and well-executed 2D side-scrolling brawlers of all time, thanks in large part to its bone-crushing fight mechanics, inventive level design, and of course, a timeless soundtrack by master composer Yuzo Koshiro. However, the U.S. version of Streets of Rage 2 left a few things out of the final release. 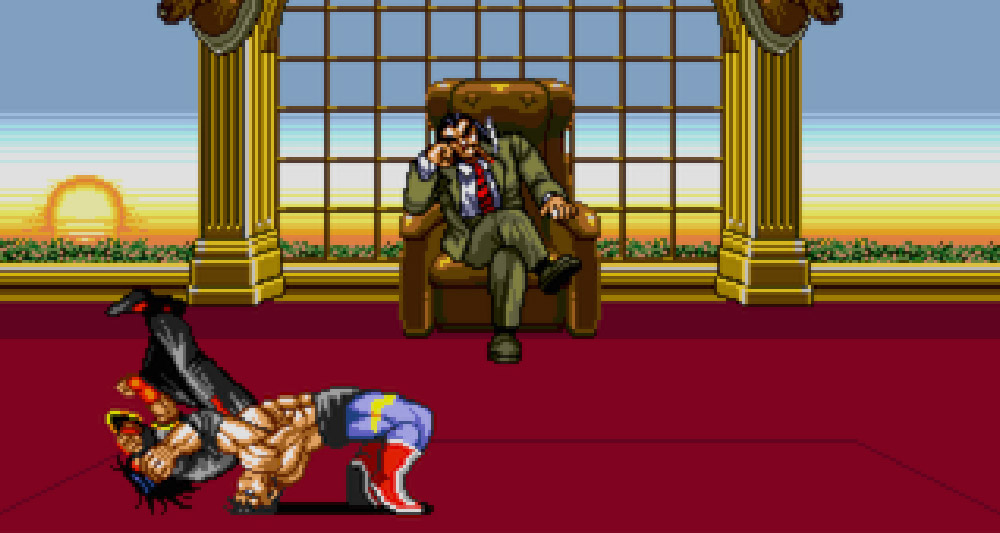 That’s where SCD’s Streets of Rage 2 Restoration hack comes into play. Much of the hack involves restoring cut content for the purpose of fleshing out the game in the way it was originally intended. Scrapped musical numbers like “Little Money Avenue” now play in-game, while graphical sprites have been restored to their Japanese counterparts. Other features include fixes to previous translation errors, some text fixes, and Mr. X smoking a cigar. 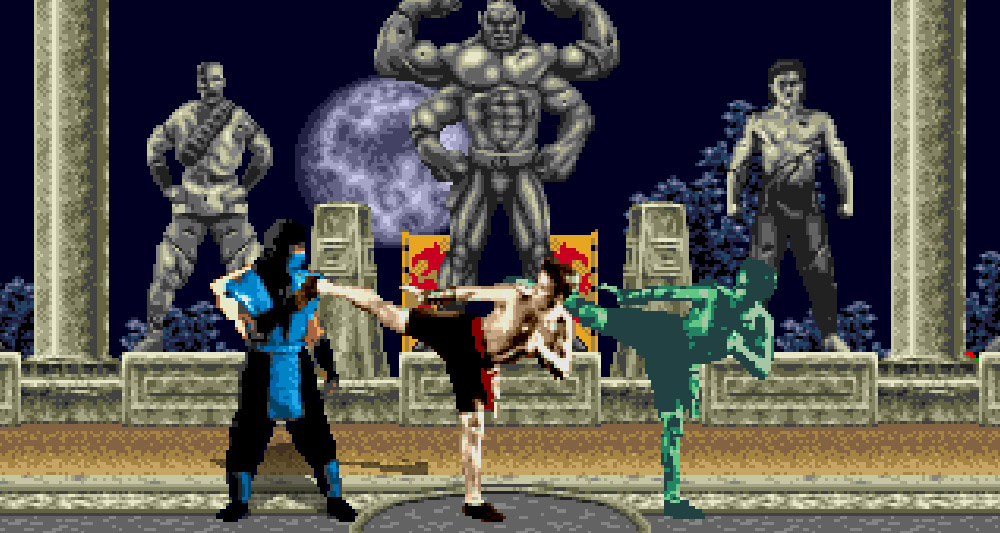 When Mortal Kombat touched down on home consoles in the first half of the 1990s, it ignited a powder keg comprised of parental groups, censorship watchdogs, and blowhard politicians like Joe Lieberman talking out of their hind quarters. The ultra-violent game was toned down significantly for the SNES version, which allowed Sega to steal Nintendo’s thunder by hosting its version with all the blood and gore intact. 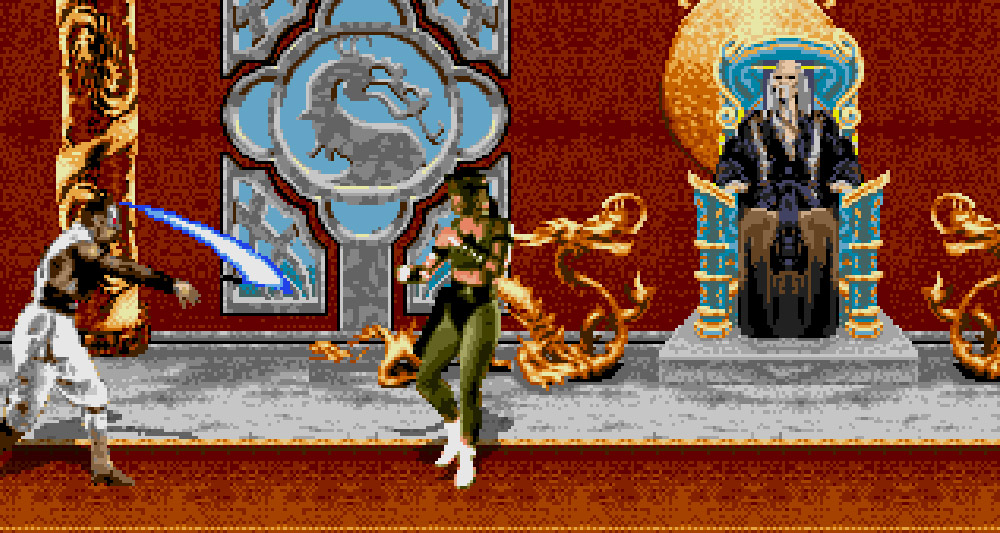 Unfortunately, the Genesis’ inferior hardware meant it couldn’t compete on the same level as the SNES, which offered a more “arcade-perfect” feel, sans the blood and gory fatalities. However, Linkuei’s amazing Mortal Kombat Arcade Edition hack managed to turn that notion upside down, making it hands-down the best Sega Genesis rom hack around.

The largest changes reside in the visuals, which have been painstakingly altered in order to better reflect the arcade version. This in itself is a major win, but it doesn’t stop there. An SRAM system has been added to save the Winning Streak list, character bios and ending screens have been reworked, and game mechanics – particularly related to timing – have been optimized. 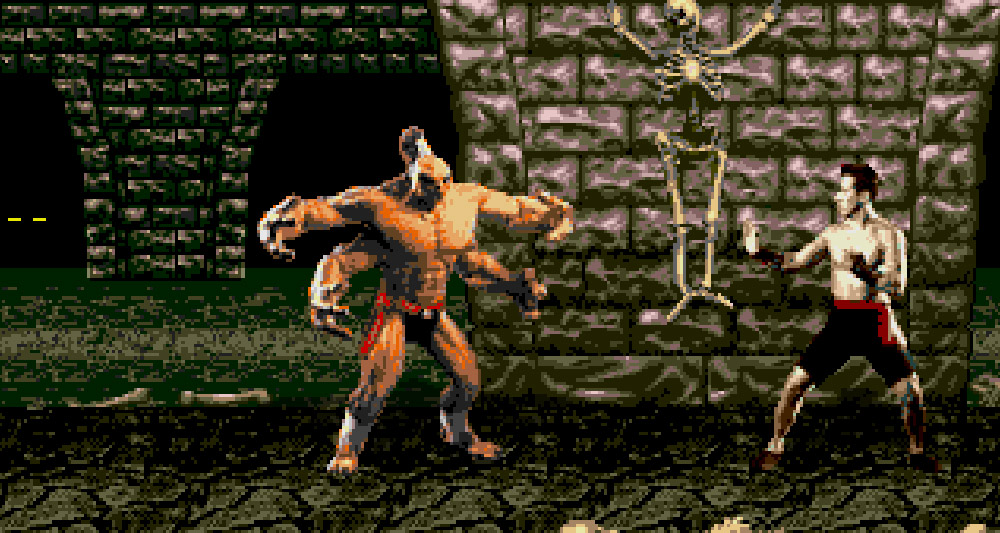 And finally, to top it all off, the author managed to squeeze in over 80 sound samples direct from the arcade version, which significantly changes the audio factor. The quality of the samples are a massive step up from the original Genesis release of Mortal Kombat. Nothing can compare to hearing the announcer shout “Fight!” and have it resonate just like the arcade game. This is definitely a labor of love that should not go unnoticed, even for those who prefer nothing but the arcade version.