Here’s how to find all the Ominous Stakes in Pokémon Scarlet & Violet, and capture the Treasures of Ruin Legendary Pokémon. 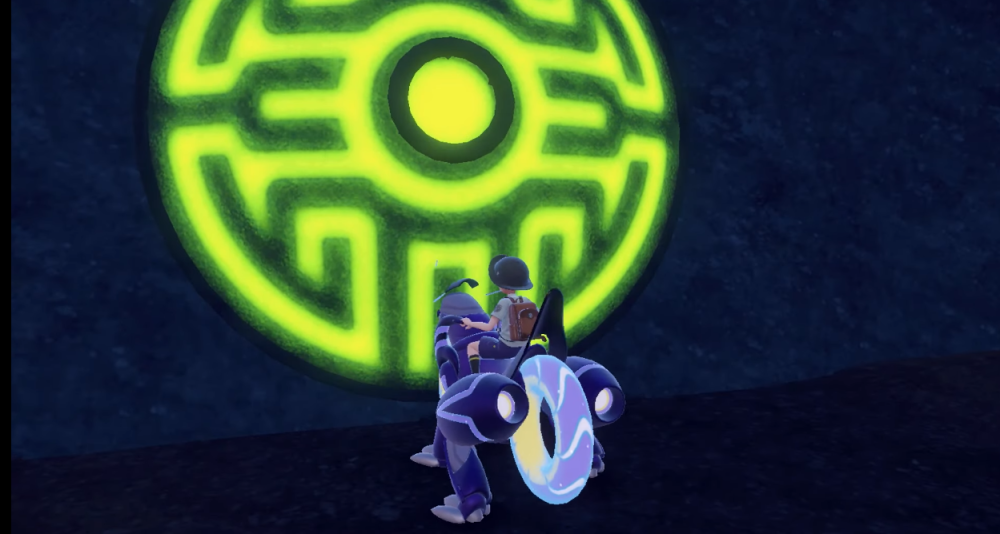 The player stands before the Groundblight Shrine, riding a Miraidon via Pokémon Scarlet & Violet (2022), Nintendo

RELATED: How To Evolve Charcadet Into Armarouge And Ceruledge In ‘Pokémon Scarlet & Violet’

The lore of the Paldea region states four ancient treasures were corrupted by an ancient king’s tyrannical reign. They turned into Pokémon, and unleashed disasters that destroyed his kingdom. The beasts were finally sealed away, and now you’re going to bust them out.

Around the area where each of the four Pokémon are sealed, there are eight stakes embedded in the ground. Each one is color-coded to their respective sealed shrine, glowing green, orange, purple, and blue. All players need to do is walk up to them, interact with them to pull them out of the ground, then go to where the Pokémon is sealed. 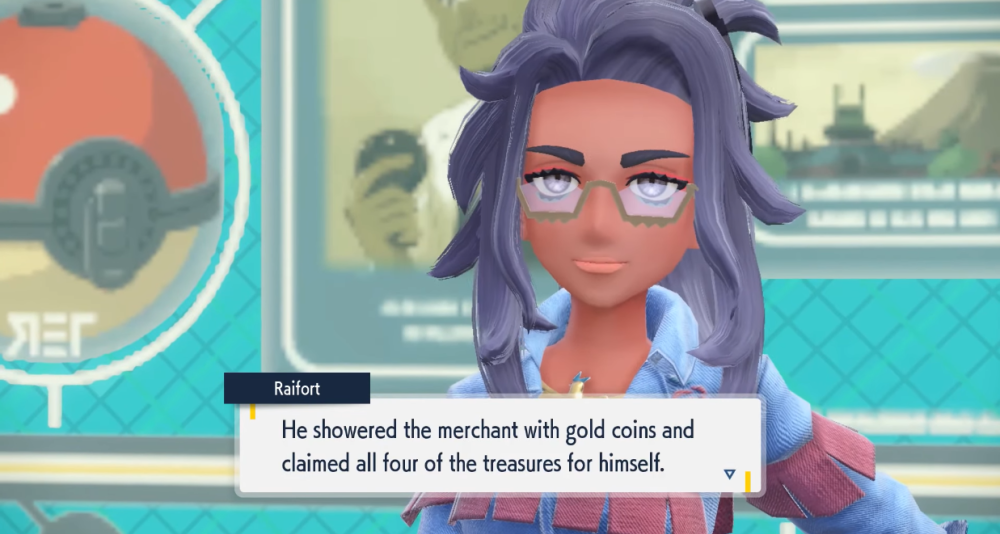 Teacher Raifort explains this if you’ve done your history tests, and will mark the shrines’ locations on your map. Keep in mind you may need to make sure Koraidon or Miraidon have certain abilities unlocked so you can climb, swim, and glide to the locations. Each of them are also level 60, so waiting until later in your adventure may make your life easier. 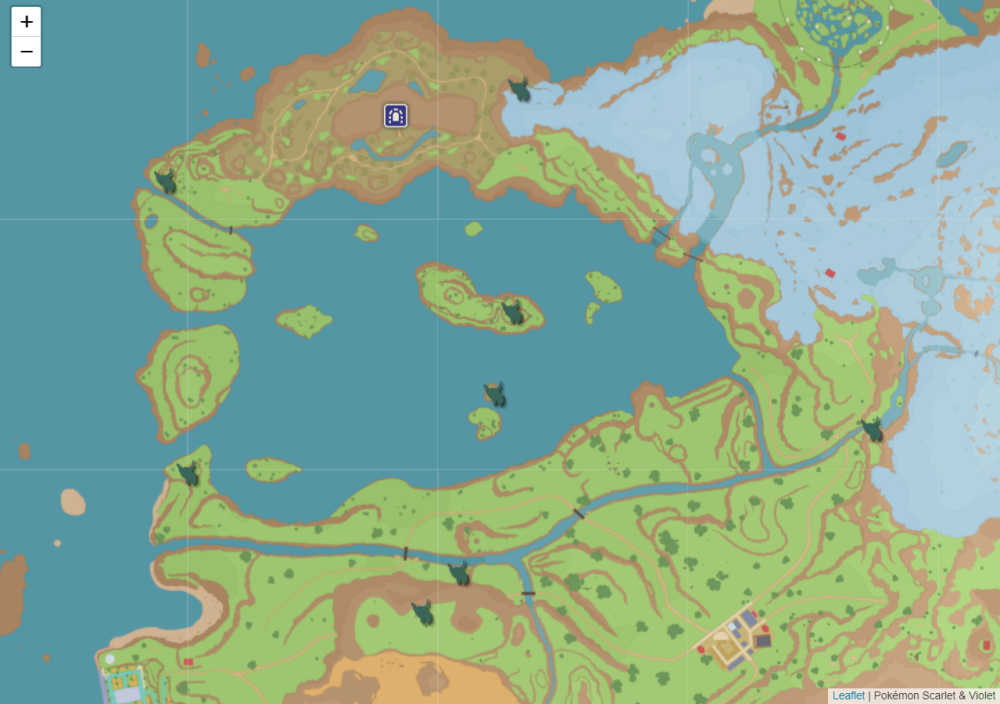 • East of Groundblight Shrine, northeast of a cave entrance. Climb the snowy part of the mountain that looks like a kidney on the minimap, and you’ll find the stake on the middle “nub” right on the edge of the cliff.

• Southwest of Gracia Stones, northwest of Casseroya Lake (Islet). You’ll find a short mountain west of some ruins. The stake is on the west-most thin C-shaped ridge.

• East of Casseroya Lake (Islet). On the Islet itself, head to the raised area to the east, and the stake will be out in the open.

• South of Casseroya Lake (Islet). Head to the small island (the smaller of the two directly south) and look for the lower section to the southwest.

• Northeast of Medali, south of Glaseado’s Grasp. Follow the river that runs through West Province Area Three up to the snowy mountain, and you’ll find a waterfall. At the top, look at the C shaped clifftop to the south. The stake will be by a rock.

• North of Porto Marinda. Cross the river, and go as far north as you can without leaving the mainland. Just north of the beach will be a mountain, and the stake will be there with two trees at its highest point.

• South of Casseroya Watchtower No. 1. Cross the river, and you’ll find it next to the waterfall. 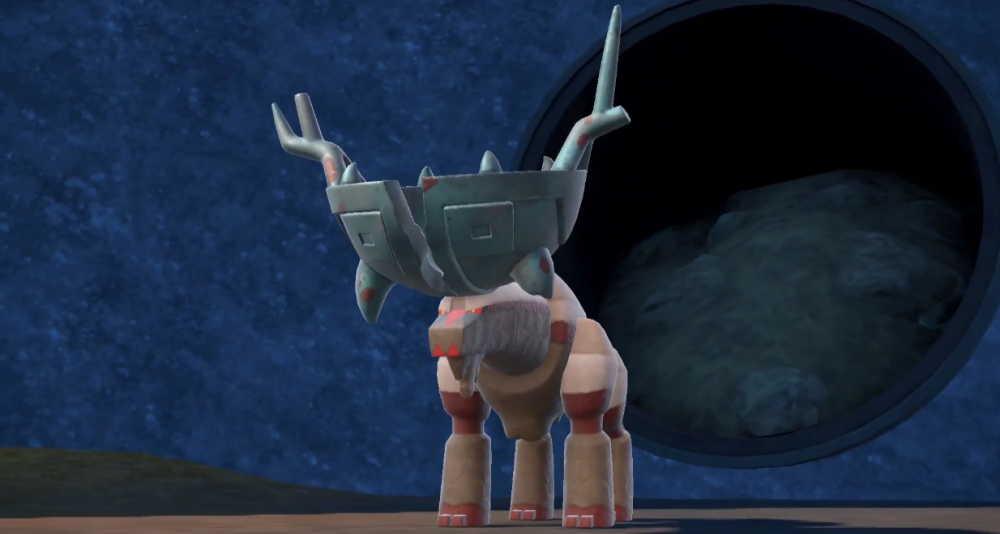 RELATED: How To Evolve Pawmi Into Pawmo And Pawmot In ‘Pokémon Scarlet & Violet’

The Pokémon’s lair is located in the Groundblight Shrine, and contains Ting-Lu. It’s a Dark and Ground Type that has a lot of HP, Attack, and Defense. 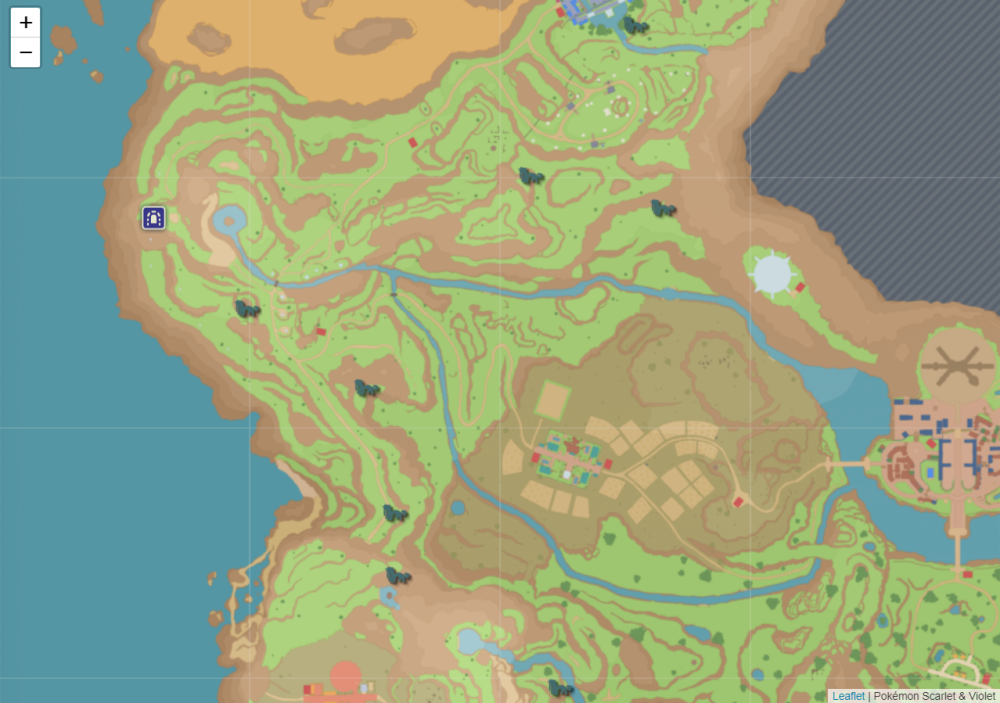 • South of Cascaraffa. Look for the southern entrance, and you’ll find the back side of the Gym. The small lake behind it has a river flowing out of it, with two large trees either side. The stake is beneath the east-most tree next to the river.

• East of West Province Area One (North)’s Pokémon Center. Head to the watchtower, then head southwest. The stake is on a small cliff with a single tree, you should be able to look out over the watchtower, and a slightly larger flat patch of cliff should be behind you.

• Southeast of West Province Area One (North)’s Pokémon Center and the nearby watchtower, northwest of the Pokémon League, and north of the Grand Olive Orchard. It’s almost directly east of the prior stake, tucked into the small crevice between mountains flanking the “zig-zag” path north of the river.

• West of West Province Area One Central’s Pokémon Center and the three windmills, southeast of the picnic area. West of the windmills will be a round mountain surrounded by a ring of grass. In actuality, this ring is sunken deep down, while the “mountain” is at ground level. The stake is in the middle of the mountain.

• Southeast of Province Area One’s Pokémon Center. You’ll see a somewhat heart-shaped mountain with three patches of grass. The stake will be on the eastern one of the three.

• Southwest of Cortondo. Find the the perfectly circular small lake, then go southwest until you find a cave entrance. In that cave- which should be a straight corridor- you’ll find the stake. On the minimap, it will look like it’s right next to the footpath.

• North of the Leaking Tower of Paldea. This is also north of Alfornada. On the “zig-zag” path to the northwest, you should see a single spit of land directly north of the Tower. It will be obscured by the cliff (and lower down), but the stake should stand out as there is nothing else on it.

• East of Alfornada, southwest of South Province Area Two’s Pokémon Center, west of the unnamed watchtower. There are several large waterfalls falling from Alfornada. The top first waterfall past the cliff “wall” has the stake on the small piece of land to the east. 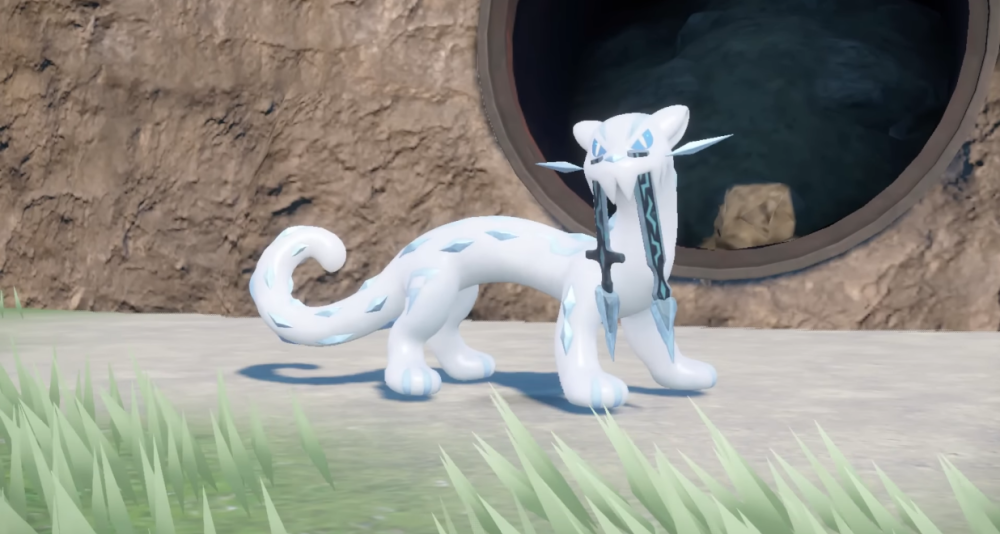 The Pokémon’s lair is located in the Icerend Shrine, and contains Chien-Pao. It’s a Dark and Ice Type that has high Speed and Attack, though its Special Attack isn’t too bad either. Its Sword of Ruin lowers the Defense stat of all other Pokémon in battle. 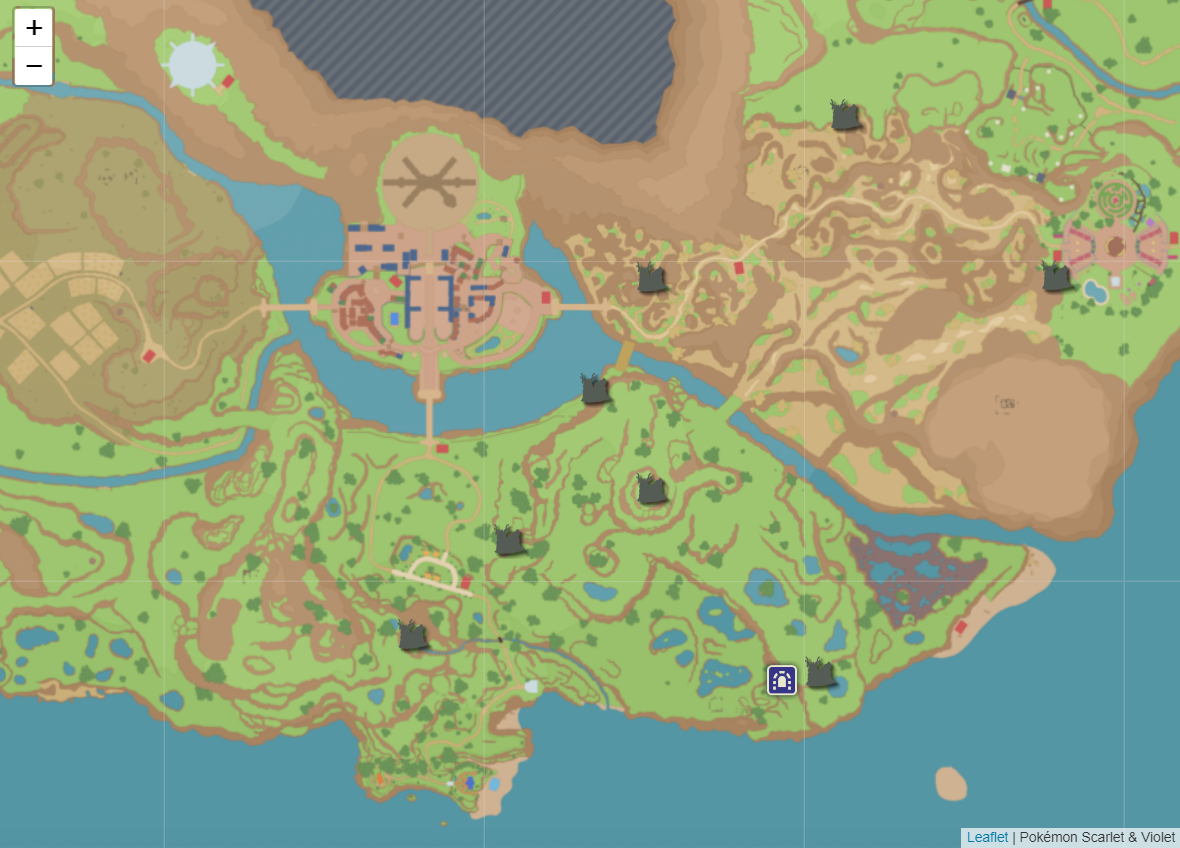 • Northwest of South Province Area Three Watchtower and Artazon, southwest of East Province Area Two’s Pokémon Center. On the north of the cliff area, you should see a “U” shaped dip in the rocks on your mini-map. The stake is just to the west of that, in the smaller “w” shaped border. You’ll find it on the grass next to the deep chasms below.

• South of Artazon West’s entrance. The stake is atop the cliff to the south, overlooking the Pokémon Center.

• East of Mesagoza, west of South Province Area Three’s Pokémon Center. This is also north of a Backpacker trainer, and southeast of a Student. You should see a cluster of light-brown shapes on the minimap representing cliff tops. The stake is on the top right one, sitting on its south edge.

• Southeast of Mesagoza East. Cross the archway over the river to the southeast like it was a bridge, and you’ll find the stake on the land on the south-side cliff.

• Southeast of Mesagoza South, northeast of Los Platos. You’ll see a mountain in South Province Area One that spirals upwards. The stake is on top of it.

• Southwest of Los Platos. On your minimap you’ll see a small lake that leads into a river. This is a waterfall, and you’ll find the stake in the almost complete ring of grass around the lake.

• Northeast of the Grasswither Shrine- or rather, right above the shrine itself. 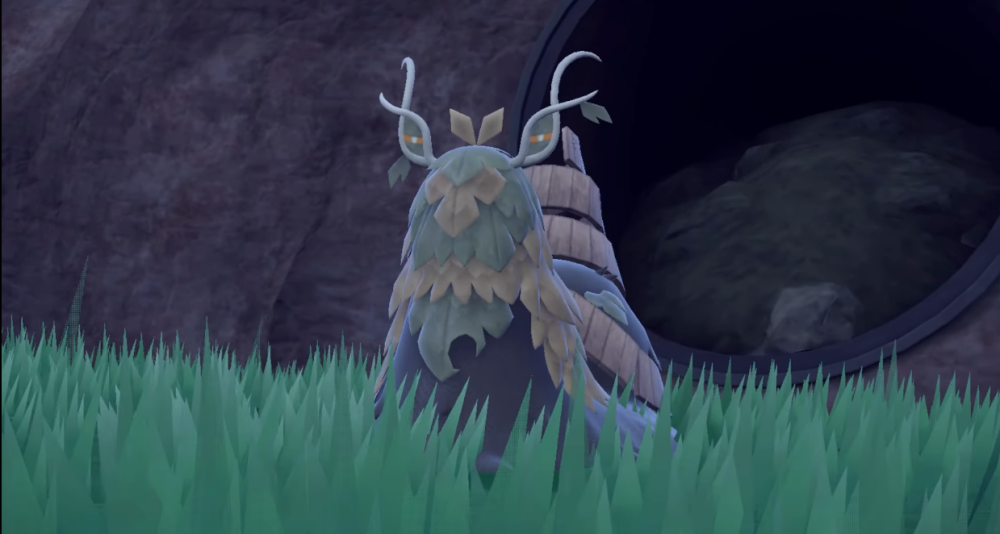 The Pokémon’s lair is located at the Grasswither Shrine, and contains Wo-Chien. It’s a Dark and Grass Type with a lot of Special Defense, and almost as good Defense to boot. Its Tablets of Ruin ability lowers the Attack of all other Pokémon. 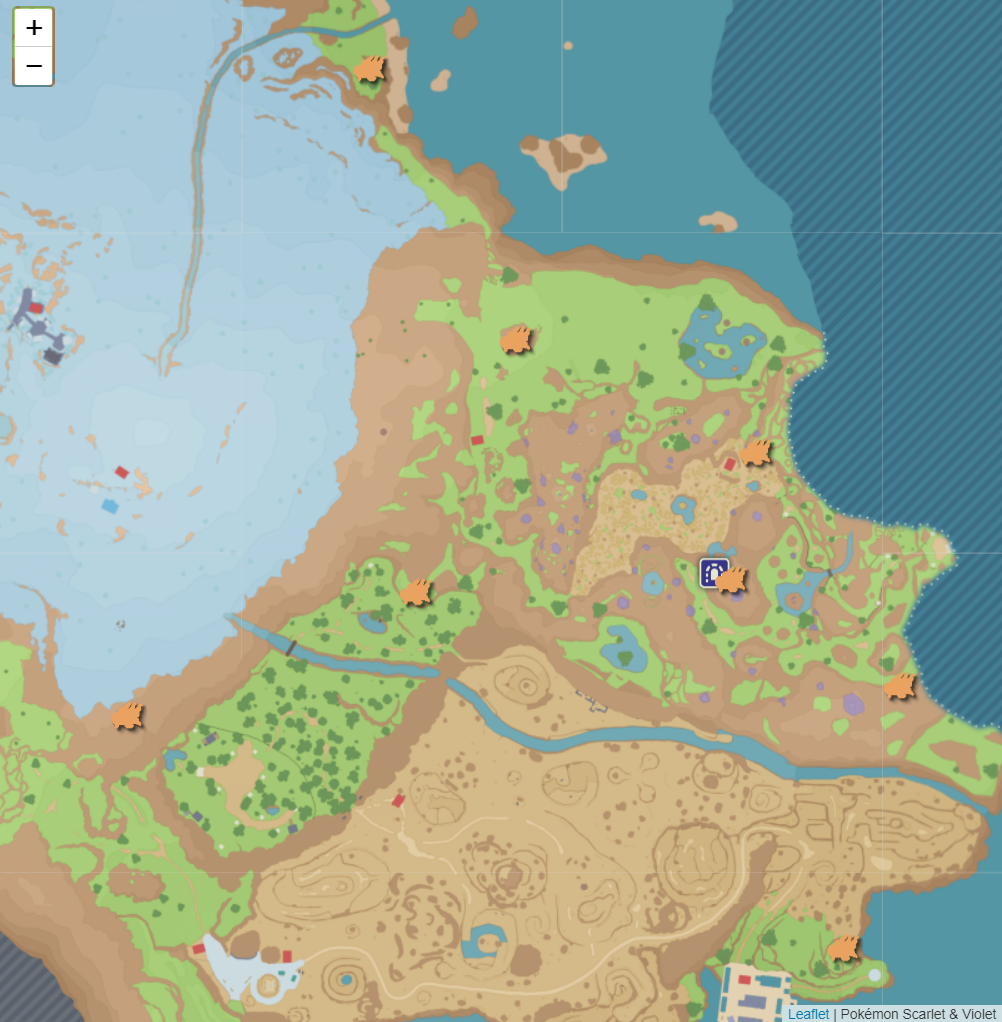 • Northeast of Glaseado Mountain, south of the river’s mouth, near the tree on the cliff. You’ll find it beside some rocks.

• Northeast of North Province Area Two’s Pokémon Center. Also north of Team Star’s Caph Squad’s Base (where you can battle Fighting Crew Boss Eri). Climb the cliff that almost looks out over the Pokémon Center, and you’ll find it next to the tree.

• North of the river running through Tagtree Thicket, and northeast of the small lake in that area. You’ll find it next to the tree just at the “entrance” of the thin path between the mountains.

• South of North Province Area Two’s Pokémon Center. Find the Firescourge Shrine (at the top of the waterfall and river that looks like a circle with three arms on the mini-map), and climb up the mountain to find it.

• South of North Province Area Two’s Pokémon Center, and southeast of the Firescourge Shrine. Follow the path until you find a round mountain with a single tree, a much larger mountain to the right, and a sheer mountain in front of you that you can’t climb (the striped area on the map). You should find some ruins, and the stake will be within them.

• Northeast of the Dalizapa Passage Pokémon Center, and north of the southern Dalizapa Passage entrance. There’s a single grass patch on the mountain just before the rock gives way to snow. You’ll find the stake between the two trees.

• Northeast of Levincia. Look for the cliff that overlooks the Levencia Lighthouse, and you’ll find it beneath a single tree. 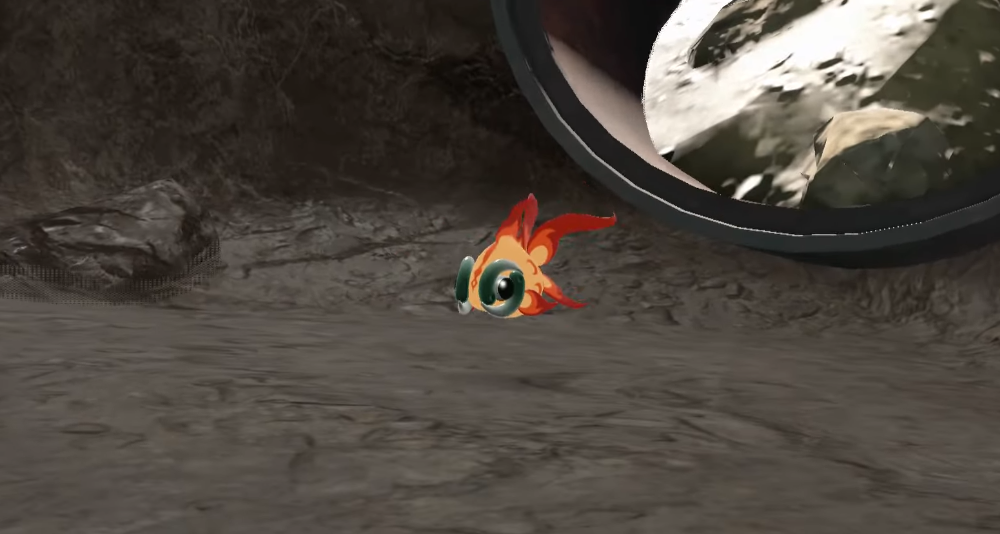 The Pokémon’s lair is located in the Firescourge Shrine, and contains Chi-Yu. It’s a Dark and Fire Type with high Special Attack, followed by Special Defense and Speed. Its Beads of Ruin will lower the Speed stat of all other Pokémon.

That’s all of them! For those shiny hunting, keep in mind that these Pokémon cannot be shiny, so no need to soft-reset. We’re sure these legendary Pokémon are something you’ll treasure.