Over the last several years, various comic cons have attacked anti-SJW creators, publicly humiliating such creators by banning them from their conventions. Big names like Mike S. Miller (Injustice, Shadow of the Conqueror), John Ringo (Black Tide Rising), and Larry Correia (Monster Hunter Intl.) have all been victims of conventions bowing to wokeism. The high-profile nature of these creators usually sparks outrage in social justice warriors, who then complain about them. But this time, Big Country Comic Expo has attacked a volunteer with no public profile merely because of who he associates with on Twitter.

Craig White, known online as “Mad Ruth,” is a 26-year military veteran who’s now retired. He’s a comic enthusiast known online for his love of independent comics, including those that work under the label ComicsGate, a movement dedicated toward escapism, providing a fun contrast to the mainstream comic industry with non-woke entertainment.

This year, he launched his new military science fiction comic, SOLTAC, on IndieGoGo. 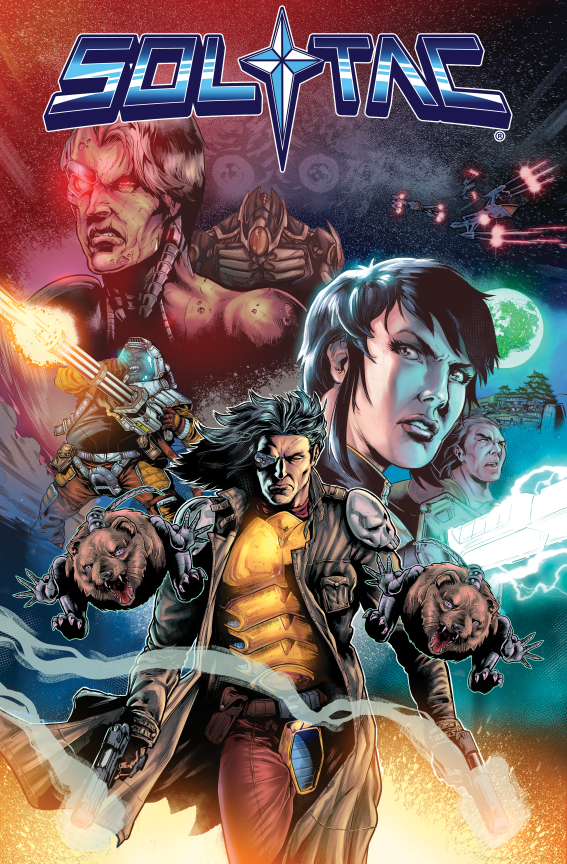 To his surprise, after attending and working the Big Country Comic Expo at this year’s show, the convention organizers made an announcement banning and disavowing him. The statement they made was as follows:

“It was brought to our attention that one of the volunteers at Big Country Comics Expo 2022 is associated with a movement that does not align with our values in the comics community.”

Big Country Comics Expo continued, “Big Country Comics & Allied Legends Inc. values inclusivity, diversity, and community. We encourage everyone to celebrate their differences & beliefs. All people should have strong representation within the art community and feel welcomed and supported. This individual’s association with a group known to be against our core values came as a shock to our team. To anyone who was bothered by this association, we provide our most sincere apologies.” 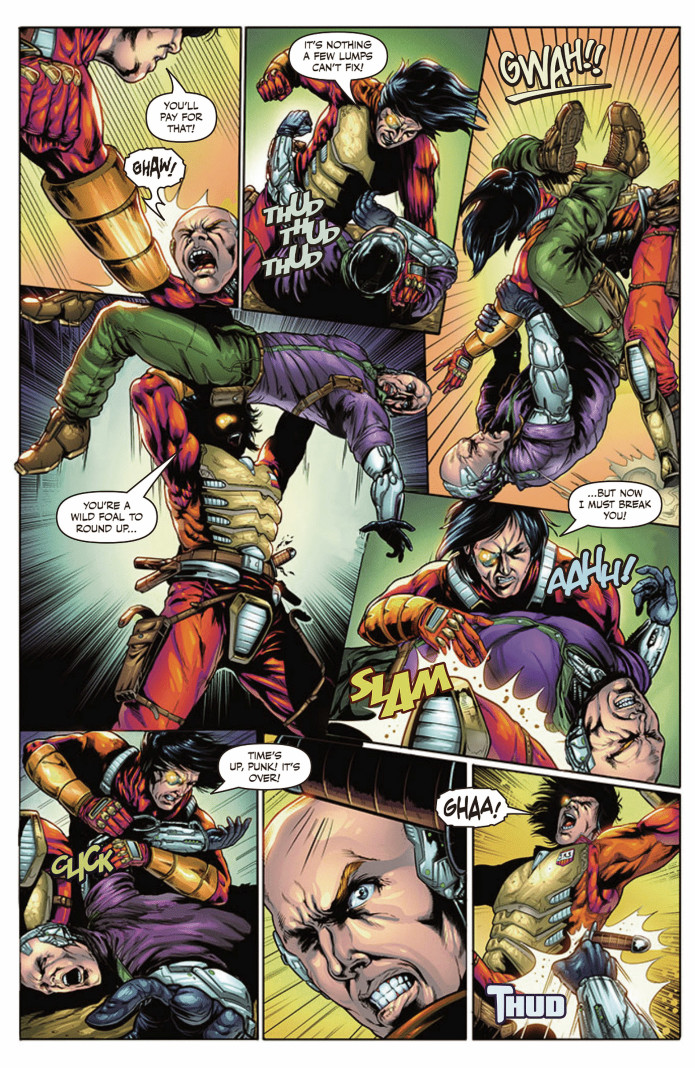 “We continue to see this volunteer and comic creator publicly voice his dissatisfaction on social media against one of our top supporters, not only to the Big Country Comic Expo, but also a very respected member to the entire comics community. For this, we ask you to stop,” they wrote.

“This association was not brought to our attention until after our show had finished. We will be implementing further protocols for future events to ensure this does not happen again,” Big Country Comics Expo declared.

“If any of our guests, vendors, or customers ever feel unwelcome or have a concern, they should be brought to our attention, we encourage you to discuss the matter directly with any member of our director team,” they concluded. 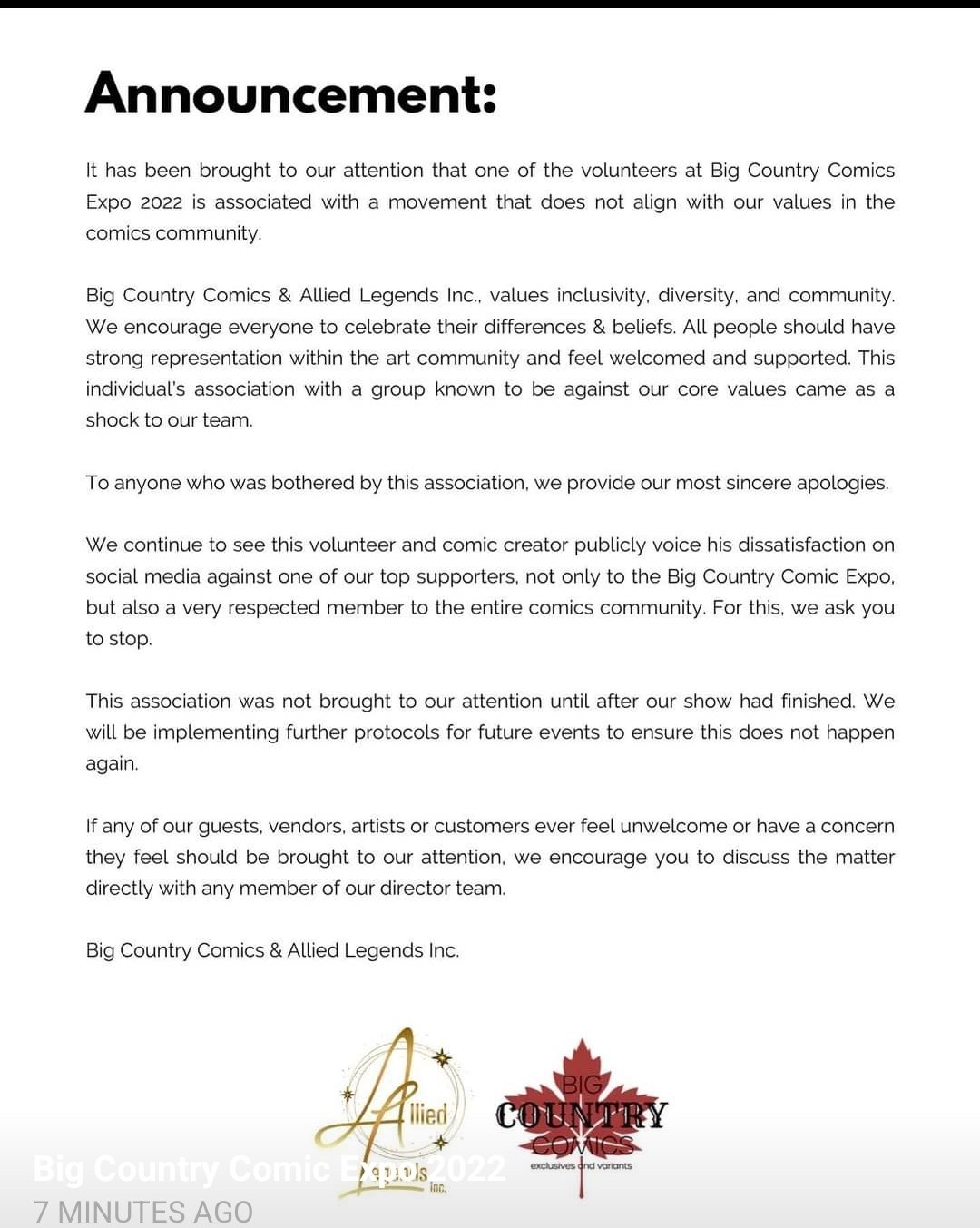 Mad Ruth’s account of events differs from the statement by the convention. He says it’s notable that it was “brought to their attention” after the convention ended, as no one bothered him up until the last two hours of the show, when he was approached by a man who goes by Calum online.

“I just finished a two day comic con and it was awesome until some a**hat came up and asked if I was Mad Ruth? I said yes. Then they asked if I heard of Watergate? And I asked from the 60’s? They then snickered at me ‘you know what I mean’ and walked away… Whatever,” Mad Ruth tweeted. 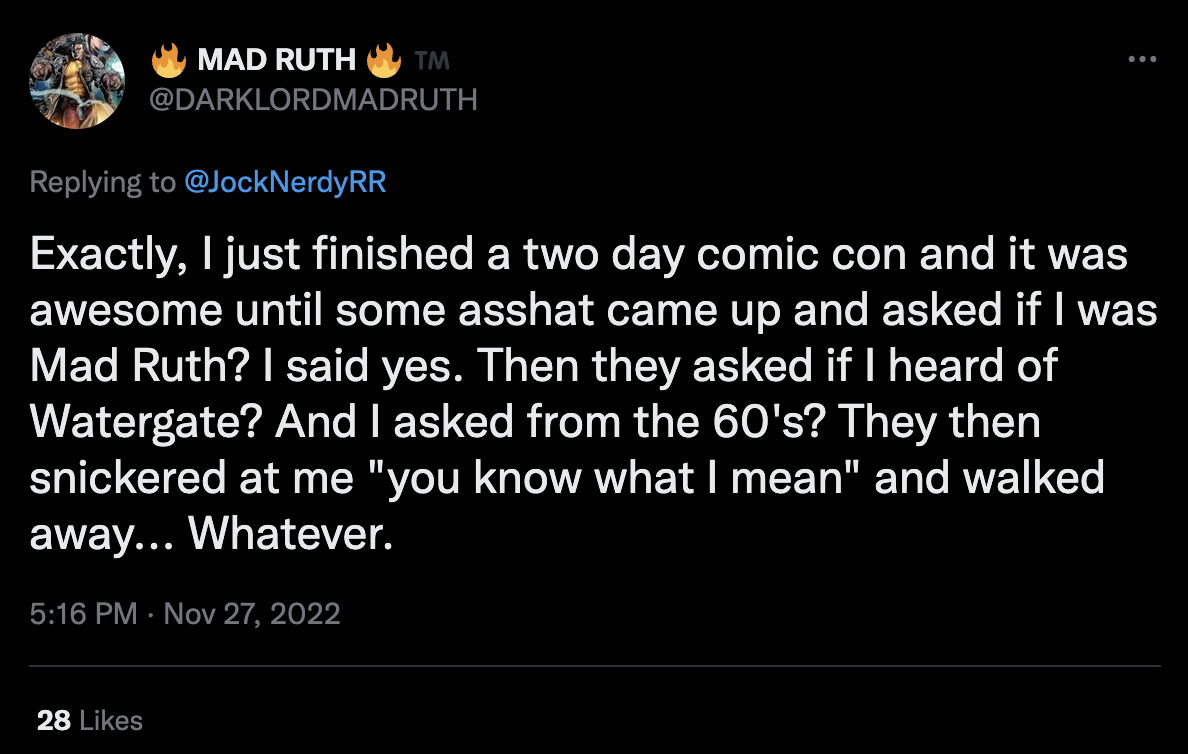 No one at the convention other than this Calum had any idea about his online associations nor was he hostile toward anyone at the convention. According to Mad Ruth, he wanted to network with people interested in comics to help promote and sell his SOLTAC book to a local crowd. 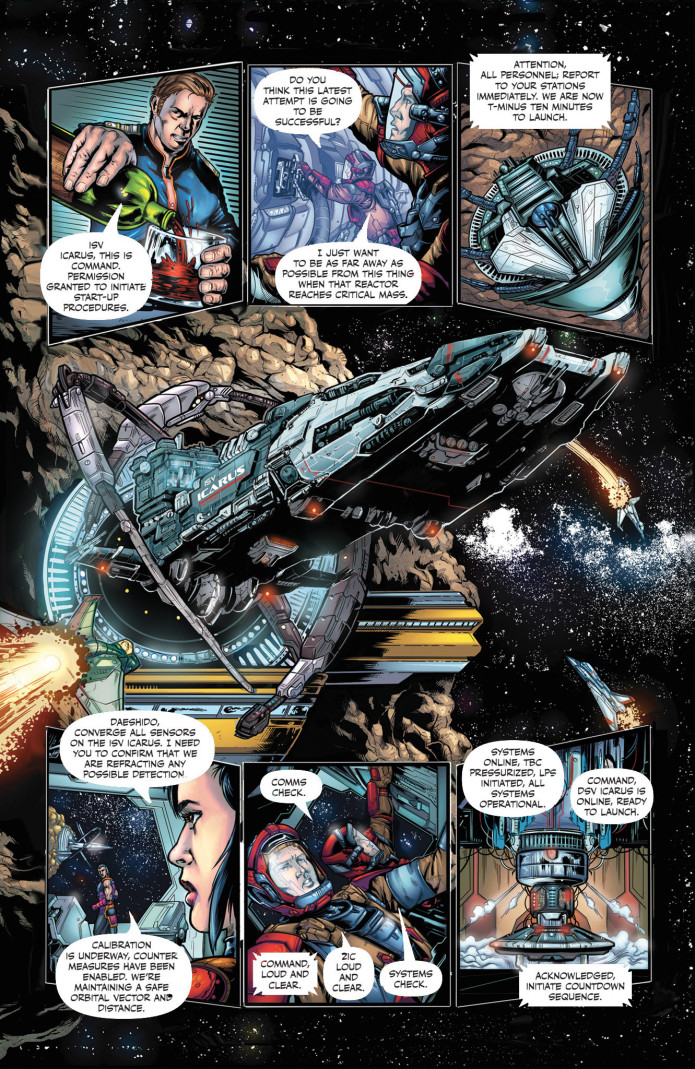 While the Big Country Comics Expo says they celebrate differences and beliefs, their actions prove otherwise, as they are targeting someone based solely on who he interacts with on Twitter and not because of any negative actions of his own.

Mad Ruth says of himself, “If it needs to be said I’ll say it once again for those who need to hear it. I do not discriminate or judge anyone based on race, color, creed, gender, political or sexual orientation. I treat everyone equally as I wish to be treated, all are welcome! Can you say the same?” 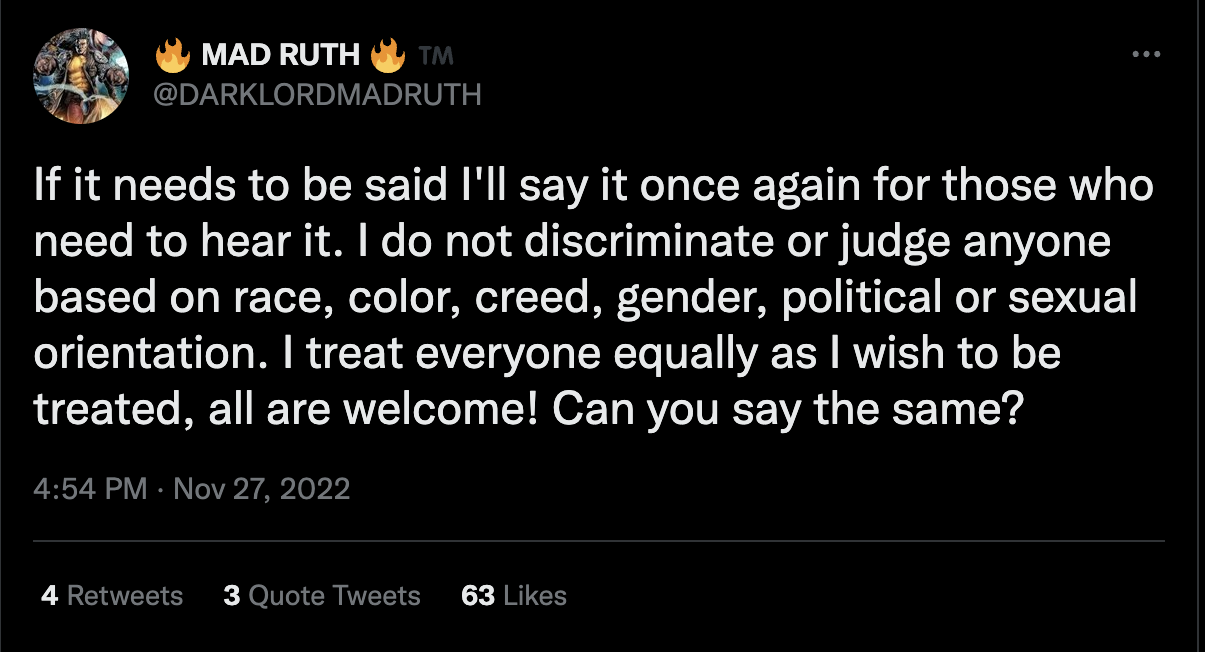 Cyberfrog creator Ethan Van Sciver stated of the banning, “This is astonishing, but a good reminder. The comic book industry is very, very sick. When this convention discovered that one of their volunteers was aligned with ComicsGate, they felt the needed to release a statement unpersoning him viciously. These people have no morals.”

The woke cultural gatekeepers can never say the same, as they spend their days policing who associations with whom and what they perceive people to believe online. They never intend “diversity and inclusivity” but only want people who think the same as them to be allowed into a hobby or community.

That such blatant discrimination exists to the point where conventions pick on volunteers is a tragedy to culture. 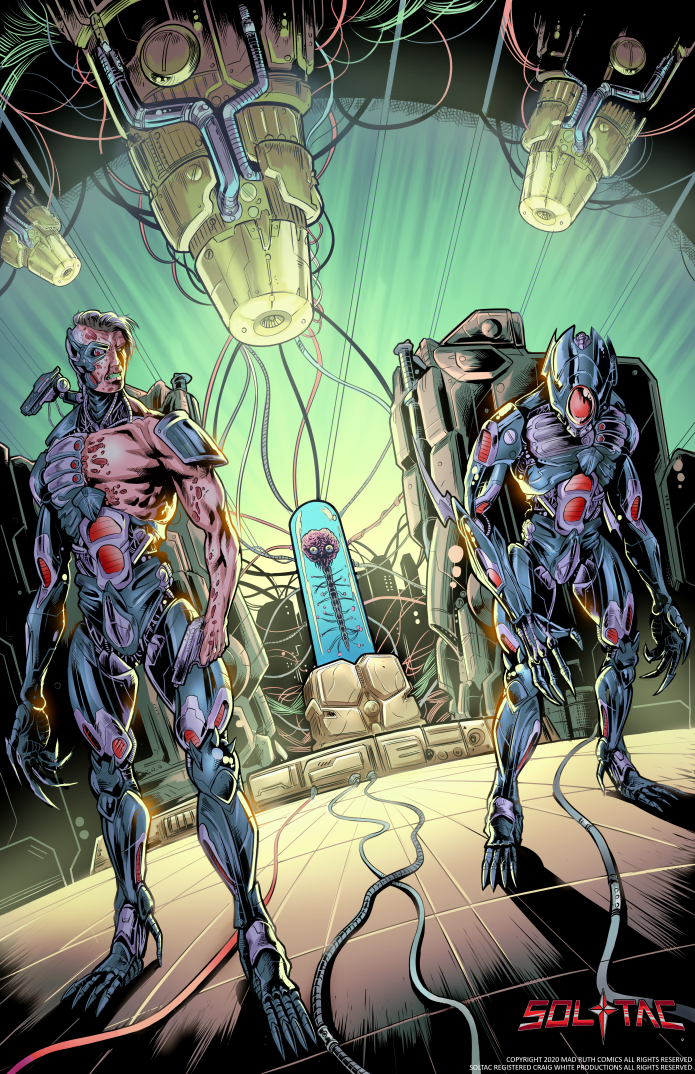 What do you think of Mad Ruth’s convention banning? Leave a comment below and let us know.