Crunchyroll’s habit of licensing censored versions of anime has been under massive fire ever since their purchase by the pro-censorship Sony, but a recent edit by the streaming platform to the English subtitles for ONIMAI: I’m Now Your Sister! made has audiences more concerned than ever before. 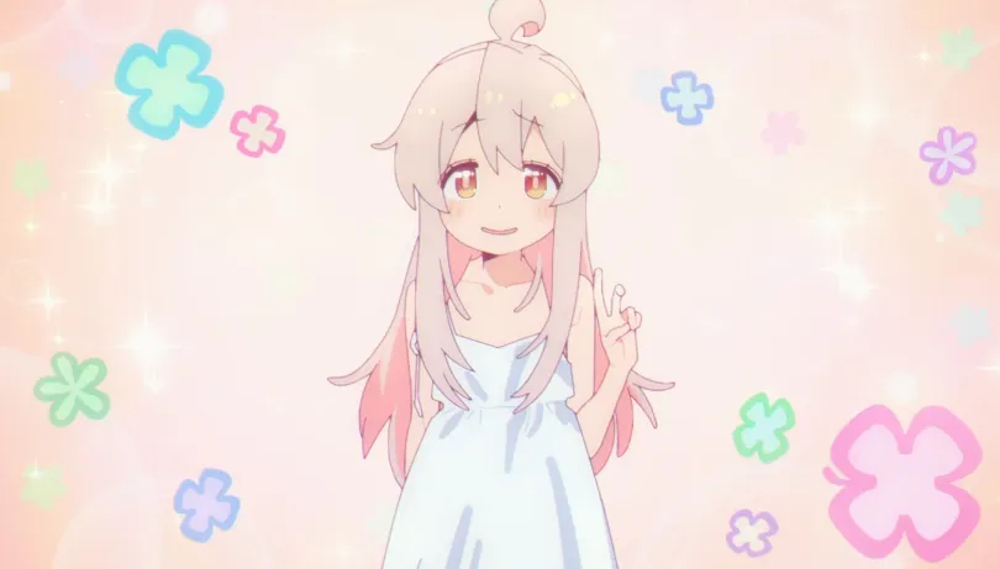 An adaptation of mangaka Nekotofu’s original work, ONIMAI: I’m Now Your Sister! follows the story of Mahiro Oyama, an anime-loving shut-in who, after being subjected to one of his scientifically inclined sisters’ experiments’, wakes up to discover that he has been transformed into a middle-school aged girl. 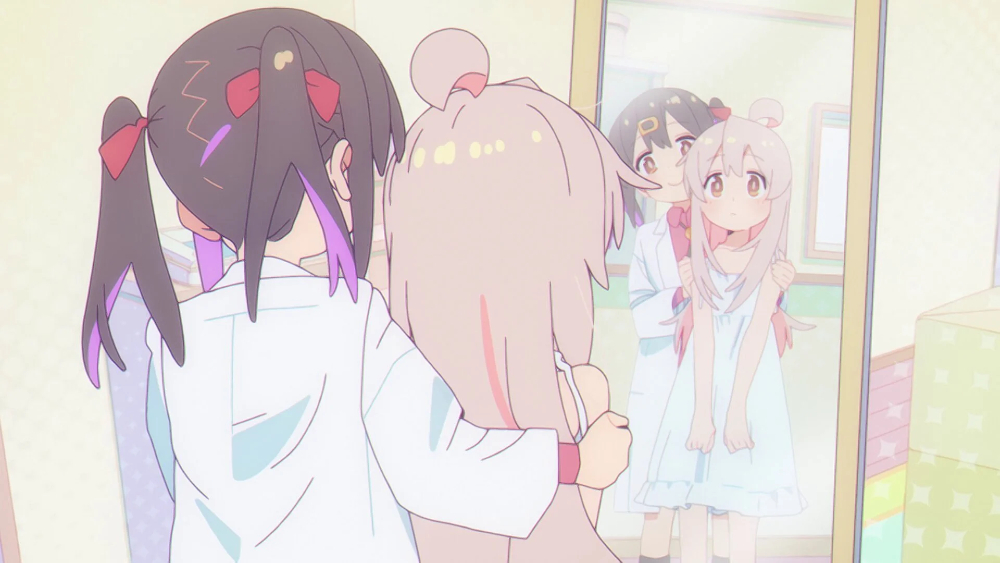 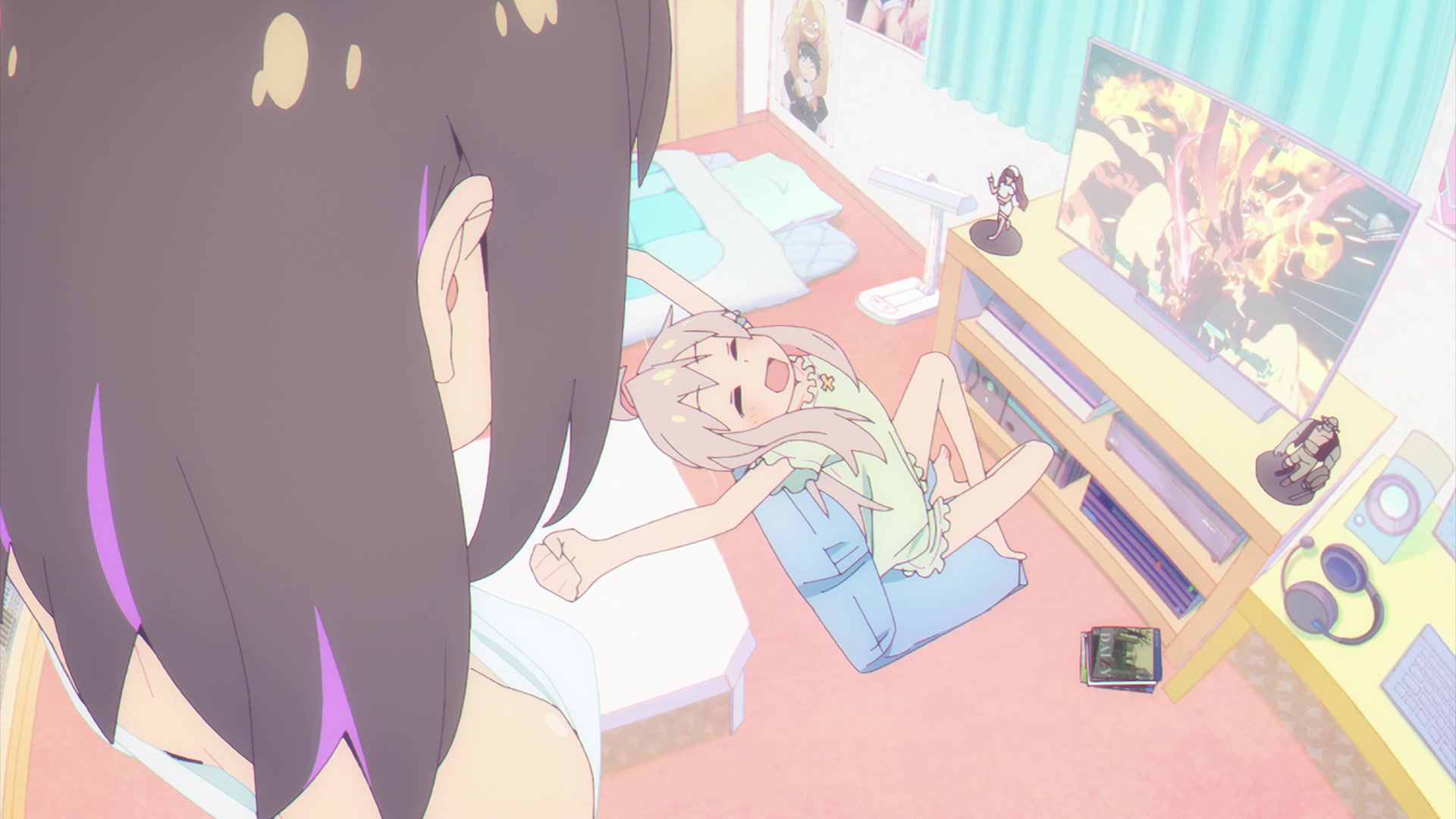 Mahiro takes a quick break from flexing his skills in ONIMAI: I’m Now Your Sister Episode 2 “Mahiro’s Time of the Month” (2023), Studio Bind via Crunchyroll

Upon its January 25th premiere on Crunchyroll, it was soon discovered that the streaming platform had bizarrely attempted to erase gendered language from ONIMAI’s English subtitles. 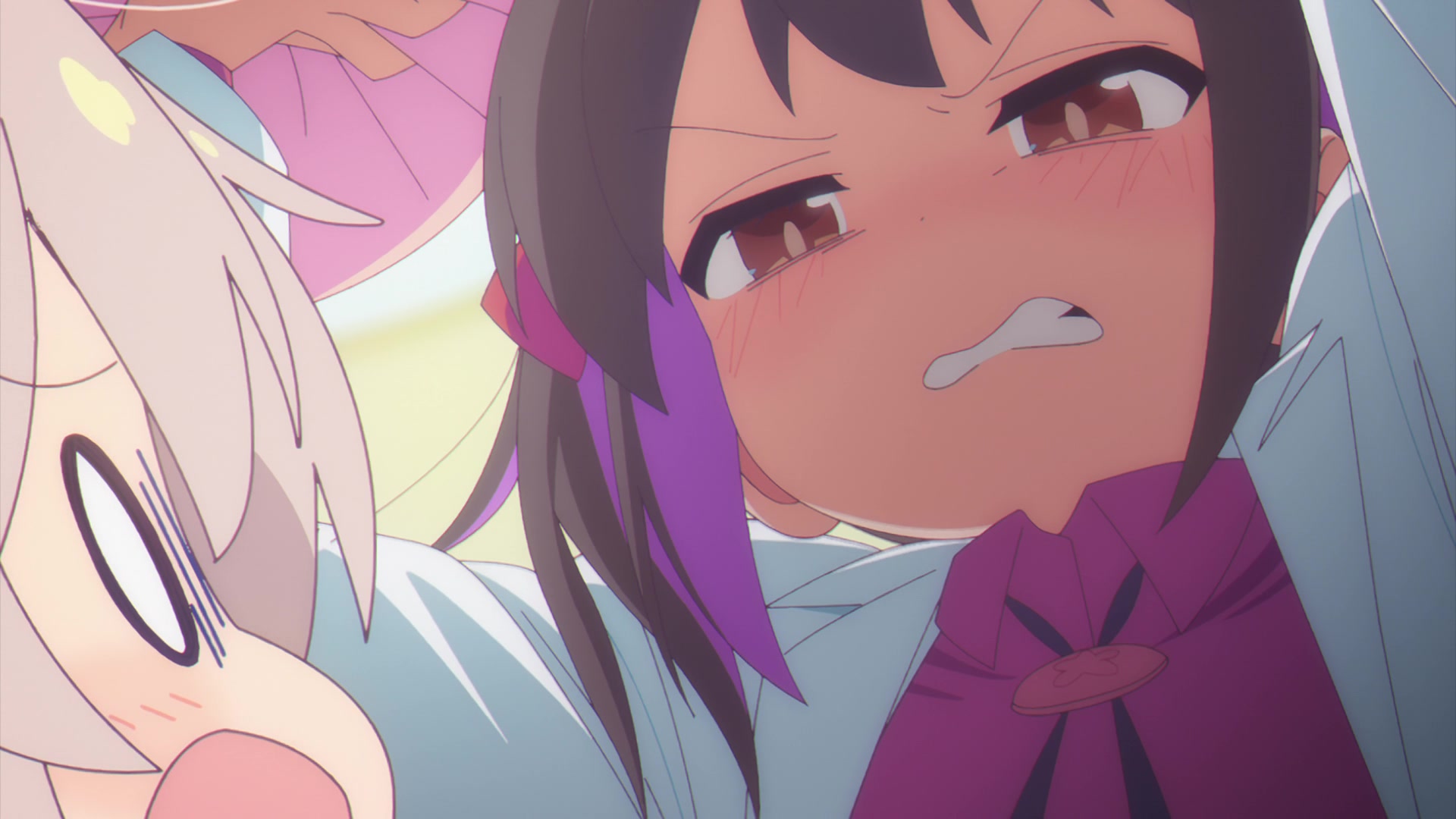 This change, as shared by Twitter user @iuntue, was made to a scene in the series’ second episode, Mahiro’s Time of the Month, wherein Mahira notices that her now-sister is slowly beginning to adapt to her new situation.

“Girl’s sitting posture,” Mahira observes in the original Japanese, as per a fan translation. “You’ve becoming more and more girly.”

However, in Crunchyroll’s version of the episode, Mahira instead asserts, “You even sit differently,” before asking, “You’ve really gotten into the swing of things, huh?” 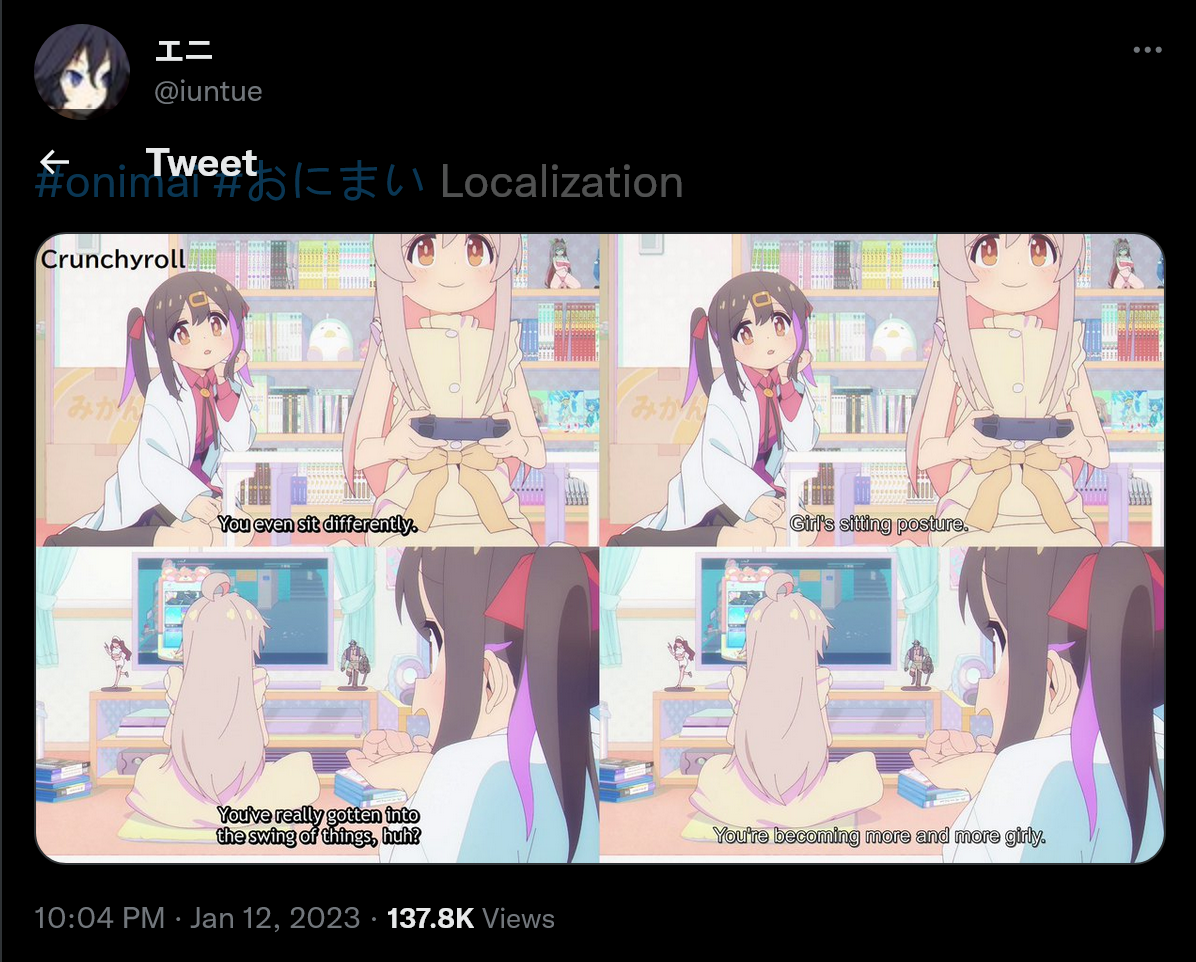 In response to @iuntue’s initial call out, @JonathanTFx1 confirmed that this gender neutral translation was seemingly exclusive to the English subtitled version of the episode.

RELATED: Crunchyroll Announces New Licenses For 2023 Including ‘Bofuri’ Season 2 And ‘The Legend of Heroes: Trails of Cold Steel – Northern War’

This change appears to have been the work of a translation team which included @tomoyo_0180, who on the day of Onimai‘s debut took to Twitter to brag that her assignment to the she was able to put their “gamer knowledge to good use” in butchering the series’ localization. 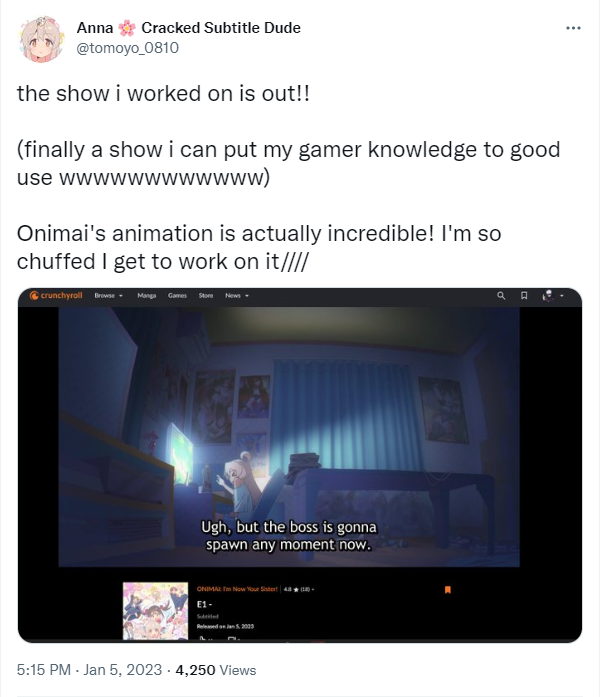 Providing insight into their approach towards Onimai, @tomoyo_0810 explained on January 7th that, in some instances, “deciding to avoid a one-to-one translation helped elevate my translations (whilst retaining the intended meaning).” 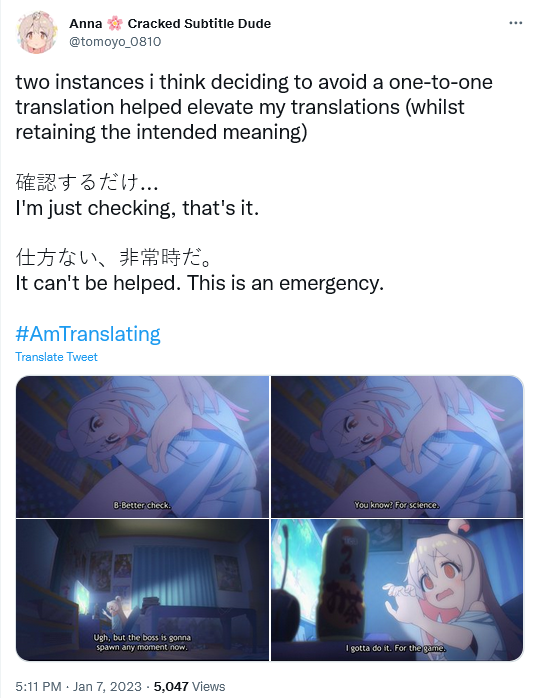 Inevitably the localizer’s intentional disregarding of Nekotofu’s original vision drew criticism from fans, particularly those who have grown tired of the West’s self-aggrandized attempts to ‘improve’ foreign works.

In turn, @tomoyo_0180 responded to massive backlash unleashed against her by both doubling down on her work and insulting those who disagreed with her.

“What did you do today kiddo?” the translator asked, imitating a conversation between two individuals. “Oh i was watching this anime and the translator didn’t translate a line the way i would have so i went to find them on twitter and left them a mean comment!! wooooow im so proud. of you!!!” 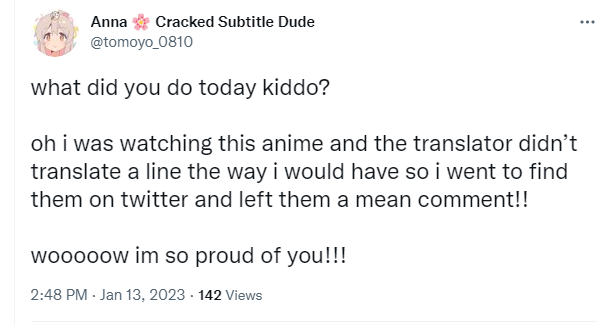 Adding even further fuel to fire, @tomoyo_0810 would later admit to being a “newbie translator”.

“Question: How do you tend to translate sounds of exertion like “よいしょっと” etc.?” @tomoyo_0810 inquired. “Newbie translator looking for more ideas to add to my arsenal…. (I tend to struggle with onomatopoeia since I’ve never been into English language comics–)” 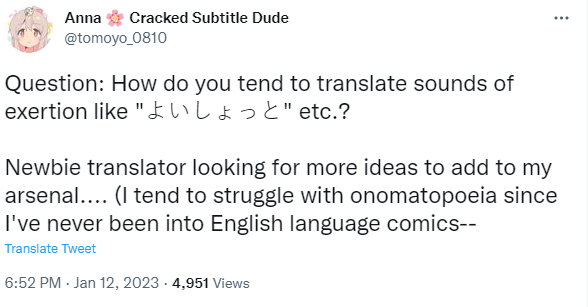 Ultimately, @tomoyo_0810 would declare that they were  “locking my account for a few days until the angry e-boys give up on harassing me.”

Following her eventual return to the public eye, @tomoyo_0180 would poke the bear one last time, admitting on January 17th that “the hilarious thing is even the so-called ‘one-to-one’ translations I gave as examples [as seen above] aren’t even one-to-one”