We got to speak to lots of people at the Baltimore Comic-Con and one of them was Andre Campbell, Baltimore native and President and CEO of Heritage Comics HSQ. We talked with Andre about his custom helmets and the latest comics he is working on.

BiC: Hey how’s it going. Can you tell us about who you are and what you have here at your booth?

Andre: My name is Andre Campbell, I’m President of Heritage Comics HSQ. I’ve been doing Baltimore Comic-Con. This is my 9th year. I publish my own comic books with my own characters and I make helmets and my own costumes. 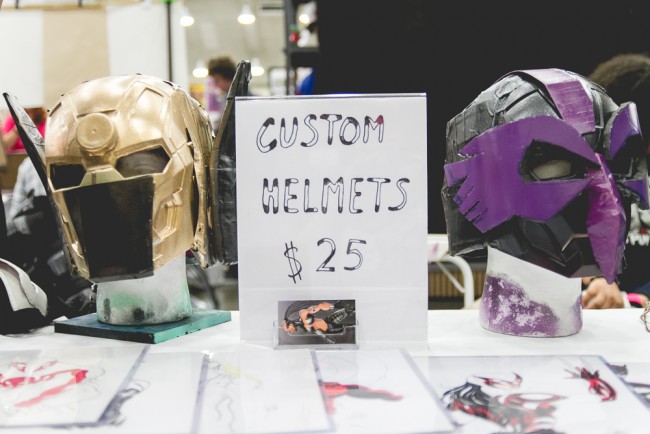 BiC: Can you tell us a little bit about your helmets?

Andre: I’ve actually sold four and you are missing out on some of the real, real nice ones. I had a helmet called Blood Tiger and the Reaper that goes with this costume. Originally I was doing the helmets just as a talking piece, a social piece. People come over and ask me questions and I tell them about Heritage. But people started liking them and people bought them and I was like really are you kidding me? I’m happy for it. The helmets are all made out recyclable stuff. I use cereal boxes, duck tape, masking tape, Iron Man masks, and foam, AV foam. I’ve been blessed.

BiC: How long does it take for you to make a helmet?

Andre: To do a helmet, when I spray paint it and cut it out. I think no more than three days and that’s really good if everything is going all right because sometimes the foam you try to cut the foam it might not go right and you have to go back. Usually just three days.

BiC: What about the full outfit of the Reaper you are wearing? How long did it take to make?

Andre: This actually took me six months and it was a lot easier because if you saw me last year that armor I did for my two sons and I took a whole year, but the reason why this took a little shorter time is because of the football shoulderpads under here. I was able to build the foam overtop and this is like a motorcycle crotch protector and I just build onto it and it makes it a lot easier and quicker. And I can move a little better. It’s still falling apart here and there, but that is expected. 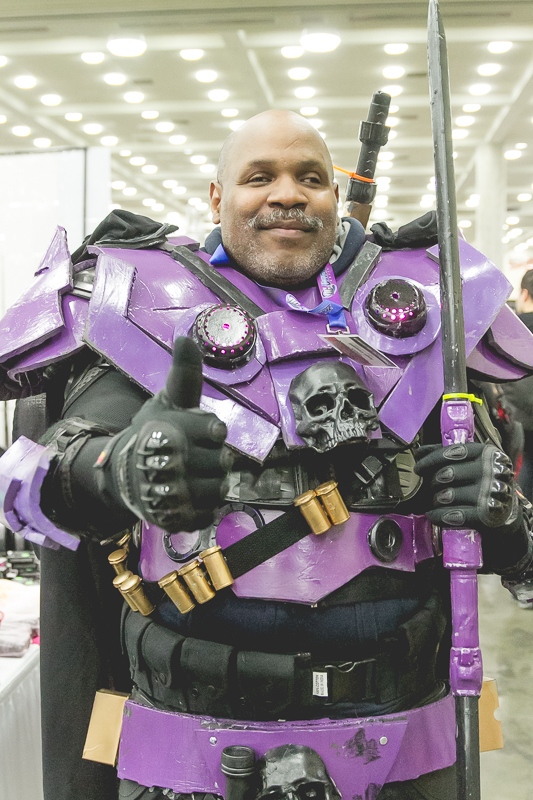 BiC: Can you tell us a little bit about your comics?

Andre: I have the [easyazon_link identifier=”B00CPR28TW” locale=”US” tag=”bounintocomi-20″]American Sentinels[/easyazon_link], which is based on World War II. People say, “Oh well World War II,” but picture this: It’s 1939 and the Nazis have invaded Poland. They come across alien spaceships in the mountains. Hitler orders his top scientists to take it apart and figure out how to use it to make weapons of mass destruction and defeat the allies before we get into the war.

I called it Genesis Origins: The American Sentinel because Dr. Genesis, an alien, created a process to create superhumans by splicing alien, human, insect, and plant DNA together. The specific characteristics and I always use a dragonfly as an example because they always say they have that flame. Can you imagine taking that one characteristic and putting it in a human and stimulating it with radiation or whatever to create superpowers? That’s what they tried to do. Everyone wants to volunteer for the war, so thousands of people volunteer. They (the volunteers) went mad, they got mutated, or they died.

So far only five survived the process and the reason why is because Dr. Genesis used his alien DNA as the glue to hold all of the foreign DNA together. Once he did that he was successful. I used a lot of real history, it goes all over Europe and everything and the South Pacific. So I actually incorporate war situations, but I just throw in a twist.

I also have Webspynn, he is a Native American, but he has spider powers. People say, “Oh spider-man clone”. Not the way he does it. He could touch this table and turn it to web and he doesn’t even know he is Webspynn. I have my HSQ Collection book, that is a collection of seven books. Captain Goodwill, Tagger, Fierce Operations, they are like super spies, I have Rebel 3 a Futuristic team of warriors that is trying to find other superpowered beings before the evil Mainframe and his ravens find them and destroy them. I have a lot going on and I just feel really blessed to be here and doing what I love to do. 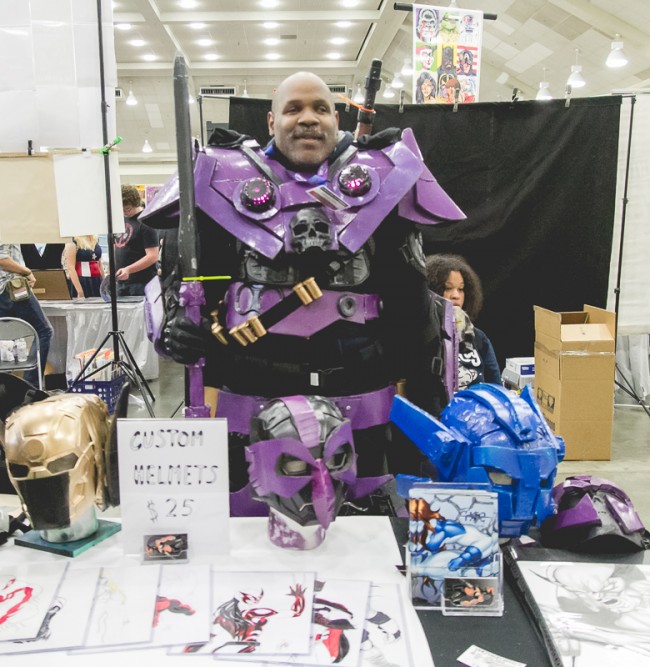 BiC: If we aren’t here at Baltimore, how do we find your comics and helmets?

Andre: My helmets and my comics are on my website. I also have my comics on ibook, kindle, Amazon, Kobalt, and Nook. That’s where you can find my comics.

BiC: Thanks for talking to us and enjoy the Con

Andre: Thanks, I appreciate it.