After reviewing Sevara #1 and The Showdown #1, we were excited to find out that Broken Icon Comics was going to be at the show. We stopped by their booth and spoke with their Director of Operations Eric Watkins to find out how Broken Icon Comics came to be and to discuss the other titles they are publishing. We even got a chance to talk to Damian Wampler, the creator of Sevara as well!

BiC: Hey guys, how’s it going? Would you mind telling us a little bit about Broken Icon Comics?

Eric: Broken Icon was founded in 2009. Our goal was to bring comics to the market that have edge. No cookie cutter, same thing that everybody else is doing. We aim to do something different and give creators that most other publishers wouldn’t give an opportunity to, to put out their stories. They get an opportunity to put their stories out through us.

We have creator owned titles, we have studio titles, we have 17 employees over six different countries. We have all walks of life that work for us. Damian is a U.S. diplomat, comic book writer, and novelist. Landon is an artist. He does all kinds of stuff. Mostly I go out and find talent. I bring talent in. I go through the process of looking at creator owned titles and see if they fit in our universe and what we are wanting to do and we kinda let our guys go.

We have a simple slogan “No Rules and No Apologies.” We don’t censor anybody. We let them do what they do, what they want. Tell the story they want, how they want, and the way they want to tell that story. So we are all about bringing in different stuff.

We mainly focus on the supernatural, science fiction, horror style because you don’t see a ton of it. It gives us an opportunity to do stuff that nobody else is doing. It gives an opportunity for unique stories with unique characters.

BiC: Would you mind telling us a little bit about some of the works you are publishing. I know Damian is working on Sevara.

Eric: Tell them about your Sevara, buddy.

Damian: Basically Sevara is about a shape-shifting goddess. She awakens from a 10,000 year old sleep and she finds her memories have seeped out and infected all of humanity. All of humanity is evil and cruel and she has to undo it. Even though she can change shape and she has these powers, she has to change the minds of everyone on Earth. It’s like a metaphor for ideologies that are violent and ideologies that twist religion for their own good, but I didn’t want it to be boring and I didn’t want to preach to people. I made it full of giant robots and hover bikes and swords and stuff! 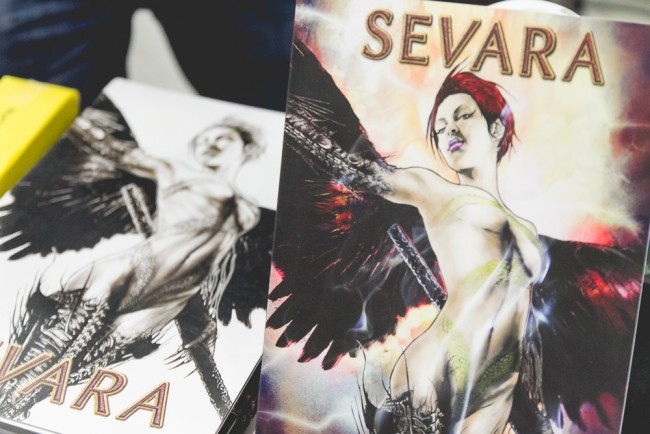 Eric: Sevara is one of our flagship titles for 2015 going on to 2016. It is one of our marquee graphic novels available at Amazon, Barnes & Noble, and our website Broken Icon Comics. Our other flagship title for the year is The Horror Show which is written by James Maddox and illustrated by Todd Beistel. It is a story about these two friends that go to a cabin for a weekend of relaxation, but it is actually a scare tactics TV show and there is a monster inside the cabin. All it does is awake the creature when the show is going on. Those two guys have done a killer job for us working on some other titles.

James Maddox has also done the Eccentrix, that’s a take on super heroes that’s not so super. When they are saving people they are doing more damage than good. The understanding that sometimes the power they have is too much. James has also written The Dead. Him and Jen Hickman and we just recently acquired that book and it’s going to be big for us going into 2016. It’s another fantastic story about this guy who is dead and he is in his own afterlife. You get to see other people’s afterlives and how they view it. We also have a lot of really great series that are getting ready to be collected into graphic novel.

The Cowboy Gauntlet, which was worked on by myself and Patrick Mulholland, it’s a take on bandits and Aztec technology. Pete which is Clint Ritchie and myself and KJ Mendenhall, who is one of our veteran writers who has done Blood Tempest, Alone, and Hunter Prey. He’s done horror stories galore. It’s (Pete) about a twelve year old kid who survives the apocalypse for two years by himself. You get to see what this kid is doing to survive and how he avoids human contact because in the end when the world has crumbled humans are our own worst enemies. We are going to do far worse things to each other than any kind of apocalypse can do.

Traitor’s Grace is another one of our big ones that is going to be collected this year. Nicholas Wentland, Thomas Clough, and Landon Franklin with Robert Nugent are our creative team. It’s a take on the Civil War, but it’s a steampunk Civil War where brothers are separated by their sides. One brother instead of fighting for his side is using his ability as a sniper to keep his brother safe no matter who he has to kill to do that.

We have a lot of really great stuff. We have a lot of great creators. We have people as young as sixteen years old when they signed a contract with us. A young lady named Jodie Springer who has done her first book. We have a fantastic colorist in Kansas named Robert Nugent and Aimee Helsper. We have one heck of a great team that works for us. We have an amazing team of editors with James Maddox, Art Director Rob Dumo, our Printer Coordinator and Coloring Editor Nicholas Wentland and our Managing Editor Rebecca Null. We have a great team that puts the best quality books out. 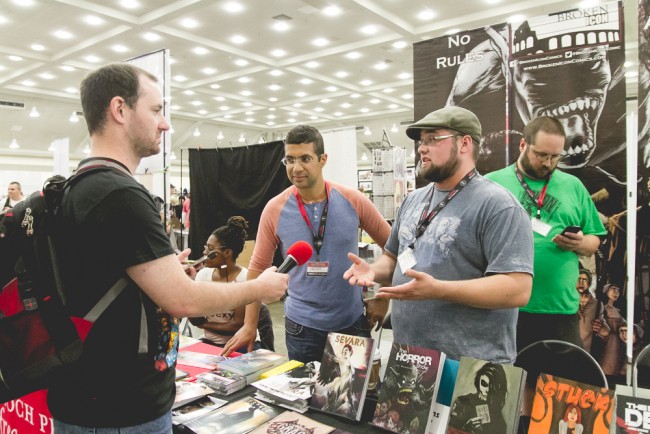 BiC: Do any of your books crossover into the same universe or are they all stand alone?

Eric: A lot of our books, there will be ties in between each book. For instance, there will be one book you will be at a hotel and it will be the name of a main character from another book. You will be at a restaurant and there will be a billboard against the wall that will be another book that we have. We crossed them over in that sense. Going into 2016, with some of our on-going titles there are actually some plans to let them go into each other’s worlds a little bit. Kinda mix in. I think it would be a really great idea to have some of these characters meet each and get to see how they react with each other.

BiC: Tell us a little bit more about the company. How did you guys get started?

Eric: My business partner, James Maddox and I found a local creators groups where we are from in southern Ohio. We went to this creators group and the only reason I went was because my wife was pregnant and it was at a taco joint and my wife wanted tacos. We went and my wife met him before I did. She said. “You need to go talk to this guy. This guy wants to do what you want to do.” Everyone at this group wanted to focus on doing their own webcomics and putting them on their own websites. James and I wanted to make books and actually put books on the market and go to shows. So James and I had a few conversations after meeting each other twice. We stopped going to the meetings. Started planning our own stuff. We llc’d. Started production on two titles and we actually debuted at Baltimore Comic Con in 2009. It was our first ever show as a company. So this is seven years. Six years. Six years. I’ll get this math down at some point.

Eric: Yea thank you. We appreciate you guys. You got a mic. Thank you so much.