While weaving our way through the numerous aisles in Baltimore, the Indigo Comics booth caught our eye and we stopped by to chat with Robert Reichert about Indigo Comics and some of their upcoming and current titles they are working on specifically Zachariah Thorn. We also discussed their innovative business model that focuses solely on digital comics.

BiC: Where are you from?

BiC: Who are you?

Robert: My name is Robert. I’m Robert Reichert. We are Indigo Comics. This is our first con, our first book published right here, Zachariah Thorn #1. My brother is the writer, I am the colorist, and our artist is a guy named Bonkz, and he does some fantastic art.

Zach is kind of a supernatural story. It is a little bit superhero, a little bit supernatural. A little bit of Joss Whedon flair. Little bit of fun to it. It’s a digital comic, so we are digital first. We have done a small print run for this, but our goal is to primarily be digital. For instance, if you share our Zach book on Facebook, to your Facebook friends you get the book for free. Our goal is to hopefully get people to take these and you go on and follow the progress for all of the different stories. 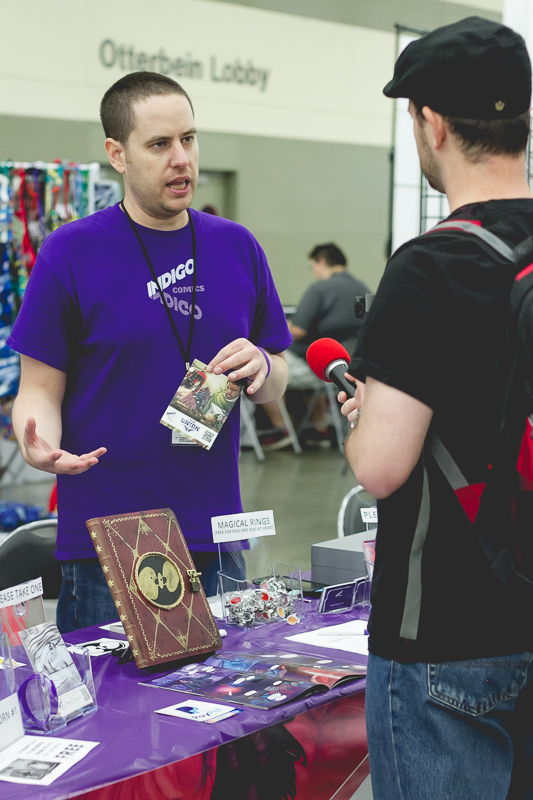 BiC: You mentioned you are digital first. Do you do it on a weekly basis or do you publish it all at once?

Robert: We are playing with both actually. We are publishing on Taptastic as well. We are finding that you can do a couple panels at a time on Taptastic and people will come in and check it out and read and then subscribe. So when you put up some more panels they come back. It also helps with advertising because you display more ads. That is the ultimate goal that we could at least fund these with ad displays. We give the content away for free and you come check it out and the ads pay for the production would be the idea.

BiC: Can you tell us a little bit about the supernatural qualities of Zachariah Thorn?

Robert: Zachariah Thorn, he has the Eye of Ariah, it’s an amulet that he acquired when he was 16 years old. I think he inherited it. Zach gets this amulet and it basically awakens the darkness into the world. It is his job to put it back in. There is this double-sided thing to it, where he is actually the one who is supposed to bring the darkness into the world. He is the darkness bringer. His best friend is a zombie that he actually reanimated. Eli, the zombie. There are some ancillary characters and its really kind of a group story and Zach is the figure head.

BiC: What else are you working on at Indigo?

Robert: We have The Union, which is going to be a superhero post-apocalyptic story. The goal is to have this be a little heavier story, that is going to deal with philosophy, concepts of how humans interact and relate to technology. We are talking a post-apocalytptic setting.

We also have Beyond the Lighthouse. It is kind of a mysterious kind of Lost-feeling story. This girl wakes up, she is on the beach, there is a lighthouse. She walks into the house and there are pictures of her up and she doesn’t have any memory of this. It is kind of a fantasy, mystical story.

And then Shadow of Titan, which is the furthest behind, nothing produced yet but it is a superhero story. The idea is that all of the superheroes have been eliminated and they started a genetic program to reintroduce the super gene to the children of the previous heroes. A couple of ideas out there.

BiC: Are these kind of all in the same universe? Are they connected at all or are they stand-alone?

Robert: When we get to that point, the idea is to actually have a scientific-based universe and then a magic-based universe. Zachariah Thorn and Beyond the Lighthouse may exist in a similar universe and then we have The Union and Shadow of Titan. We are actually playing with the idea, one comes from the different era of the others same timeline. The goal is to link them and build a universe eventually.

BiC: You mentioned a Facebook page and if you share Zachariah Thorn, you could get a free book. Can you tell us a little bit more about how you can find out more about Indigo Comics?

Robert: If you go to Indigo-Comics.com, you can go to any of the landing pages for the actual titles. There is the option to read right through our site. It is compressed a bit so it’s maybe a little lower res. You can go and download a high quality pdf through Gumroad or you can go to Taptastic, which is this newer platform. It’s kind of an infinite scrolling type of idea. The book Zachariah Thorn is published in its entirety there in three chapters.

This is a Baltimore exclusive promotion if you share. We have that actual post which is Zachariah Thorn, read it for free at these locations. If you share to your network and you show us, you get the book bagged and boarded for free. 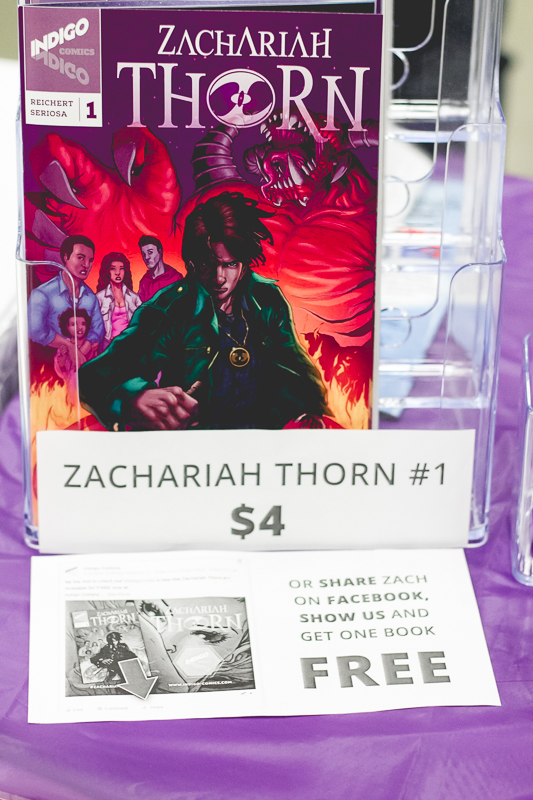 BiC: Since you are primarily digital are you afraid that people who are still old school might not be interested?

Robert: I love it when people ask that. We have talked to four different retailers already today and we have exchanged information and contacts. Our belief is that the retailers need to become the showrooms. It’s the same ideology that is happening to Best Buy and the bigger retailers. The idea is that you go in and you browse the showroom. You go home and purchase online. Our pitch to the retailers is: Look, we will provide a little pop display or point of purchase display and in the display we’ll have cards, the cards will have a QR code and websites where you can access the content and underneath of it will be your logo, so it will be The Union presented by Fudd’s Rabbit Hole in Pasadena.

It’s a free giveaway for them, a free download. We are not competing with them. We’re not selling digital printed books. We’re just digital. We’re not even selling the digital and if they want printed books they can get them through us and sell them in the store as well. We are completely non-threatening to stores. As a matter of fact, I envision there is a potential disrupt in this industry waiting to happen. We believe the wave is coming and if we can just ride it maybe it will happen.

BiC: That’s really awesome. I think that’s a really innovative business model you have going on there.

Robert: I’ve worked for Brighton and National Retailer. That’s the philosophy in these big box retailers. You go into the store and you can’t put everything on the floor. You can’t put everything you can possibly sell on the floor. That is where digital comes in and you have the digital overlay that your store can fulfill the items the people want and you make the store a social space. Have gaming, have toys, you have more shelf space for toys and things like that. The bottom line, and I know people hate to believe this, it’s going digital. They are going digital. The print, it’s wonderful, but its gonna continue to decrease. The digital will increase and that’s what we believe.

BiC: Thank you very much!