Garth Ennis has a new book out today from Titan, [easyazon_link identifier=”B017K4QF34″ locale=”US” tag=”bounintocomi-20″]Johnny Red #1[/easyazon_link], and we got to sit down and chat with him about it and his fascination with military history and we might have just snuck a question about Preacher in there!

BiC: What can you tell us about the adventure you have planned for Johnny Red and the Falcons?

Garth: In late 1942, when things are at their darkest for the Russians during the German attack on Stalingrad, Falcon Squadron are given a top secret mission- one their leader, Johnny Redburn, is forbidden from taking part in. Johnny and Captain Nina Petrova (leader of the all-female Angels of Death squadron) do a bit of digging around and discover that someone very senior has panicked, and initiated an operation that could prove disastrous for Mother Russia in general- and for the Falcons in particular.

BiC: You’ve done a lot of writing about World War II, notably the War Stories series that focuses on the horrors associated with it. What did you want to do differently with this story?

Garth: This was a specific attempt to revive Johnny Red for the modern market- to give the character a proper ending, and to try to ensure that the legacy of Tom Tully, Joe Colquhoun and John Cooper would survive and be celebrated.

BiC: How did this project originate? Was this an idea you brought to Titan, or vice versa?

Garth: Once they got the license and began reprinting the older strips- the collections of which I wrote the intros for- I began thinking about a new JR strip. I knew Titan’s Nick Landau was thinking along similar lines, and that it would only be a matter of time until he convinced the owners of the story that a new series could work.

BiC: What themes from this story do you think are going to resonate the most with modern readers?

Garth: The notions of heroism, adventure, intrigue and nefarious double-dealing are all pretty universal, I think. Beyond that, we’re talking about a historical reality that will be new to many readers- the story is set on the Eastern front, where through enormous sacrifice the Russian people inflicted the vast majority of German battlefield casualties, and therefore did far more for victory over the Nazi regime than anyone else. Contrary to what we in the west have been led to believe, our nations’ role in that victory was very much the subordinate one. 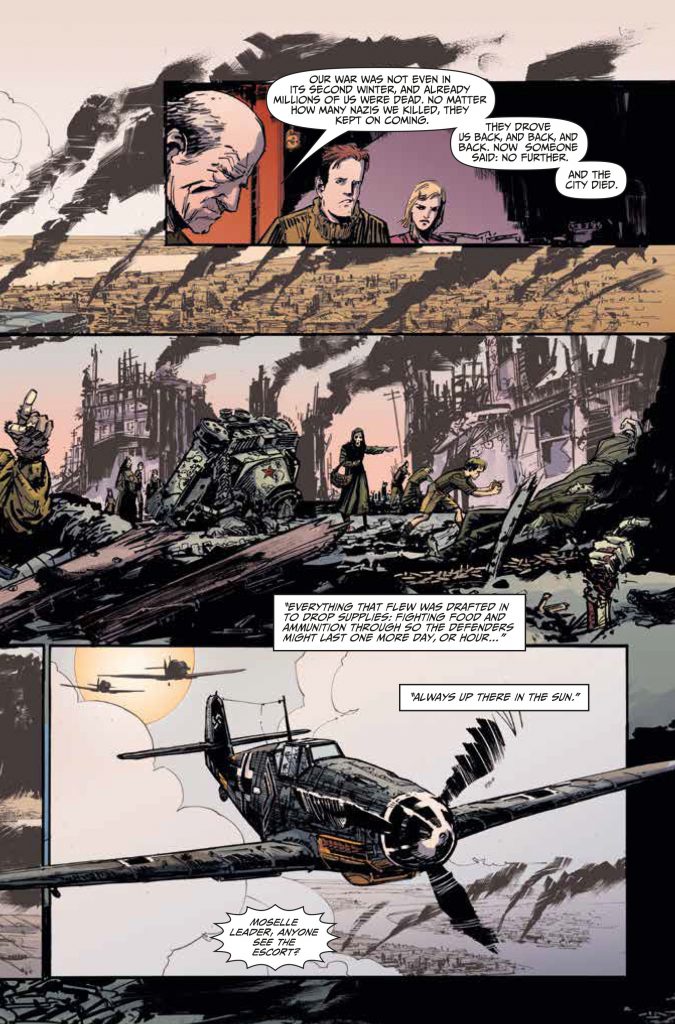 BiC: You and Keith have worked together a bit, and beyond him being a natural choice for his talent on aviation comics, you two must have a rapport. What has the process been like on this book?

Garth: In one sense, it’s the same relationship I enjoy with any really good artist- each of us trusts the other to get on with the job. But in another, Keith is very much the artist I’ve been waiting for all these years- he’s just as nuts about all this WW2 stuff as I am, he has it in his head anyway without any need for research. It’s funny to think that we both grew up in Ireland reading British war comics, and after all these years we couldn’t be happier doing our own.

BiC: Do you find that aspect enjoyable, or is it just part of the job?

Garth: Hugely. Military history has been a passion my whole adult life- it was, in fact, the comics I read as a kid (including Johnny Red) that led me to it.

BiC: Are there any other classic UK characters that you’d like to write? Maybe Dan Dare or something different in tone?

Garth: Wrote Dan Dare about five years ago. Beyond that, no, although I’d love a crack at Hawk the Slayer- simply the greatest sword & sorcery flick ever made.

BiC: The Preacher trailer will be released soon, and word is that The Boys is being shopped around. Are you interested in being more hands on with adaptations, or writing for television? Maybe for a certain gun toting, skull wearing vigilante?

Garth: We’ll see. Not sure how much time I fancy spending in LA.

BiC: What are a few comics that you are currently keeping up with?

Garth: I read everything Alan Moore and Brian Vaughan do, and the collections of John Wagner’s 2000AD work. Not much else.