A captured, energetic young girl and a robot have to escape from a prison guarded by blood-sucking vampires who want nothing more than to feast on their blood. Will they be able to escape? How does it fare?

[easyazon_link identifier=”B01BRD18F4″ locale=”US” tag=”bounintocomi-20″]Interceptor #2[/easyazon_link] doesn’t feel like a second issue. Instead, it feels like a complete one-shot story with the possibility of a sequel. Writer Donny Cates and artist Dylan Burnett focus the book on the prison escape. While there is plenty of dark, gory action as one would expect from a Heavy Metal book, the characters Cates and Burnett create are dynamic and exciting, specifically Weep and her “new robot alien friend.”

Cates’ dialogue and Burnett’s artwork perfectly complement one another to capture Weep’s personality. She is energetic, excitable, extremely curious, and surprisingly confident. Above all, she is still an excitable child who resists authority figures. Cates and Burnett perfectly capture this when she responds to her alien friend, “Oh my god, What?!” with a half indignant, half quizzical look on her face.

Making Weeps’ character even more enjoyable is her alien friend whose personality is almost the complete opposite. She is stoic, quick to anger, and mission-focused. The back and forth between the two is great and you really get to see the two bonding in a jail cell. 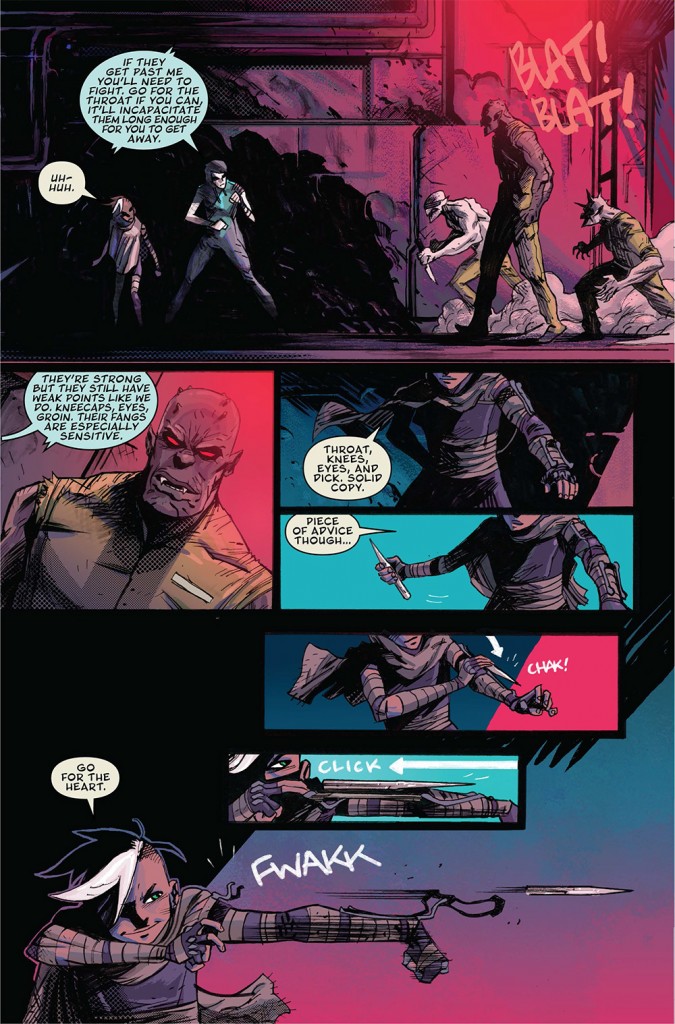 The excellent dialogue isn’t just focused on Weep and her alien friend; it runs throughout the book whether it is between the Vampire Queen and her disobedient military leader or disagreements between Weep’s sisters, Wreak and Woe. All of the characters are interesting and you want to learn more about them and their story. However, Cates assumes you have read the first issue and fails to provide the names of some of the characters such as the vampire queen, her disobedient enforcer, and Weep’s robot friend.

The story has a ton of layers outside of the straight-forward prison escape and rescue. Weep’s alien friend has her own guarded mission, while Weep’s father, Rudolph, leads a resistance against the Vampires and attempts to protect the rest of the humans from the ticks. There is also political intrigue within the ranks of the vampires. Cates is able to make it all flow together and make sense. The story threads never get twisted up.

Burnett’s artwork is fantastic. It is dark, gory, and violent. He is able to capture the power of the Vampire Queen while also contrasting it with the defiant deference of her military leader. The facial expressions of the military leader are fantastic because Burnett makes his facade so apparent to the reader, but seems to fool the Vampire Queen.

The action sequences are absolutely phenomenal and a little bit comical. There is one page where Weep is on the shoulders of a vampire stabbing out its eyes. The perversion of a typical fatherly position with his daughter gives the scene its comical tone. There are also some great scenes where Woe and Wreak rappel down into the vampire’s base blasting them with their assault rifles. Burnett makes it exciting and makes sure the danger to the characters is extremely real. However, there is one scene where Cates doesn’t fully explain what happens to a character. It is especially confusing given how he characterized them previously in the issue. 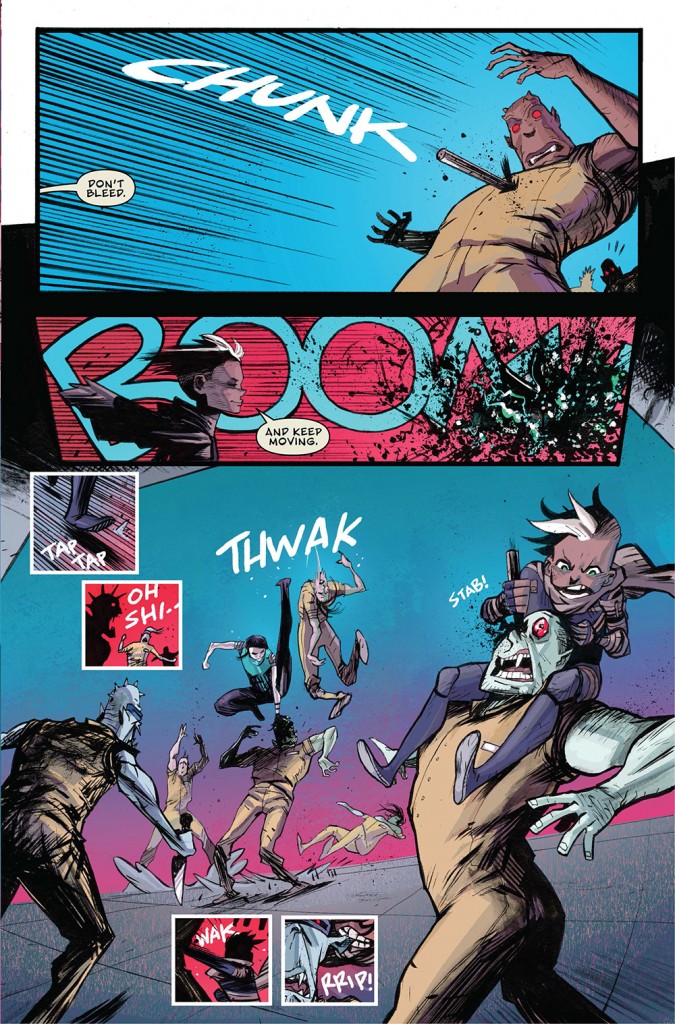 The lettering in this was also top notch. You could hear the jail cell slowly opening and then fully slamming open. It raises the level of danger and increases the anticipation for the upcoming action sequence. In addition, the lettering accentuates the action sequences and brings them to life, allowing you to almost put yourself in the scene hearing the violent attacks.

[easyazon_link identifier=”B01BRD18F4″ locale=”US” tag=”bounintocomi-20″]Interceptor #2[/easyazon_link] is a rip-roaring adventure. It has excellent action sequences, compelling characters, and a multi-layered story. The action is fast-paced, violent, gory, and exciting. The dialogue is compelling and brings out the characters’ personalities. If you are looking for a fun, violent, adventure story, you should pick up this book. It’s great.