Chip Zdarsky and Valerio Schiti combined to craft one of the best Marvel comic book series on the shelves right now. Zdarsky is able to combine devious plot twists with classic Marvel humor and action for an excellent read.

And one of those classic humorous moments is Tony Stark’s latest invention.

But let’s provide some context first. The Thing and the Human Torch are reunited and they have discovered a technological marvel created by Reed Richards called the Multisect. The device allows them to travel the Marvel multiverse. However, before they can set off to search for Reed Richards and Sue Storm who are lost somewhere in the Multiverse, they have to find a cure for the Human Torch’s weakening powers.

The two travel to Booklyn, New York and meet up with Hercules in an attempt to discover how the famed hero regained his heroic powers after losing them. 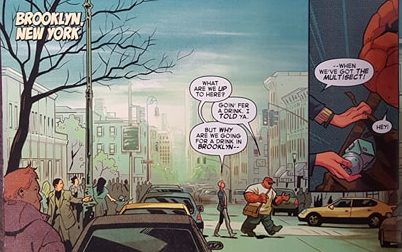 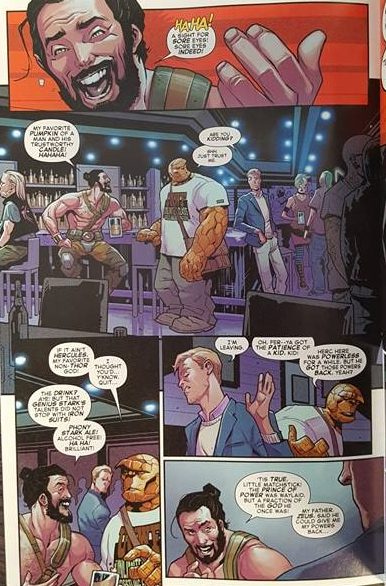 Why, oh why, would Tony Stark want to plague the Marvel Universe with phony Stark Ale that is alcohol free. The entire point of drinking ale is for the alcohol. This is one of those inventions that Tony should have scrubbed from his memory permanently before even drawing up a recipe.

But to make matters worse, this bar in Brooklyn is actually selling the horrid drink! NO! Why are they purchasing this awful commodity and then trying to get their customers to buy it? It ruins the point of the bar! I wouldn’t be surprised if that place goes out of business quite quickly. Who wants to go to a bar that serves alcohol free ale?

What do you think is this the worst invention Tony Stark has come up with? Or can you think of a few others?