Dan Jurgens is concluding his run on Action Comics in a couple of issues. But before that, he has a few loose threads to address. Jurgen’s run has included everything from amnesia and Mr. Oz to Superman Lex Luthor and multiple Clark Kents. It’s been both weird and interesting. A remarkable shift from his early Superman work, and a reminder that this is one of the foremost Superman comic writers.

But before he exits Action Comics, he’s going to have some…fun with readers. In case you’re not up to date, Superman is in a bit of a pickle. After attempting to verify that Mr. Oz is his father, Jor-El, he went to Krypton’s past. Unfortunately, during some mishaps he found himself in a Universe where Krypton never exploded. He also happened to find a family of…Zod’s.

Due to a convoluted story and some mishaps with Booster Gold, Superman is incapacitated at the moment. But in the previous issue, Lois got some terrible news about her Father being imprisoned. Like any good hero she leaped into action. And like any good hero, her son, Jon, followed.

Unfortunately, Logamban soldiers are on to them.

As they save Samuel Lane from imprisonment, Lois and Jon find their way out of the facility. While Lois had some help getting in, there’s no help in sight for their escape. At one point they linger just a little too long out in the Jungle, trying to create some sort of plan. They don’t see the machine gun turret in the distance. And then the worst happens…

Now, this is just comic trickery right? Those bullets couldn’t really have gone through the entire Lane family and Jon Kent, could they? Apparently they did.

Rapmund’s art is particularly awesome and gruesome with great inks by Brett Booth and colors by Andrew Dalhouse. However, the final panel is noticeably dour. But with good reason. 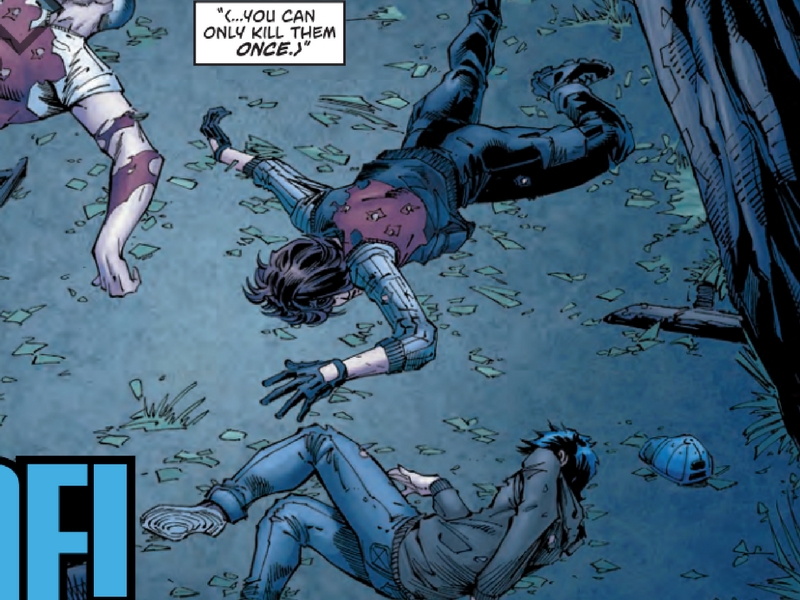 So, those are definitely the bullet-riddled bodies of Lois, Jon, and Samuel. While Jon doesn’t seem to have any bullet holes in him, or blood, it could just be a way to differentiate him from the other two. But nothing is coincidence, so his being half-Kryptonian may help him survive the day.

But what about Lois and her Father? That’s blood; those are bullet wounds. Just how is Jurgens going to write these two out of this one?

Luckily, the Action Comics writer has created a couple of possibilities. First of all, as Lois entered the Logamban compound she was aided by a Logamban soldier. This soldier could also have somehow made it appear as though he murdered the Lane and Kent family without actually having done it. But that seems a bit too easy.

Chances are Jurgens is making his story a little bit crazier. So this Samuel and Lois could definitely be gone. Since this is a comic book though there are plenty of ways to bring someone back from the dead. Including time travel!

And who just so happens to be the B or C-list superhero trapped with Superman at the moment? None other than Booster Gold. The Master of Time could be just the kind of hero Superman needs to help bring his family back from the dead. If that’s actually where they are.