On Wednesday night, a reader messaged me and asked me if I’d seen that I was attacked by name in disgusting terms I could have never imagined seeing in a comic. The reader sent me screen shots of Dynamite Entertainment’s Centipede #4. Most of the details have already been reported here on Bounding Into Comics. It was a shock to the system to see such horrific writing about me in print, especially as I’m just launching my comic career with my wildly successful Flying Sparks IndieGoGo campaign.

At this point, we know the culprit for inserting the language is likely Taylor Esposito, and I believe he acted alone. He had established motive as I in my journalistic work broke a story about professionals harassing Richard Meyer in which he was in the screen shot. It’s unlikely many people in the comic industry beyond that direct group knew me at the time. The timing is right for when the work was done as well. But instead of apologizing like he should (I’ll forgive you Taylor, just talk to me), has made a story about a nameless “intern” and subsequently locked down his social media account so he can’t be questioned on it. That’s not the way to handle things.

The correct way to handle bad situations like this is how the company itself, Dynamite Entertainment, took care of this business in a swift manner. But there’s a history of organizations failing in treating me with basic human dignity, and I think it’s important to show the contrast between how Dynamite did the right thing, and how others are failing at it.

My History Of Professionals Harassing Me Over Politics

For those unaware of my recent past, ever since I called out Marvel’s apparent policy of blacklisting (or never hiring) conservatives as writers on The Federalist, I’ve been hit with waves of hate ranging from industry blacklisting, to the doxxing of my children, to having a strange anonymous package being sent to my house.

When this was going on, I was under fire from an organization called the Science Fiction Writers of America. Their stated mission is to be a professional guild, a lot like Hollywood has SAG or similar, in order to help foster professional writers and protect us. Unfortunately, their president has a bizarre personal vendetta against me, motivated by my outspoken political opinions, and they’ve gone overdrive in attacking me.

The events I mentioned above where I was harassed and threatened were directly timed after some of her vicious personal attacks on me on social media. I tried to email with her to reason, to tell her fans to knock it off, that there’s a line we can’t cross, that we have to be professional, but she only doubled down and attacked me further. She abused her power to try to discredit me as an author, and then when I qualified for SFWA, which is no small task, she riled up the membership committee to ban me.

Instead of coming together and dialing down the rhetoric, their president escalated it at every turn. And it did her no good. SFWA as a brand is tarnished now because people see that it is a clique, a politically-driven high school lunch yard where bullies pick on outsiders. No conservatives feel safe around the people in charge. It would have been very easy for their president simply to say “we don’t attack children, we don’t send things to people’s houses or try to hurt them, we are better than this,” but she refused to do that.

The Right Way To Handle These Situations

Now let’s look at how Dynamite Entertainment handled the situation in contrast. Dynamite is known for licensed properties for the most part, and I’ve actually been a patron of their books. My artist on Flying Sparks has penciled several of their books, so we are very tied into the company, if only on the periphery.

They saw what happened and took action like this:

1. Responded quickly, didn’t delay.
2. Admitted the problem, apologized for harm caused.
3. Assisted me in my career. 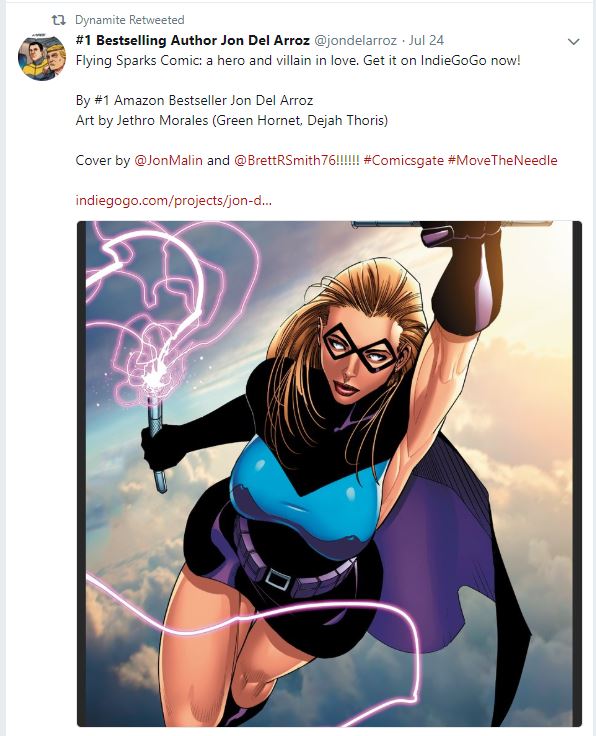 That’s a beautiful response if you think about it. It’s consummate professionalism on a corporate level. They say the writer/artist/editorial were not aware of the attacks on me in the book when it released, but they are correcting it for the trade paperback version.

You might ask why would I believe them? Look at the above actions. They didn’t run and hide, didn’t go out publicly and bash me, didn’t pull some “I deserve it for being controversial,” but instead they responded quickly and acted to help me personally.

Think about how hard all of that is to do in the current political climate. We’re in a position where companies are doubling down constantly. Where someone like Sarah Sanders is thrown out of a restaurant because of her job working for the president. Where the industry standard through groups like Marvel and SFWA are simply to just attack harder and try to destroy someone over their political beliefs. Dynamite bucked that trend.