Crowdfunding website IndieGoGo shut down Vox Day and Arkhaven Comics’ Alt-Hero: Q crowdfunding campaign. The comic book series which is being written by Chuck Dixon with art by Hélix Haze and colors by Arklight Studios had trended #1 on the site when it first launched.

While the main IndieGoGo page has been suspended, backers for the project also received emails indicating the campaign had been shut down and transactions had been refunded, and once again stated the campaign didn’t comply with IndieGoGo’s Terms of Use. 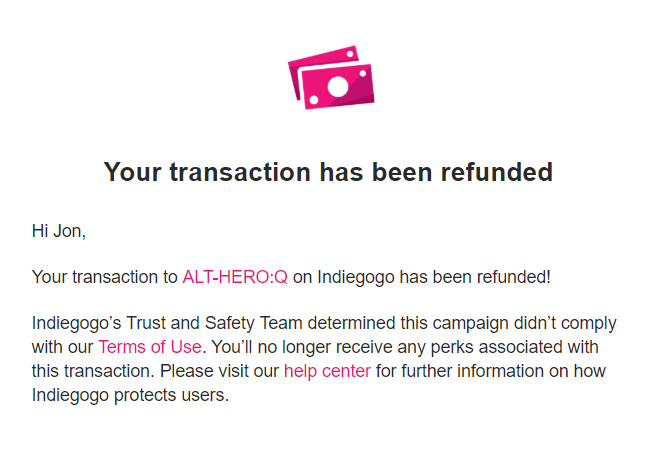 IndieGoGo’s Terms of Use indicate they can terminate any project at a whim.

It specifically states, “We have the right to monitor, terminate, suspend, or delete any User Account at any time for any reason, or no reason. It is our policy not to comment on any reasons for termination and we have no obligation to provide you with a reason for termination.”

The termination of the campaign comes after Bleeding Cool ran an interview with Vox Day.

In a livestream, Vox Day believes Bleeding Cool readers lobbied IndieGoGo to get the Alt-Hero: Q book pulled from IndieGoGo.

“We’ve got everyone’s email addresses and so forth, so if we have to set up our own crowdfunding platform, we will do so. However, in light of the fact that Indiegogo has done this retroactively, we are already looking into the legal aspects of their actions. I am not yet aware of any reason, in fact, I do not even know if the scheduled payment for the campaign was delivered on schedule or not two weeks ago. I assume not, but I won’t be able to confirm that until tomorrow.”

Vox also indicates he’s spoken with a lawyer and is likely to take action against IndieGoGo.

“I’ve already talked to The Perfect Aryan Male, the architect of our lawsuit against GT Interactive. Suffice it to say that the band is back together!”

“Looking into legal redress. If we have a good case, we will pursue it.”

Jon Del Arroz tells me The Ember War will remain on IndieGoGo for now, “Yes. For now I don’t have an alternative and we’ve already got more than 90% of the art funded by backers. Depending on what happened here, I’m certainly considering other options for the future but we can’t drop this kind of funding and disappoint backers.”

Ethan Van Sciver, who has raised quite a pretty penny for Cyberfrog: Bloodhoney told us:

“I don’t have any information as to why that book was cancelled, but look forward to learning more.

I’ll still use the platform, as they’ve been responsive, helpful and interested in my projects.  Should any of that change, I’ll be sure to use ComicsArtistPro Secrets to explain to my tens of thousands of supporters who are looking forward to REIGNBOW BRUTE and the next installments of CYBERFROG.”

One thing is very clear is if this is a targeted strike against Vox Day and Arkhaven Comics because of his politics, it’s the latest in what appears to be a campaign against right-leaning outspoken individuals and organizations.  World of Warcraft Vanilla Team Lead Mark Kern described this type of behavior as a strike in an Information Civil War.

Kern described this war as one being “fought over information and economics. It won’t be a shooting war. Even if it becomes one, you will have lost far before then as your communication are cut off, your payment processors and jobs revoked, and you are erased from the Internet.”

And there have already been a number of blows fired. Firebrand commentator Alex Jones was erased from nearly all social media including Facebook, Twitter, Apple, and YouTube. Roosh Valizadeh also indicated he would be putting the Return of Kings site on hiatus because they were banned from “PayPall and countless ad partners.”

One Angry Gamer has also been the subject of a number of hacks DDOS attacks that have put the return of the site up in the air.

Technology companies are definitely using their influence to shut down people, and it looks like Vox Day might be the latest victim.