Wherein we finally get a look at the book that broke the internet. We decide that we really like it in spite of its flaws. And we come to the ultimate conclusion that Ya’ Boi Zak really loves GI Joe and ‘90s action flicks.

Runnin’ With The Devil

Nobody that reads this website needs a re-hash of how important Jawbreakers – Lost Souls is, nor do we really need to dive into any of the internet hurricane that led up to its release. If you don’t know the details feel free to go here, here or here, or simply check out Richard C. Meyer’s You Tube Channel and you can read all about the long and sordid history behind this graphic novel. The details of how Jawbreakers – Lost Souls came to be are important, but irrelevant to this review. 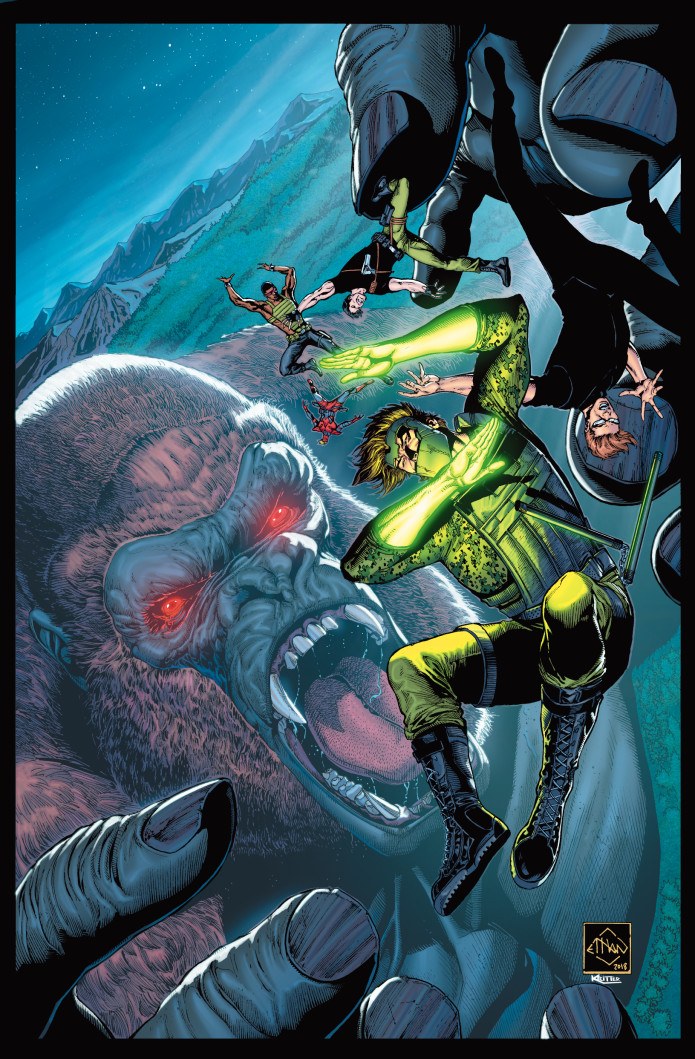 I Can See For Miles

Jawbreakers – Lost Souls is a visually stunning package. The cover by master artist Ethan Van Sciver is one of his best and I was a little sad that Meyers couldn’t afford his page rates to do the whole comic, but only until I opened it up. Artist Jon Malin brings his A game to this project and the result is lush, sweeping landscapes, an inverse square law violating giant ape that rules every page he’s on and lots of superb wall to wall action. Malin’s art is generally reminiscent of the best of ‘90s action oriented comics. It’s just stunning, and Malin’s art alone makes this graphic novel well worth the price of admission.

The colors by Brett R. Smith are amazing in their subtlety. He is a consummate professional and possibly one of the best in the business. Smith’s work here is subtle and understated to enhance the artwork. You don’t really notice how good the coloring is until about the third read-through when you realize that everything is so on point that you can tell what the frikkin’ time of day is just by how each page is colored.

The story is absolutely a lot of fun, but it is a bit of a Frankenstein’s monster. The plot starts out a bit weird but ultimately doesn’t get bogged down with a lot of extraneous detail. An ape goes through a mystical portal, loses its’ soul, grows to an impossible size and starts terrorizing the countryside. It proceeds to stomp the bejeezus out of everyone and eats all their treasure because… why not. Oh yeah, and there’s a cool looking cyborg warlord after the ape and a native wizard I.T. guy who shows up to help explain how to beat the giant ape… sort of. The Jawbreakers are an international team of mercenaries with super powers that are hired by native warrior woman Xaxi to bring the giant ape to heel. 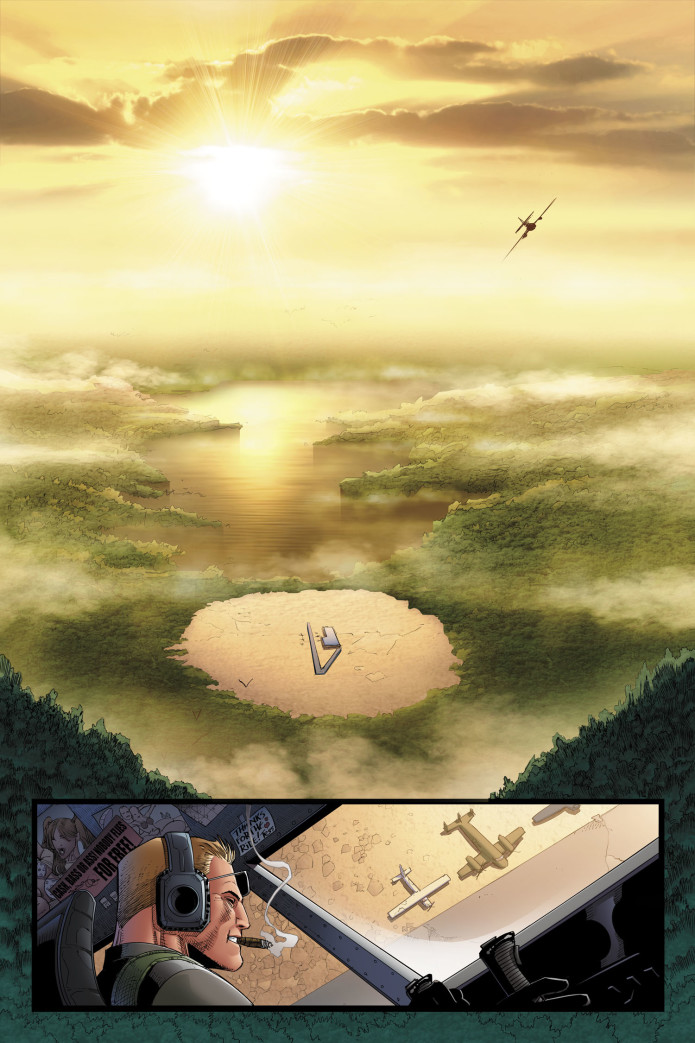 The team dynamics are where Meyer really shines. The characters have more than a little depth to them and you get hints that there’s more backstory to each of these guys coming later. The banter between the men is pitch perfect military speak, whether they are giving a situation report or just roasting each other. The Jawbreakers work well together like a finely honed military unit should. Even their support team is more than competent. Meyer writes the interplay among the various Jawbreakers teammates effortless and smooth. He draws heavy inspiration from Larry Hama’s G.I. Joe and Mike Baron’s run on The Punisher. Meyer keeps the plot moving like an out of control freight train on fire being driven by an adrenaline junkie on speed.

The story is so fast paced that Meyer seems to forget that we don’t know who these characters are or what their powers do. In fact I found it amusing that the first scene with the Jawbreakers team would have really benefited from a Scott Pilgrim freeze-frame montage with little clever blurbs that detail the person and powers. Meyer sketches over necessary interstitial exposition that would have given the overall story more of a sense of internal logic. The relationship between Kuffs and Xaxi, and the genesis of the giant ape really suffer for want of further on camera exploration. 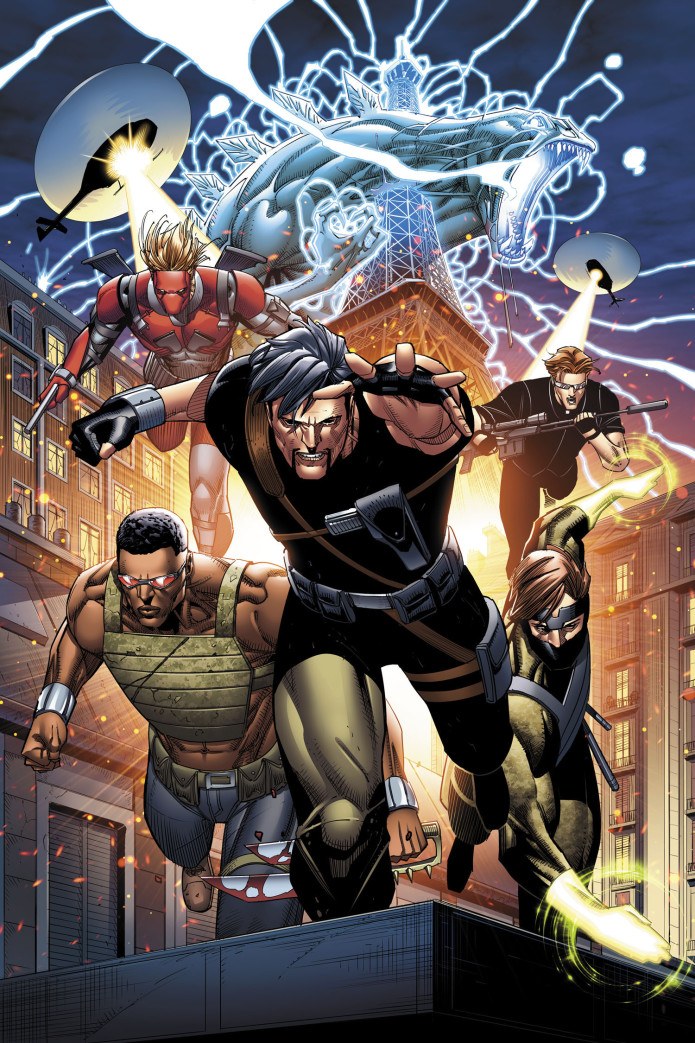 These are ultimately small gripes though. I get why the story is so rushed. Meyer had no reason to expect that Jawbreakers – Lost Souls would sell as well as it did, and he cut down the page count dramatically by including remastered versions of the first two Jawbreakers floppies. He packed everything he could into the main plot of Lost Souls with the expectation that it might be the only shot he got at this. In hindsight I think it would have worked a lot better to cannibalize the relevant backstory bits from the first two Jawbreakers stories and weave them into the main narrative of Lost Souls.

The most important thing about Jawbreakers – Lost Souls and the thing that makes it better than almost anything currently coming out of Marvel and DC is that it’s done with moxie and a lot of heart. You can really tell that everyone who worked on this project actually cared about it. Meyer obviously loves these characters as much as he loves comics, and I’m quite certain there’s much more Jawbreakers to come. In the meantime, Jawbreakers – Lost Souls is a fine graphic novel package that’s like a double shot of Johnnie Walker Black Label with ‘70s classic rock playing on the jukebox in the back. It will warm you right down to your toes and just make you smile.