The campaign for Zack Snyder’s cut of Justice League seeing the light of day has reached the mega-institution San Diego Comic-Con. Billboards in support of the movement, made possible by funding raised by fans, went up along a northbound highway outside the city this week.

The billboards feature silhouettes of the team and the infamous “#ReleaseTheSnyderCut” with the caption “The 3 1/2 hour untold story of Justice League.” Alessandro, a contributor to the JLU Podcast, and actor Will Rowlands (Amazon Prime’s Silent Eye) posted photos to Twitter.

Money is being raised to promote the Cut’s release. Half the funds are going to Suicide Awareness and Prevention. Over $106,000 has been raised so far.

“We are so touched by how much these amazing people have raised for Suicide Awareness and Prevention. Awe struck and humbled. #zacksnyder #afsp.”

The Snyders’ daughter committed suicide during production which led to Snyder taking a leave of absence that ultimately resulted in his dismissal.

Joss Whedon supervised the reshoots and rewrites that created the theatrical cut of the film many are unhappy with.

Deborah Snyder also shared a photo breaking down the progress. Funds are being raised a number of ways that include merchandise sales on top of the signage. 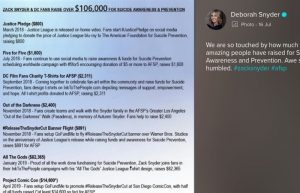 The existence of the Snyder Cut is still debated but it is credible. Zack Snyder has been sharing deleted materials on his Vero for the past year, recently publicizing his design for Darkseid. He’s also been open about his dark plans for a Justice League trilogy.

Ray Porter, the actor chosen for Darkseid, has also thrown his weight behind the Snyder Cut with teases on Twitter.

Cinematographer Fabian Wagner joined in and shared his own images from behind the scenes. One below shows Joe Morton as Silas Stone in an unused sequence. Silas and his son Victor, aka Cyborg, played by Ray Fisher were meant to have more screen time. An entire subplot centering on their family dynamic was cut from the film.

More Behind the scene #JusticeLeague
By Fabian Wagner pic.twitter.com/36vsvyEBM4

A few months ago, Wagner cleared the air on Twitter and answered questions about the Snyder Cut. He wrote if it didn’t exist then Snyder wouldn’t have anything to screen for Warner Bros. executives. Furthermore, there wouldn’t be so much deleted and alternate content.

Superman himself, Henry Cavill, is expected to be at SDCC for The Witcher. Many fans anticipate that he will get asked about the Snyder Cut.

Henry Cavill turning up to SDCC demanding for the #SnyderCut: pic.twitter.com/DTfwqwB1Mc