**Update** Alyssa Wong responded to the allegations that she attacked Stan Lee. She took to Twitter to state, “Hey folks, I’ve been seeing some tweets circulating that are falsely attributed to me. Those are not my words. I have enormous respect for Stan Lee and his legacy, and I wouldn’t be working for Marvel if I didn’t.”

Hey folks, I’ve been seeing some tweets circulating that are falsely attributed to me. Those are not my words. I have enormous respect for Stan Lee and his legacy, and I wouldn’t be working for Marvel if I didn’t.

Wong allegedly wrote, “F*** Stan Lee. So what if he’s dead, he’s still a racist thief and an appropriator of culture just like that jerk Cebulski. If I ever work at Marvel I’ll tear down as much of Stan Lee’s so called legacy as possible.” 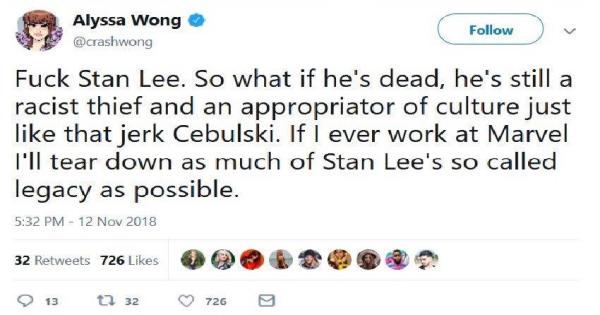 As I reported earlier this week, Wong is one of Marvel Comics’ newest writers working with Greg Pak on Aero as well as working on a number of one shots that crossover with Marvel’s Future Fight mobile game. She appears to have landed the job at Marvel Comics after not only attacking Stan Lee, but after calling current Marvel Comics editor-in-chief C.B. Cebulski a racist.

Marvel Comics is no stranger to hiring creators like Wong. They recently employed Gabby Rivera, who wrote an America Chavez series for them. Rivera would indicate that she was “triggered af at the mere sigh/presence of white dudes.”

Marvel still employees Sana Amanat who previously tweeted, “That’s the future once we start inter-breeding. Brown will rule. Muhahahaha.” She would also tweet, “One day, we will all be brown. (And NO that does not mean I plan to spread shariah law).”

They also employee Saladin Ahmed who pressured Kellogg’s to change their cereal cover box art claiming it was racist. Ahmed has also called for the denial of service to certain individuals. Following Congressman Maxine Water’s call for people to publicly harass other people, Ahmed stated, “denying a person service because they are effectively a neo-Nazi operative is beautiful and moral. It’s not very complicated.”

Marvel also employees Ta-Nehisi Coates who wrote, “White America is a syndicate arrayed to protect its exclusive power to dominate and control our bodies.” He would also describe 9/11 firefighters and police trying to save people, “They were not human to me. Black, white, or whatever, they were menaces of nature; they were the fire, the comet, the storm, which could — with no justification — shatter my body.”

There definitely appears to be a trend at Marvel Comics given the comments of the people they have hired in recent years.

What do you make of Alyssa Wong’s alleged comments? Do you think Marvel will do anything about them?