The Bat Mantle is far from exclusive. Others besides Bruce Wayne have worn the cowl and next year that could happen again. A new rumor is spreading that Bruce will pass the torch, this time to a black Batman.

Bleeding Cool says DC is planning this and the candidate could be a familiar character or someone new. A former Batwing — either pilot David Zavimbe or Luke Fox, Lucius’ son — might inherit the cape. Batwing was introduced as part of the Batman, Inc. initiative when Bruce made a suit with enhanced abilities and weaponry similar to the one in Batman Beyond and handed it down to Zavimbe.

Another strong potential bet that aims high is Black Lightning and he is a choice that makes tremendous sense. He and Batman work side by side in The Outsiders, making the setup easy. Black Lightning is also a major character you can argue is bulletproof and won’t come across as being shoved down readers’ throats. If he becomes Batman he wouldn’t overshadow Bruce Wayne either or vice versa since he has his own identity and following. (Related: Batman Appoints a New Leader of the Bat Family!)

All interesting options but nobody knows for sure. One thing we do know is who it won’t be: Duke Thomas, also known as The Signal, introduced in 2013. According to BC’s source, Thomas is not in line for the cape and cowl even though he was trained by Bruce and teased as the next Robin.

Shadow of the Bat

Multiple individuals have served as Batman when Bruce was either missing in action or down and out. Dick Grayson finally donned the mantle after Darkseid sent Bruce hurtling through time. Thomas Wayne was the Batman of the alternate timeline in Flashpoint. And Jean-Paul Valley took over during Knightfall, Knightquest, and Knightsend in the 90s. (Related: DC Comics Reveals New Batman Villain) 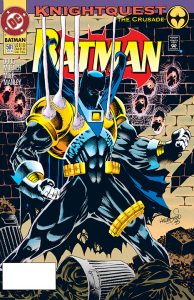 DC got in on the act long ago with John Stewart. Wally West was later revamped as an African-American for television. And black Supermen have been introduced in both Val-Zod and Calvin Ellis albeit in alternate universes. There’s been talk one of them eventually could make a jump into the Extended Universe. (Related: Black Panther Actor Michael B. Jordan Responds to Superman Rumors with Oprah!)

Are you ready for a black Batman? Do you think there is any truth to the rumor? Let us know.