After making a joke regarding the relationship between Rey, Kylo Ren, and Finn in Star Wars: The Rise of Skywalker, Star Wars and Pacific Rim: Uprising star John Boyega faced waves of backlash from fans accusing him of sexism, though the actor refused to give in to the demands of the outrage mob.

On New Year’s Eve, Boyega shared a clip of himself energetically dancing at a New Year’s celebration on his Instagram page with the caption “Stepping into 2020 like”:

In the comments, user heyfabrice joked that Boyega’s enthusiastic dance moves were reflective of “My guy realising that even though Rey is taken, he now has no reason not to date Poe.” It’s a reference to the popular fan pairing of Finn and Poe Dameron.

Joining in on the joke, Boyega responded to the user and stated “It’s not about who she kisses but who eventually lays the pipe. You are a genius.”

This joke prompted outrage from fans, particularly fans of the popular ‘Reylo’ ship between Rey and Kylo Ren, who accused Boyega of sexism and, unable to separate the characters from the actors who portray them, of attacking his Star Wars co-stars: 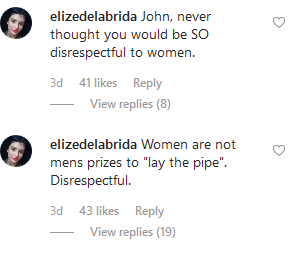 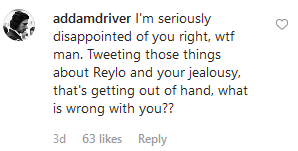 Video game discussion forum ResetERA, notorious for its user’s social justice politics and inability to engage with ideas that differ from their opinions, gave a racist bent to their criticism, with users declaring that Boyega should have “kept his mouth shut and knew his place.” Another added that they were disappointed that he was not “one of the good ones”: 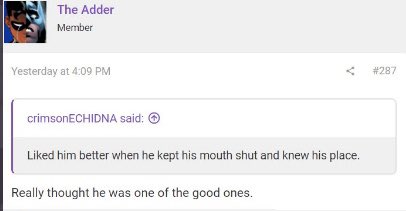 Despite the waves of criticism, Boyega did not bow to the mob and apologize for his joke and instead responded by telling his dissenters that “two consenting adults can lay down whatever the hell they want” and that Daisy Ridley “doesn’t give AF” about Boyega’s humorous reference to a fictional character.

I will say it 500000 times. Two consenting adults can lay down whatever the hell they want ya sensitive!

Daisy knows she isn’t the character. Lol so tbh she doesn’t give AF.

Boyega also took a moment to remind fans that the film was fictional, and did not concern real characters:

Star Wars is a movie not a documentary.

What do you make of Boyega’s response to these fans?