Gene Roddenberry is well known for founding the Star Trek franchise. However, the Roddenberry Foundation was also founded in his name by his son Rod Roddenberry in 2010. The foundation claims “to build on his late father’s legacy and philosophy of inclusion, diversity, and respect for life to drive social change and meaningfully improve the lives of people around the world.”

The Roddenberry Foundation funds the Roddenberry Fellowship, which is “a 12-month program that offers Fellows $50,000 to take an existing initiative to the next level and amplify its impact OR to launch a new initiative.”

The Roddenberry Foundation recently announced their 2020 Fellows and it includes political activist, former Women’s March co-chair, and Bernie Sanders surrogate Linda Sarsour, who has been accused of anti-Semitic behavior for her support of Louis Farrakhan and his Nation of Islam. Sarsour was granted the $50,000 Fellowship for the organization My Muslim Vote.

When we write the history of Islam in America, the Nation of #Islam is an integral part of that history.

“And you do with me as is written, but remember that I have warned you that Allah will punish you. You are wicked deceivers of the American people. You have sucked their blood. You are not real Jews, those of you that are not real Jews. You are the synagogue of Satan, and you have wrapped your tentacles around the U.S. government, and you are deceiving and sending this nation to hell.”

Even President Barack Obama described Farrakhan’s comments as “anti-Semitic” when he denounced them. President Obama stated, “I have been very clear in my denunciation of Minister Farrakhan’s anti-Semitic comments. I think that they are unacceptable and reprehensible. I did not solicit this support.”

Not only has Sarsour been accused of anti-semitism for her support of Farrakhan, but she she recently appeared at the American Muslims for Palestine conference in Chicago where she stated, “Ask them this, how can you be against white supremacy in America and the idea of being in a state based on race and class, but then you support a state like Israel that is based on supremacy, that is built on the idea that Jews are supreme to everyone else.”

Sarsour would claim her comments were about a recently passed law in Israel.

Over the weekend, I made comments about Israel that require context to understand. I was specifically referring to the racist argument at the heart of the nation-state law recently passed by the Israeli government – not the Jewish people. I apologize for the confusion.

The amount of hate in Linda Sarsour’s latest diatribe is shocking. She slanders the founders of Israel as supremacists, invoking a centuries-old anti-Semitic trope when she describes them as having believed that Jews are “supreme to everybody else.” https://t.co/AYCnFKXzu4

Sarsour’s relationship with Farrakhan and her own statements also saw her accused alongside fellow Women’s March co-chair Tamika Mallory of anti-Semitism. The accusations led to Mallory, Sarsour, and Bob Bland stepping down from the organization’s board in July 2019.

Former President of the DC chapter of Women’s March Mercy Morganfield accused Sarsour of anti-Semitism, but also indicated she was mismanaging funds. Morganfield stated, “They are not only non-inclusive of certain segments of women but Tamika and Linda have betrayed all women by their subservience to radical religious beliefs that do not believe in equal rights for women.”

Women’s March founder Teresa Shook also accused Bland, Mallory, Sarsour, and Carmen Perez of allowing “anti-Semitism, anti-LGBTQIA sentiment, and hateful, racist rhetoric to become a part of the platform by their refusal to separate themselves from groups that espouse these racist hateful beliefs.” 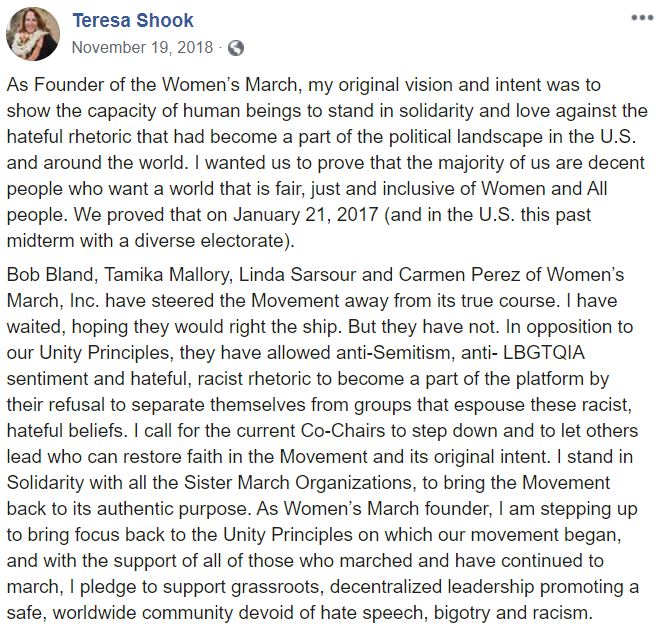 Linda Sarsour isn’t the only questionable fellow to receive a fellowship from the Roddenberry Foundation. The Foundation also gave a Fellowship to Charlene Carruthers for the Chicago Center for Leadership and Transformation. Carruthers also routinely praised Farrakhan. In 2010, she described him as “wise and selfless.”

Min. Farrakhan took a particular approach. I respect that and I think he was being wise and selfless. #WeCount

Although she has noted she also doesn’t agree with everything Farrkhan says.

@LeAaronFoley He’s right about the need for land ownership. I may not agree with everything Min. Farrakhan says, but I do with some.

The Roddenberry Fellowship also chose Alia Salem as a 2019 Fellow for her Facing Abuse in Community Environments organization. Salem was the former Executive Director for the Dallas Fort Worth Chapter of CAIR, the Council on American Islamic Relations.

CAIR’s co-founder and former chairman of the board Omar Ahmad stated, “Islam isn’t in America to be equal to any other faith, but to become dominant. The Koran, the Muslim book of scripture, should be the highest authority in America, and Islam the only accepted religion on Earth.”

This shift towards giving money to radical political activists was intentional. Roddenberry Foundation CEO Lior Ipp told Fast Company in December 2017 it was a direct reaction to the election of President Donald Trump, “The board got together after the election and we felt that we couldn’t continue with business as usual.” Ipp continued, “We are still looking for bold ideas and creative solutions, but this is a pivot for us to invest in activists and activism.”

With this pivot, the Foundation awarded Alicia Nieves a Fellowship for her Streetwide project. Fast Company describes the software as a “mobile app to help immigrant communities to protect themselves during ICE raids.”

Given the board’s stated change in direction it’s no surprise to see that radicals such as Sarsour be awarded the Roddenberry Fellowship.

This is a drastic departure from what Gene Roddenberry originally envisioned, the idea of a future where humanity grew out of its tribalism, which would become essential to Star Trek.

But given the current course of the Roddenberry Foundation it looks like Gene Roddenberry’s legacy will be tainted with the funding of radicals who are directly opposed to the vision he shared with us in Star Trek.