More talk of Batman spinoffs, whether they tie in or not, is making the rounds online. Ever since Joker’s success, Warner Bros. is speculated as wanting to duplicate that with another bad guy.

We Got This Covered is saying Warner “is keen on giving” Bane his own standalone feature and they add the jacked-up mastermind would be played by a Latino.

An actor the site claims is being contemplated is Pedro Pascal, star of The Mandalorian and Wonder Woman 1984, who was born in Chile. His commitments – and clearly the fact he is already playing DC villain Maxwell Lord – could create conflict there so unnamed others are on the list too. 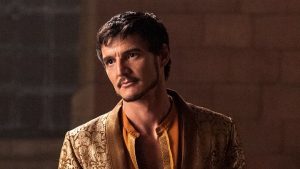 Pedro Pascal as Oberyn Martell in “Game of Thrones” – HBO

WGTC notes an implication for WW84 if Pascal is cast for Bane. Max Lord might not make it out of the adventure alive which is contradicted by Reddit spoilers we reported.

For that to be a concern, the Bane movie has to connect to Patty Jenkins’ and Gal Gadot’s continuity. That’s most unlikely if WB wants to follow the same contained path as Joker.

Pascal is also rumored for Disney Plus’s Moon Knight and Kraven the Hunter. It would be interesting enough if he got either or both of those. He’d become one of the select few who have their feet planted in both the Marvel and DC multiverse.

He could spend most of his time under a mask, like Tom Hardy in Dark Knight Rises, to mitigate any confusion although it’s not as if we haven’t seen the same actor in two different parts before, no less in the same production.

Brandon Routh was face to face with himself as Superman and The Atom in Crisis on Infinite Earths and their spitting-image resemblance was touched on openly.

Dave Bautista is one more potential choice with all the fan art of the Drax actor as Bane out there. Big Dave was at the WB lot recently and may have had a meeting about the part. We don’t know for sure.

It won’t come to you so get after it!! #DreamChaser pic.twitter.com/FPTUbfLfTh

Bautista is not Latino so that might rule him out – at least in this case. His background is Greek and Filipino if you’re keeping score.

A good friend of James Gunn, he could turn up in The Suicide Squad as a different Bane or someone else. The chances are slim but anything can happen.

Bane isn’t the only Batman rogue mooted for a solo film. We previously reported a rumor from WGTC that Two-Face is being considered for one standing separate from the DC Extended Universe as well. Other villain-centered spinoffs could follow.

Do you want a movie about the man who broke the Bat? Tell us below.