Runescape developer Jagex released patched notes this past Monday highlighting a heap of changes. Among those changes was an entire section labeled “Diversity Improvements.”

In this “Diversity Improvements” section Jagex explains they will be removing the word “Gypsy” from the game because it “could be interpreted as a racial slur.”

They are also changing NPC names in Karamja to give them “more appropriate titles.”

Other NPCs in the Kharidian Desert “had their name changed from ‘Ali’ to better reflect the diverse variety of names we see in real life.”

They also detailed that “some dialogue in the Kindred Spirits quest has been altered to remove unintended offense.”

You can see a screenshot of the “Diversity Improvements” section below: 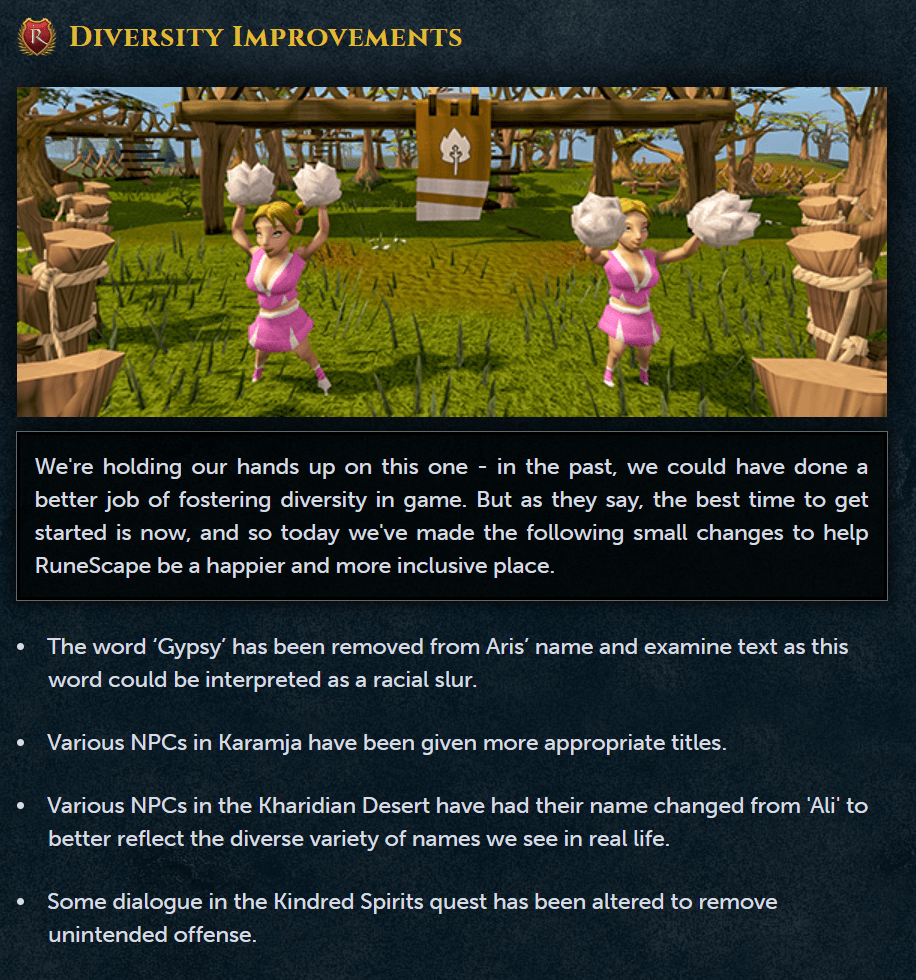 Jagex explains the reason for these changes is to do “a better job of fostering diversity in game.”

While Jagex did not detail what the changes to the NPC names would be, Reddit user VapeNationKleiner detailed that they changed ‘A primitive warrior’ to ‘A skilled warrior.’ Other changes include ‘Jungle savage’ to ‘Jungle dweller,’ and ‘An aggressive native of the Kharazi Jungle’ to ‘A native of the Kharazi jungle.’

Related: Dead or Alive 6 Will Not Feature Sexy Transformation for Phase 4’s Nights of Azure Costume

As noted in the changes, they also changed a number of citizens who were named Ali. This change actually goes against their established canon. The citizens changed their names to Ali in order to try and inherit the fortune of the mayor of Pollnivneach.

The established lore had nothing to do with racism or lack of diversity, but instead the greed of a particular set of people hoping to get their hands on someone’s inheritance.

Fans on the Runescape subreddit are already mocking the changes with one of the more popular posts titled “Last Ali standing.”

While these changes might appease people in the social justice community they rarely bring in new customers or even allow customers to keep their current customers.

What do you make of Runescape’s “Diversity Improvements?”