There was the tease at the end of Godzilla: King of the Monsters and we addressed the theory recently King Ghidorah’s severed third head may increase the strength, and potentially size, of Kong. But we still have to wonder if a restored Monster Zero makes an appearance in Godzilla vs. Kong.

Covering the growing conjecture, YouTube channel DangerVille’s “sources say yes” based on a clip described in an unreleased trailer seen by a select few about a year ago.

Below is the video of DangerVille’s update.

It was speculated the first trailer for Godzilla vs. Kong – which still could see another delay – would drop in May. While that didn’t happen, a trailer was cut together (possibly before reshoots and the allegedly “disastrous” test screening) and shown “behind closed doors” at the Cinema Expo 2019.

The infamous clip of Kong punching Godzilla on the deck of an aircraft carrier – the same snippet that leaked from Comic-Con Experience Brazil – was also reportedly seen at Cinema Expo.

According to the description passed along by DangerVille’s source, Ghidorah returns to where he started in KOTM, Antarctica, chained to a wall in a glacial temple or some type of facility. He’s surrounded by armed guards that might work for eco-terrorist Alan Jonah. His condition resembles Frankenstein’s monster and his temperament is zombie-like as he regenerates.

DangerVille’s Alastair guesses Jonah is conducting experiments with electricity to stimulate the regrowth of either the head he bought or remnants of Ghidorah’s body melted by Godzilla in Boston. Likewise, he posits the technology for restoring the beast was invented by Monarch. News clippings prove the organization has tried to create their own Titans before.

Monarch also may be constructing Mechagodzilla, a killing machine that spoilers say will be fodder for Godzilla and Kong in the upcoming film. A rival outfit named Apex is believed to take control of the robot to further its mission to destroy the Titans. 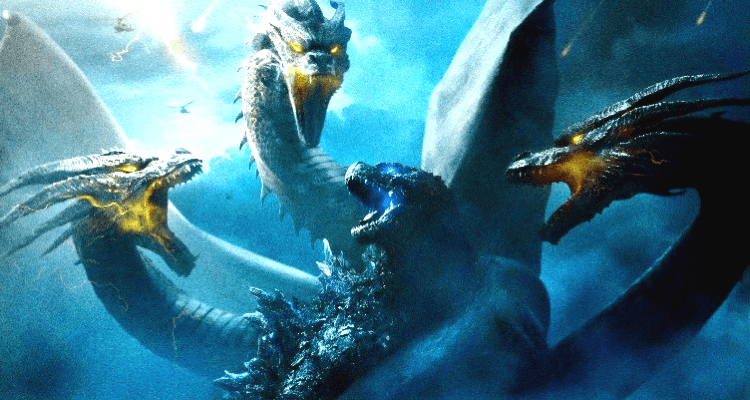 Alastair further theorizes parts from the destroyed Mechagodzilla may be used to transform the ailing Titan fallen from the stars “into the infamous Mecha-King Ghidorah.” He contends it’s unlikely Mechagodzilla will be enough of a threat against the two heavyweight monsters to carry an entire movie (in modern times, I suppose).

Alastair said he predicted Mecha-King Ghidorah was inevitable when he saw the end-credit scene of KOTM (I overheard the same prediction at the showing of the film I attended for my review). He believes an appearance by the upgraded Monster Zero is the payoff to that tease.

It’s also possible Ghidorah or a mechanized variation of him could appear in a later MonsterVerse installment that hopefully gets made.

An icon of Godzilla canon, King Ghidorah has taken part in every generation of Godzilla films up to the present. The three-headed terror flies down and, puffing out his chest, poses a world-ending or kaiju-killing threat only to be soundly defeated, often with a little teamwork.

Godzilla vs. Kong is rated PG-13 and set for a November release unless a change is made in light of movie theaters being closed everywhere.