Dungeons & Dragons recently called on fans to take a survey to help them shape their future products. They also stated they wanted to especially “hear from fans who may have been underrepresented historically.”

They made the call for fans to take the survey on Twitter.

Dungeons & Dragons wrote, “Help shape future #DnD products by taking this survey! Tell us about the reasons you play/DM and the tools that could help you in your play. We’d especially like to hear from fans who may have been underrepresented historically. Take the survey now: spr.ly/6018GiysI.” 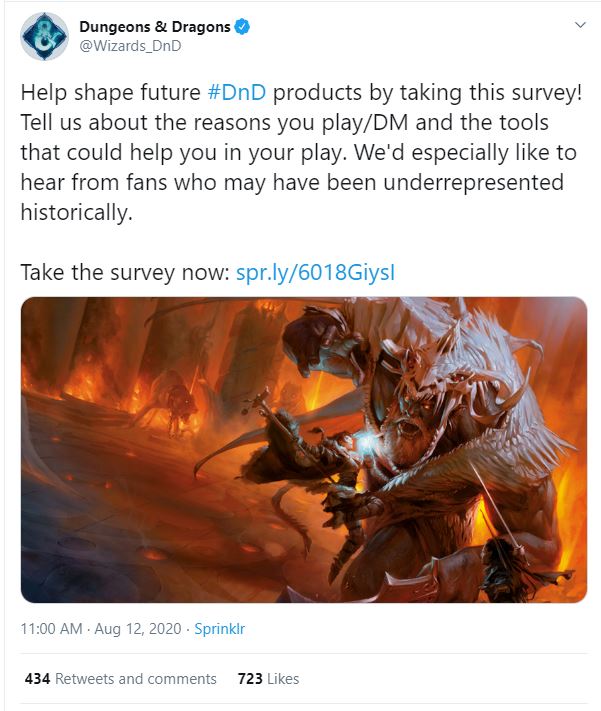 Not only did they announce changes for the future of games, but they also added trigger warnings for their older products.

The actual survey begins by asking individuals if they have ever played Dungeons & Dragons.

If you select “no” the survey ends.

If you select “yes,” it then leads to about three dozen questions regarding your habits with Dungeons & Dragons from when you first started playing to which editions you have played.

Still, other questions ask how you prepare for a D&D game and whether or not you use any digital aids like character builder.

It also asks where you play D&D at and how the current pandemic and government mandated shutdowns have affected your play.

Finally, the last set of questions asks your gender, age, and racial or ethnic heritage. 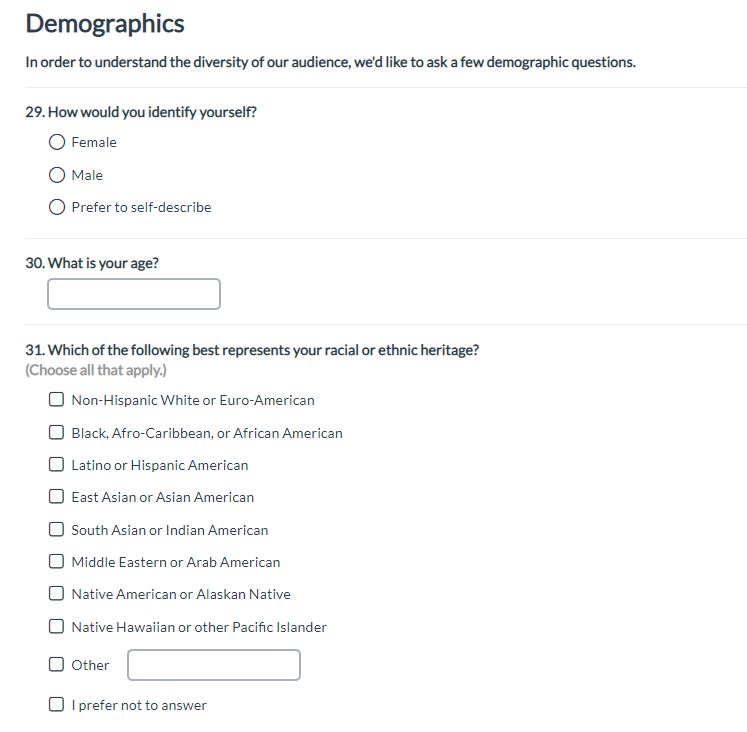 D&D fans responded to the survey with a variety of opinions.

Another added, “‘We’d especially like to hear from fans who may have been underrepresented historically.’ As if you haven’t catered to them already. Is my word worth less, as a life long ‘nerd’ or ‘geek’?” 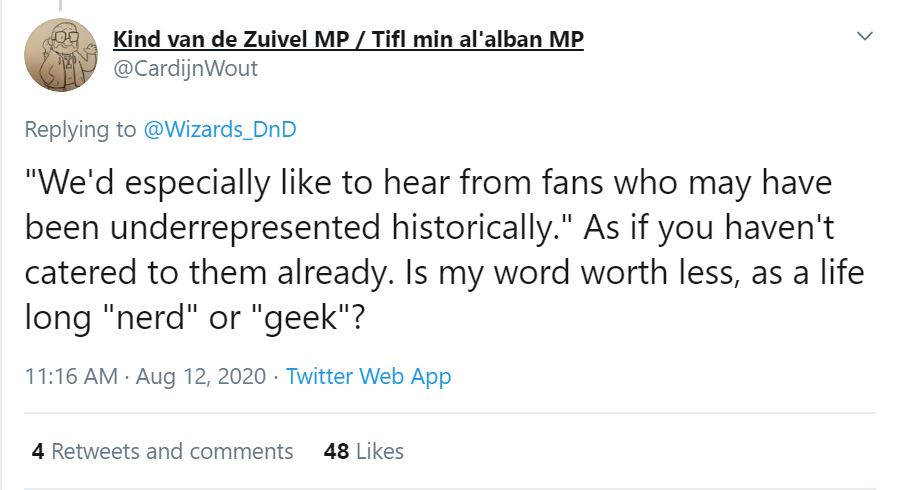 Sarah Sorensen wrote, “As a new DM I would like more resources to create homebrew campaigns. As far as your published campaigns I’d like to see more that dont start at lv 1 so players can continue with their characters and reach higher levels.” 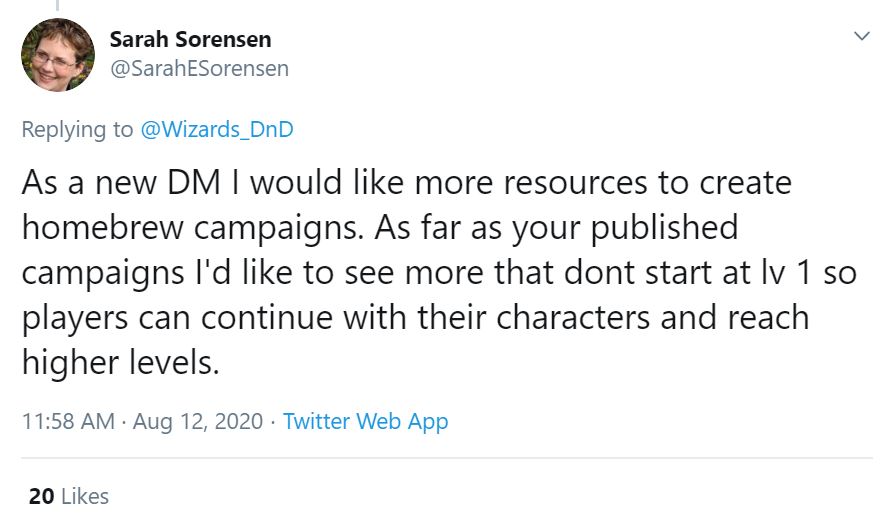 Another wrote, “Done ! ps : It’s ok to use the word “Race”. As many books, many video games and many other medium use it since the beginning of time & it never bothered anyone.” 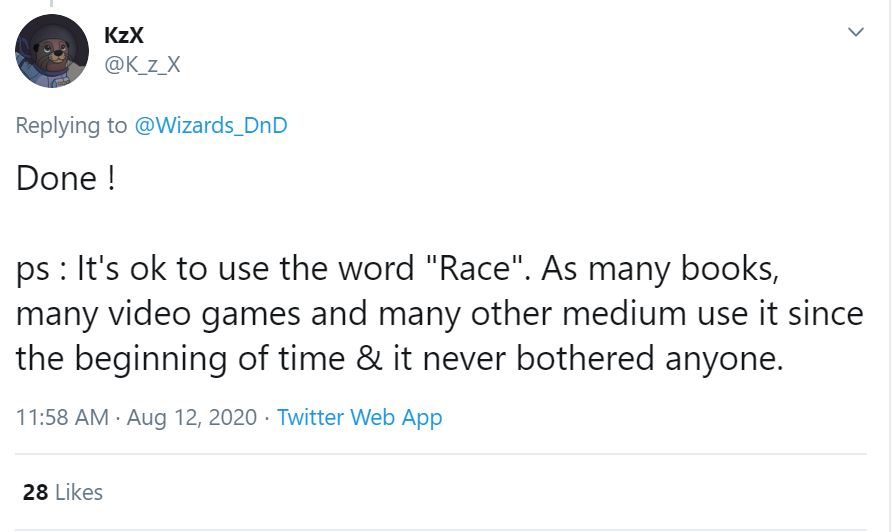 Twitter user Fruhmann1 wrote, “Everyone else is upset but I’m not. It’s nice of you guys to let people know that the even Editions will suck and the odd ones will be good.” 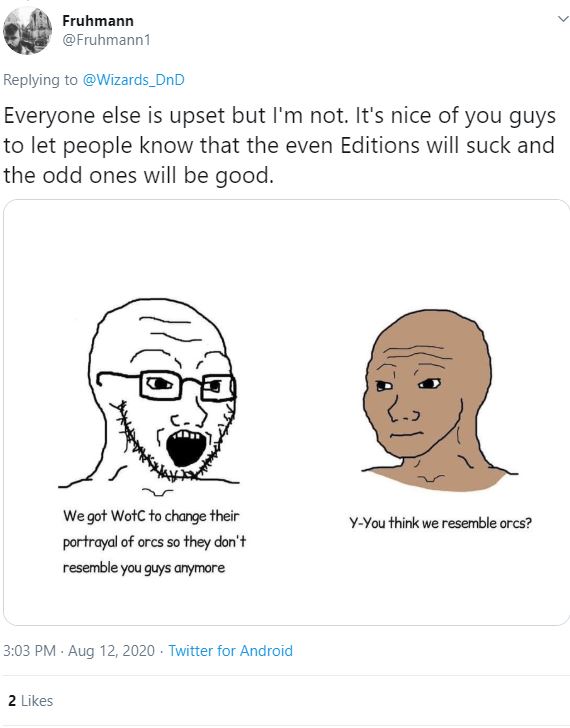 Twitter user FortIronhold add their thoughts writing, “Most veteran gamers make it a point to talk to their fellow players and DMs when they start playing. Not only does this get the members of the group introduced to each other it also allows them to feel out what sort of content everyone’s up for.” 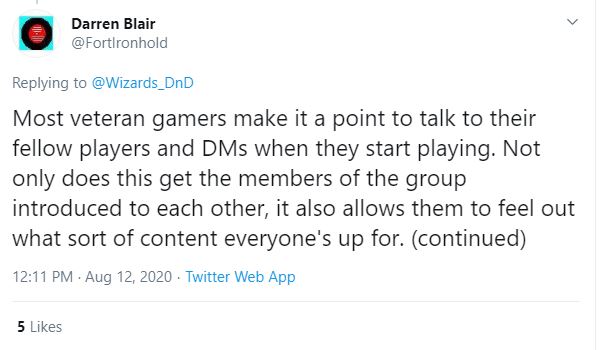 They added, As a consequence of this, things like ‘consent forms’, ‘diversity readers’, and other such hallmarks of ‘woke’ gaming just aren’t necessary in a healthy and properly functioning group that has a veteran player or two in it. If anything, they’re merely annoying people.” 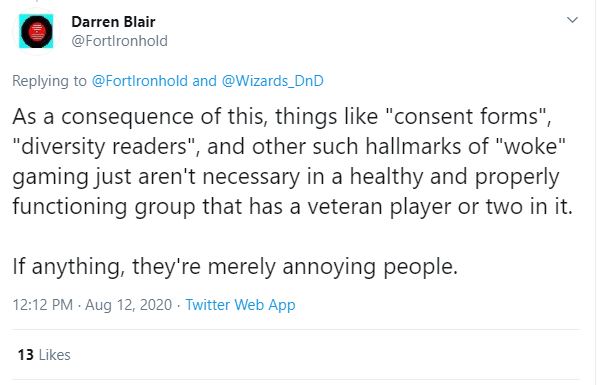 Finally, they concluded, “This is a situation where the cross-generational appeal of the game can be used to its advantage. If you *really* want to do something to keep the game going, find ways to help new players connect with veterans who can guide them into the game.” 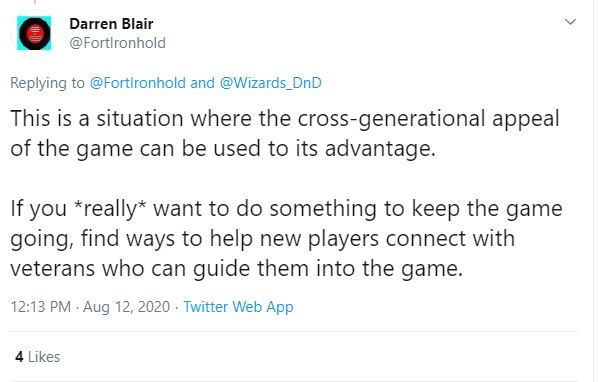 Squatch XXL wrote, “I will continue to use the term ‘Race’ while playing D&D. I don’t care who cries about it, and honestly I think this is a good way to separate subversive crybabies from people who want to have fun. DM makes the rules, not woke dice rollers. 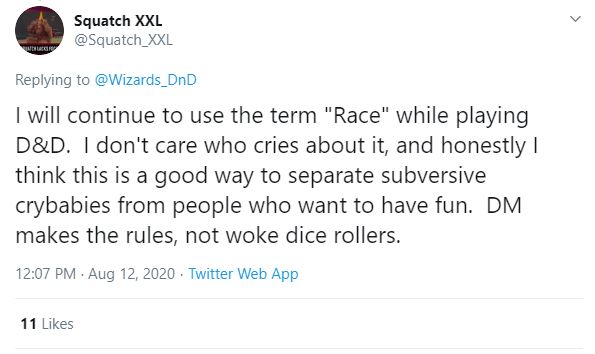 Some took issue with the survey questions.

Cambion Black wrote, “Issue with survey. I don’t play virtually, but it asked me how often I used very tools so I had to answer ‘never’ to all of them. Might skew the data of enough people have to do that.” 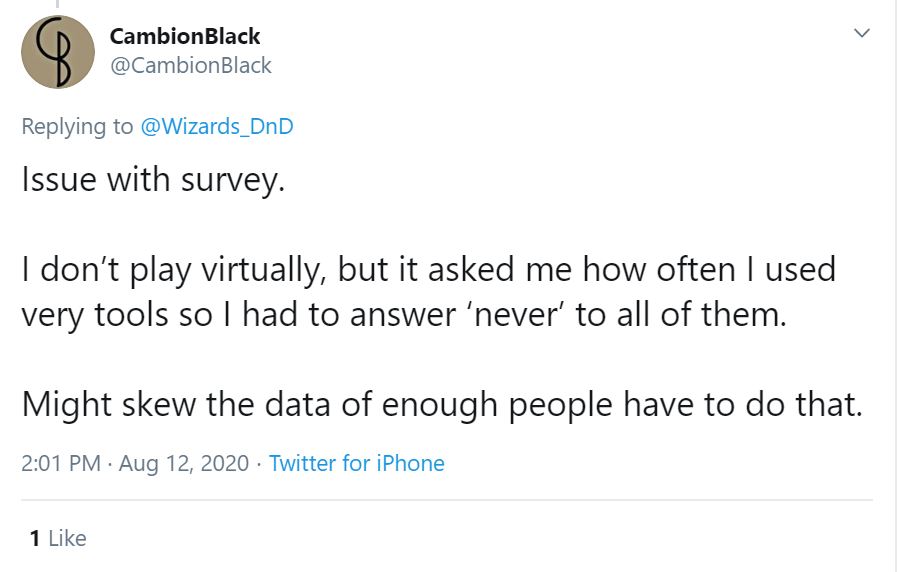 Twitter user SoraKell wrote, “Many of these questions seemed entirely biased and front-loaded. The demographic options were particularly limiting.”

Holden Shearer wrote, “Can’t help but notice Mike Mearls was left off the list of designers a person might recognize, and whose presence might cause someone to be more or less inclined to buy a product.” 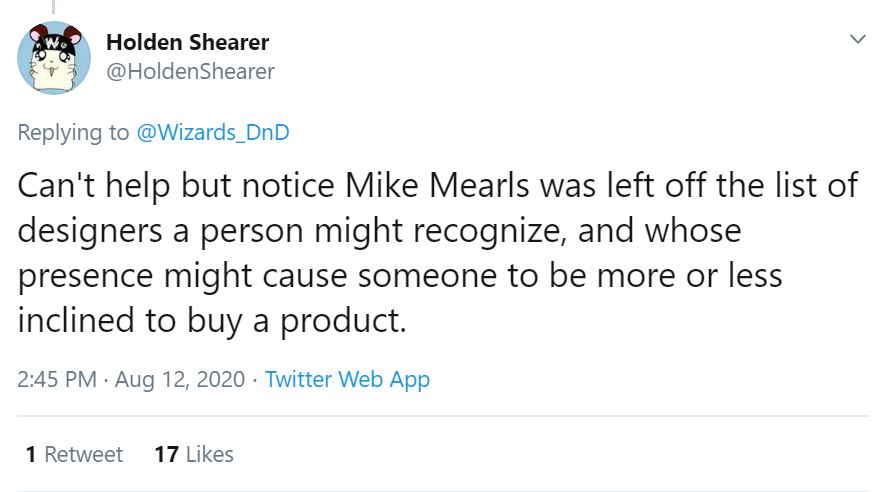 ChaosOs added, “Hi, I completed the survey, but two things stuck out to me -Keith Baker wasn’t listed in the designers at the end – The Dungeon Masters Guild wasn’t discussed despite it seeming like an important part of how wotc sells D&D? 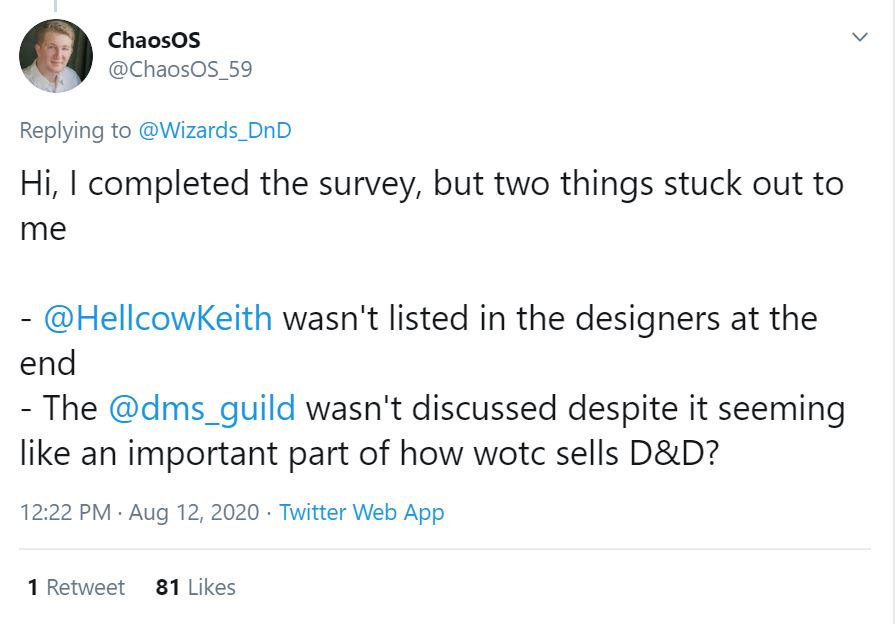 Laura McLeod stated, “Interesting to fill in, but it felt weird being told the last couple of questions were to understand diversity, then only being asked gender and age… surely more than that matters?” 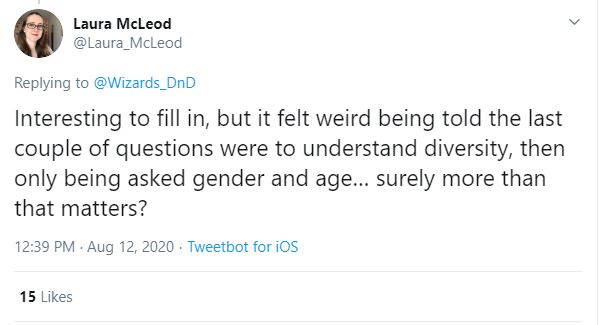 And A. Kelly Lane added, “Some survey feedback. If you’re really interested in the voiced of underrepresented groups, then your demographic section (needs to be longer) should really be collecting that data AND there should be more long answer options for open feedback in case your questions are not good.” 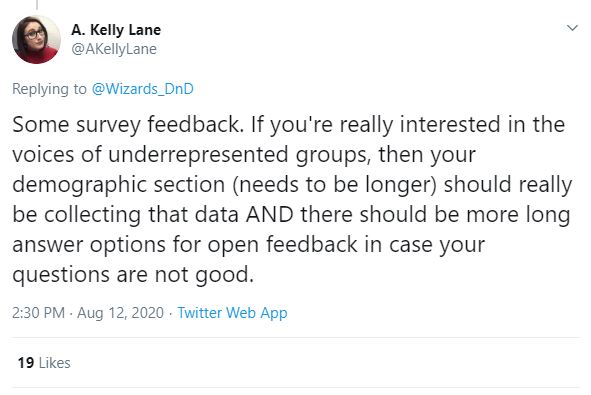 What do you make of Dungeons & Dragons survey and their specific request for asking “to hear from fans who may have been underrepresented historically?”