In his call for unionization, he also criticized current corporate culture that he claims benefits executives over the work of laborers.

Sitterson took to Twitter where he began stating, “I’ve seen lots of passive talk implying the DC layoffs were some unavoidable act of God. But thats not true. A group of executives decided that after profiting off people’s labor for years, they’d profit somewhat more by kicking them to the curb during a global pandemic.”

He continued, “Don’t let your love for DC creators or books or dream of working on Batman obscure the fact that the layoffs were decisions made by people so rich they’ll never have to worry about rent or health insurance, all to protect THEIR profits.” 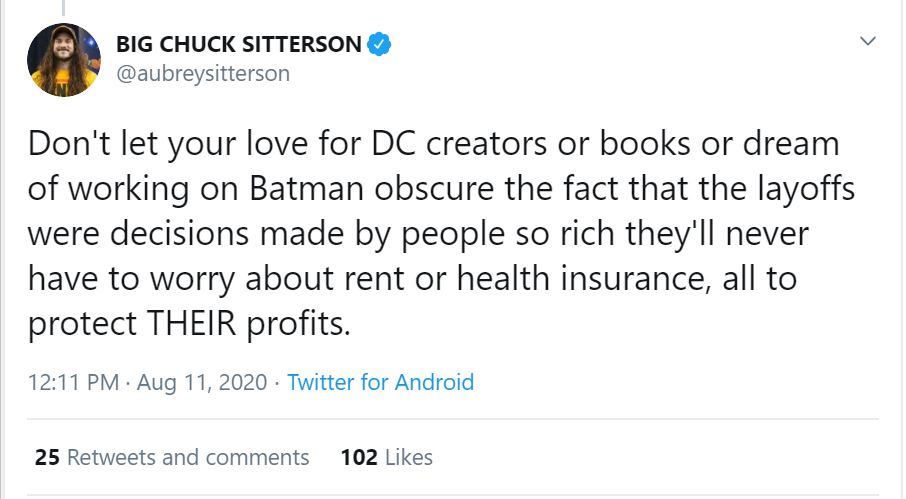 He then issued a call for a comics union. He wrote, “Love of the medium, the work, the people, the characters is weaponized against comic book professionals at every level of this exploitive industry. All to fill the pockets of board members at the world’s biggest media companies. We need a comics union, now more than ever.” 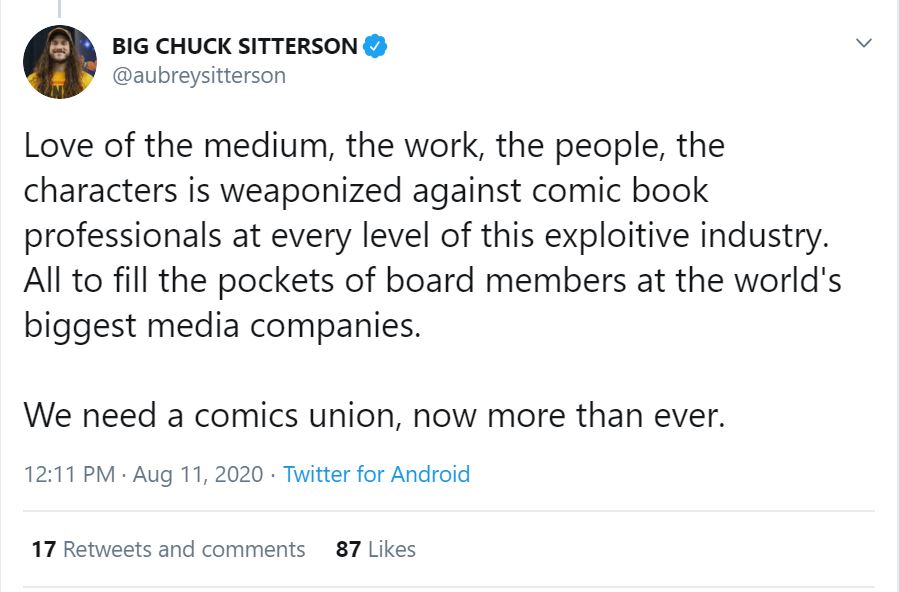 Not only did he call for a comics union, but he also called for a comics guild stating that comic book freelancers do not have job security, have no ownership of the stories they write, and do not receive benefits.

Sitterson explained, “We need a comics union AND a comics guild. Freelancers are subjected to even worse than this, with no benefits or job security of any kind, and more often than not, no ownership over – or even participation in – anything they create.” 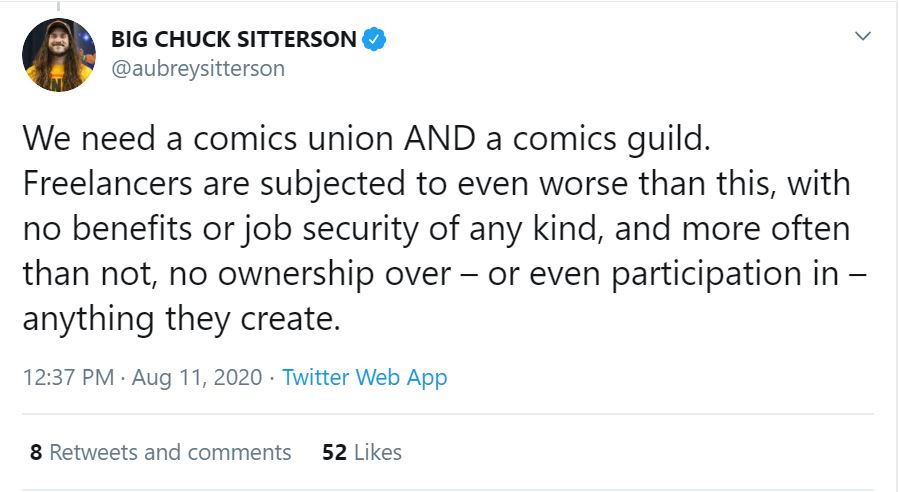 Sitterson’s call for unionization and the creation of a guild was met with a number of mixed reactions.

One user responded, “I’m on the Right. I think unions are a natural part of the free market. A billionaire exerts a lot of influence. A million workers should be able to pool resources & exert as much influence. I wish you luck & hope this union will be loyal to workers regardless of political views.” 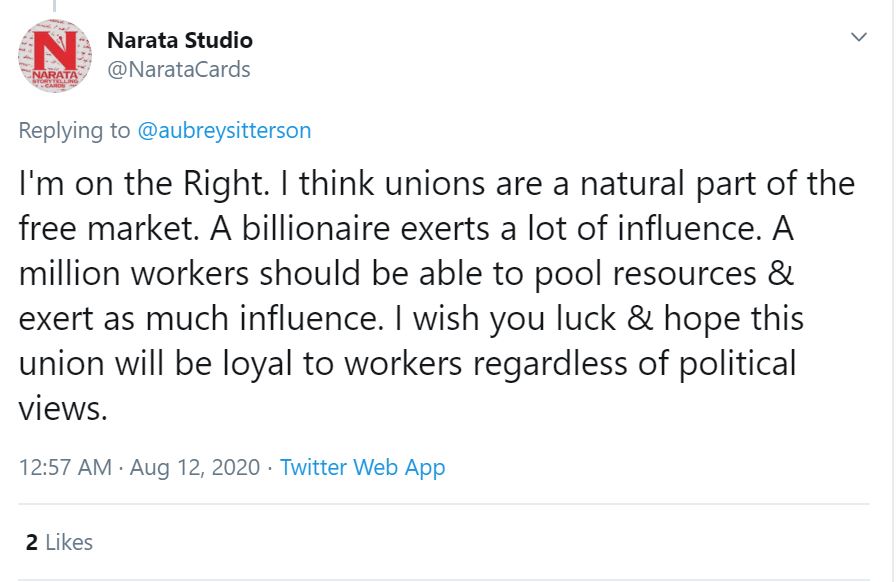 Many responded to Sitterson noting that it was too late to unionize given the current state of the comic book industry that continues to post declining sales numbers year after year.

Saeger Ryman responded, “It’s going to be kind of tough to set up a union in an industry in the midst of slaughter, when there are few jobs to fight over in the first place by people who have little real value or clout. Even if you’re pro-union, it’s too late. It would be as well to unionize Blockbuster.” 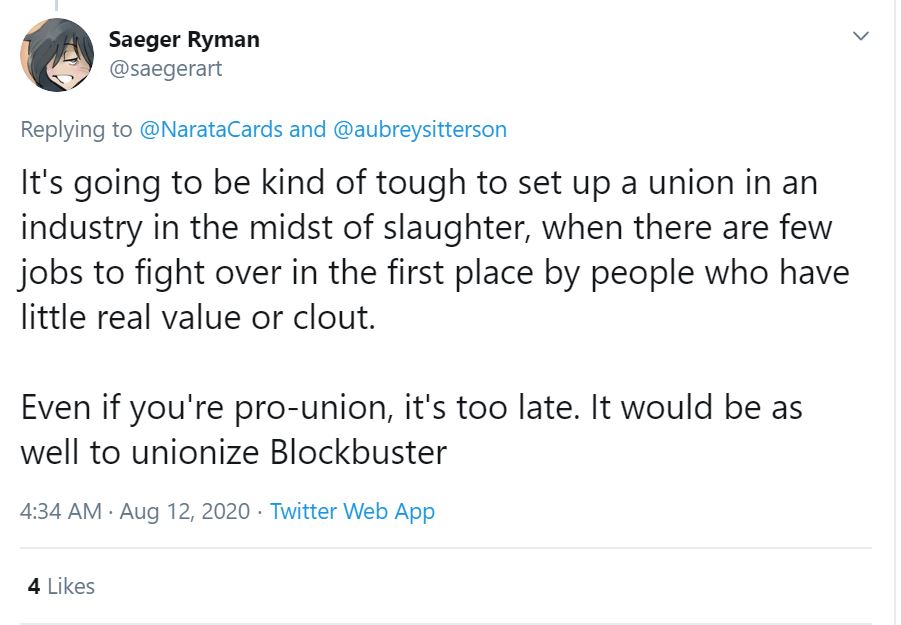 Lord Tazzman added, “Nice sentiment but about two decades too late to unionize. Comic labor is not in a position of strength in which to leverage any power. They were in the mid to late 90s but not now, not under a larger conglomerate willing to cut them off.”

Godot also responded, “You don’t have any leverage to push for higher wages or more benefits when the comic industry is hurting as bad as it is The money isn’t there, management is better off liquidating the assets and shutting down than giving you a raise.” 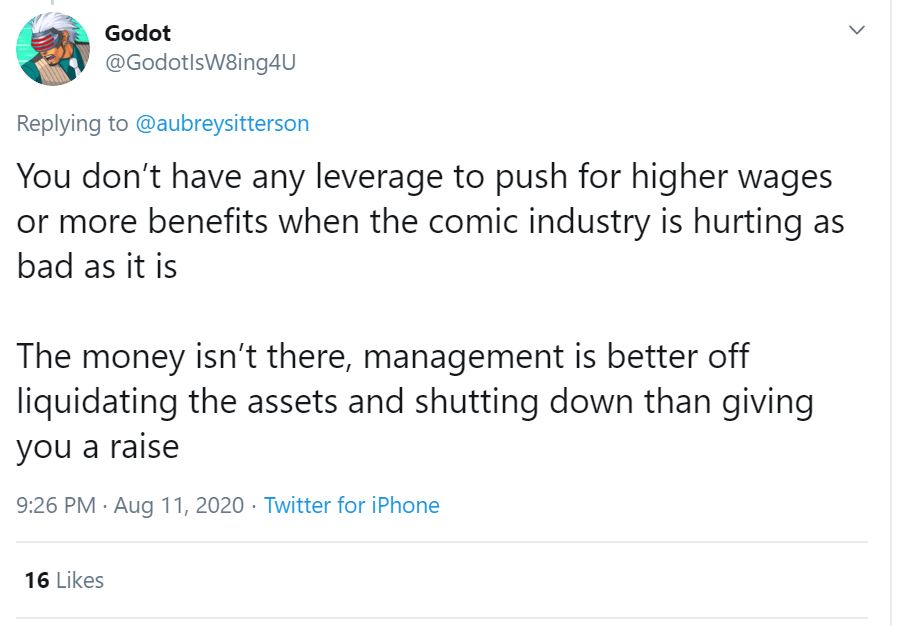 Michael Fairfax would state, “The time to do that was around the time Image comics was founded in the early 90’s the comics industry isn’t it the shape to do that.”

Reginald P. Smythington-Bear also stated, “In order to unionize successfully, comics “professionals” would need to convincingly demonstrate that their services were indispensable ones… or, at barest minimum, capable of generating substantial profits. Current DC/Marvel sales figures do not support either of these.” 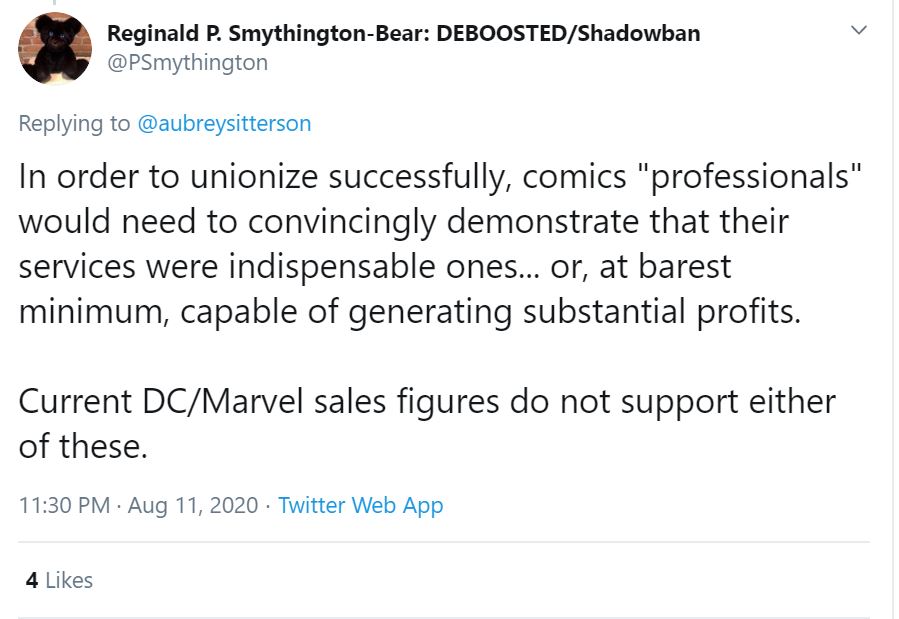 He stated, “You come over here and it is depressing as hell. The shops are closed. Diamond has a monopoly. You have overpriced pamphlets. You’ve got creators out there on social media running at the damn mouth, constantly getting into fights. You’ve got whisper networks of people trying to keep other people out of the comic book industry entirely because they don’t like them because it is all about politics now.”

He continued, “It’s not even about making product. They are not even in a business anymore. It’s just about keeping certain people they don’t like out of there lunch table effectively.”

Related: DC Comics And Batman Artist Neal Adams Tells White People “Try To Not Be ‘White’ In Your Heads!”

He later adds, “We’ve got all the dirt coming up now of all the people working in comics that are doing naughty things supposedly. We are canceling people every other day. You don’t hear about this kind of drama in Japan. I’m not saying it doesn’t happen. But it does seem in Japan they are focused on telling good stories, making comics literally for everybody…”

Kneon then states, “We have a lot of political minded people coming into comics and using the comic book characters as mouthpieces for their own politics, their own depressing politics. Most American comics, now, are depressing as hell.”

What do you make of Sitterson’s call for unionization and the creation of a guild? Do you agree with him?