DC Comics author Scott Snyder and artist Tony Daniel have hired Camilla Zhang, a radical anti-police advocate who also appears to have a history of discriminating against white people, to run their recently launched KickStarter campaign for Nocternal.

Zhang would also confirm it on Twitter writing, “Hey there! I’m Scott & Tony’s campaign manager & am helping them field questions. We’re shipping worldwide thru Backerkit. Shipping will be charged separately through Backerkit after the campaign is over. Does this help clarify things? Lmk if you have further questions.” 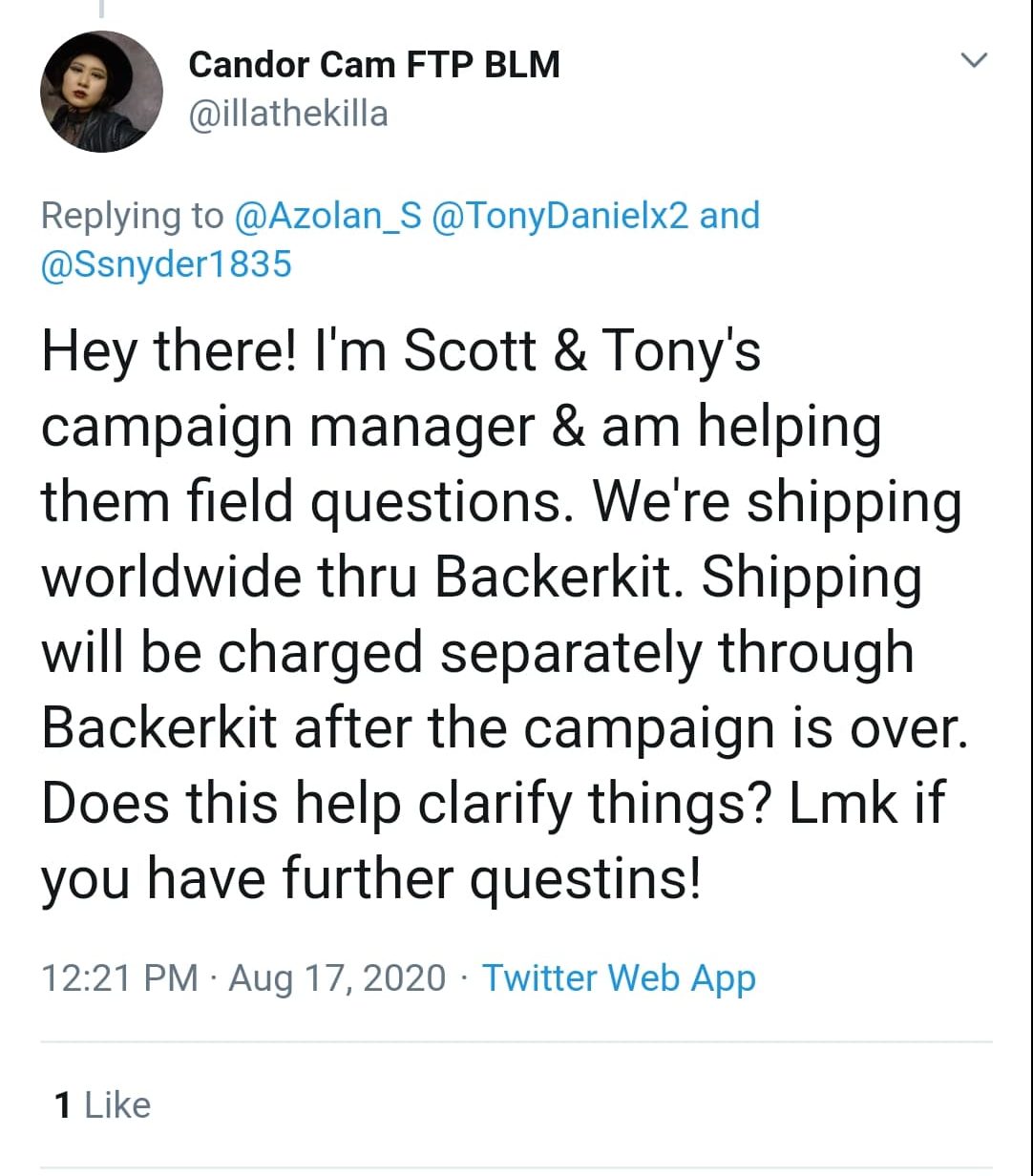 Zhang was previously the Outreach Lead at Kickstarter, but was laid off when the company downsized their workforce by as much as 40-45% according to ComicsBeat.

Before working at Kickstarter she was an editor at DC Comics working primarily on Before Watchmen. SHe also worked on a number of Batman titles including Batman: Noël, Batman: Black and White, Batman: Death by Design, Batman: Harley Quin, and Batman: Harley and Ivy. 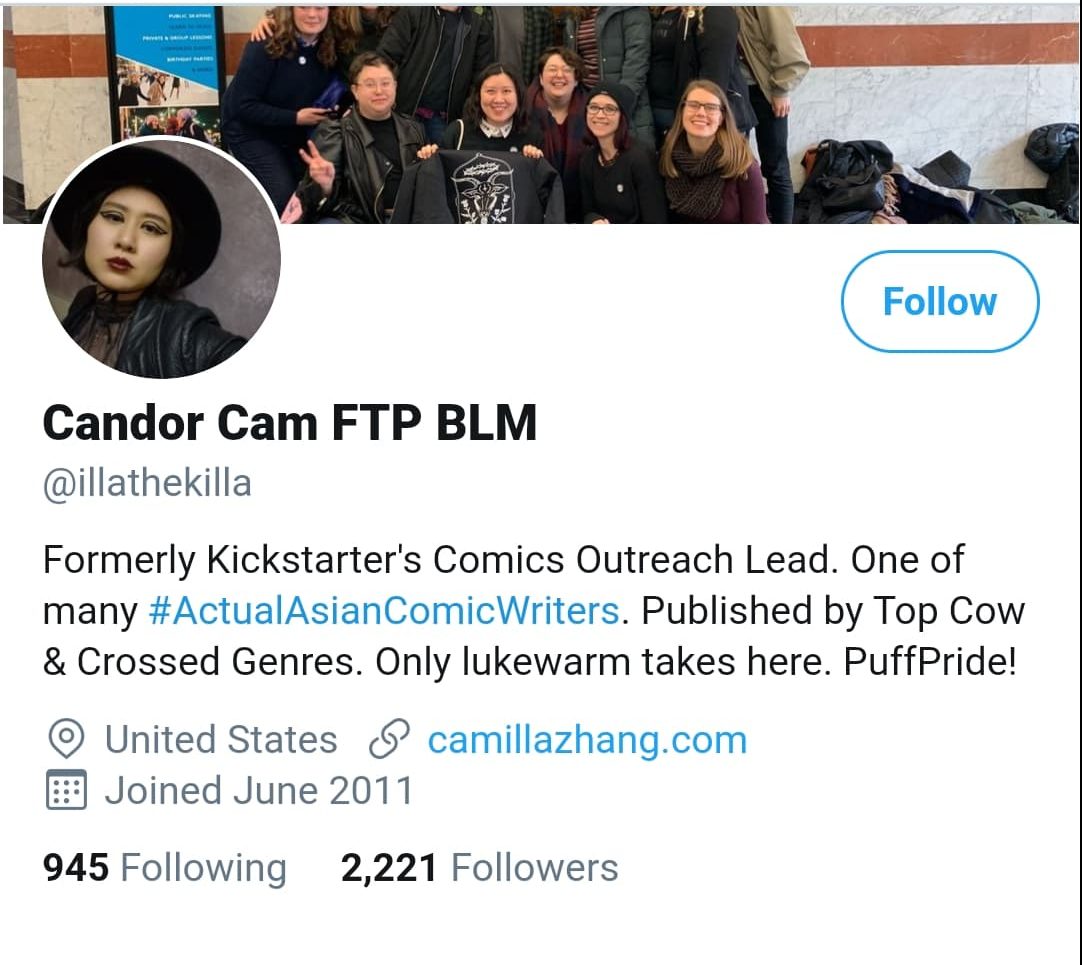 As you can see in the above the screen shot Zhang’s title on Twitter is “Candor Cam FTP BLM.” The FTP is an acronym for f*** the police.

Related: Is Batman Really A Metahuman – Scott Snyder Weighs In

BLM stands for Black Lives Matter and the organization’s co-founder describes them as “trained Marxists.”

Not only that, but the organization also advocates “to dismantle cisgender privilege and uplift Black trans folk, especially Black trans women who continue to be disproportionately impacted by trans-antagonistic violence.”

They also want to “disrupt the Western-prescribed nuclear family structure requirement by supporting each other as extended families and “villages” that collectively care for one another, especially our children, to the degree that mothers, parents, and children are comfortable.”

Zhang’s radical position towards police has seen her advocate for the abolishment of the police.

In July, she wrote, “A reminder that to #AbolishPolice #DefundThePolice we must fight against police unions (which r only union in name). In addition to protesting & direct action, we must demand that our city councils & state legislatures develop non-police solution to protect ppl, not property.” 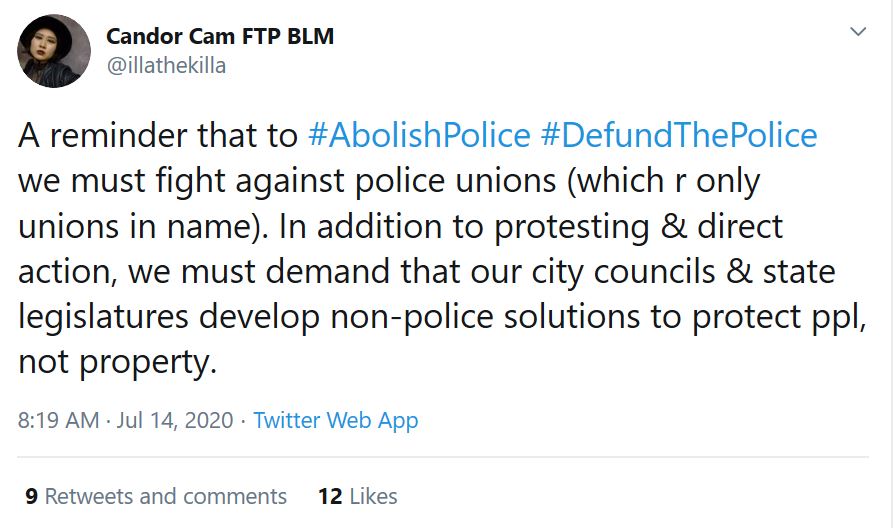 She would later call on the AFL-CIO “to expel the International Union of Police Associations (IUPA) and demand AFL-CIO affiliates with partial law enforcement membership terminate their relationship with unionized police and correctional officers.” 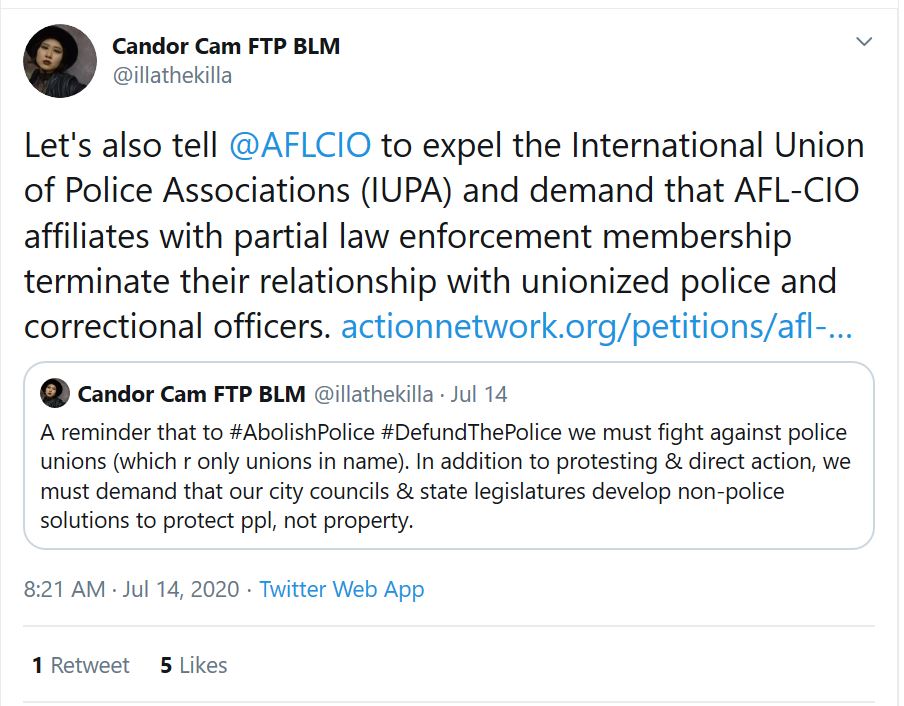 Based on her Twitter feed it appears she’s been protesting against police since at least 2016 where she posted a video at a Black Lives Matter protest.

No justice, no peace. No racist police #blacklivesmatter pic.twitter.com/uuUbcyKwOt

Not only is Zhang against the police, but she has described the National Rifle Association (NRA) as a “powerful white patriarchal supremacist organization.” 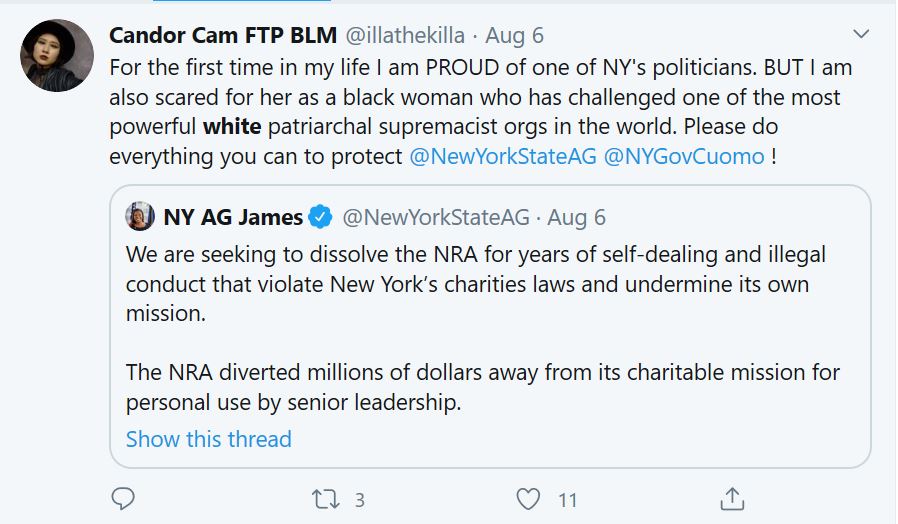 She also appears to take issue with white women. In 2019 she wrote, “Beware of White femme fragility.”

Not only that, but it appears she has actively discriminated against white people in the past.

She wrote in July 2019, “When selecting panelists for Blue Stockings comics fest, I was REALLY grateful to see that someone had specified that they were White in their bio. It made it easier for me to identify QPoC I wanted to spotlight. Unless specified, White is the default race, in fiction & in life.” 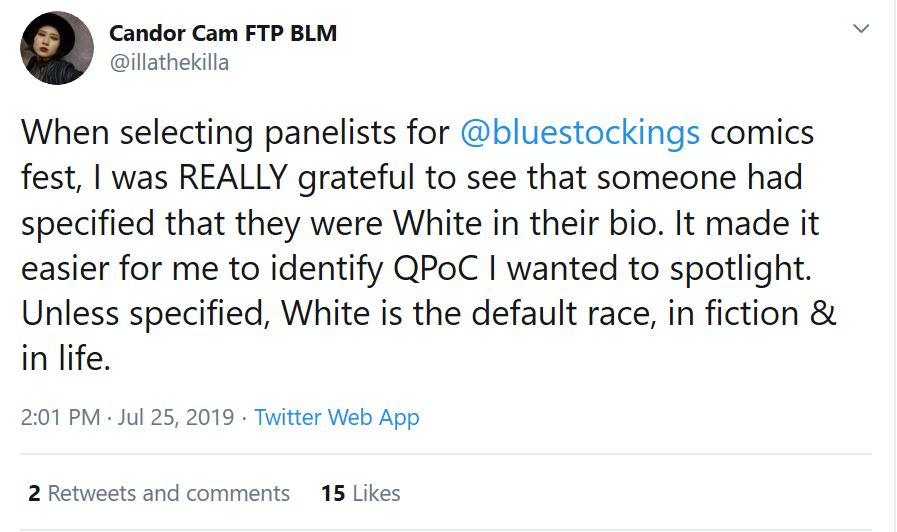 Zhang also claims that the culture of the United States of America is a “heteronormative patriarchal white supremacist culture.”

She wrote in May 2019, ““Ownership” Are we just talking abt Steward & Reed? Just bc PoC are owners doesn’t mean they are immune to the heteronormative patriarchal white supremacist culture that we only recently started unpacking. We are all culpable. We all have blind spots & this is a HUGE one.” 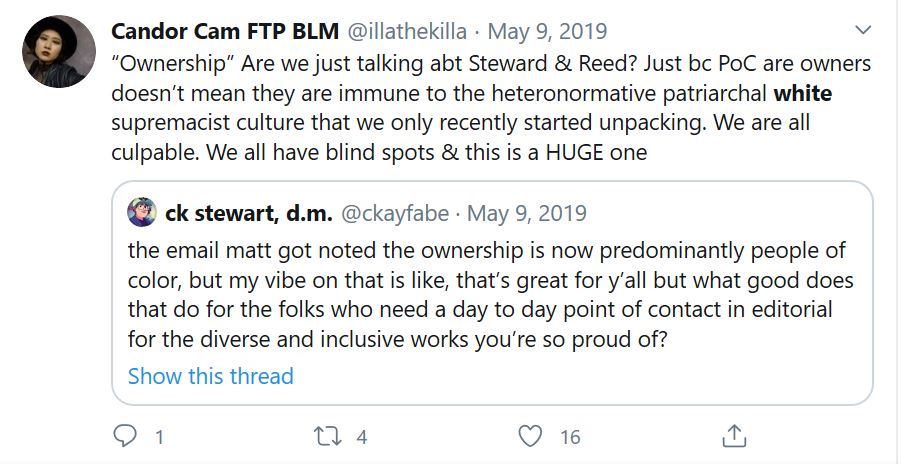 Zhang has also insinuated that white creators should not write stories with non-white casts. She wrote in August 2018, “Also, if ur a white creator & ur writing an all PoC cast…I dunno, I just feel like, whose voice r u taking away from? R u doing right by them? Are you sure they’re not caricatures from a flimsy Benetton ad?”