The King of Staten Island director Judd Apatow recently took to Twitter where he described President Donald Trump as a “mass murderer.” 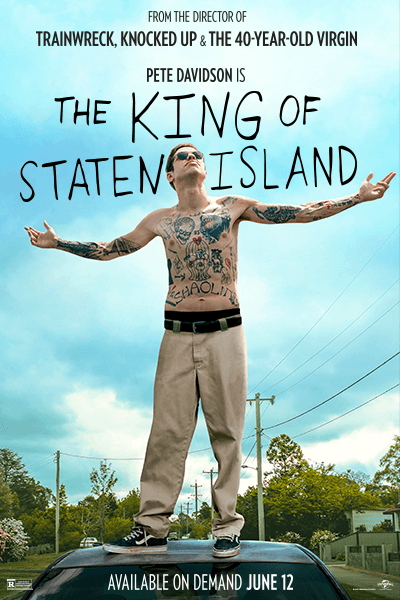 He continued, “In some states thousands of people, nobody young, below the age of 18, like nobody. They have a strong immune system. Who knows? Take your hat off to the young because they have a helluva immune system. But it affects virtually nobody. It’s an amazing thing.”

Stein took issue with Trump’s comments writing, “It’s hard to overstate how damaging this quote is. It’s absolutely not true and will give people a profound sense of false optimism. The preisdent here is quite literally endangering lives.”

It’s hard to overstate how damaging this quote is. It’s absolutely not true and will give people a profound sense of false optimism. The president here is quite literally endangering lives. https://t.co/bOwYEby2hT

Apatow would respond to Stein writing, “Donald is a mass murderer. Any comment which doesn’t make that clear is lying about what he is doing.”

He continued, “He has chosen to misinform people to help him politically which is killing tens of thousands more people. He is a mass murderer by choice.”

Apatow then said Trump “should be impeached for murder.” 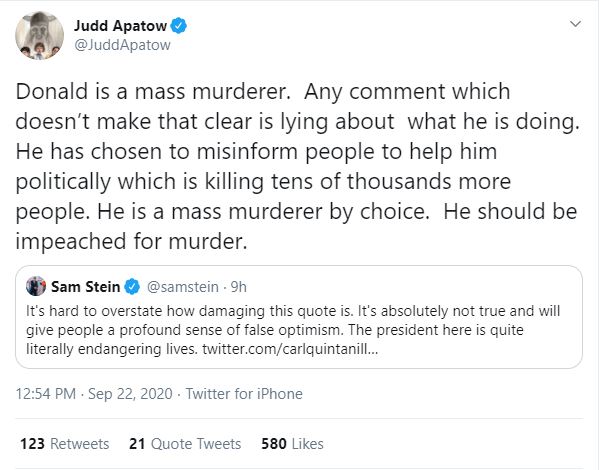 These comments are not out of the ordinary for Apatow. Instead, it appears to be quite normal for him to call the President of the United States a murderer.

On September 20th he also called President Trump a murderer. He wrote on Twitter, “Trump is a murderer. That should be the first sentence in every statement about him. He tried murder and enjoys it now.” 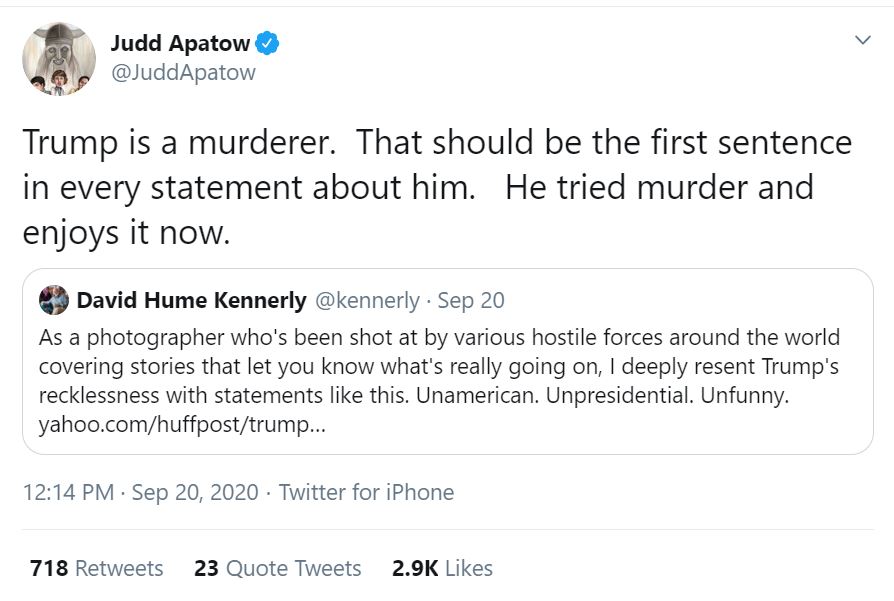 Apatow previously said that Trump “admires cruelty and murder.” He then added that “we must remove him and all of his supporters.” 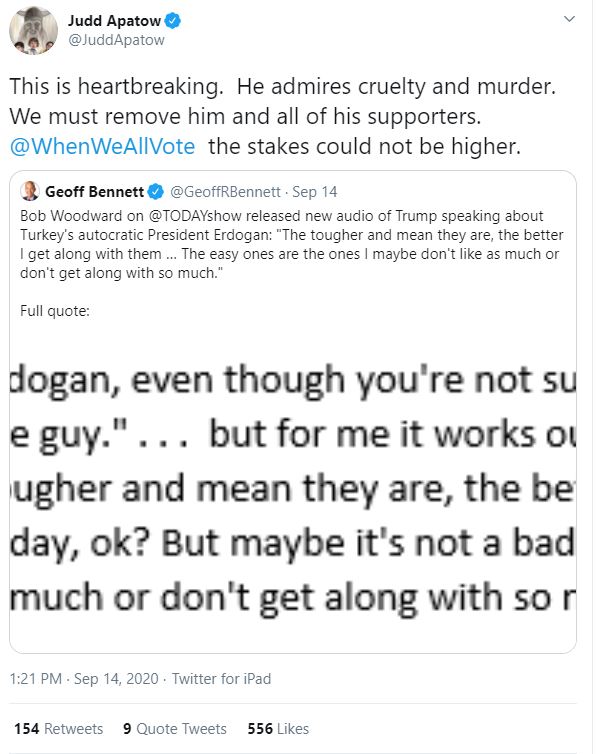 In June, Apatow wrote, “Donald Trump is a murderer. He should be impeached immediately. Anything less is allowing him to murder citizens every day.” 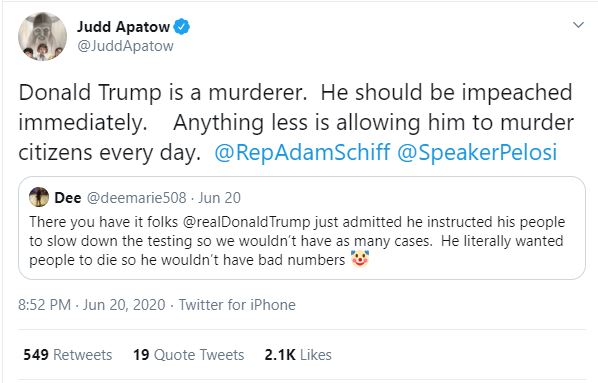 In March, Apatow wrote, “He should be in jail for murder. It’s all about Trump wanting to get re-elected so he doesn’t have to go to jail. He let a lot of people die to attempt to save himself.” 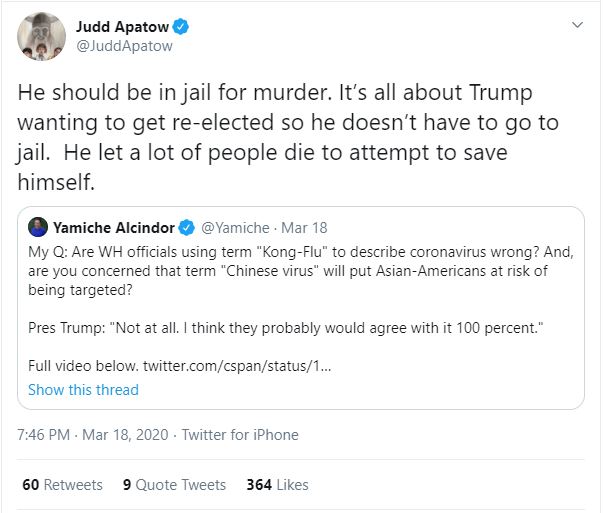 Apatow is no stranger to political rhetoric, although this his repeated attempts at calling President Trump a murderer is something new to 2020.

Back in 2019, Apatow was calling Trump supporters “cult like Trump zombies.”

He wrote in one tweet, “He’s a Nazi. He wants no judicial process. He kidnapped children and commits acts of violence for political gain and to support his racist views.He admires violent dictators. Trump is a Nazi. The debate is over.”

He then added, “Soon we will have proof he is a Nazi supported by the Russians.”

Previously, in 2018 the director and producer called for a boycott of all Fox properties.

When you support any Fox product you support THIS. Let’s all shut off Fox. There are so many channels, so many movies. We will survive. If Hitler also made adorable romcoms we probably wouldn’t go. https://t.co/q7AEoRE1ZV

It’s unclear if he’s still sticking by that boycott. He did appear to support Disney which acquired a number of Fox properties when former Disney CEO Bob Iger shared a first look at Disney Plus back in 2019. 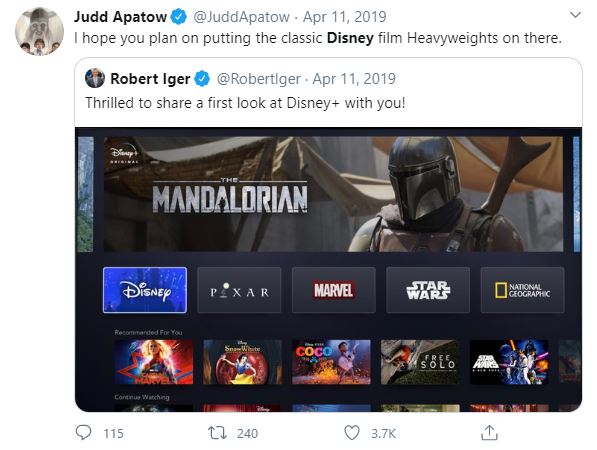 What do you make of Apatow’s recent comments regarding President Donald Trump?