Eisner-nominated letterer Jim Campbell is mad at DC Comics and Tom King for a lettering error and the publisher’s continued use of the Watchmen license despite the wishes of Alan Moore and Dave Gibbons.

Campbell, not to be confused with artist “Angry” Jim Campbell, still went on a profanity-laden tirade in a series of tweets (as reported by Bleeding Cool) going off on everybody involved with the Rorschach comic from DC Black Label. 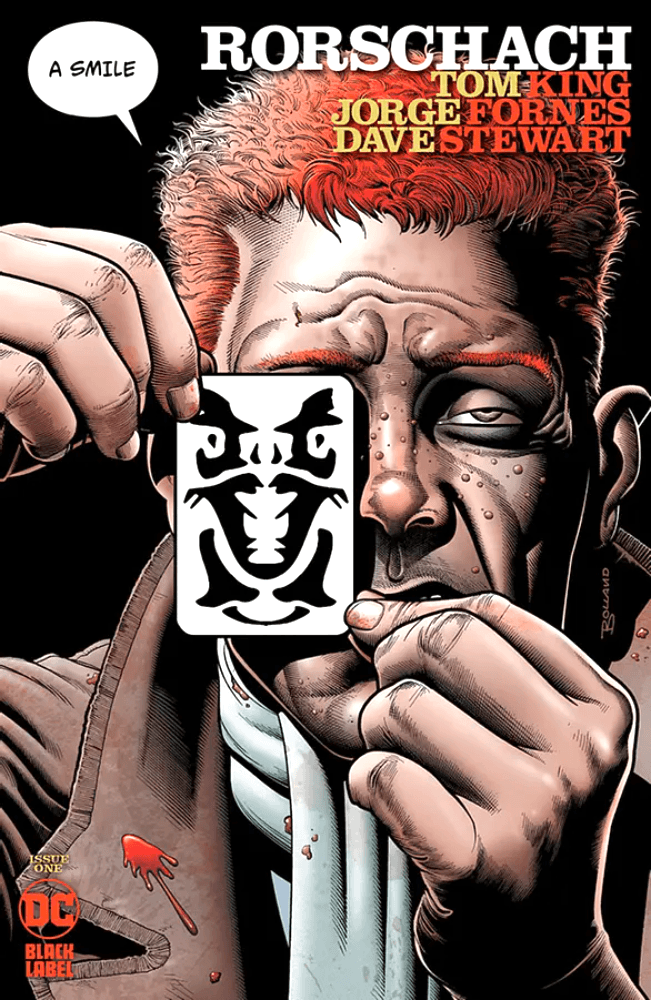 He tweeted this reaction to Brian Bolland’s variant cover for Rorschach #1 that’s inspired by The Killing Joke cover Bolland famously drew: “Two words and they still manage to f*** up the lettering.” 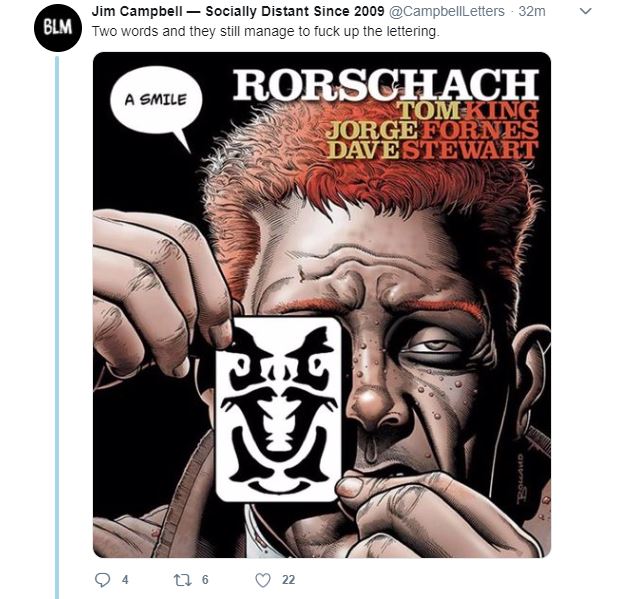 The dialogue bubble containing the lone phrase “A SMILE” has one capitalized “I” and it’s crossbarred. Normally, an “I” with crossbars is only used for the personal pronoun to differentiate from the vertical line used in most words.

That was Campbell’s entree complaint. For his main course, he went off on DC, whom he accused of theft, and everyone who has anything to do with the Watchmen continuation.

“Also: f*** Tom King. F*** Jorge Fornes and Dave Stewart. F*** anyone who participates in this blatant IP theft by DC,” he tweeted. “If your pay check is so important that you’ll sanction this absolute robbery, f*** you.”

Next, Campbell explained what he means by theft and that Watchmen doesn’t qualify as a work-for-hire arrangement. He argues the copyright still belongs to Moore and Gibbons.

“To be clear: you sell your work on work-for-hire, you know what to expect,” Campbell wrote. “But Watchmen *wasn’t* work for hire.”

He continued, “The reversion clause *clearly* implies that the work remained Moore & Gibbons’ copyright and that DC licensed it under specific circumstances. THIS. IS. THEFT.”

Campbell claimed he would work for DC on their outrightly owned characters but he wouldn’t touch Watchmen, tweeting “The fanboy in me would *kill* to get a DC gig on any number of titles that I love, but they could offer me fifty bucks a page and I wouldn’t touch this shit.” 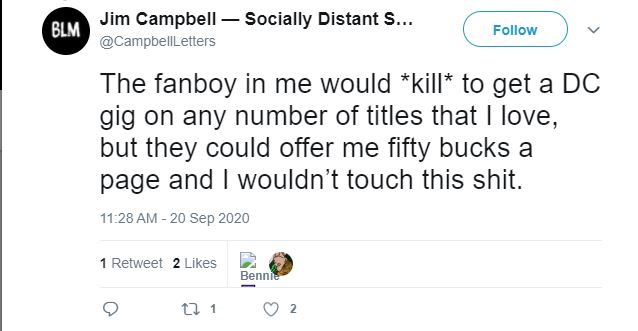 “The thing is: I don’t think WFH contracts are inherently evil — creators trade-off risk for reward,” he clarified. “But THIS isn’t THAT.”

He added, “If the rights were supposed to revert to Moore & Gibbons after the work went out of print, then clearly the rights RESIDED with them and were LICENSED to DC.”

He calls DC’s continual peddling of Watchmen “an IP grab,” writing, “The fact that DC has now folded Watchmen into their wholly-owned universe is unquestionably an IP grab, which may be legal but which is *morally* reprehensible.”

Campbell also said he believes Alan Moore pursued legal council which had some grave news about the writer’s chances in court.

“I’m certain Moore has taken legal advice on this, and I’m sure that advice was: ‘Whatever the merits of your case, DC/Warner have such deep pockets that they will bankrupt you long before you get anywhere near a court,'” wrote Campbell.

“And that, sadly, is the state of the world,” he continued, placing blame equally on creators. “But if other creators didn’t line up to help massive corporations f*ck over other creators… well, that would be nice. Wouldn’t it?”

He concluded by restating his work-for-hire point: “(And, again, WFH stuff is fair game, but that’s NOT what this is.)”

Jim Campbell’s incendiary tweets were deleted. However, he would post a separate thread saying he stands by everything he said in the original thread.

He first explained why he deleted the original thread. Campbell wrote, “So…I deleted my Watchmen tweets because someone decided to jump in on the end of the thread & start tagging in just about everyone who’s ever worked for DC. I thought deleting the 1st tweet would nuke the thread…but, no, so I had to delete a bunch of now-contextless replies.”

He added, “To be clear, though, I stand by everything I said in those original tweets. To wit.”

He then went on to reiterate why he believes DC Comics should not be doing any more Watchmen. Campbell wrote, “Moore & Gibbons signed a contract in the confident expectation that they would, at some point in the future, regain the rights to their work. I haven’t read the contract; I am not a contract lawyer, but…”

Campbell continued, “…That reversion clause creates at least a MORAL implication that the rights RESIDED with them and were licensed to DC under specific circumstances (ie: the original work remaining in print).”

He then claims his own view was held by former DC Comics president Paul Levitz. Campbell wrote, “This view was apparently shared by Paul Levitz (widely held to be One Of The Good Guys) who, as senior DC exec reportedly blocked this exact kind of f***ery for years.”

Campbell added, “(Note how shortly after his departure “Before Watchmen” happened, which I also deplored at the time and remain profoundly disappointed at the number of big name creators who contributed.)”

The letterer would again reiterate his views that work-for-hire (WFH) work is not evil, “Has DC screwed over many other creators? Yes. As has Marvel, and many other big publishers. However, I do not believe WFH contracts are inherently evil — creators trade off risk and reward, and you know what you’re getting when you sign up for a WFH gig.”

He would then express that his main issue with what DC Comics is doing with Watchmen is creating derivative works based on Watchmen as well as incorporating the Watchmen story into the main DC Comics continuity. 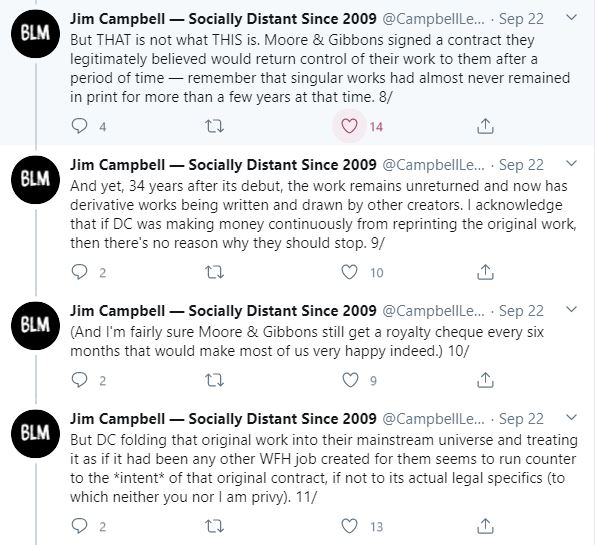 Campbell then reiterated that he believes Moore has received legal advice that Warner would bankrupt him if he attempted to reclaim Watchmen, “I am fairly sure Moore will have taken legal advice on this, and I’m sure part of that advice will have been: ‘Whatever the merits of your case, DC/Warner have deep enough pockets to bankrupt you before you get anywhere near a court.'”

Campbell would then discuss the film and TV adaptations of Watchmen as well, “I don’t what the deal is on the film/TV rights, whether Moore & Gibbons sold those separately themselves or whether they were bundled in with the main deal for the comic, but I don’t think either the film or TV series should have been made with both creators’ express consent.”

Related: Doomsday Clock: The Identity of the New Rorschach is Finally Revealed!

He then described what DC Comics was doing to Watchmen as “f***ery of the highest order.”

Campbell explained, “So, yes, I think this is f***ery of the highest order, which I deplore, along with Before Watchmen and Doomsday Clock. F*** DC and fuck anyone who actively participates in what (irrespective of legality) is clearly ETHICALLY a flagrant IP grab.”

Finally, he warned other creators about signing a similar contract to Moore’s.

He wrote, “Creators: consider that Moore & Gibbons signed a contract that they believed gave them a better stake in, and eventual control of, their work. They didn’t get either of those things and it’s ended up effectively no different to a standard WFH contract.”

“If a publisher could do that to THEM, they can do it to YOU. So maybe, just maybe, don’t be in such a hurry to help them do it,” he concluded.

Rorschach #1, by Tom King, Jorge Fornés, Dave Stewart, and Clayton Cowles, is out on October 13th.