With Halloween just around the corner and most of the world stuck inside due to quarantine, bored scare-seekers like myself are undoubtedly looking to various media for their annual horror fix.

While movie fans turn to give films such as Alien and Hereditary their umpteenth rewatch and avid video game players take the chance to revisit classics such as Resident Evil 4 or P.T., the more anime minded among us may be looking for their own fix of terror. Luckily, the Japanese are among some of the best creatives when it comes to horror, and anime is no exception.

Here are the top ten spookiest anime series and movies to watch this Hallo-weeb! 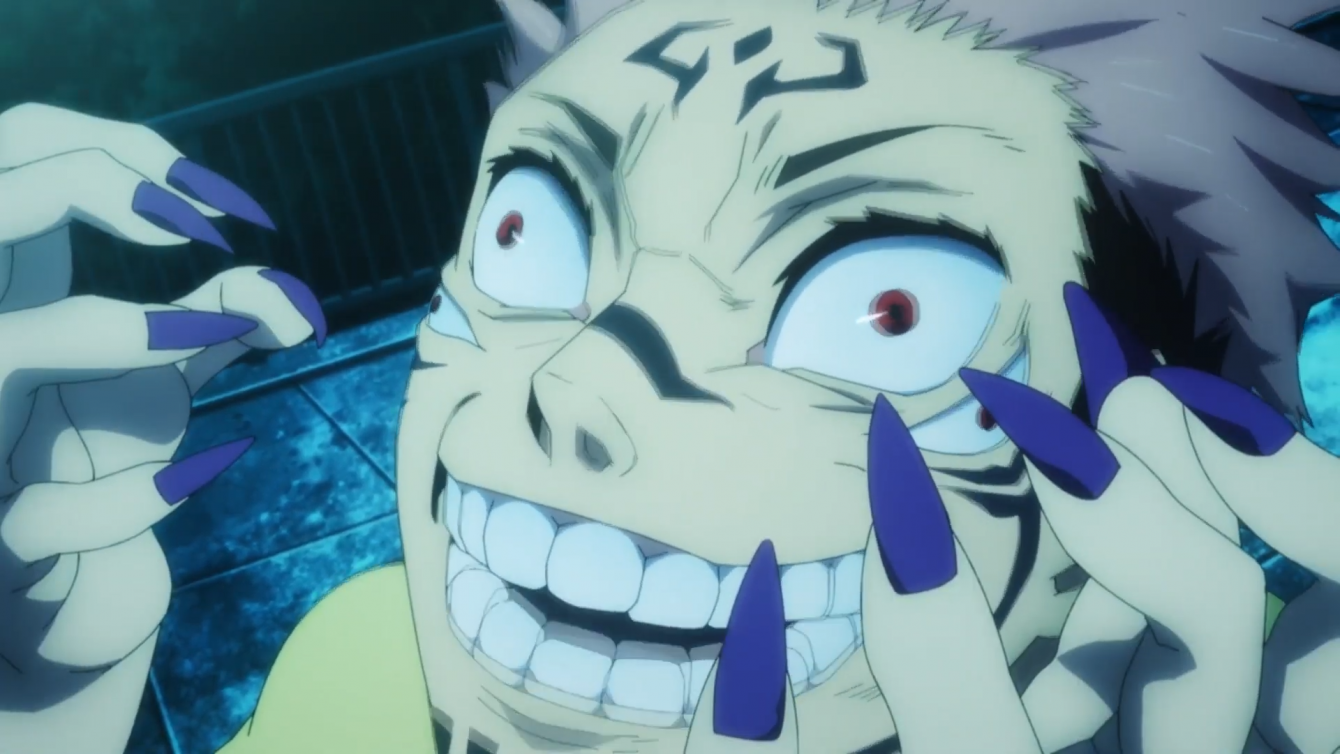 After swallowing a cursed and rotting finger in order to save his friends from the Curses they accidentally unleashed upon their school, Yuji Itadori becomes host to a powerful Curse known as Sukuna.

While the world’s sorcerers seek to exorcise Sukuna as soon as possible, after seeing Yuji retain control of himself despite being possessed, they postpone his execution until he can eat the rest of Sukuna’s fingers in order to rid the world of the Curse for good. 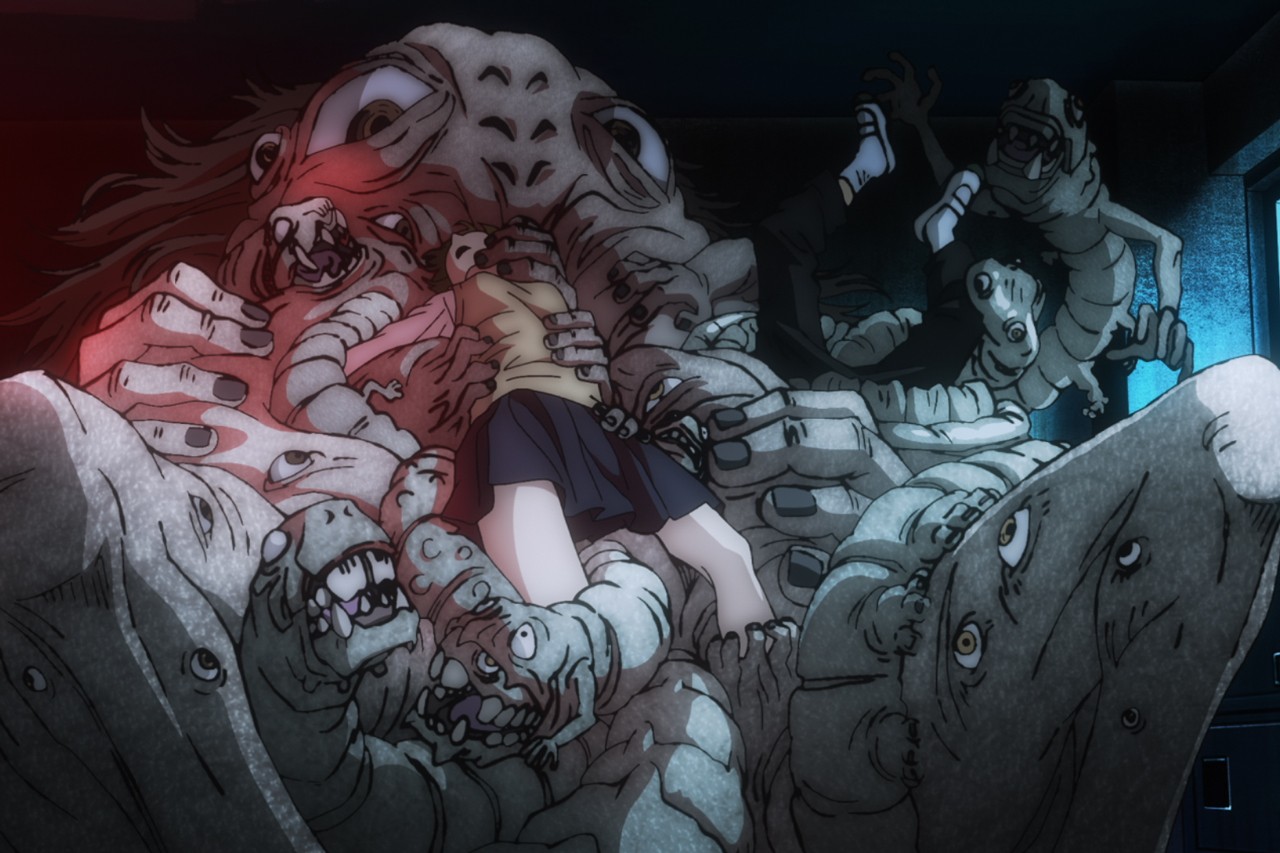 Jujutsu Kaisen is the most recently produced anime to land on the list, don’t let it’s rookie status fool you. This series combines a traditional shonen-style story (reminiscent of series like Dorohedoro and Chainsawman) with visceral and terrifying visuals.

While the series is still ongoing, Jujutsu Kaisen is shaping up to become a horror anime classic. 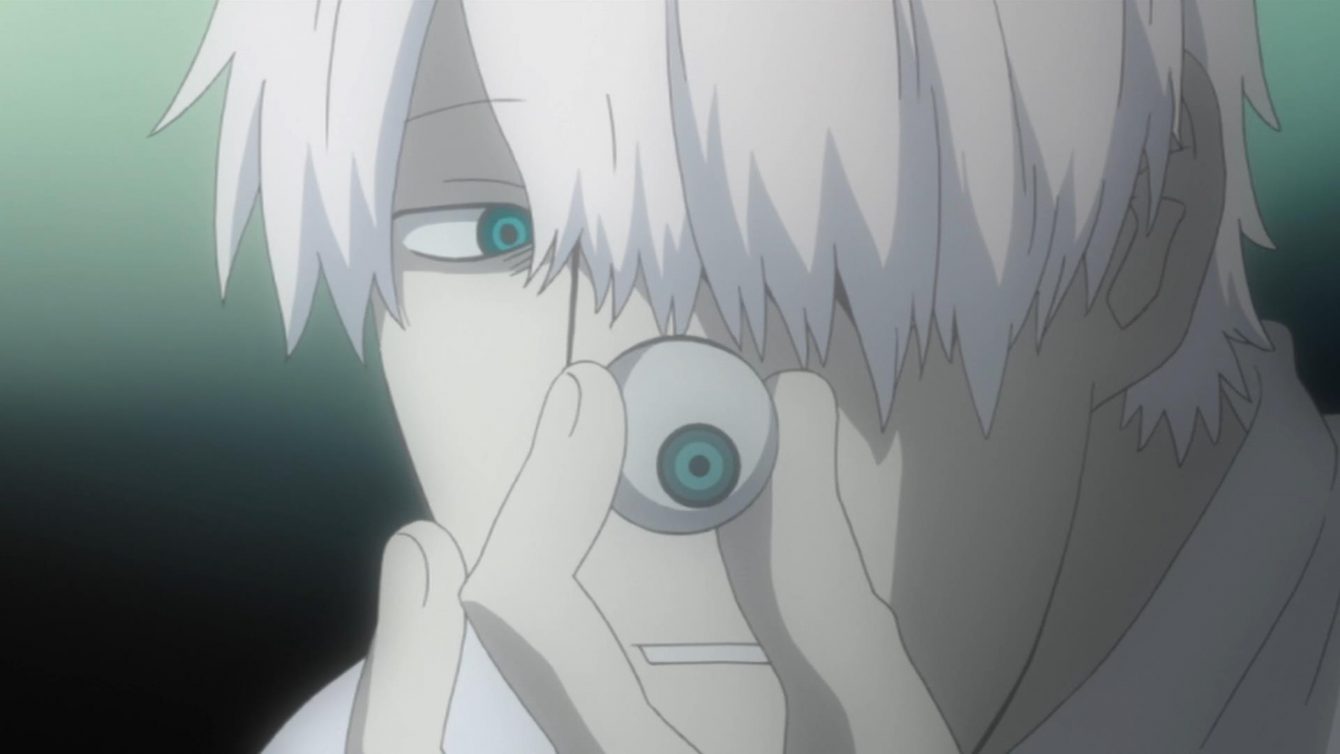 In a fictional version of 19th century Japan, otherworldly, unseen creatures capable of displaying supernatural powers, known as Mushi, cause trouble for the world around them. Told in an anthology fashion, Mushi-shi follows a man named Ginko as he travels the country using his ability to see and attract Mushi to solve illnesses and events related to the primitive creatures.

The supernatural detective series, which feels even parts John Constantine and even parts Pokemon, presents horror in a more mysterious and chilling way than other entries on this list. 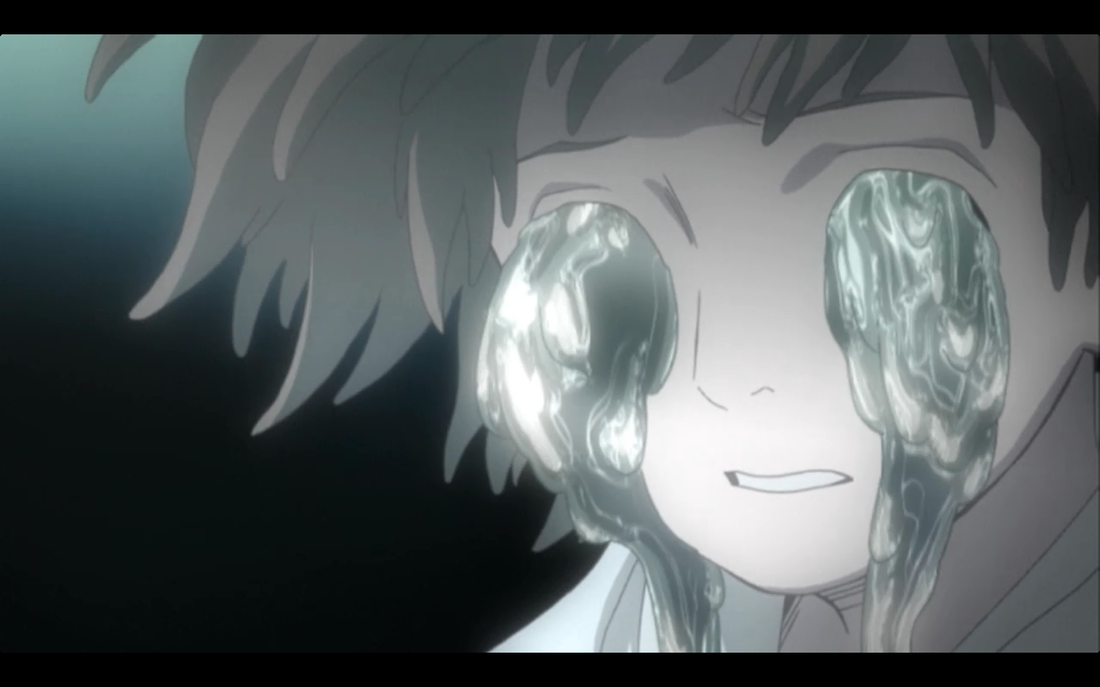 Rather than relying solely on creepy imagery to drive home its horror (of which there is plenty), Mushi-shi communicates the feeling of fear one experiences when faced with an unknown mystery.

Thanks to the series’ anthology format, each episode stands alone as its own story, allowing for any viewer to drop in and experience the mystery of the Mushi without missing a beat. 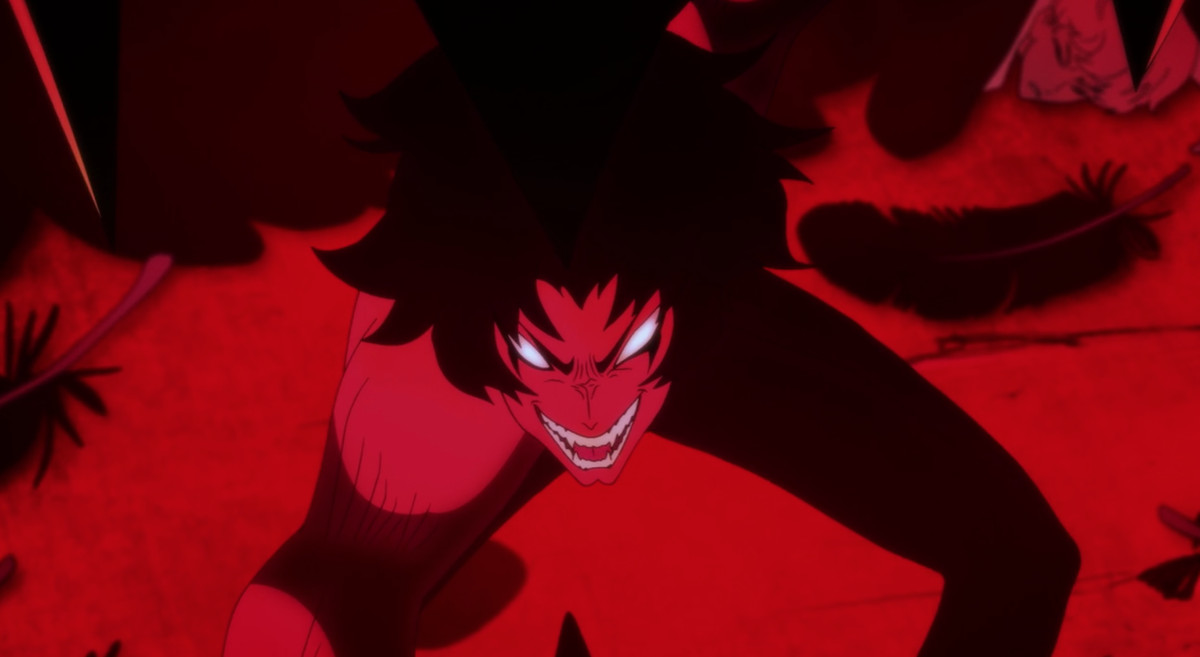 After finding himself the target of a demon named Amon during the sudden appearance of a group of demons in a nightclub, Akira Fudo rejects his possession and takes Amon’s demonic power for himself.

The only supernatural creature on the side of humanity, Akira dedicates himself to fighting back against the hordes of demons seeking to invade Earth, as well as Ryo Asuka, his best friend who seems to be losing himself to his obsession with proving the existence of demons. 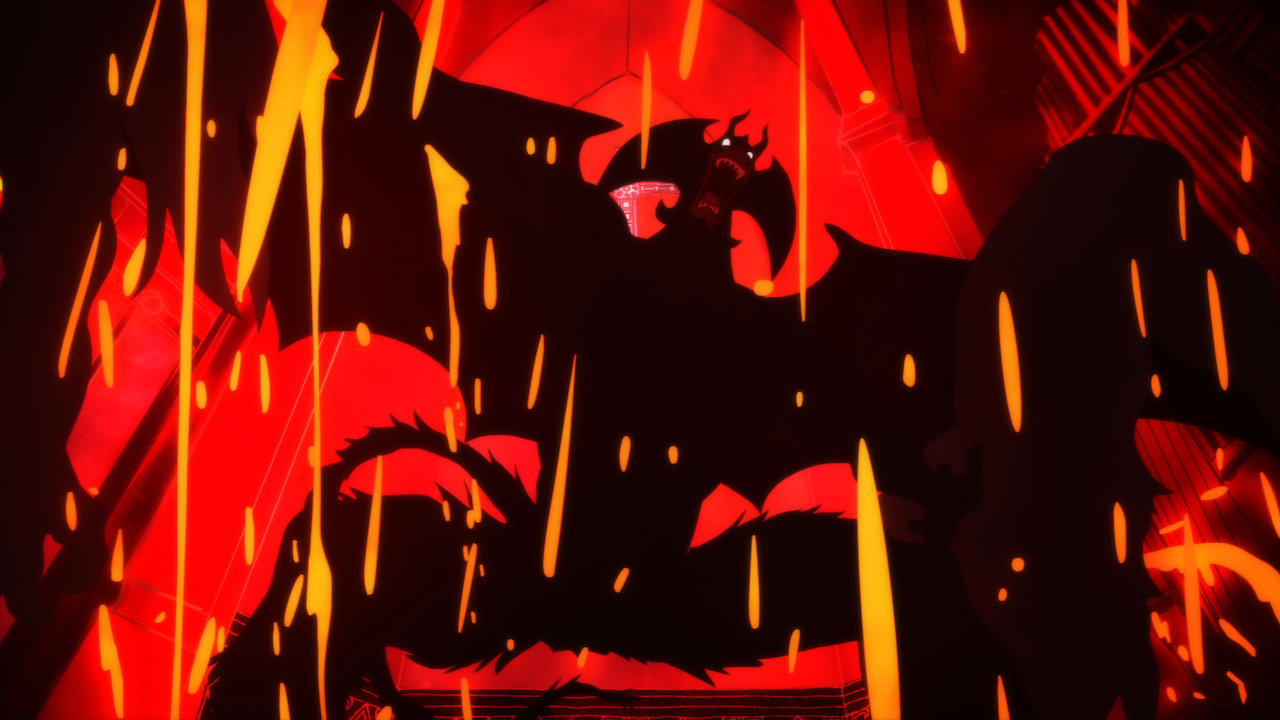 For those looking for a ‘slasher’-type feel in their anime, look no further than Devilman Crybaby. A modern adaptation of Go Nagai’s classic Devilman series, Devilman Crybaby took the internet by storm when it premiered in 2018, as it presented an anime that was mature not only in its visuals, but also in its themes of sexuality, love, and bigotry.

The Netflix-exclusive series’ biggest strength lies in its highly stylized animation, which presents itself in a clean and exaggerated style that both accentuates the gratuitous gore and violence featured throughout its ten-episode run and parallels the unnatural nature of its setting and protagonists. 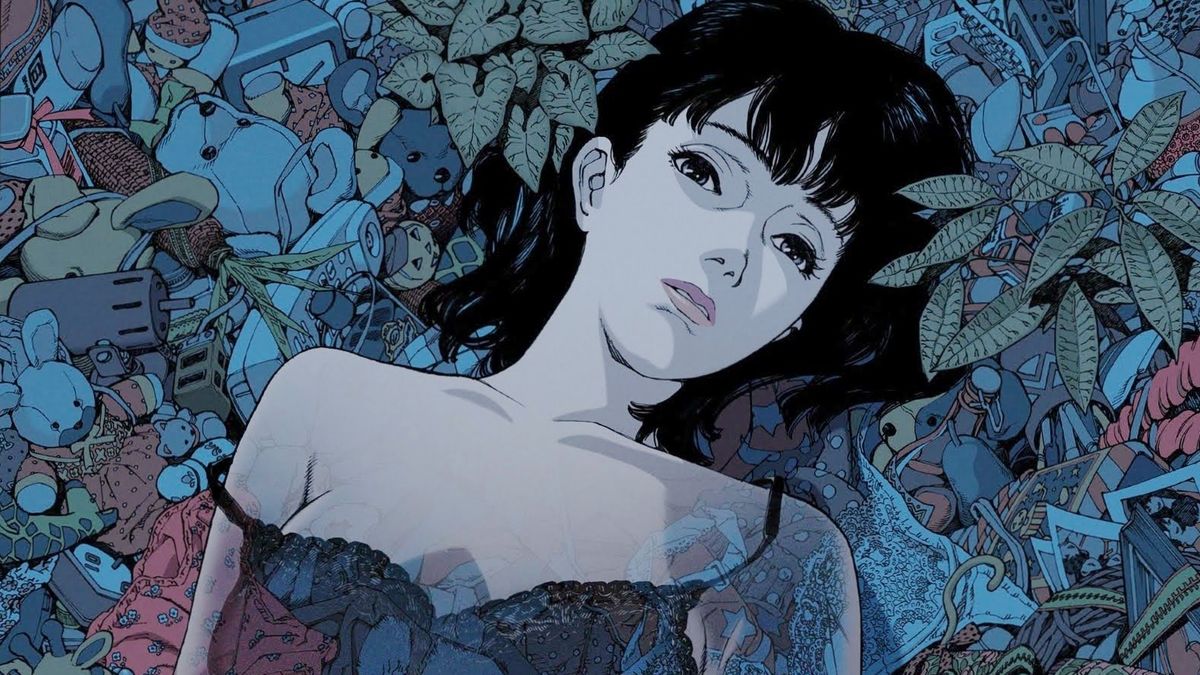 When successful J-POP Idol Mima Kirigoe announces her intent to retire from music in order to pursue an acting career, Kirigoe finds herself spiraling into a circle of mystery and psychological terror that culminates with her finding a mysterious website titled ‘Mina’s Room’ that hosts journal entries seemingly written by Kirigoe from her own perspective.

Arguably the most unconventional entry on this list, Perfect Blue deals more with the horror related to one losing grip on their reality and sanity, rather than any form of physical life or death threat (though this is obviously explored in the “Me-Mania” subplot). 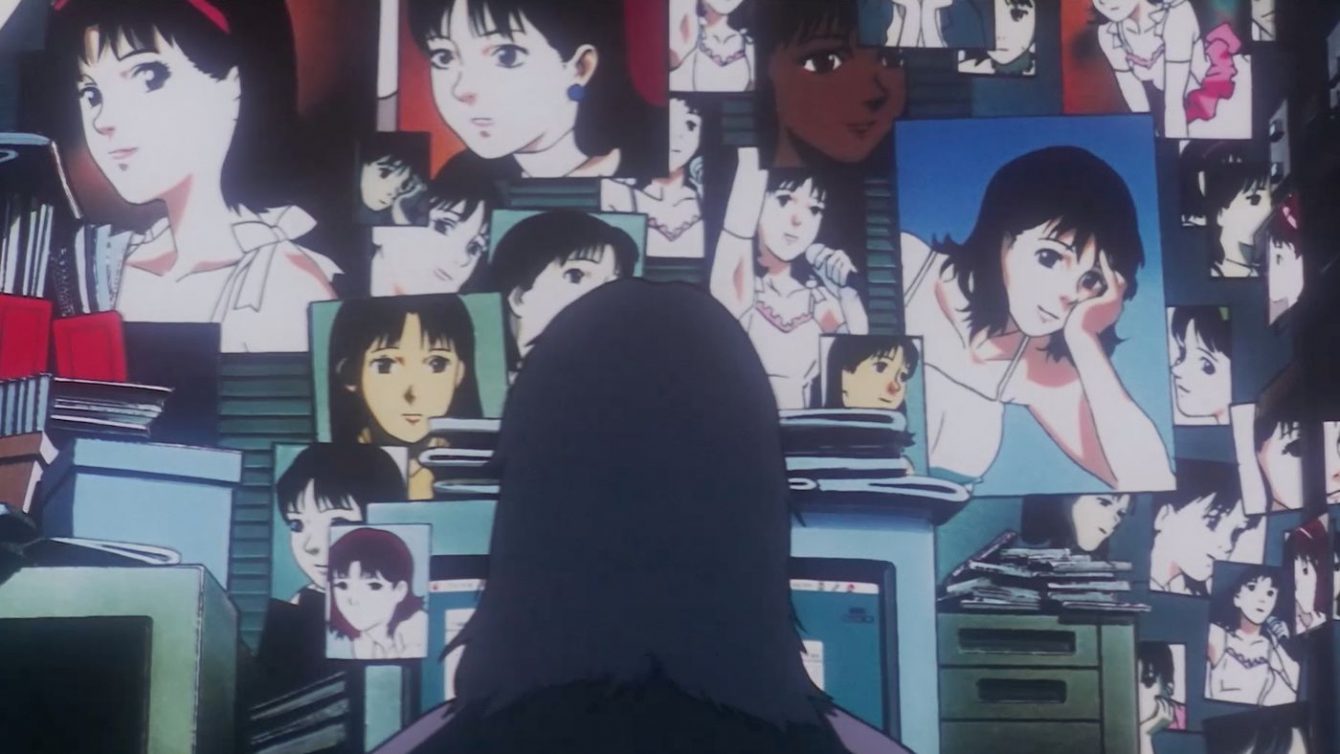 Directed by famed anime director Satoshi Kon, his signature art direction, which keeps viewers unsure as to what is real and what is not, and his exploration of the thin wall separating fantasy and reality work in tandem to present one of the most unsettling yet acclaimed anime films of all time. 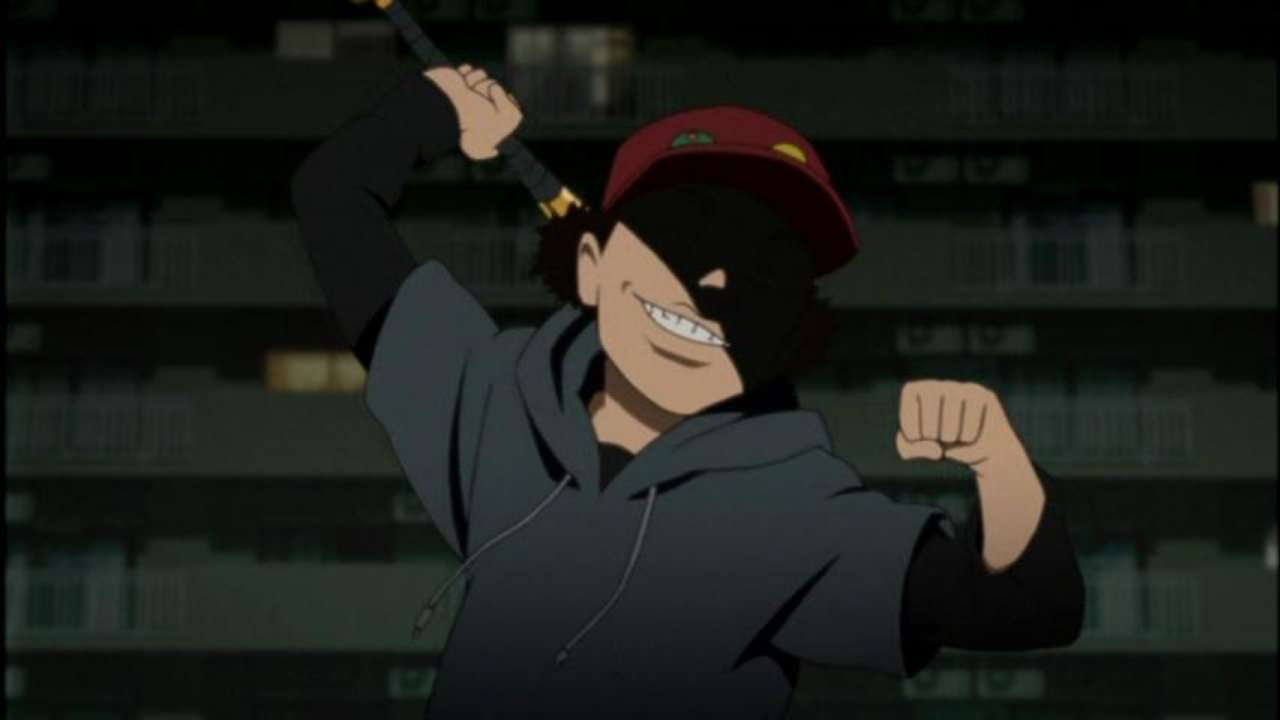 One night, artist Tsukiko Sagi is attacked on her way home by a young boy wearing a golden pair of skates and a golden-baseball bat with a distinctive bend to it.

Though Tsukiko’s story is initially dismissed as a self-created hoax, Tokyo soon finds itself terrorized by the mysterious boy, now dubbed Lil’ Slugger, as his ability to elude capture proceeds to wreak havoc on the lives of those involved in the case.

Honestly, is it a surprise that two of Satoshi Kon’s works made the list? Many remember Paranoia Agent from its regular airings on Adult Swim in the early 2000s, and for good reason. 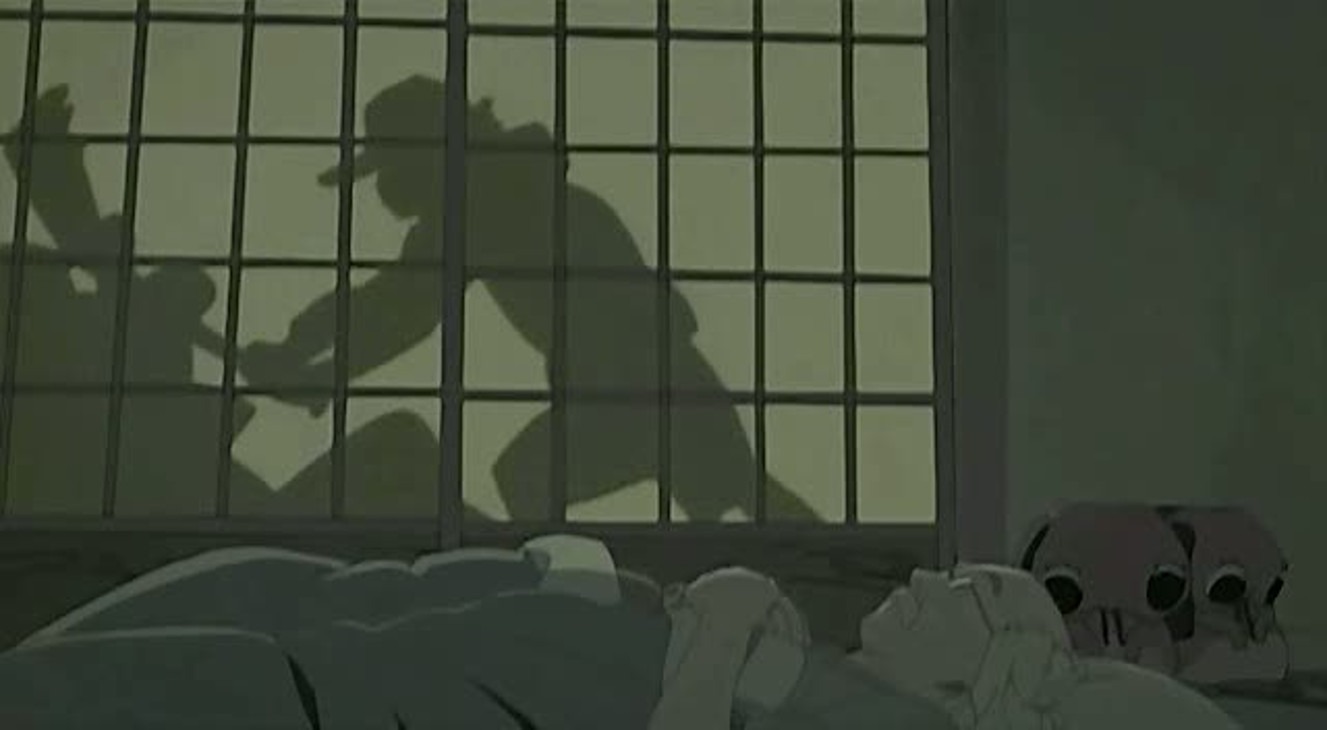 Like Perfect Blue, Paranoia Agent furthers Satoshi Kon’s exploration the separation of fantasy and reality, while also managing to wed the terror of a physical, random assault with the personal stress and fear felt by someone whose reality is being dismissed writ large.

Perhaps most horrifying of all, however, are the very relatable issues that led Tsukiko to become wrapped up in the plot, which reinforce how human the characters and their actions are.

5. Higurashi: When They Cry 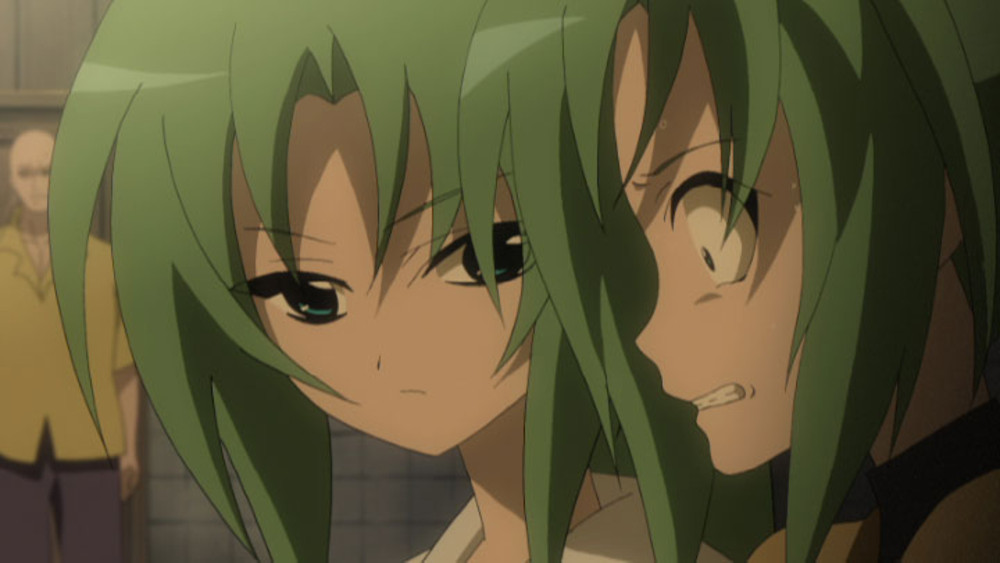 When Keiichi Maebara moves to Hinamizawa, he soon befriends a group of his classmates and discovers that his new home is plagued by a string of annual murders known as the “Oyashiro Curse”.

As Keiichi and his friends begin to investigate the case, they soon find themselves faced with alternate realities, a viral disease that induces madness, and their own loss of sanity as they seek to rid the world of the source of the disease.

Originally debuting in 2002, Higurashi: When They Cry is not only a staple of the horror anime genre, but also one of the preeminent examples of the talent and creativity that can be found amongst Japanese doujin games. 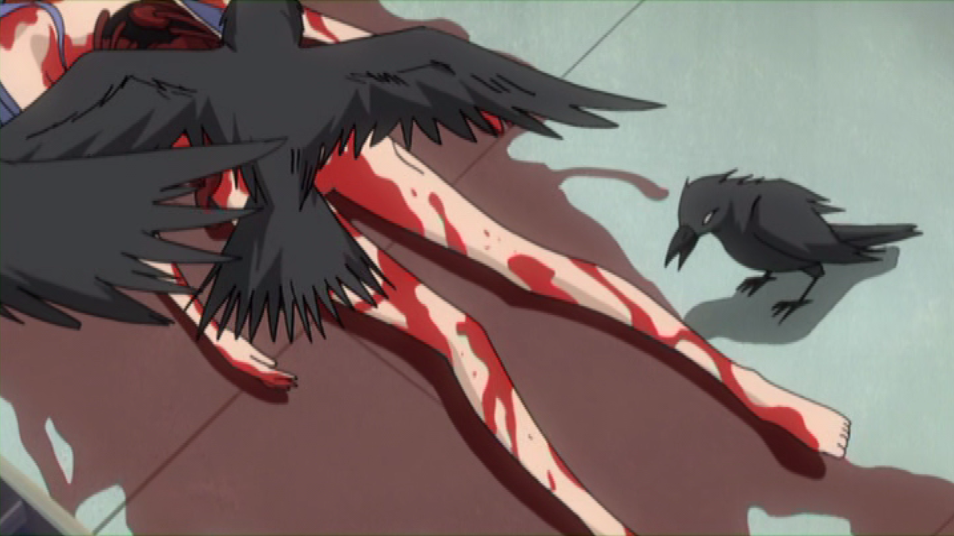 It’s hard to describe the series without giving away any major plot points, as Higurashi continually one-ups itself by introducing ever more horrifying and seemingly inescapable circumstances for the protagonists to face.

While the constant twists-and-turns provided by the series’ supernatural elements may turn off some viewers, the story ultimately rewards those who persevere to the end of the loop. 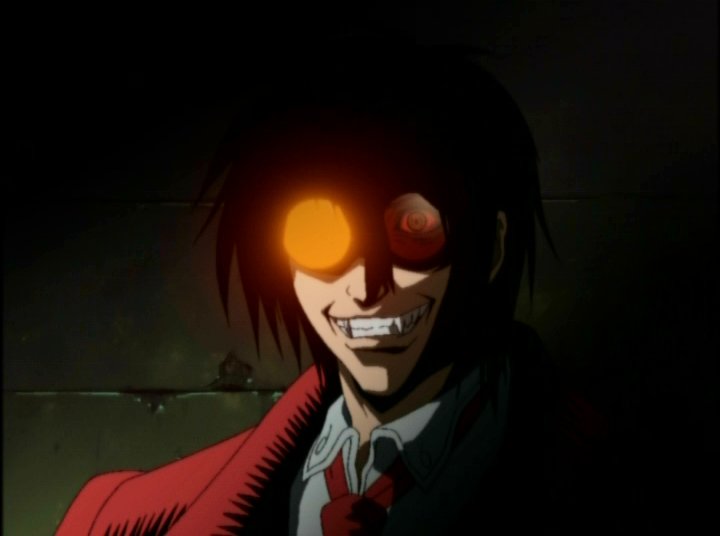 After his defeat at the hands of the original hunter one-hundred years prior, the world’s most powerful vampire, Alucard, swore loyalty to the Helsings and  now protects the organization’s leader as she continues the work of her ancestor.

When a sleeper group of Nazis attempt to revive the Third Reich through the use of vampires, Alucard and the Royal Order find themselves in a three-way battle for the fate of the world, only for the group to reveal that their true goal is the ultimate killing of Alucard. 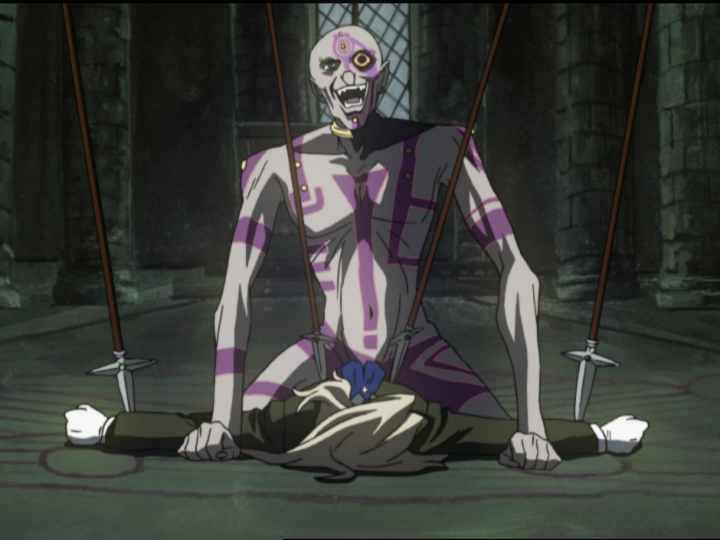 Simply put, no list of horror anime is complete without the appearance of Hellsing. From its dark elements such as Nazis and vampires to its connection to the lore of Dracula, Hellsing crafts a dark adventure narrative that leans heavily into its gothic themes and imagery.

For those unsure of the medium or dissatisfied with the more teenager-focused stories of popular anime, Hellsing should come as a welcome and exciting surprise. 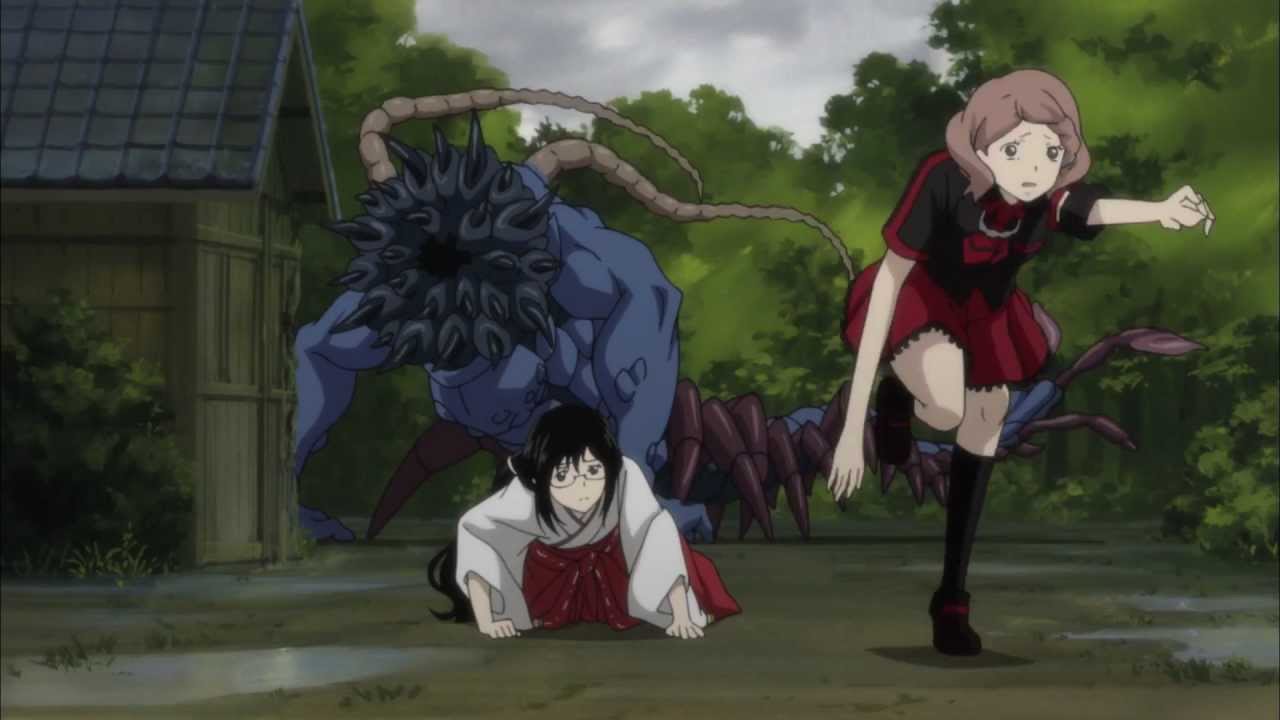 Unbeknownst to her friends, shrine maiden Saya Kisaragi is far from a normal teenager. At night, her and her father defend the village from the Elder Bairns, a race of monsters who possess inanimate objects in order to attack humans and feed on their blood.

However, as the monsters become more desperate, those around Saya begin to suffer, leading to the revelation of dark sercrets and even darker realities.

The second entry in the Blood franchise, Blood-C continues the fast-paced supernatural story of its predecessor. While the plot is an excellent exploration of the weight Saya bears as her friends begin to fall victim to the Elder Bairns, the true draw of this series is its terrifying monster design and animation. 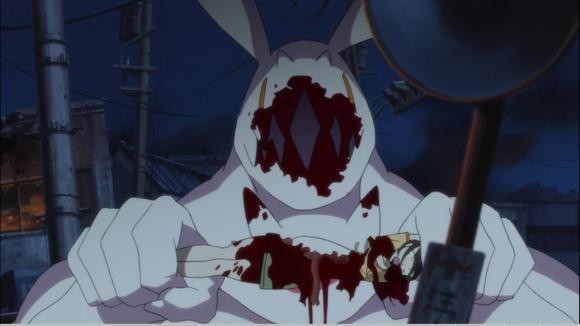 The Elder Bairns regularly appear as twisted versions of animals, such as rabbits or wolves, composed of various human limbs mashed together, and their attacks are presented as quick, devastating, and shocking.

The pure terror expressed by the crowds and characters during these moments elevates Blood-C to the top three. 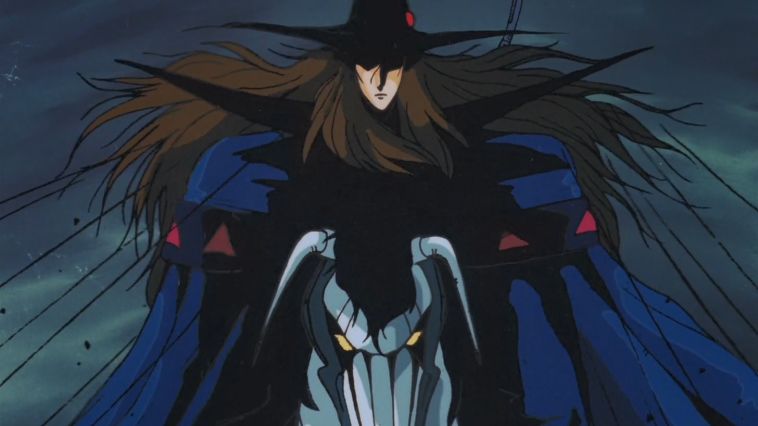 In the post-apocalyptic year of 12,090 AD, young Doris Lang is attacked by Count Magnus Lee, an ancient vampire lord, after she accidentally stumbles into his domain.

After an encounter with a vampire hunter known only as D, Doris hires D to kill Count Lee in order to prevent her from transforming into a vampire herself.

The oldest entry on this list, Vampire Hunter D is one of the most influential and memorable anime films ever created. 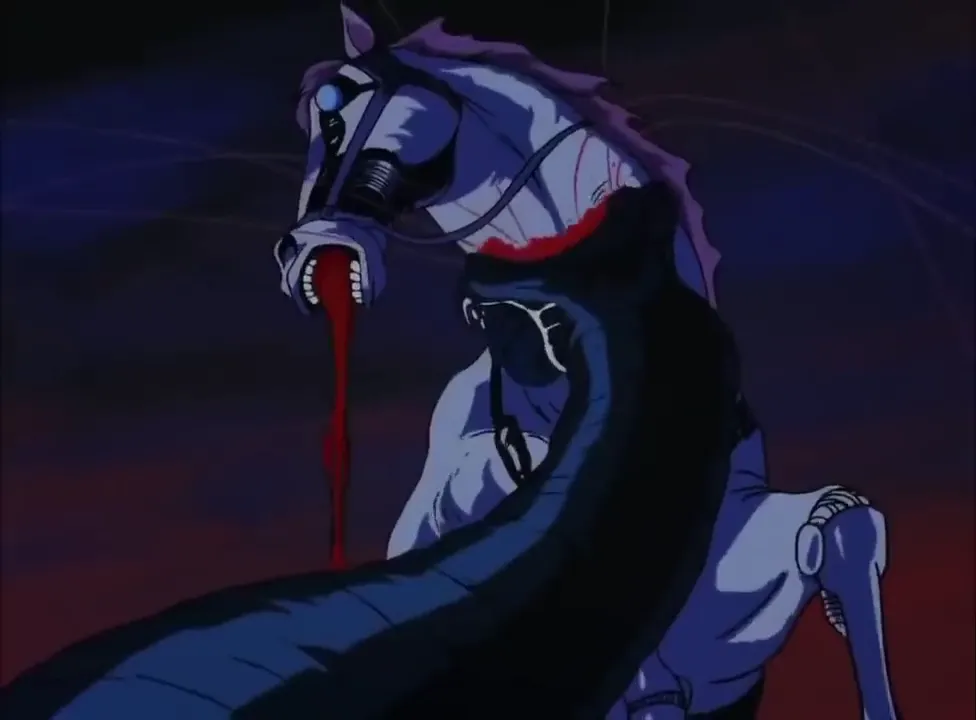 Based on a series of novels published since 1983, the film features a world inspired by westerns, sci-fi, Lovecraft horror, and the occult, all of which contribute to its dark and scary tone. 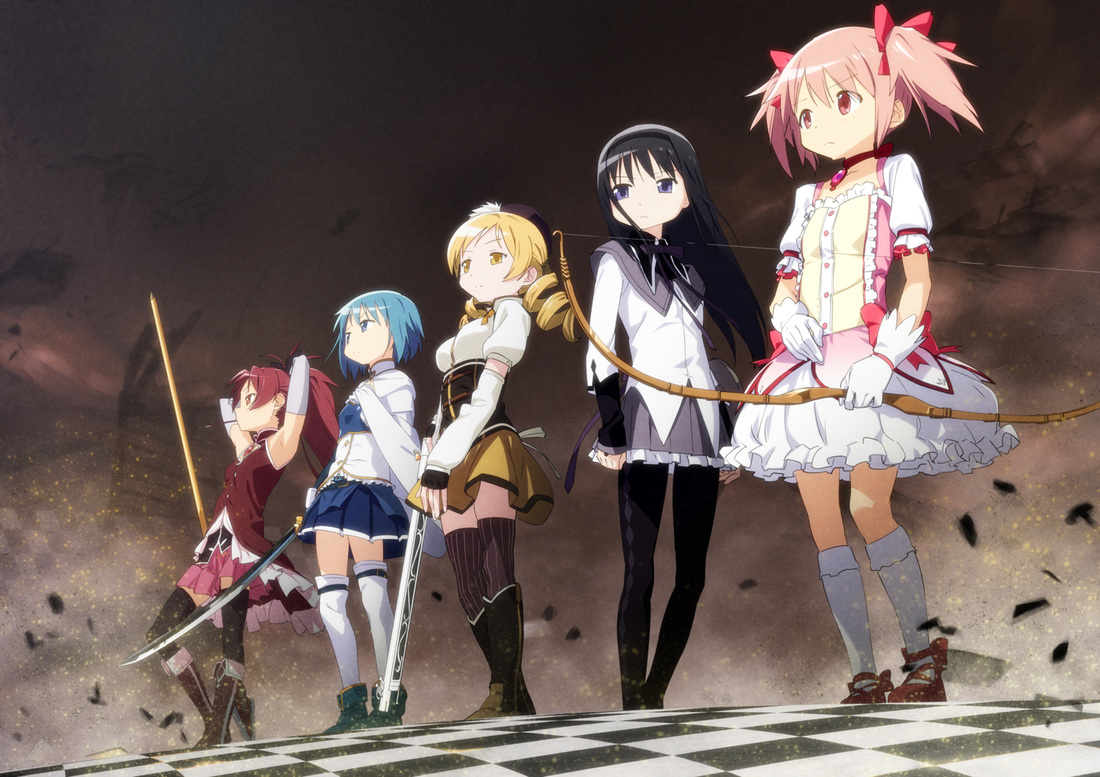 Following a chance meeting with a mysterious and magical creature known as Kyubey, Madoka and a group of her classmates are granted the power to transform into a ‘magical girl’, ala Sailor Moon.

However, soon after receiving their powers, Madoka and her friends realize that the life of a magical girl is filled with more peril, violence, and suffering than they could have ever imagined. In an attempt to fight back against their fates the girls find themselves enwrapped in a world-ending journey filled with tough decisions and brutal battles. 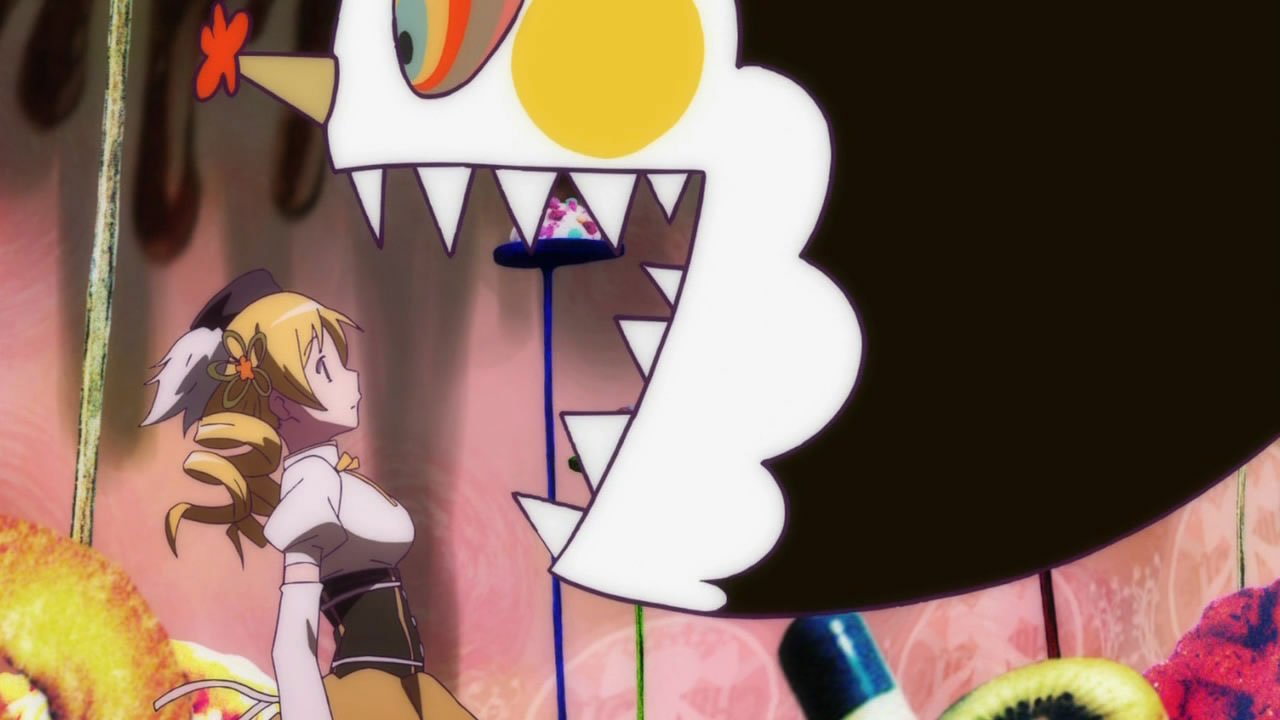 Don’t let the title or the promotional material fool you: Madoka Magica is messed up. Though on the surface the series appears to be nothing more than yet another take on the magical girl trope, it soon devolves into a horrific deconstruction of the genre and confronts its characters with egregious challenges to both their mortality and sanity.

As far as horror staples go, Madoka Magica has them all, from the supernatural to wanton gore, leading this series to stand tall amidst its more classically scary peers.

Thanks for checking out the list, and remember, as always, this list is but the opinion of one man. Let me know your thoughts on my selections! Did I choose anything overrated? Did I miss something? Let me know on social media or in the comments down below!