The oceans are a treacherous  and dangerous place, and that goes double for Monkey D. Luffy, the man seeking to take the mantle of King of the Pirates.

Since he set sail over twenty-three years ago, the captain of the Straw Hat pirates has had his fair share of conflicts, ranging from infighting amongst his crew to outright assaults on government strongholds.

Though his exploits have cemented his place in world history and earned him a net bounty of 1,500,000,000 Berri, some of Luffy’s more dazzling and exciting battles are better remembered than others. 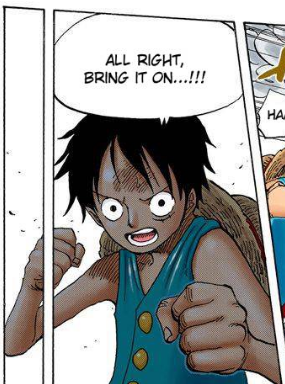 Without further ado, it’s time to look back on Luffy’s ten best fights from across One Piece’s extensive run! 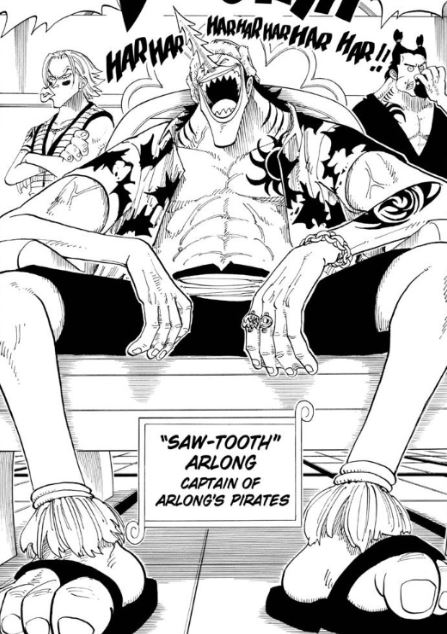 Enraged after seeing Nami break down in tears after years of abuse at the hands of the notorious Fishman pirate, Luffy declares war on Arlong and proceeds to tear down his entire empire, from the cartography that Nami completed for him in the past to his own personal Arlong Park stronghold.

Aside from the destructive use of Luffy’s Gomu Gomu no Ono technique to end Arlong’s reign of terror, this fight is notable for its display of the Straw Hat captain’s compassion towards his crewmates, with Luffy’s entire motivation for engaging with Arlong based on his defensive reaction to the fear and pain he saw in Nami’s eyes after she was forced to return to the service of the Arlong Pirates. 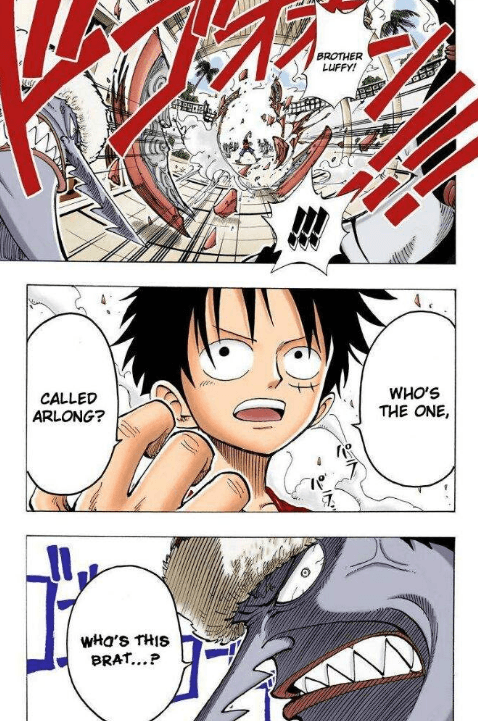 Luffy’s gesture of placing his straw hat upon Nami’s head in order to ease her fears and take the burden of the battle off of her shoulders also serves to reinforce his selfless nature and willingness to protect his crew at all costs. 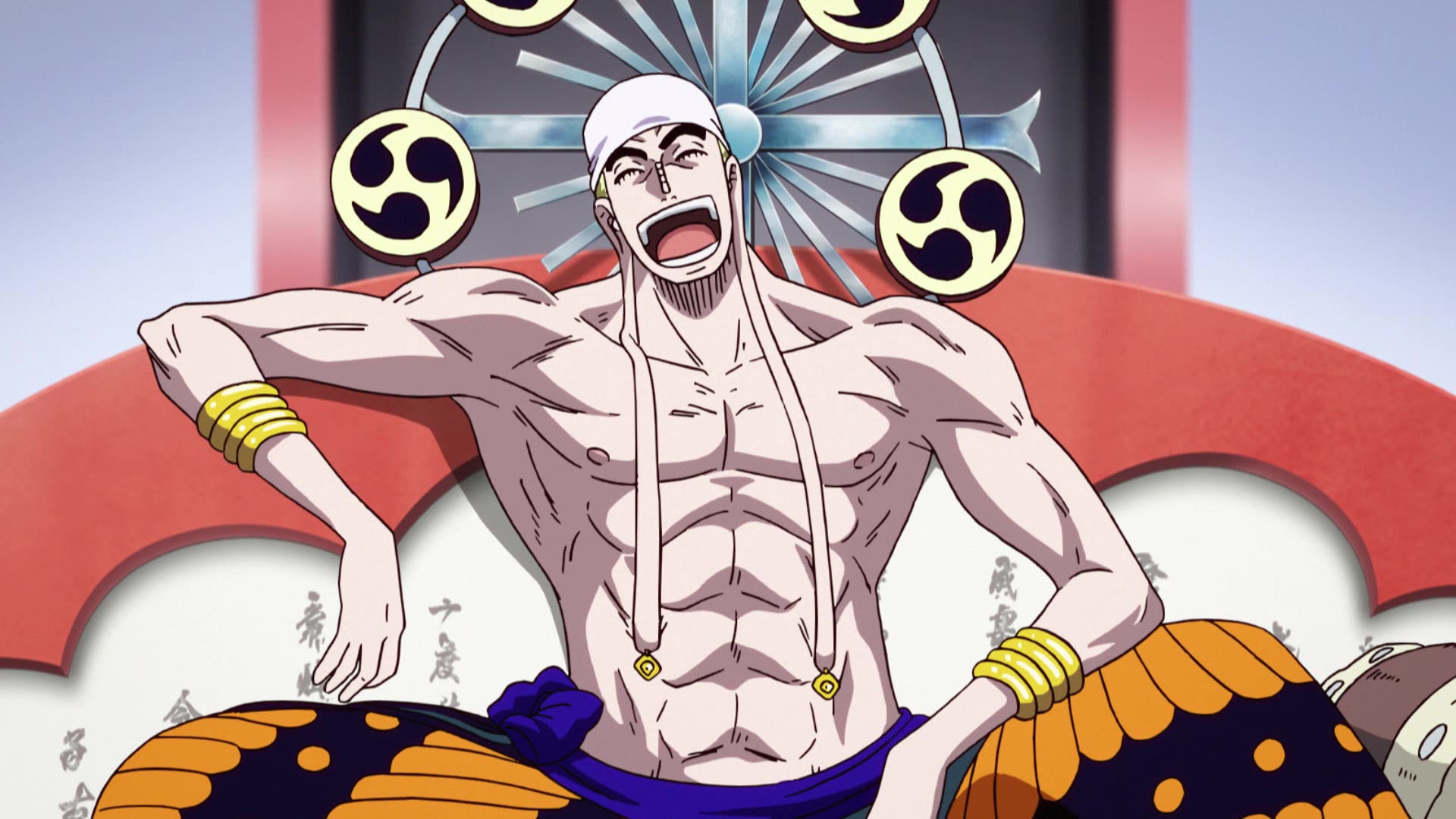 Shocked to discover that Luffy is immune to the overwhelmingly powerful lightning powers granted to him by the Goro Goro no Mi, the self-declared god Enel melts a golden statue around the Straw Hat’s arms and kicks him off of his floating ship, the Ark Maxim, in an attempt to circumvent this immunity and take Luffy off the field.

Though Luffy falls, he soon returns to the fight by rushing up the Giant Jack beanstalk in a last-ditch effort to stop Enel’s plans. Despite the desperate use of his 200,000,000 Volt Amaru form, Enel fails to stop his enemy’s advance, and is permanently knocked off his self-appointed throne by Luffy’s Gomu Gomu no Ogon Rifle. 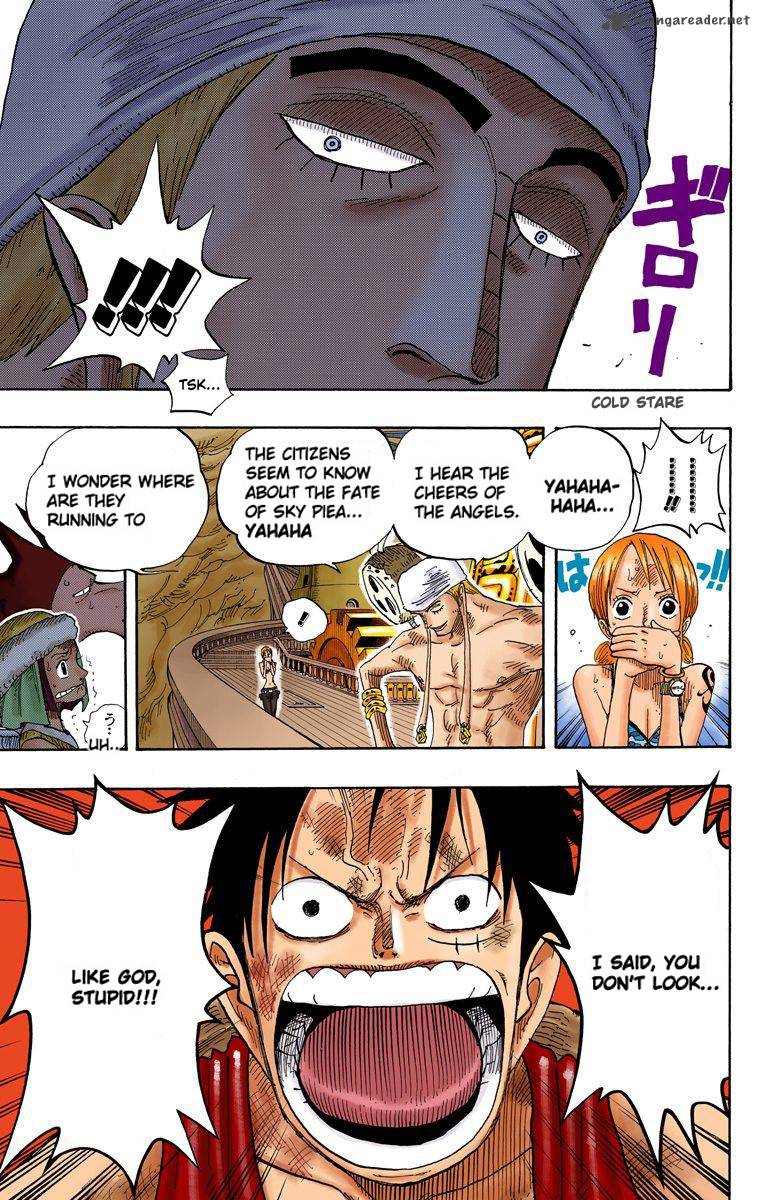 Shonen is always at its best when fights aren’t necessarily determined by outright strength, but rather through clever use of ability and strategy. Throughout their entire confrontation, Luffy and Enel are forced to change their respective approaches towards the fight, which imbues the battle with a sense of dynamism and establishes that even the most powerful of abilities has its limitations.

This fight also features a significant moment of foreshadowing, as Enel’s precognitive ‘Mantra’ ability is the first instance of Haki throughout the entire series. 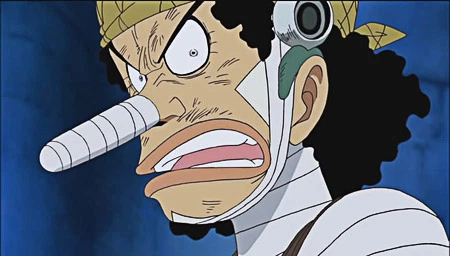 Filled with a sense of betrayal after Luffy decides to decommission the Going Merry without consulting him, Usopp challenges his captain for a duel over possession of the ship.

Despite going all out against a man holding himself back due to nostalgia and friendship, Usopp is eventually put down by a single, heartbroken punch from Luffy, and is removed from his position as a member of the Straw Hat Pirates.

This battle of pride marks a turning point for Luffy, as he is faced with the harsh reality that his life as a pirate could entail betrayal from someone close to him, as well as his responsibility to put his honor before his emotions if he is to be taken seriously as the captain of a pirate crew. 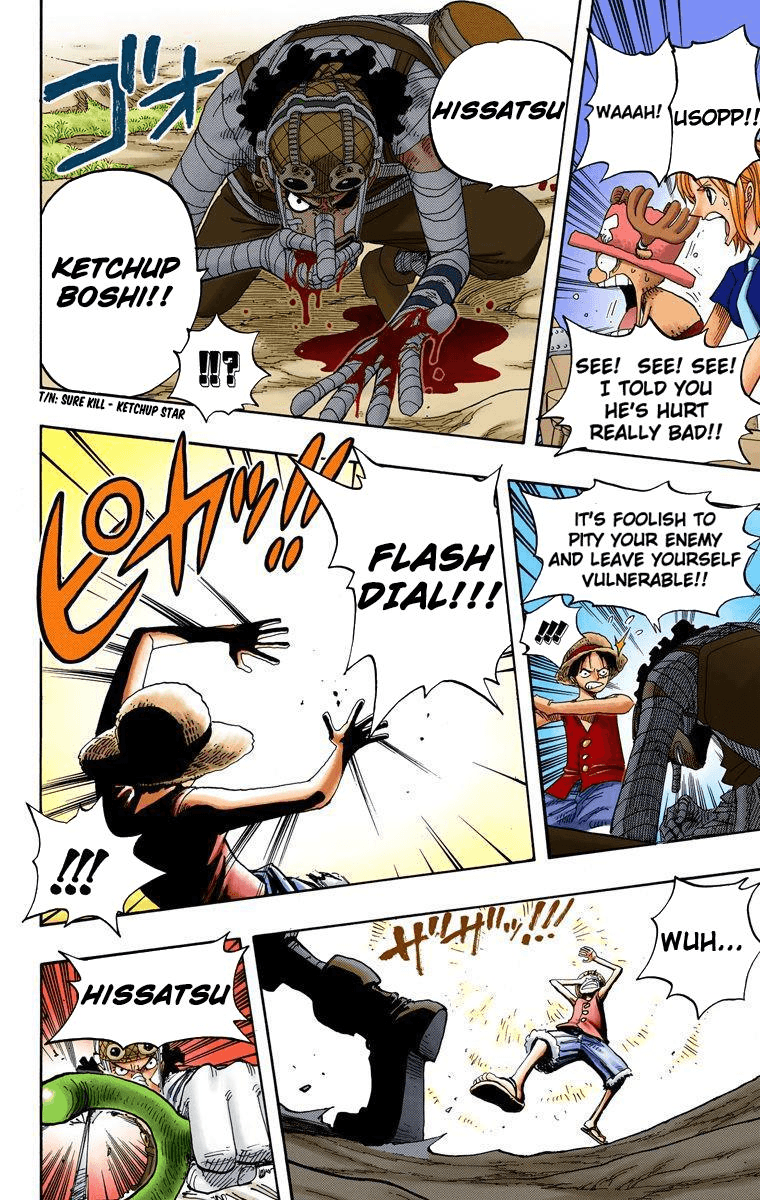 Usopp also goes through a moment of personal growth, as he is forced to confront his position as one of the ‘weakest’ members of the Straw Hats and fights to prove his worth not only to the crew, but to himself.

On the bright side of this conflict, Usopp’s temporary dismissal from the Straw Hats led to the introduction of his legendary alter ego, Sogeking, and an official bounty being placed on the sniper’s head. 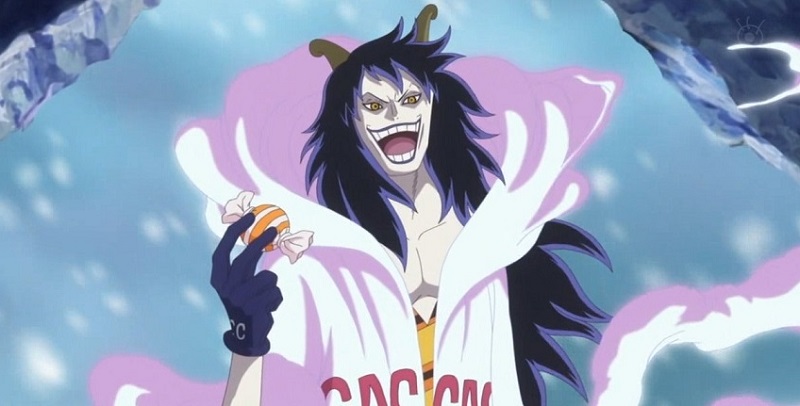 Seeking to capture the notorious scientist to assist in Law’s plan to take down Doflamingo, Luffy barrels through the Punk Hazard Research Institutes in order to hunt down Caesar.

Upon discovery, Caesar refuses to go down without a fight and proceeds to unleash all manner of poison gas attack and technological trickery against Luffy in an attempt to save his own life, leading to a frantic game of cat-and-mouse between the two devil fruit users. 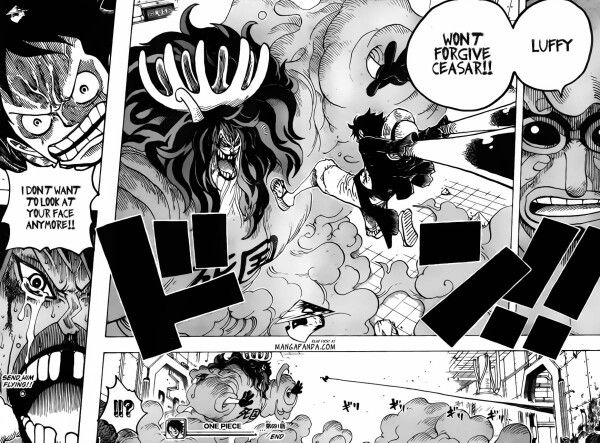 It may seem hard to remember now, but Caesar Clown once posed a major threat to the Straw Hats. Prior to Luffy’s intervention, the morally bankrupt scientist had defeated most of the crew and was prepared to escape capture at any cost.

In fact, thanks to Caesar’s reputation prior to his capture, his defeat by Luffy established the young pirate’s presence as a threat to Doflamingo’s vast criminal empire and the continued machinations of the World Government.

However, this fight also exposes Caesar’s cowardice and lack of honor, which ultimately makes his defeat as a result of Luffy’s first use of the Gomu Gomu no Grizzly Magnum all the more satisfying. 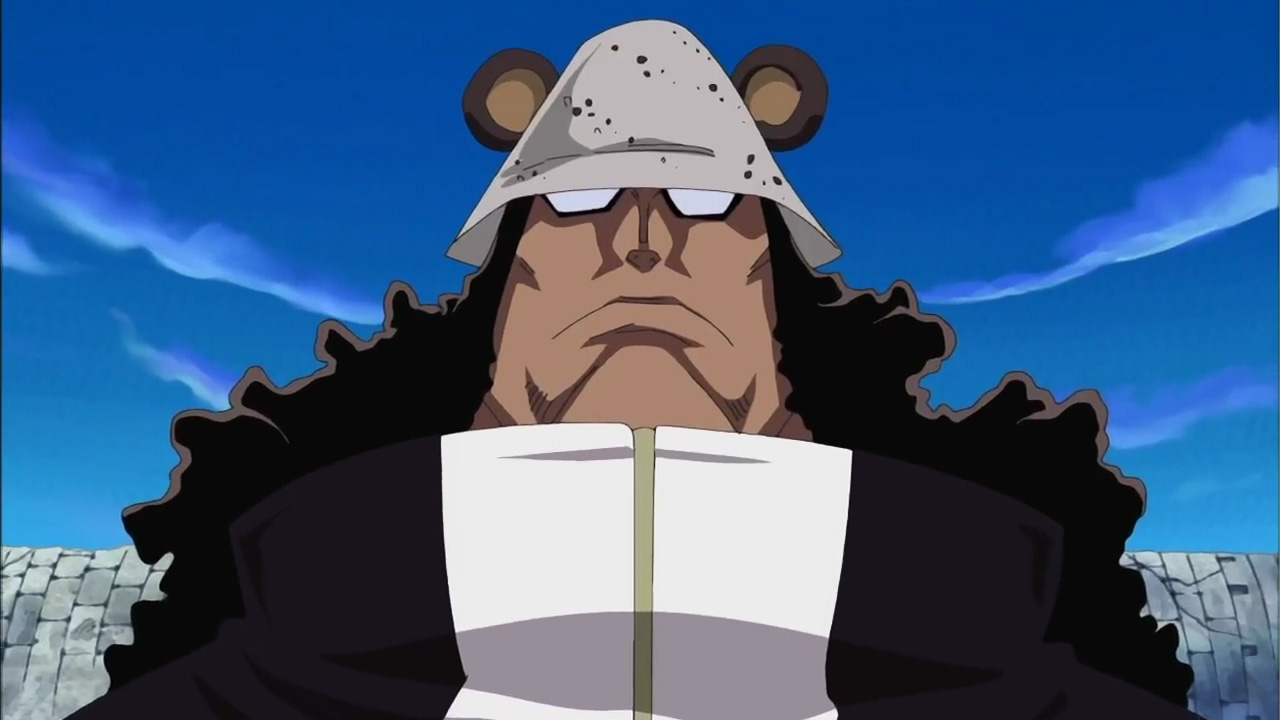 As the Straw Hats flee from the Marine’s descending upon Sabody Archipelago following Luffy’s assault of a World Noble, they are suddenly confronted by Bartholomew Kuma, a then-member of the Shichibukai.

Despite his initial rescue of Zoro from the clutches of a Pacifista, Kuma proceeds to systematically cause every member of the Straw Hats to literally disappear. Even a terrified and enraged Luffy proves to be no match for the Tyrant, as Kuma dispatches the young captain as easily as he did his crewmates.

This moment marks not only a major moment for the series, but also for Luffy himself. For the overall story, this moment serves as a catalyst for its traditional-shonen-style timeskip, which marks a significant moment of progress for the Straw Hats quest for the One Piece. 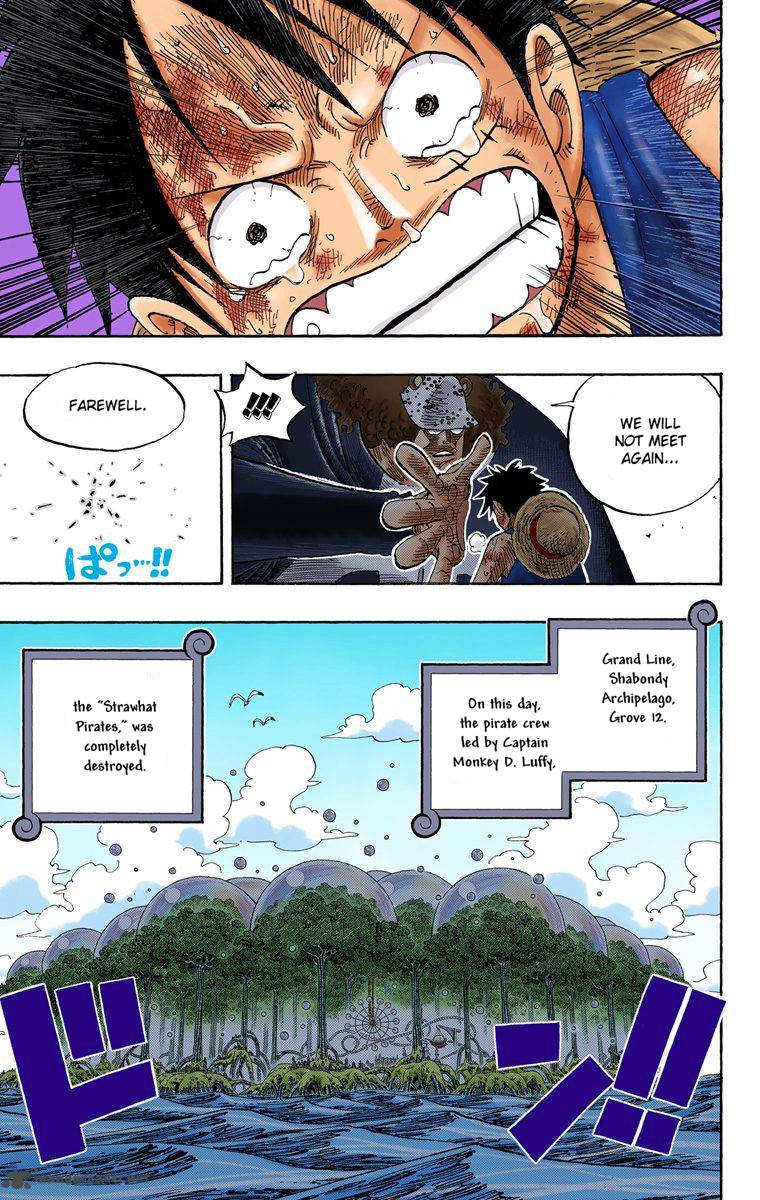 Luffy, confronted with a feeling of overwhelming helplessness in the face his inability to prevent the disappearance of his friends, is inspired by this fight to grow stronger, eventually achieving the level of power that has allowed him to guide his crew through the New World. 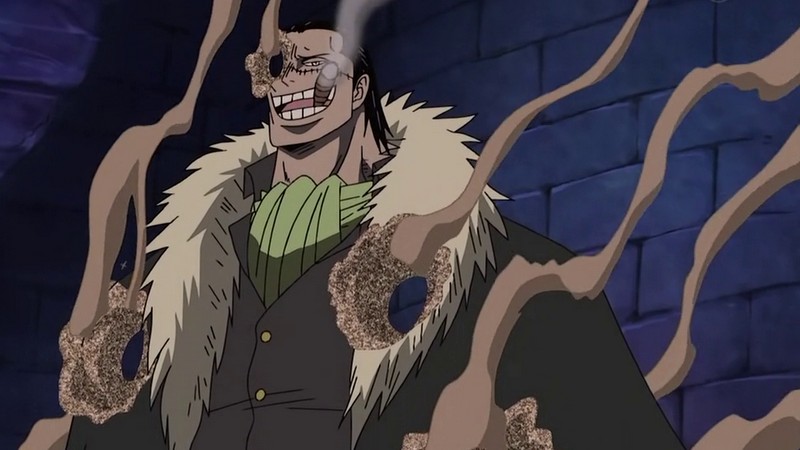 During their final confrontation in Alabasta, Luffy discovers that that the seemingly untouchable Sand Logia user Crocodile could have his power negated by the simple presence of water.

When Crocodile counters by draining all of the water from Luffy’s body, the Straw Hat captain utilizes his own blood as a source of water and proceeds to decisively put an end to the Shichibukai’s plans for Vivi’s homeland.

Similar to Luffy’s fight against Enel, the battle against Crocodile for the fate of Alabasta stands as a prime example of how excellent shonen fights can be when a reasonable strength ceiling forces both combatants to think outside the box.

Luffy and Crocodile are reasonably matched in terms of raw power at this point, which leads to a constant battle between the two to exploit the other’s weakness that makes the the fight unpredictable and gripping for audiences. 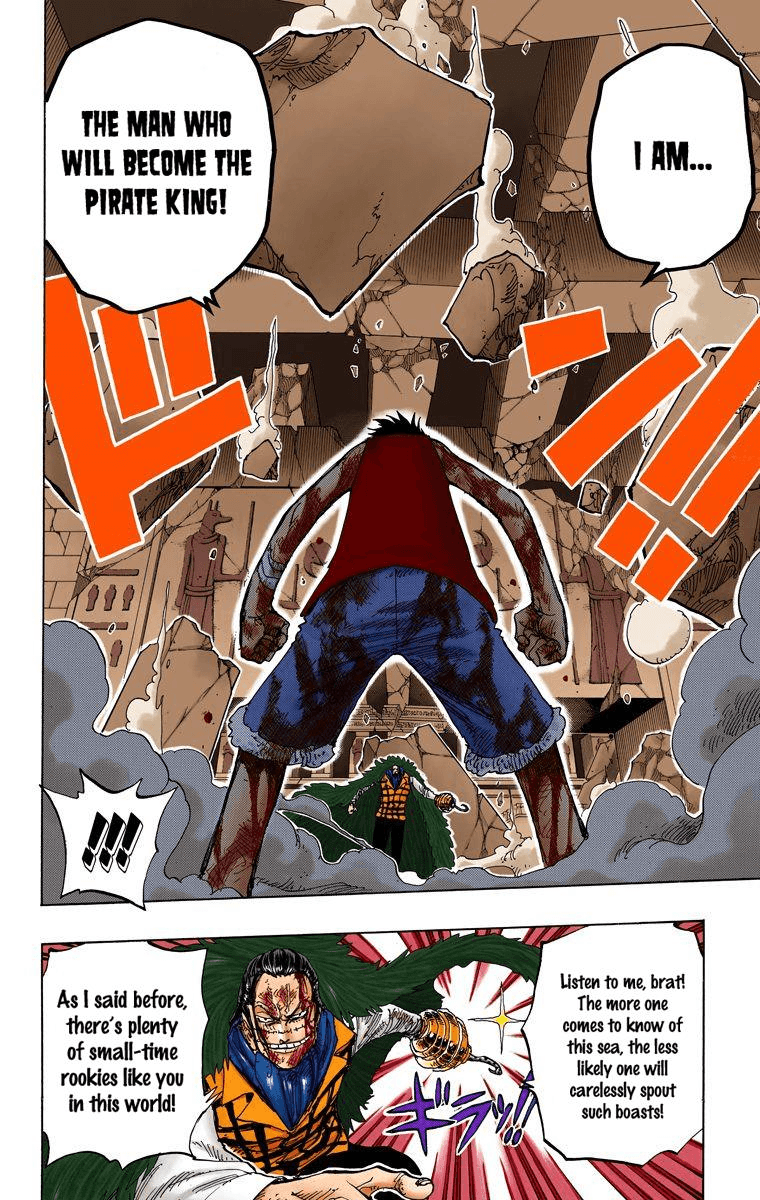 Unsurprisingly, this moment, wherein Luffy uses his own blood as an offensive weapon to attack Crocodile, cements their desert duel as one of the most memorable and raw showdowns of the entire series. 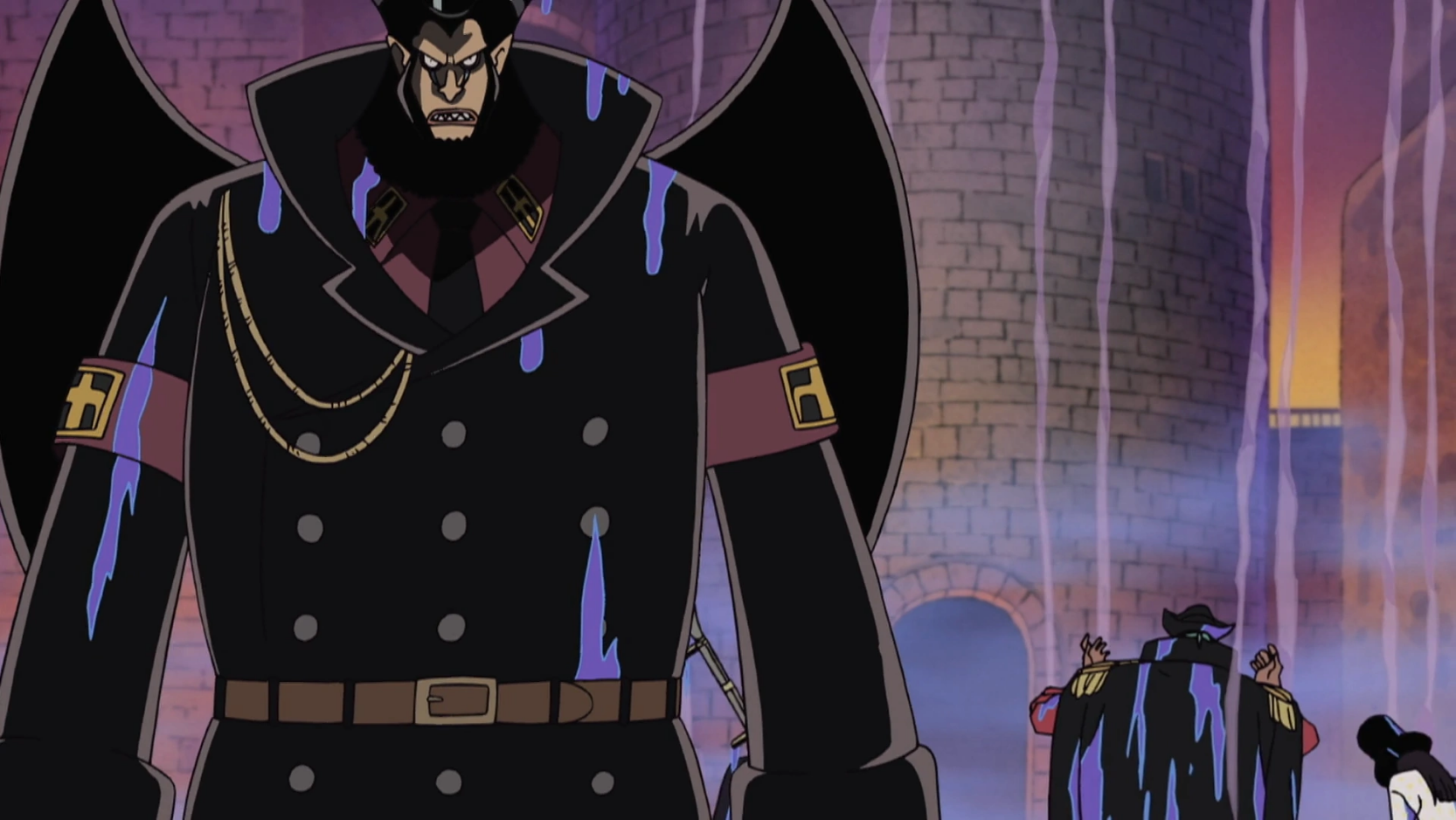 In the middle of his escape from Impel Down, Luffy’s path is blocked by the appearance of the prison’s warden, Magellan. Though their first round ends with Luffy near death after suffering a massive doe of poison from Magellan’s devil fruit powers, their second round is a fiery battle between two men whose lives depend on the outcome of the fight.

Though the monstrous Magellan is able to overwhelm Luffy and easily survive his attacks, he is ultimately defeated through a combination of Mr.3’s wax wall and Luffy’s Gomu Gomu no Giganto Stamp.

While Magellan may be considered a more minor villain, only being mentioned in passing and appearing on cover pages since the conclusion of his battle with Luffy, the Impel Down warden possesses one of the most dangerous and visually interesting devil fruit powers across the entire series. 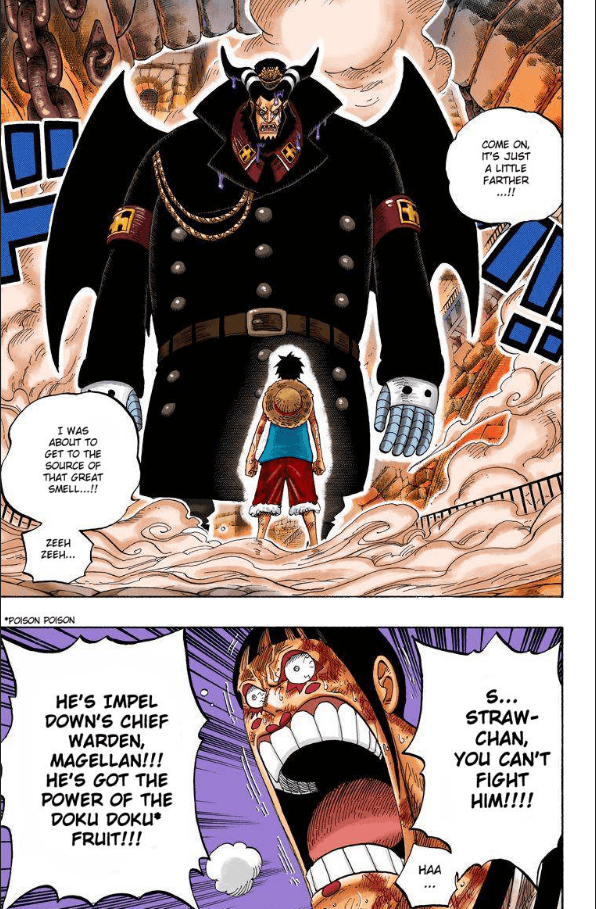 Luffy’s recovery after their first-round is also one of the most intense moments throughout his adventure, as his screams echo across multiple chapters and episodes during Ivankov’s attempt to heal him.

This fight stands not only as a display of both men’s ferocity and tenacity, but also marks the moment Luffy became much more than a mere ‘pirate’ to the World Government. 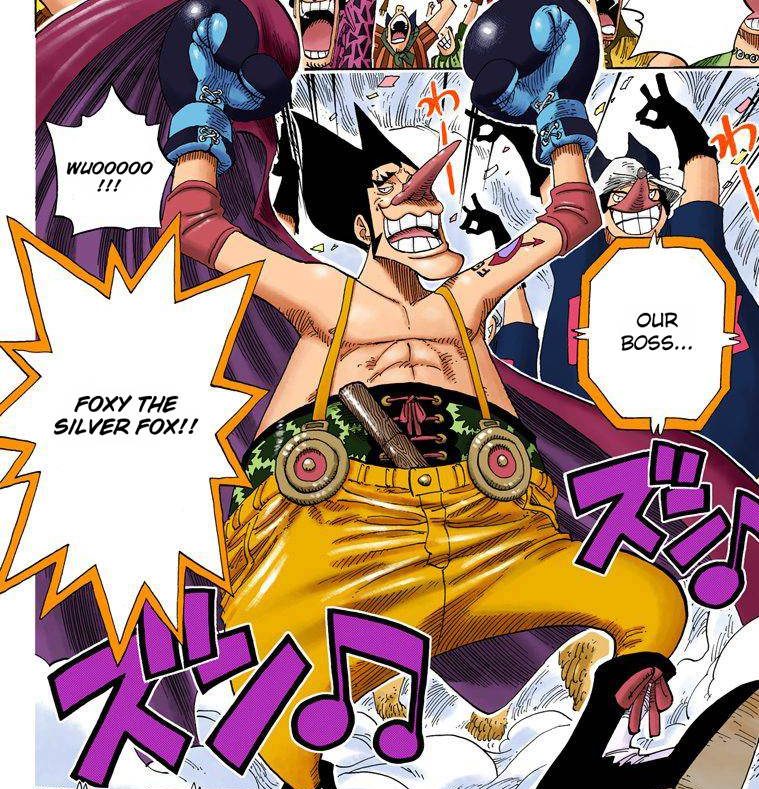 Upon their departure from Long Ring Long Land, the Straw Hats are immediately challenged to a ‘Davy Back Fight’ by Foxy, an antagonistic pirate captain. Rather than engage in straightforward combat, the Davy Back Fight sees teams of competitors battle for possession of their own crew members through a series of athletic challenges and games.

This fight is highly controversial among fans; manga readers generally view the Davy Back Fight as a small yet interesting moment in Luffy’s quest, while fans of the anime view it less favorably, most likely due to its drawn-out expansion to a total of fifteen episodes.

However, Luffy’s match against Foxy earns such a high-ranking simply because it’s fun. Rather than focus on the various devil fruit powers that exist across the sea, this showdown relies on the competitors’ sailing skills. This allows for a unique display of each crew’s mastery of the seas, which is rarely seen in the series, in a fashion that really hasn’t been matched in any way since.

Plus, it features the first and (so far) only appearance of Afro Luffy. 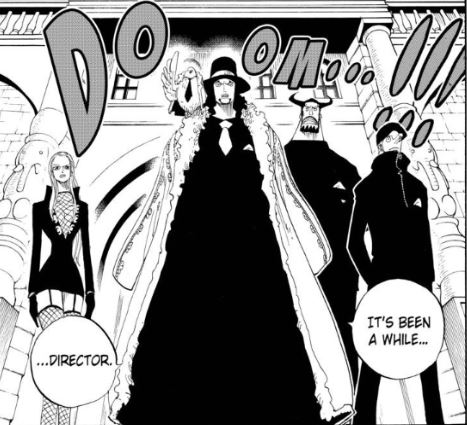 On the grounds of Enies Lobby, then-CP9 member Rob Lucci confronts Luffy and challenges him to a duel, seeking to prevent the Straw Hat leader from rescuing Nico Robin from the hands of the World Government and stopping the execution of a destructive Buster Call.

Despite being one of One Piece’s relatively early fights, Luffy’s knock-down, drag-out battle against the Leopard Zoan Fruit user remains the best one-on-one fight in the entire series, as both fighters pull out all the stops in a pure competition of strength and will. 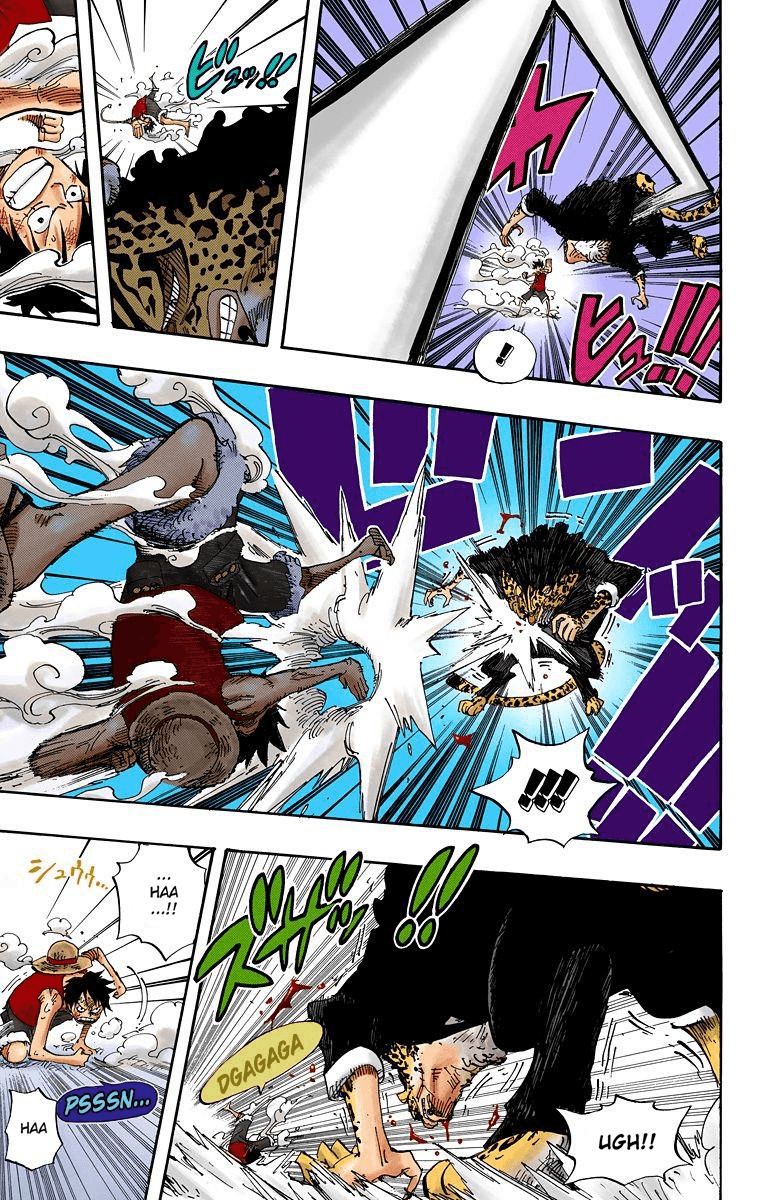 The fight features several twists and turns, as each fighter continually turns the table on their opponents by unleashing new techniques or transforming into new forms, which work alongside the tension added by the high stakes resting on Luffy’s victory to keep audiences invested and gripped to the edge of their seats. 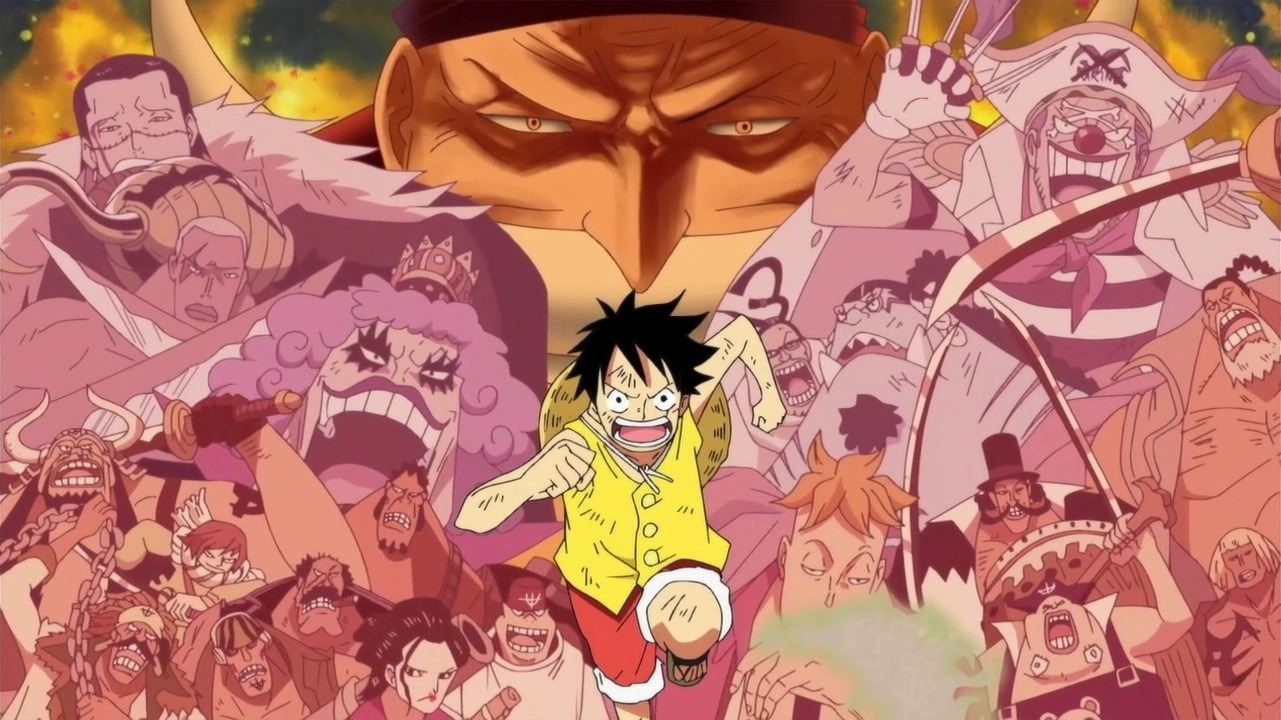 Shortly after appearing on Amazon Lily due to Kuma’s actions on the Sabody Archipelago, Luffy receives word that his brother, Ace, has been captured by the Marines and is set to be executed in one week’s time.

Upon arriving at the Marine stronghold of Marineford, Luffy discovers that Ace’s execution has become a battleground between the forces of the World Government and the numerous pirates who stand against them. 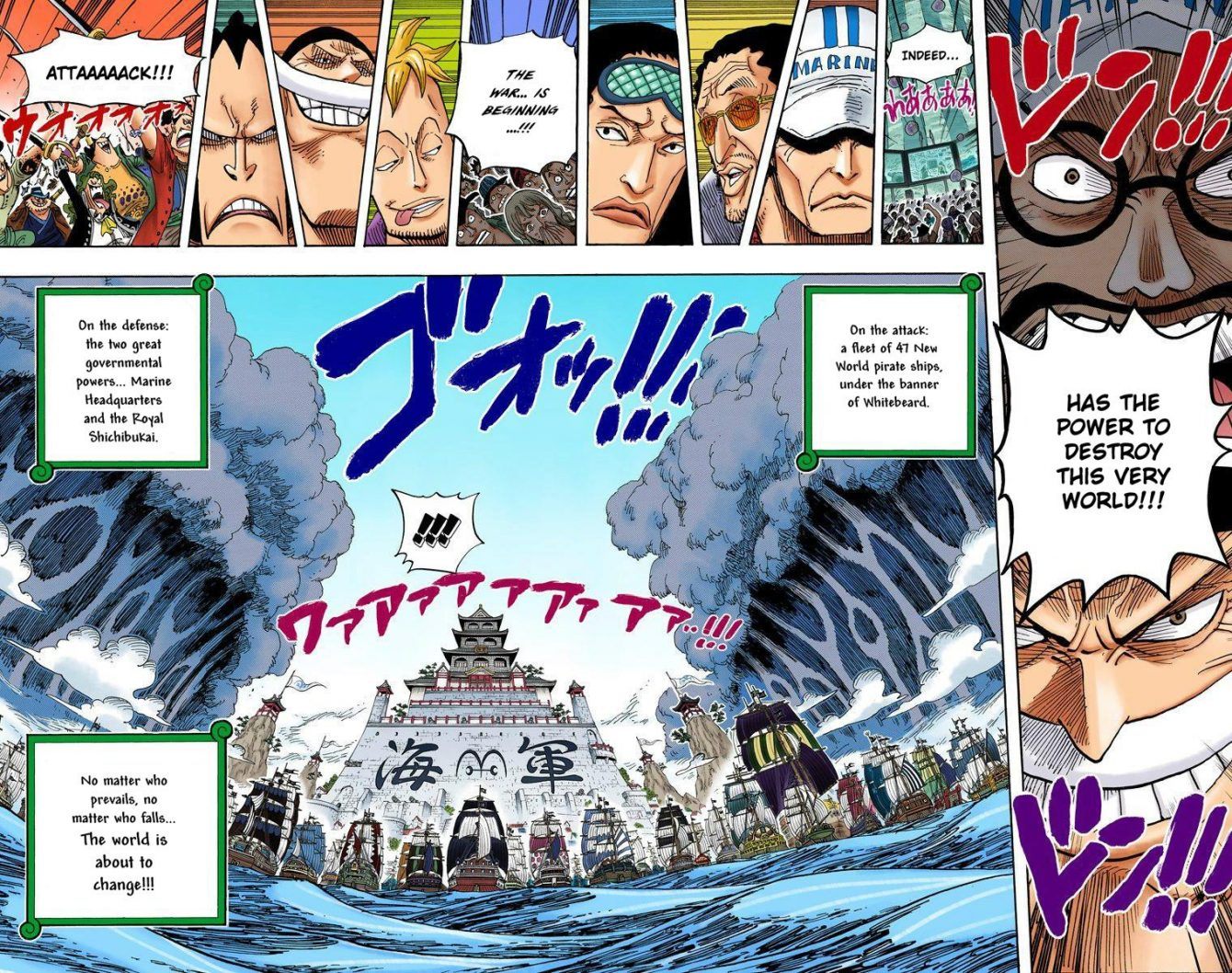 Marineford is easily the best fight in One Piece for a number of reasons. The large-scale battle features appearances from dozens of different characters both old and new, devil fruit powers are employed in new and dangerous ways, and the massive size of the conflict truly helps to give the reader a sense that the scope of this event reaches far across the world.

Most of all, this battle ranks number one for its heartbreaking and emotional conclusion, which has solidified the depth and calamity of the conflict in the minds of every fan since its original publication and airing.