The use of the term “trap” has become a widespread point of contention among Western Vtubers after its usage was allowed in a community Discord server. 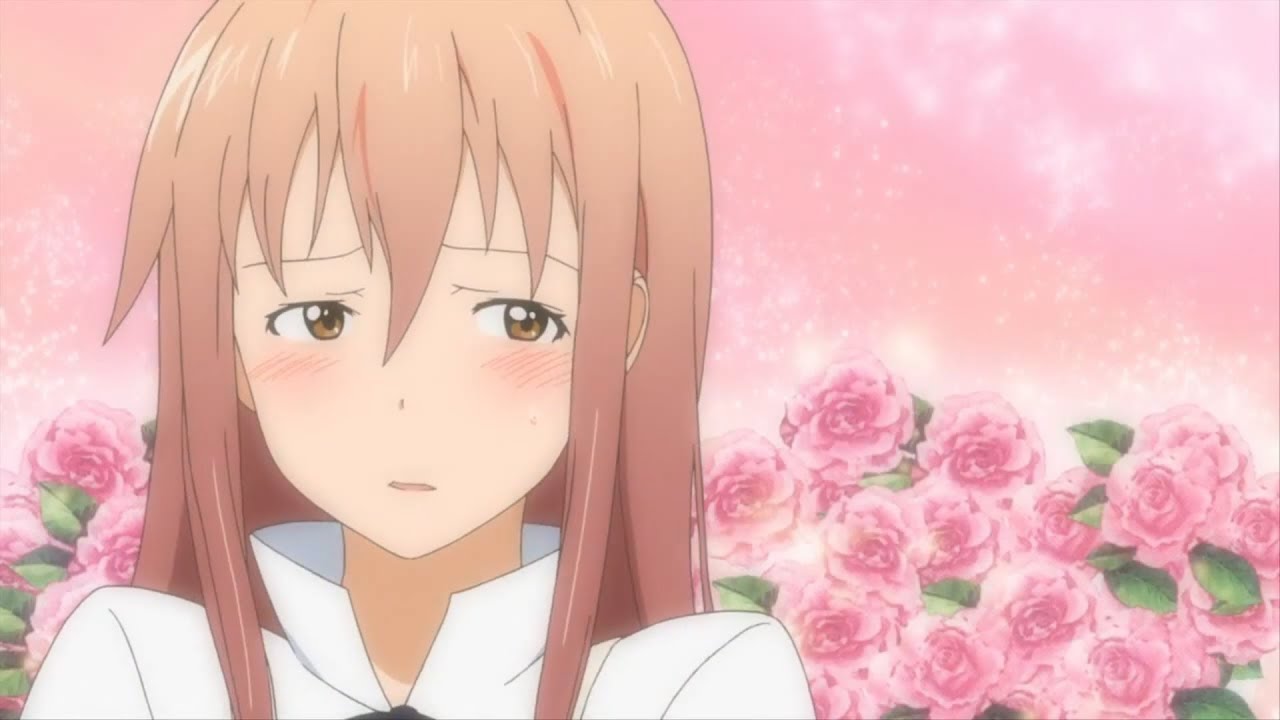 The controversy surrounding the term “trap” was first brought to the attention of the Western Vtuber community by Vtuber Riiri, who recently took issue with the term after she discovered that fellow Vtuber Domo “allows the word tr*p to be used” in” what she believed was “their personal Discord server”. 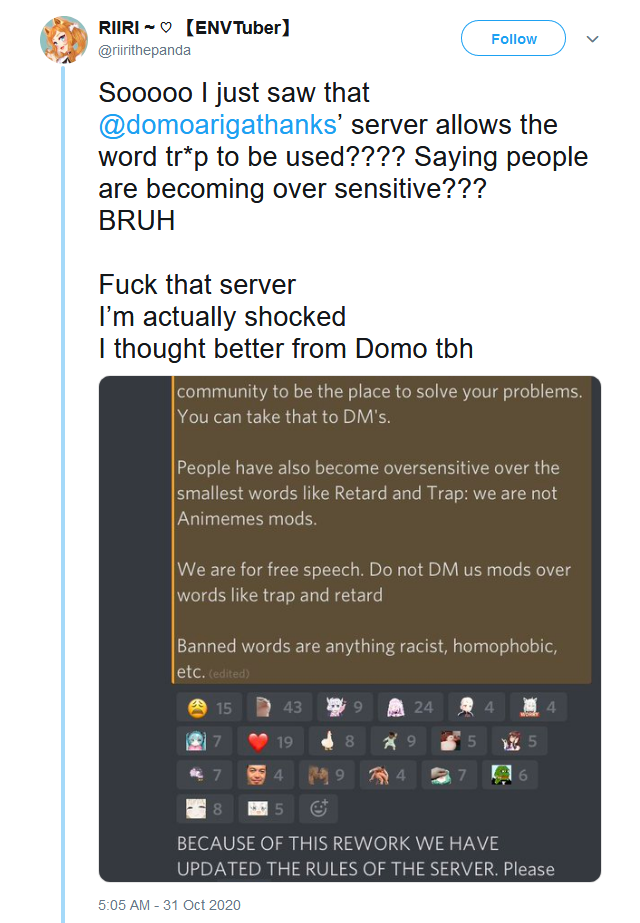 In an announcement posted in the accused Discord, a server mod specifically noted how “people have also become oversensitive over the smallest words like Retard and Trap”.

“We are not Animemes mods. We are for speech,” they clarified. “Do not DM us mods over words like trap and retard. Banned words are anything racist, homophobic, etc.” 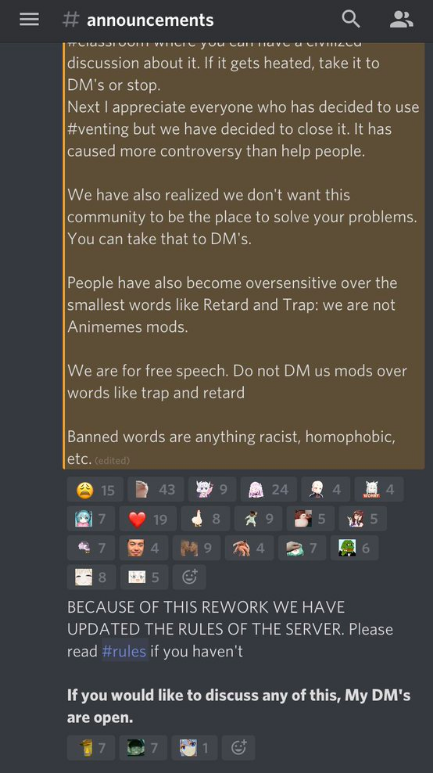 Following Riiri’s initial tweet, numerous other Western Vtubers took to their personal Twitter accounts to express their disgust towards the term’s general use and criticize Domo for the alleged rules of his server.

“The word “trap” reflects a horrible real life mentality that often gets trans people killed,” claimed @CheekinNuggets. “I’m pretty sure that I’ve made it abundantly clear with my posts in the past, but transphobia is absolutely NOT welcomed in my community or in my circle in any way.” 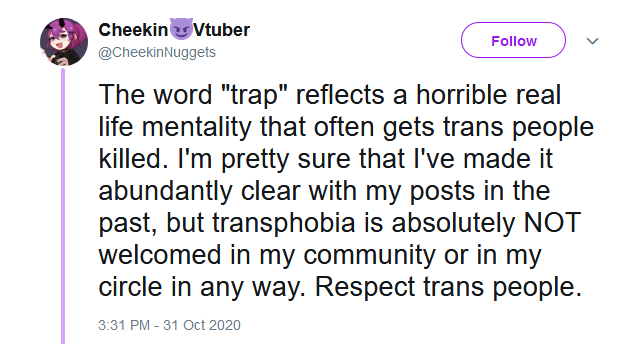 @Aurora_The_Ram similarly accused the “The ‘trap’ meme” of originating “from a stereotype that trans women are not real women and are only trans to trick men into sleeping with them” and declared that “the word is derogatory no matter how its used.” 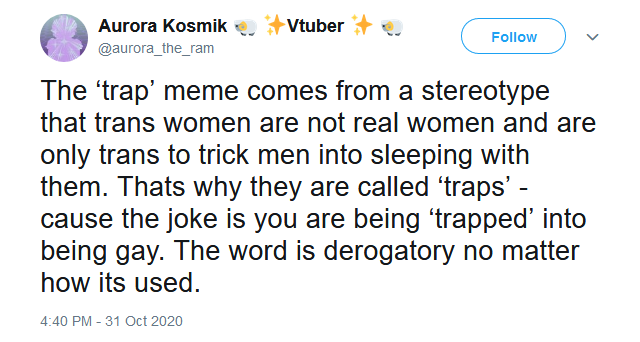 “If you use the word “trap” then you’re a f—ing idiot who needs to reassess your life” ordered @TyraKage before ironically asking others not to “say bad things about people, there is already too much hate in this world for that.” 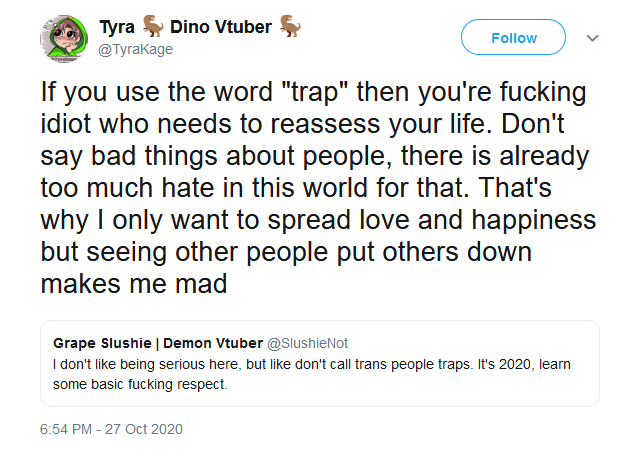 As previously noted in Bounding Into Comics’ coverage of the attempt by /r/Animeme mods to ban the use of ‘trap’ from the subreddit , ““Trap” does not reference characters who are actively attempting to “trick” others into being attracted to them, but rather words of caution to one who may espouse attraction to an androgynous individual, not knowing that the ‘trap’ is the opposite gender than what they are sexually attracted to.”

Although it is commonly claimed that the term originated as a derogatory slur against transgender individuals, the term’s first recorded use in this context was seen in 2010, when the /r/traps subreddit noted on its sidebar that “/r/traps is for the posting of photos and video of young and beautiful trans girls and individuals who would love to trap! Content can be from/of anyone as long as they’re passable [and] feminine.” 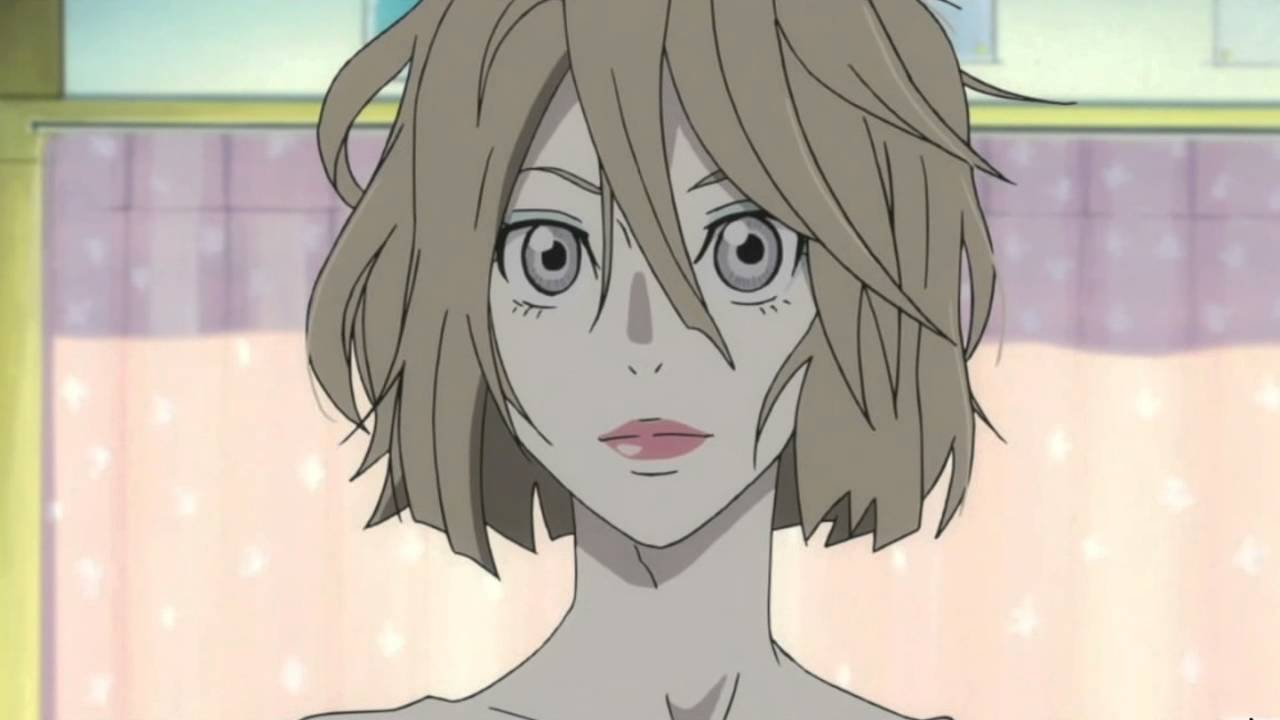 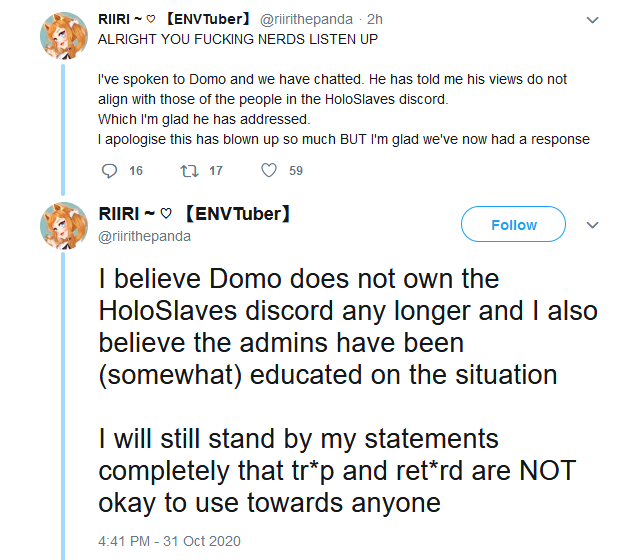