Anne Hathaway has issued an apology for her depiction of her character in the HBO remake of ‘The Witches’ following a wave of backlash from “limb different” individuals who took offense to the character’s three-fingered design. 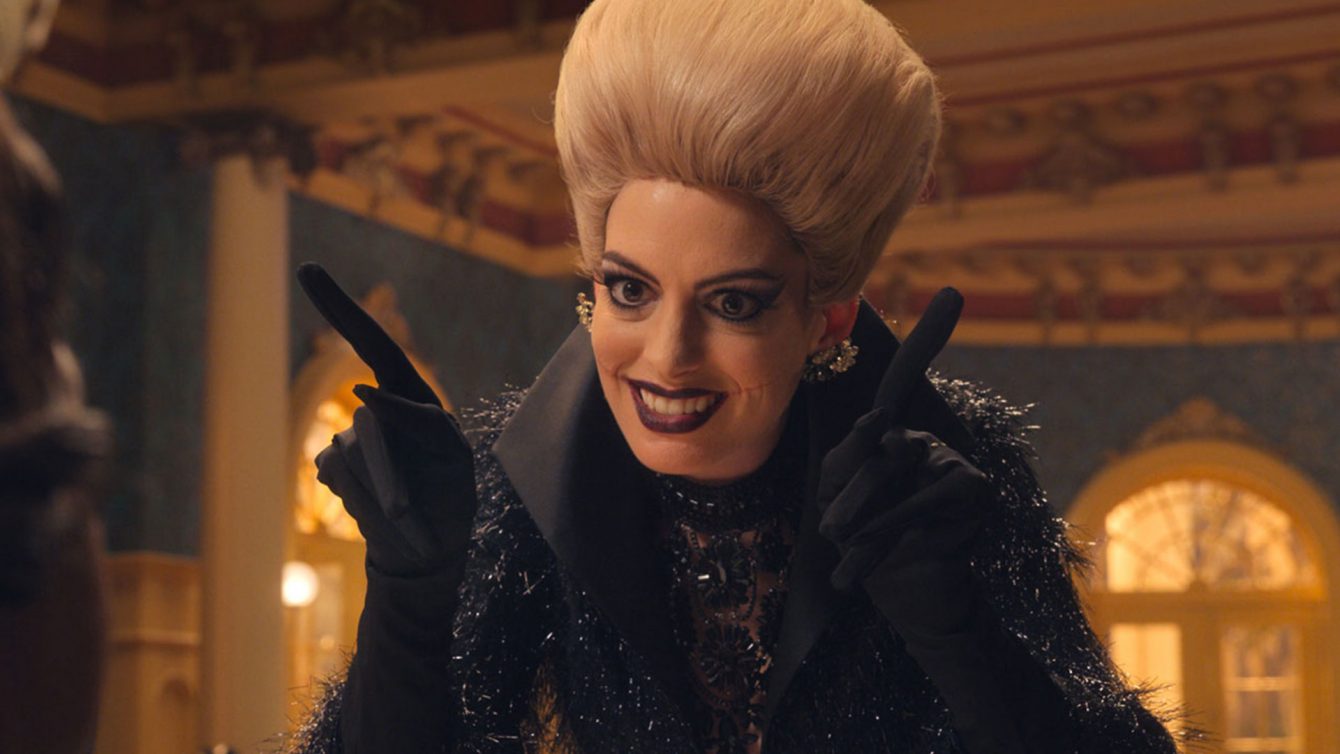 A remake of the 1990 film by Nicolas Roeg and Jim Henson, itself based upon Roald Dahl’s 1983 book of the same name, The Witches follows a young boy and his grandmother as they attempt to stop a group of child-hating witches after accidentally discovering the witches’ plan to transform the world’s children into mice.

In the remake, Hathaway’s version of the Grand High Witch is depicted with hands bearing only three fingers apiece, similar to the real-world congenital disorder ‘ectrodactyly’, in an attempt to visually reinforce her ‘monstrous’ nature 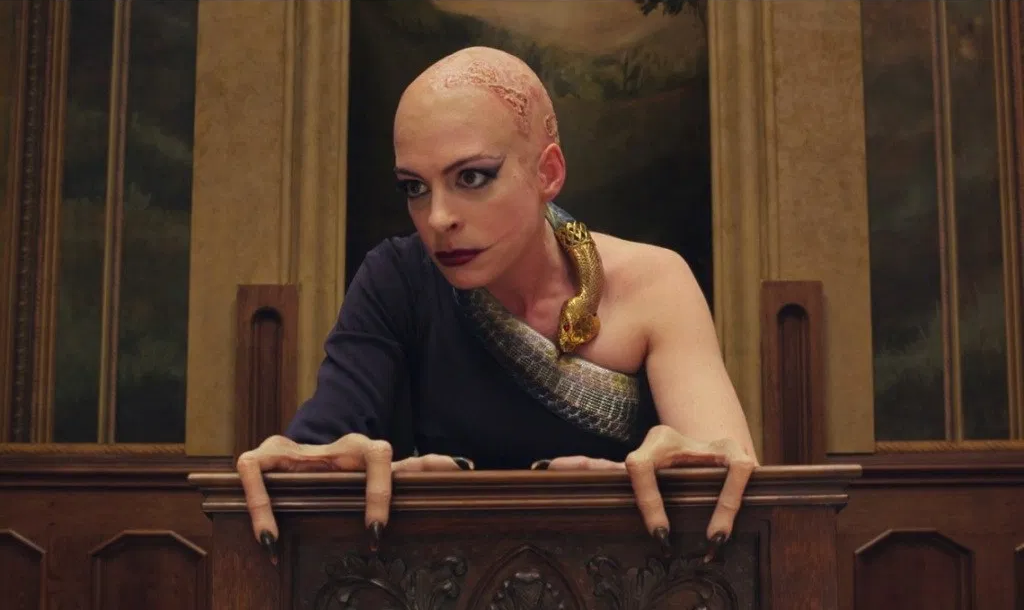 In an illustrated guide on “How to Recognise a Witch,” published in the original book, Dahl describes the various, horrific traits seen amongst witches, particularly noting that witches had “claws hidden by gloves.” 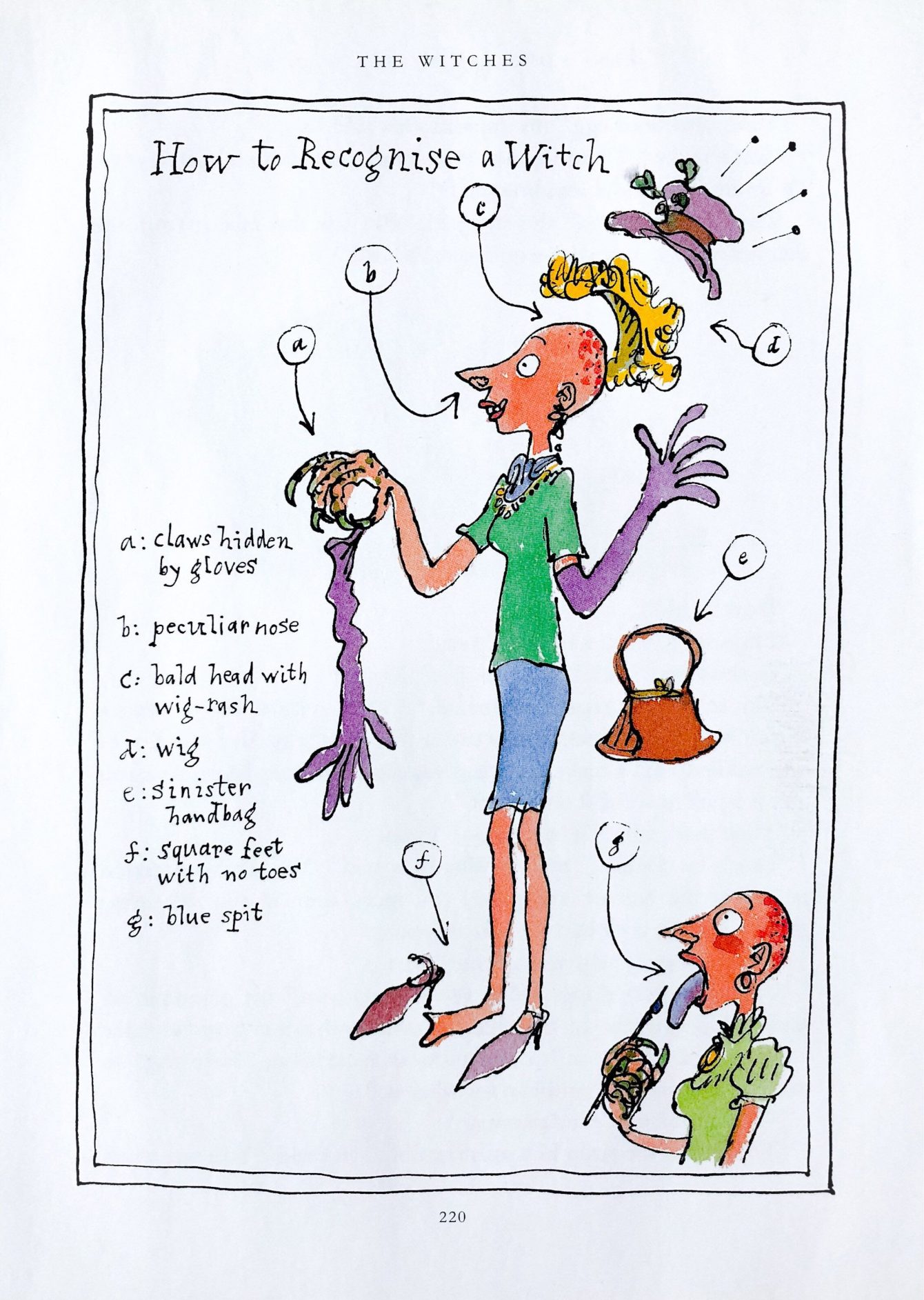 However, following the film’s premiere on October 22nd, the film found itself under fire from advocates for the disabled community who believed that the Grand High Witch’s appearance would lead real-world audiences to view individuals living with ectrodactyly and other disabilities as ‘monsters.’

I am fully aware that this is a film, and there are Witches,” said Marren in a statement attached to the tweet. “But Witches are essentially monsters. My fear is that children will watch this film, unaware that it massively exaggerates the Roald Dahl original and that limb differences begin to be feared.” 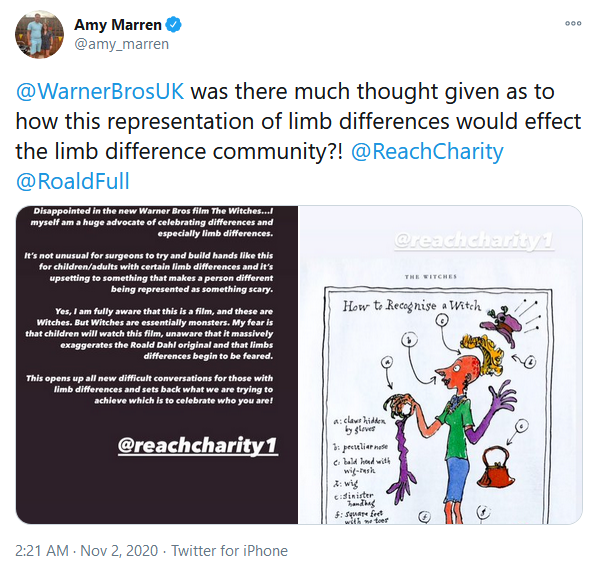 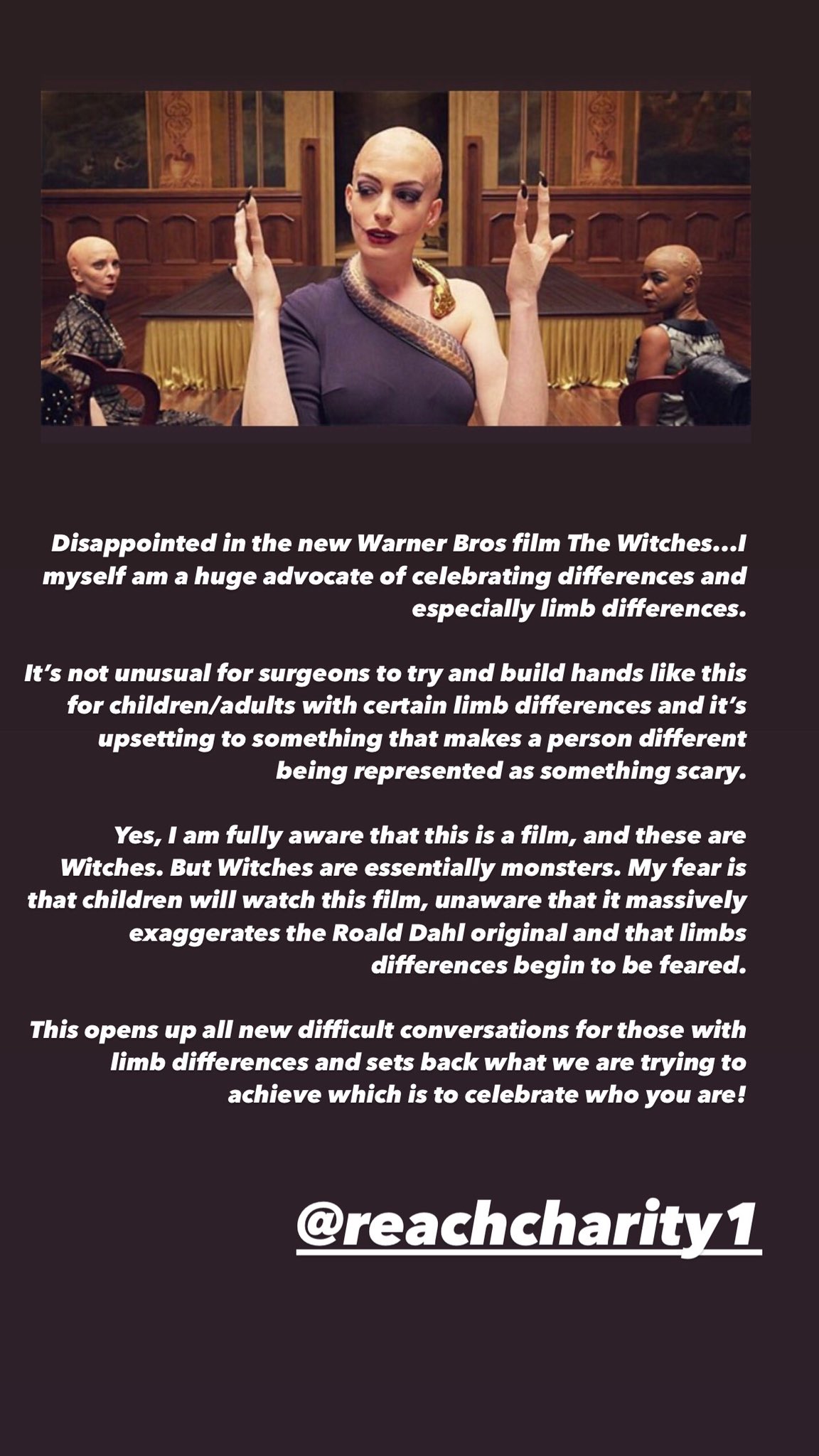 English journalist and comedian Alex Brooker, himself born with deformities in his hand, arm, and leg, wrote in an Instagram story that “as someone with missing fingers, it’s made me so sad to see how this is portrayed as something to be scared of in the remake of The Witches.”

“I’m know [sic] it’s just a film, but I want disabled kids to celebrate who they are, not feel like they have the same hands as a fictional monster,” he concluded. 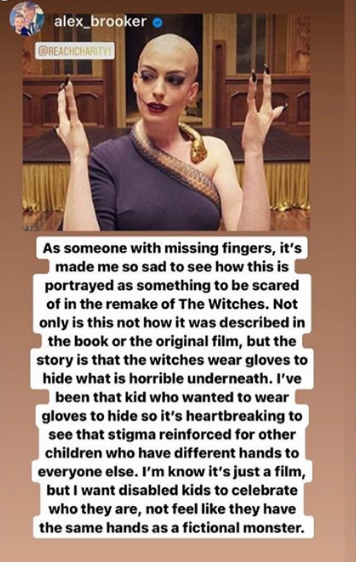 The backlash eventually spawned the hashtag #NotAWitch, in which various individuals with deformities or disabilities published photos of themselves in an attempt to prove that those with such limb differences were not ‘monsters.’

Twitter user @Shannoncrosslan declared that the appearance of Hathaway’s hands as a way “to enhance the characters frightening image” was “NOT acceptable.” 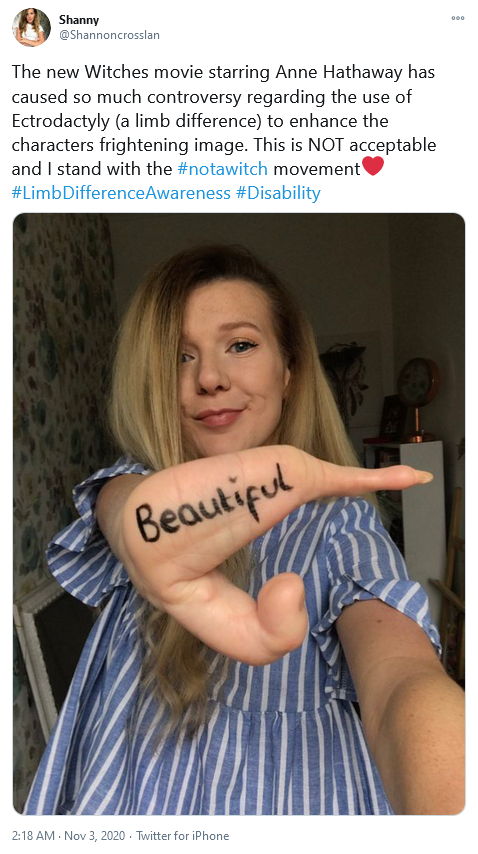 “Why do u think it’s ok 2 exploit a disability and not see the pain it causes to people suffering from this disability” @may_medic asked Warner Bros’ UK Twitter account. “A bs apology is not enough I’m proud of who I am but wrongful representation just should not be okay in 2020” 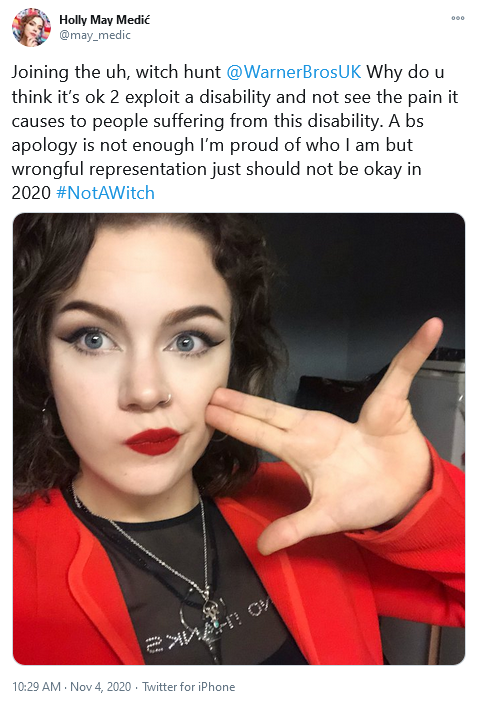 “Limb difference is not scary,” wrote the official Twitter account for the Paralympic Games. “Differences should be celebrated and disability has to be noramlised.” 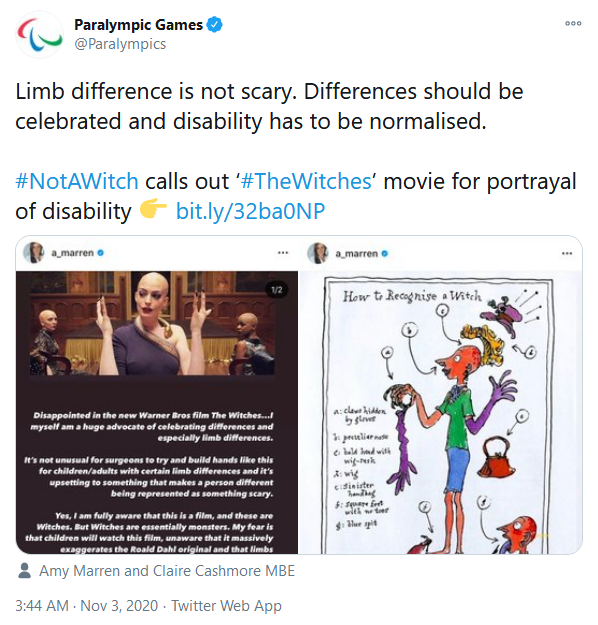 In a statement released immediately following the backlash, Warner Bros. stated that they were “deeply saddened to learn that our depiction of the fictional characters in THE WITCHES could upset people with disabilities, and regret any offense caused”, and noted that Hathaway’s triple-digit hand was designed as “a new interpretation of the cat-like claws that are described in the book.”

“It was never the intention for viewers to feel that the fantastical, non-human creatures were meant to represent them,” explained Warner Bros. “This film is about the power of kindness and friendship. It is our hope that families and children can enjoy the film and embrace this empowering, love-filled theme.” 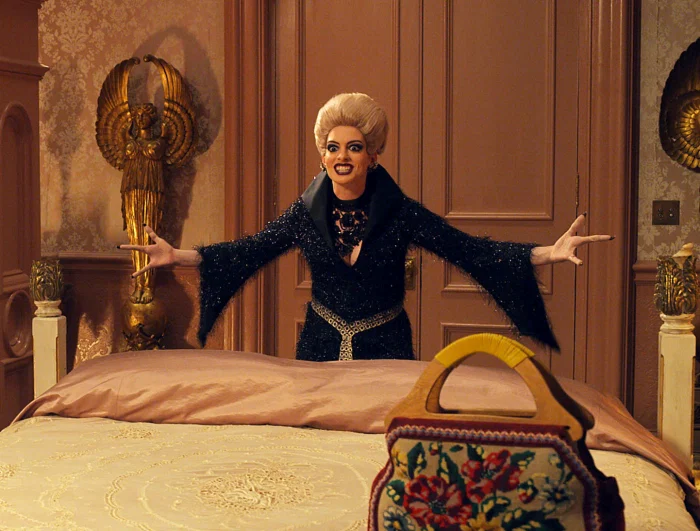 Hathaway would later follow Warner Bros’ statement with an apology of her own, taking to Instagram to share a video produced by the Lucky Fin Project, a “nonprofit organization that exists to raise awareness and celebrate children and individuals born with symbrachydactyly or other limb differences”, and explain that she “recently learned that many people with limb differences, especially children, are in pain because of the portrayal of the Grand High Witch in The Witches.”

“Let me begin by saying I do my best to be sensitive to the feelings and experiences of others not out of some scrambling PC fear, but because not hurting others seems like a basic level of decency we should all be striving for,” Hathaway said.

She added, “As someone who really believes in inclusivity and really, really detests cruelty, I owe you all an apology for the pain caused. I am sorry. I did not connect limb difference with the GHW when the look of the character was brought to me; if I had, I assure you this never would have happened.”

The actress would conclude her statement by stating that she “particularly” wished “to say I’m sorry to kids with limb differences”.

“Now that I know better I promise I’ll do better,” Hathway promised. “And I owe a special apology to everyone who loves you as fiercely as I love my own kids: I’m sorry I let your family down.”

What do you make of Hathaway’s apology? Do you think the three-fingered design of the Grand High Witch is problematic?