Attack on Titan has once again found itself under fire, this time by fans on Twitter, who have revived accusations that the series is nothing more than anti-Semitic and fascist propaganda. 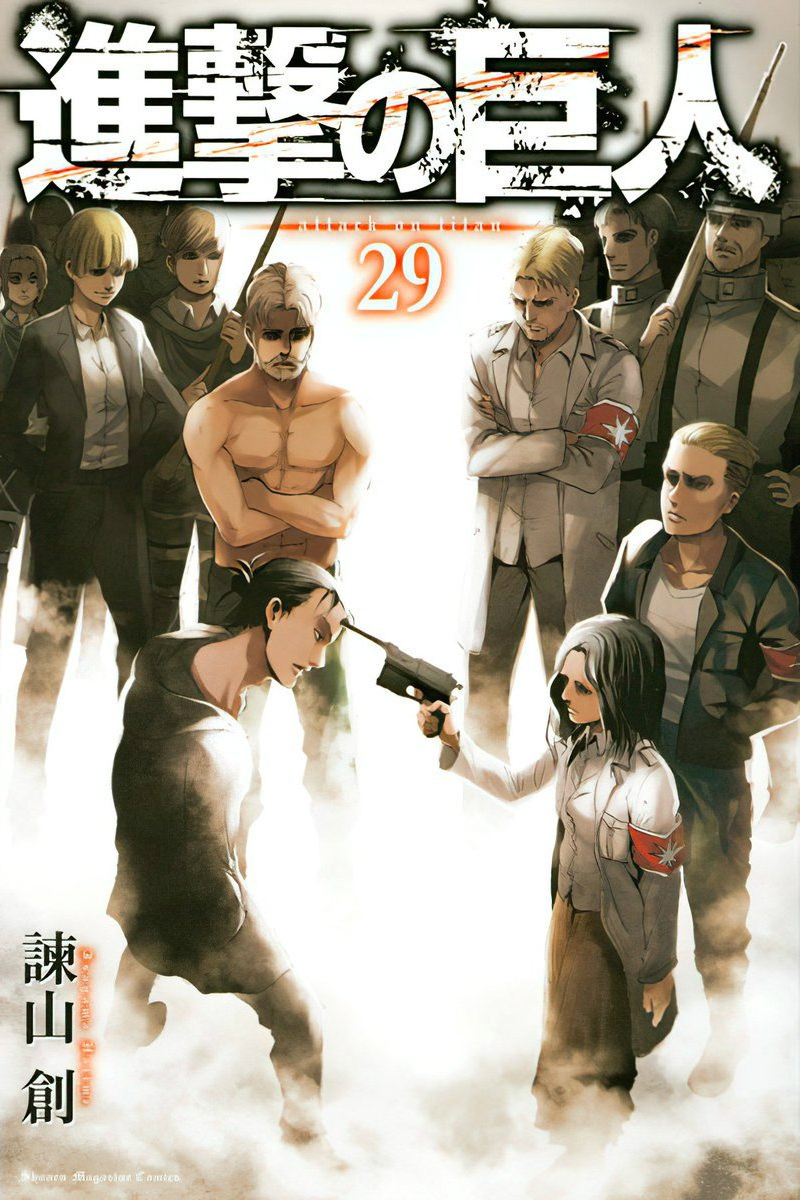 On November 24th, Twitter user @NYAKUTAGAWAS posted a thread promoting “no nuance november anime edition,” an anime-themed spin on a social media trend which asks users to post their honest and straight-forward opinions on certain topics.

Among the tweets was one presenting Attack on Titan for opinion, which near immediately garnered an overwhelming amount of responses accusing both the series and mangaka Hajime Isayama of promoting anti-semitism and fascist attitudes. 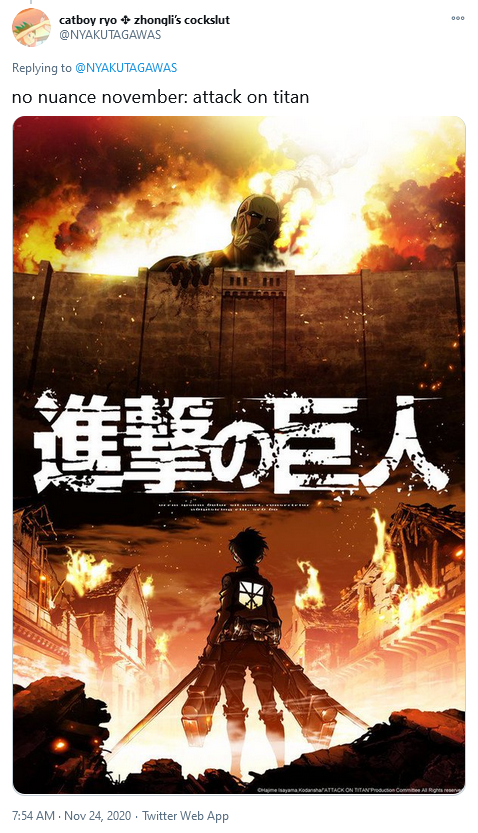 @contrastingpen shared their opinion that “this anime sucks primarily because the author is antisemitic and reflects said antisemitism in this show/manga,” and added that “the first season was just generally boring as s*** and i couldn’t get past episode 11.” 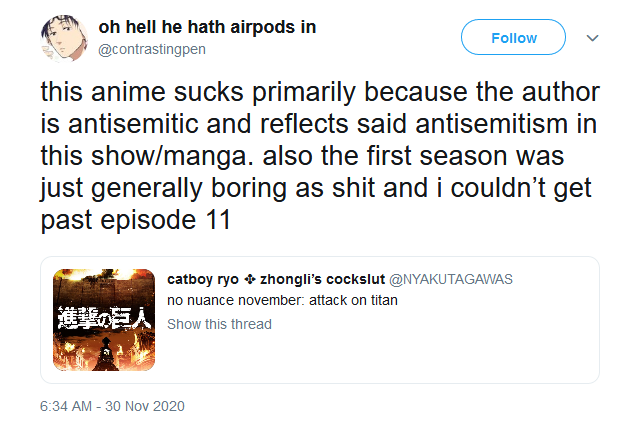 “this s*** is fascist propaganda and people STILL act like thats not a problem lol,” wrote @puzzleships. 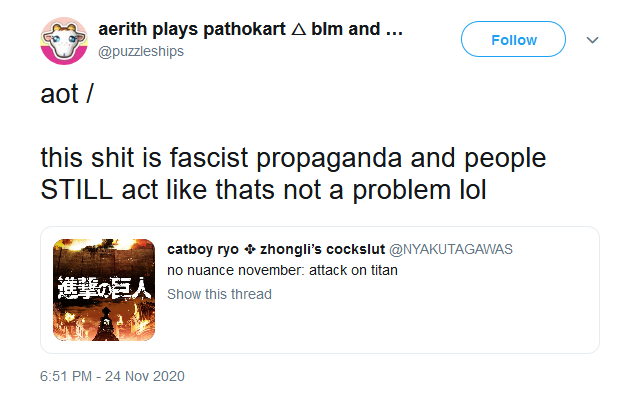 @nenbeast claimed that the series was “dumb trashy fun until erwin’s death then boom antisemitism misogyny homophobia the whole package” and shared their desire “to email isayama ‘please dont ever write or think of ideas.'” 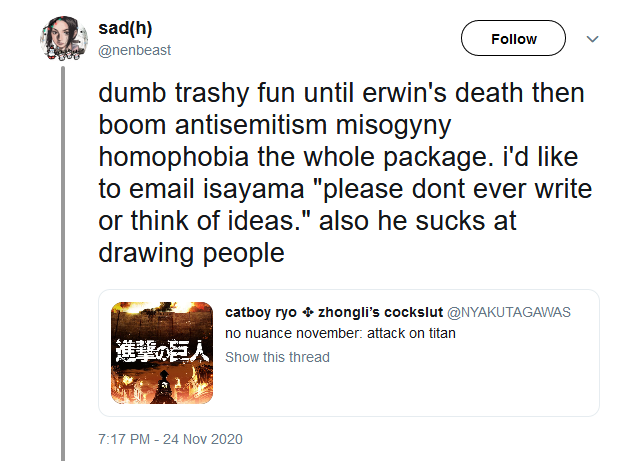 One user, @karlmarxapika, felt so strongly that the series promoted such themes that they wished they “could go back in time and convince Isayama’s mom to abort him.” 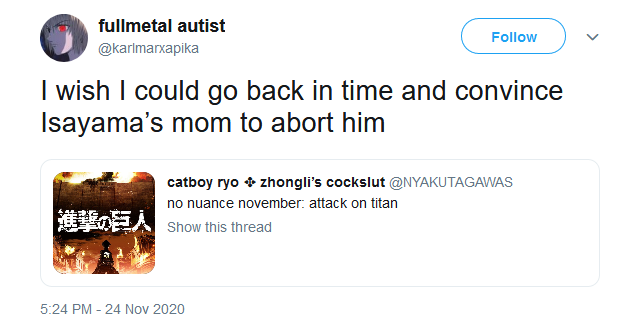 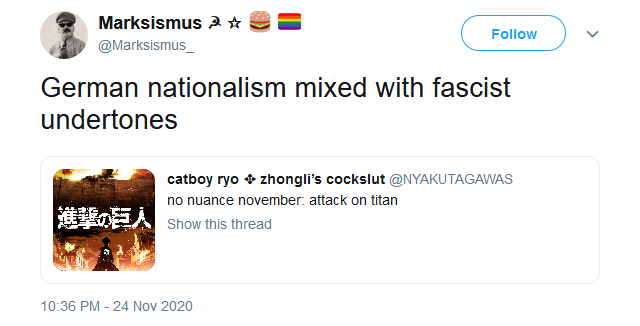 In response to fans sharing their positive feelings towards the series, @starrybutch accused them of wanting to “watch imperialist propaganda so bad it makes you look stupid.”

These accusations towards Attack on Titan are nothing new, as the series has been a popular target for similar interpretations for some time.

In support of their claims of fascism apologia, critics often point to how the series portrays the oppression of the Eldian people, which parallels the treatment of Jews during the real-world Holocaust of World War 2, the author’s own nationalist sentiments, as seen in his apparent downplaying of Japanese war crimes, and the influence of German and Japanese militaries on the visual aesthetics of the series’ military forces, particularly in how Dot Pixis is directly based on Imperial Japanese Army general Yoshifuru Akiyama. 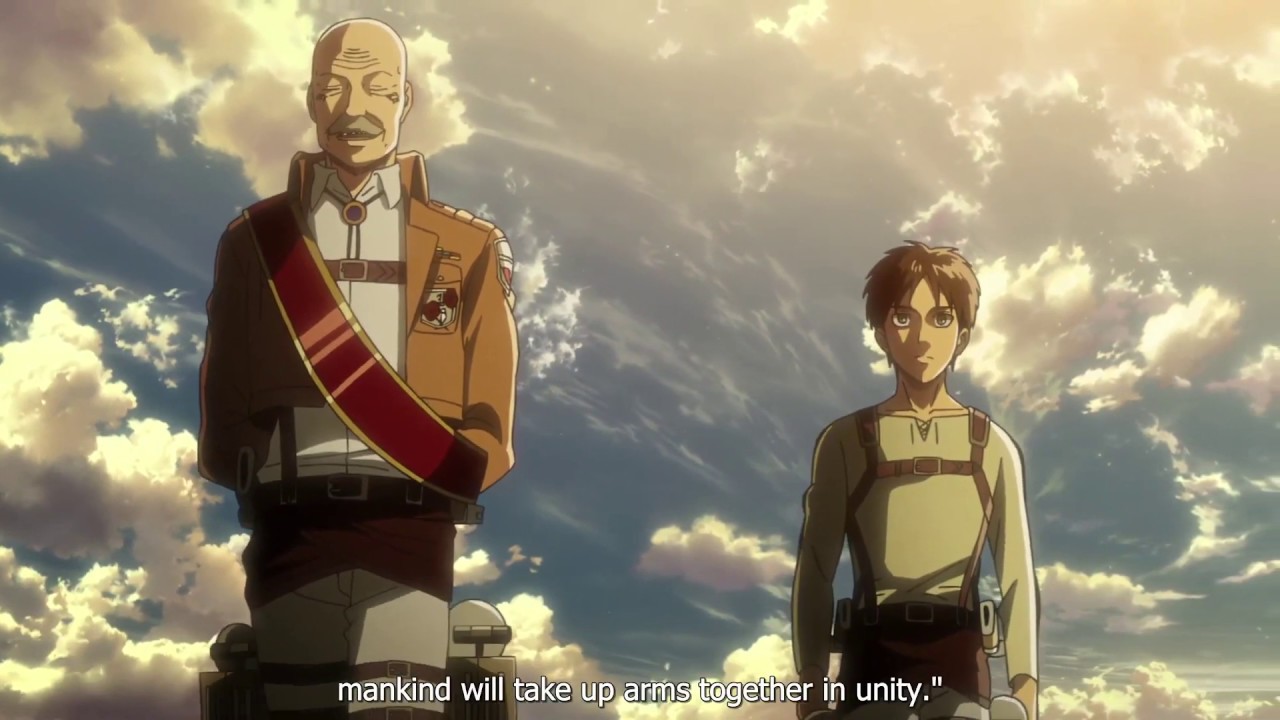 The accusations of anti-Semitism similarly stem from the plight of the Eldian people, whose aforementioned oppression leads to them being forcibly transformed by King Karl Fritz into the monstrous and eponymous Titans, whose monstrous appearances critics claim reinforces offensive caricatures of Jewish peoples. 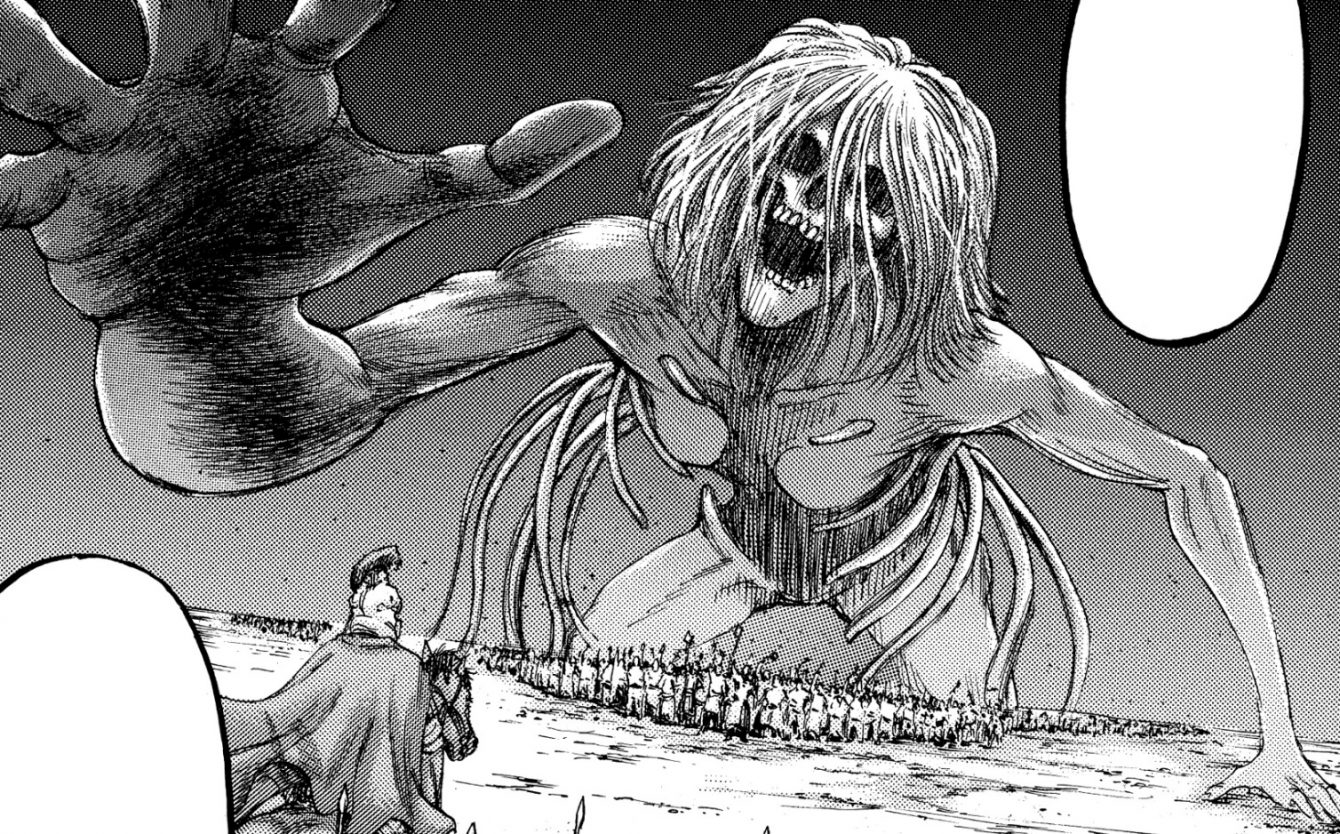 However, Isayama’s personal political opinions aside, as the series does not itself specifically speak to any of these issues, these criticisms routinely ignore how not only are the Eldian people portrayed as the heroes of the story, with their struggle against the Marleyans portrayed as a justified battle against their oppressors, but also that the xenophobia and fear that led to their horrific treatment is considered to be an atrocity both in-universe and by readers.

As written by Bounding Into Comics in 2019, “While the Eldians do in fact face constant bigotry due to their heritage and it is apparent that the dynamic between the Eldians and the Marley government draws many parallels with the fascistic treatment of the Jewish people in Nazi Germany, to call the series anti-semitic speaks to a grossly misinterpreted and binary view of the story.” 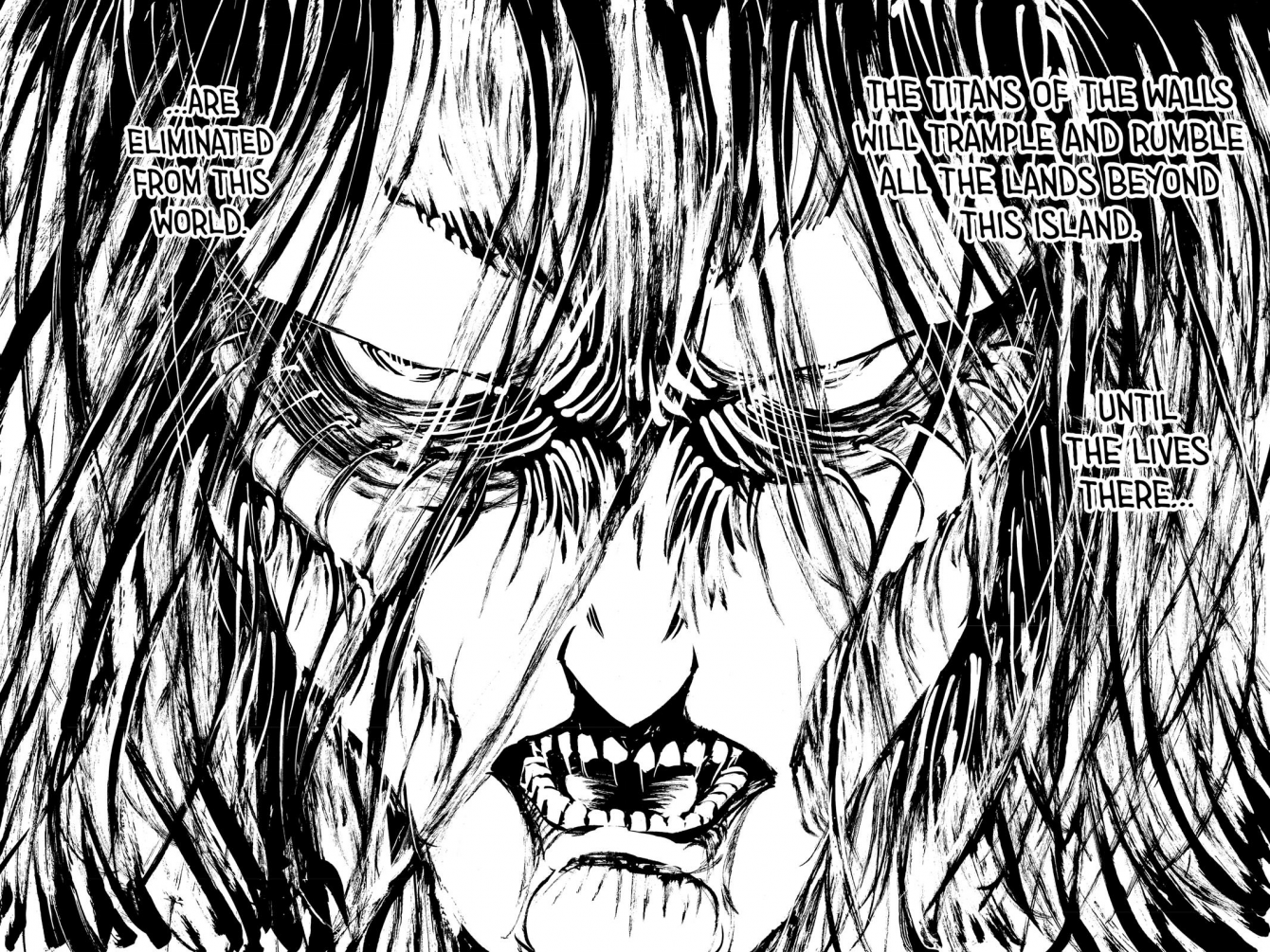 What do you make of these accusations against Attack on Titan? Let us know your thoughts on social media or in the comments down below!