David Bowles, the award-winning, self-identified ‘latinx’ young adult author of such books as Feathered Serpent, Dark Heart of Sky: Myths of Mexico and The Unicorn Rescue Society: The Chupacabras of the Rio Grande, recently voiced his utter contempt towards the idea of young students studying ‘literary classics.’ 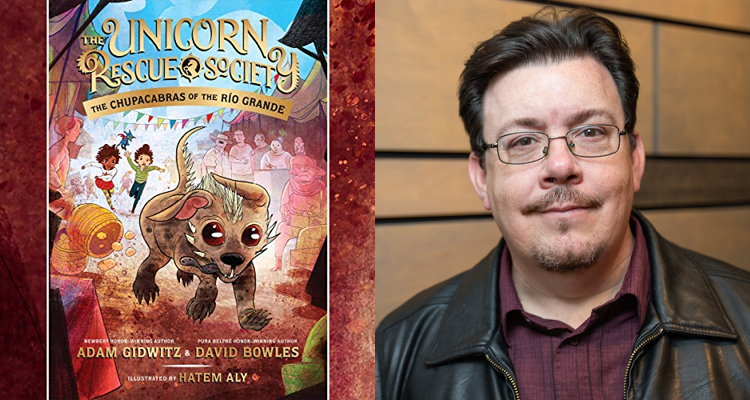 Related: Lucasfilm and Kathleen Kennedy to Produce Adaptation of “Anti-Police” YA Novel Children of Blood and Bone

On November 30th, Young Adult author Ellen Oh, founder of the #WeNeedDiverseBooks social media campaign, sparked a new round of discourse around the literature taught to children in schools, suggesting that “this year, we should do a WORST CLASSIC BOOKS EVER list and why they should not be taught in K-12 schools anymore because they legit cause kids to hate reading.”

Oh, leading by example, then proceeded to voice her very brief thoughts on books such as Moby Dick, The Adventures of Huck Finn, and The Canterbury Tales.

Of these examples, Oh claimed that Moby Dick “literally kills brain cells.” She went on to state that The Adventures of Huck Finn is racist asking, “Can we stop with racist books already?”

As for The Canterbury Tales she simply asked, “WHY? WHYYYYYY?” 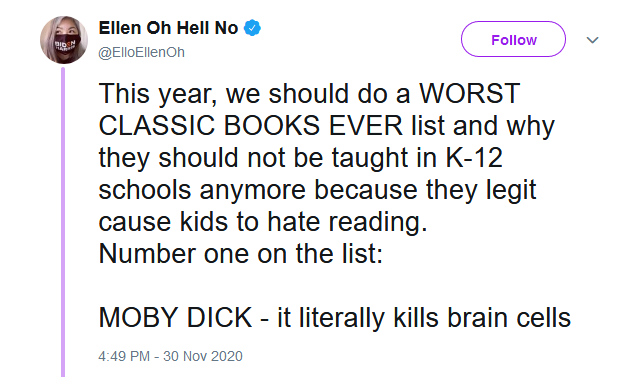 In response to Oh’s tweets, opponents argued that her surface level takes ignored the nuances of a respective book’s importance to Western canon, while supporters took her ideas a step further and began suggesting potential replacements for these works in educational curricula, of which an overwhelming majority were more contemporary Young Adult novels.

At current, it’s not clear what particular sentiment or argument set Bowles off, but as result of the ongoing debate, the author launched into a profanity-laced, self-aggrandizing, multi-tweet Twitter rant, beginning with a claim that “Nobody with a s****y, reactionary, regressive take on the classics in the classroom today…actually knows a GODDAMN THING about literacy or the point to English instruction in public schools.” 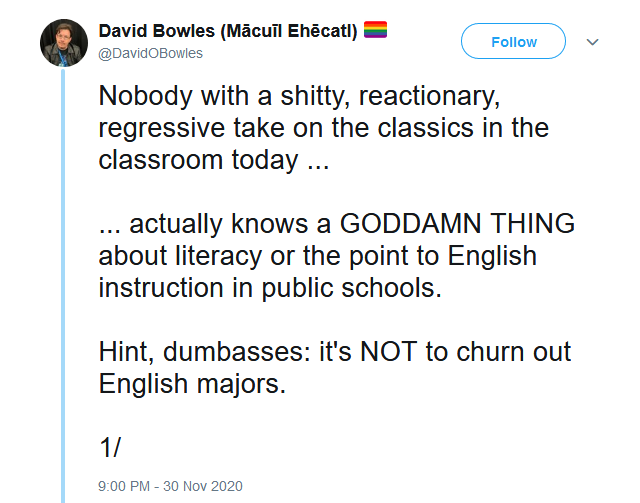 Bowles began by stating, “We teach English to foster reading & writing in young people’s lives, to guide them to mastery of skills they really need, to instill in them a love for and ability to use written language that will last them a lifetime,” before asserting that “We don’t need the old books y’all fools love for that.”

“In fact, studies have shown repeatedly that forcing kids to read work well outside their zone of proximal development, books that have no relevance to children’s lives, actually HAMPERS their literacy,” he further argued. “It raises their affective filter, turning them AGAINST reading & writing.”

The author then wrote, “This is especially true for children from communities of color, where different dialects of English or different languages may be the principal means of communicating.”

He added, “Literature that isn’t even written in the PRESENT-DAY VERNACULAR / TARGET DIALECT consigns them to failure.”

Related: Record of Lodoss War Author Fears “A Future Where All My Books Will Be Banned” Following Netflix’s Removal of Community D&D ‘Blackface’ Episode

It is at this point that Bowles’ thread takes a turn for the more extreme, as the author dropped any pretense of making a cohesive argument in favor of vulgarly insulting those who disagreed with him, stating “THERE IS NOTHING INHERENTLY IMPORTANT ABOUT YOUR GODDAMN FAVORITE CLASSICS.”

“Have you read THE TALE OF GENJI? JOURNEY TO THE WEST? POPOL VUH? RAMAYANA? NO? Then please shut the f— up,” cried Bowles. “You know a tiny f—ng SLIVER of the world’s literature, ignorant asshole.”

Bowles then proceeded to, like a cartoon supervillain, berate his critics and boast of his credentials, informing the “disgusting worms” that he could “read in TWELVE DIFFERENT LANGUAGES and had “a MA in English and a doctorate in Education” and that they were “not my level, trust me.”

“So take a MOTHERF—ING SEAT & leave my people alone,” ordered the author, presumably referring to either supporters of YA curricula or authors of YA material.

It soon became apparent that public opinion towards contemporary YA fiction is a sore spot for Bowles, as he declared that “Your supercilious, privileged, frankly RACIST tirades against middle-grade and young-adult literature come from a place of DEEP IGNORANCE about the books that have been written over the past 30 years by writers that could MOP THE F—ING FLOOR with your out-dated a***s.”

In a further unintentional parody of a Golden Age supervillain, Bowles then asserted that “The teachers you’re attacking? Fools, they KNOW PEDAGOGY,” and as such “understand that their job is to TEACH KIDS TO READ, deeply and critically, and then to set those kids free in the world to dive into the books THEY choose, not what your simple-minded adherence to custom dictates.”

“YOU want your own children to read the classics?” asked the author. “Buy those books for them. Read them with them, like you do whatever scripture you hold dear. Ain’t nobody stopping you, friends.”

“But this pearl-clutching and browbeating? It needs to stop. You look petty, cruel, small,” he observed. “Especially when you propose we force the canon on children from oppressed, under-represented groups.”

“They need literacy, not to conform to your egregiously backwards notions of literary quality, BUT TO  LIBERATE THEMSELVES FROM PEOPLE LIKE YOU!!! Written language is a tool.”

Bowles then concluded his thread with an overtly dramatic poem that described the written language as “A tool we wield /to carve our happiness out of the crude / stuff of reality. / to stave off the darkness of existential despair / to fight against those who would snuff out our spark, our essential dignity & humanity / to assert our right to EXIST in the face of fools like you.”

“So curl up with the books you love & let us help young people discover the ones THEY love,” he continued. “They won’t be the same titles, I’m afraid. / Millions of books exist. / We’re not sticking to the few dozen you’ve declared holy writ. / Our kids deserve more. / They deserve freedom.”

Unfortunately for Bowles, his self-professed expertise on the topic of education was undercut severely by his own pinned tweet, in which he rather bluntly stated that US educators “don’t know what we’re doing.”

“I have a doctorate in education, but the field’s basically just a 100 years old,” read his tweet. “We don’t really know what we’re doing. Our scholarly understanding of how learning happens is like astronomy 2000 years ago. Most classroom practice is astrology”. 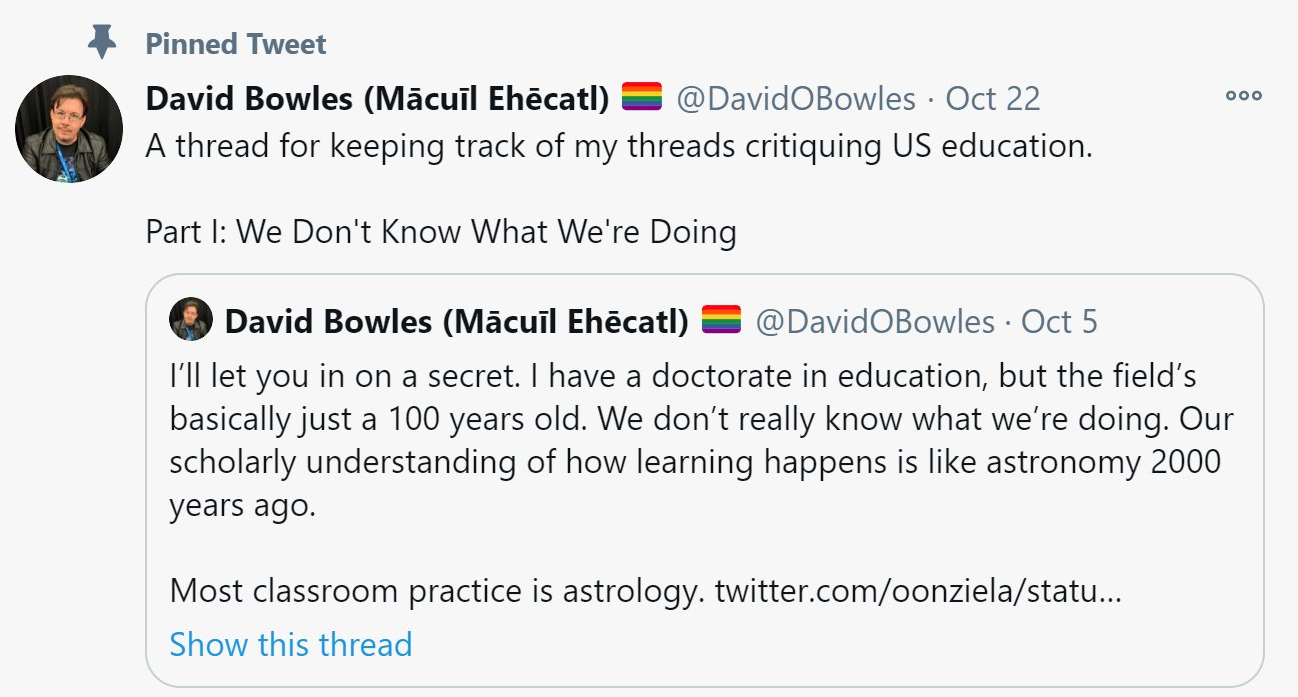 He would later return to his thread to respond to “the trolls replying to this thread (especially the tweet with my credentials) with a variation on ‘shut up, nerd’ are not doing their side any good.”

He added, “‘Shut up, nerd! We’ll keep forcing classics on children.’ What an absurd string of words. JFC.”

He then summarized his thread with a “tl;dr version” of his thoughts, writing “Literally NO ONE is saying people SHOULD NOT read the classics.”

“We’re saying that they shouldn’t be forced on modern young people in the classroom,” he explained. “There’s no data demonstrating the instructional soundness of that approach, and lots that shows it’s harmful.”

Bowles’ rantings did not end with this particular thread, as he continued to profess his superiority over his critics and brag about his credentials in additional tweets.

Unfortunately, the author locked his Twitter account before a proper archive of said tweets could be made.

Novelist and comic book writer Jon Del Arroz commented on Bowles’ tweets saying, “This David guy is really just about his tribal politics at the end of the day. And trying to make everybody miserable around him who is having a good time.”

He went on to state, “Now, he’s mad nobody’s paying attention to his works and not putting them in the same category as ‘the classics.'”

What do you make of Bowles’ rant? Do you agree or disagree with his opinion that American schools need to focus more on Young Adult literature?