Twitch has removed the ‘blind playthrough’ tag from their site in order to create a more inclusive atmosphere for disabled players. 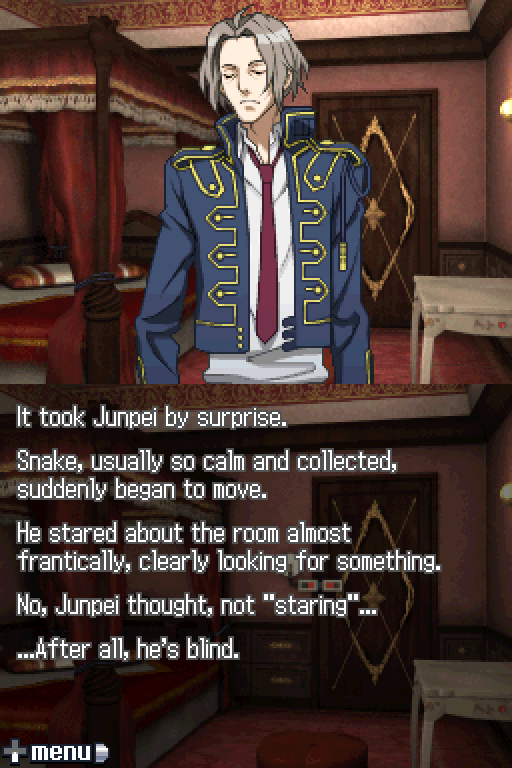 The tag’s removal was revealed on December 4th by Twitch’s Community and Creator Marketer Erin Wayne, who announced on her personal Twitter account that she was “Happy to see Twitch has listened to everyone who shared feedback and removed the “Blind Playthrough” tag to encourage more inclusive language for our community.”

“You can still use “First Playthrough” or opt to use it in combination with “No Spoilers” for the same sentiment,” she added. 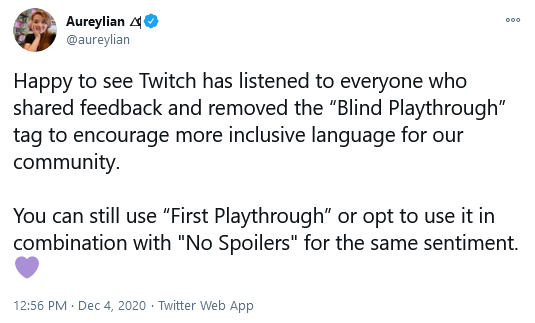 ‘Blind playthrough’ is a term that typically refers to a playthrough of a game undertaken by a player who has absolutely no background information on the title prior to inserting the disc into their console or loading up the game for the first time.

The appeal of these runs is two-fold. On a personal level, this type of experience allows one to truly engage with and be taken in by the game’s design. For streamers, it also offers the opportunity to share a game with their community, particularly with fans excited to see their favorite personality discover a particular game for the first time. 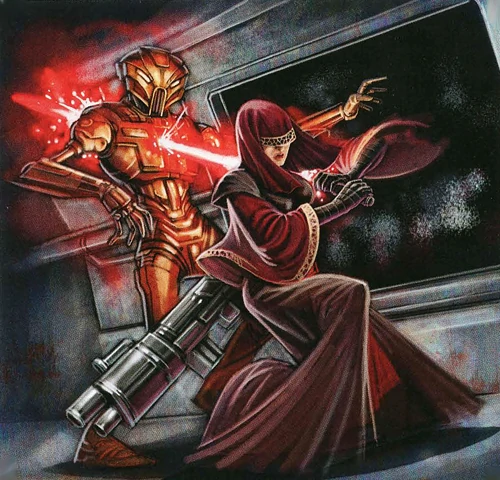 When pressed on just why this term was ableist, Wayne referred to a tweet from disability activist and Able Gamers Charity COO Steven Spohn, himself disabled, who asserted earlier this year that, “Just as we used to say “gay” when something was bad, using disability terms as an alternate word for a negative situation or feeling is common in today’s language. But just as we stopped saying gay to mean bad, we can stop saying these words too.” 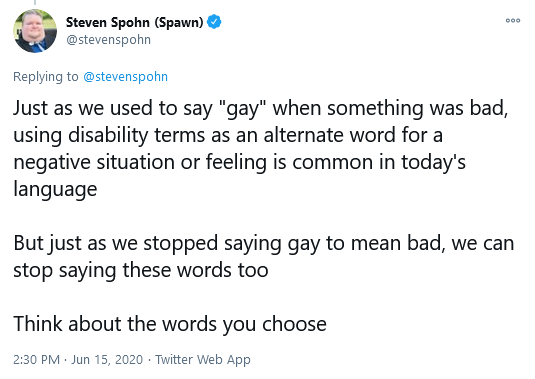 In specific reference to the term ‘blind playthrough,’ Wayne put forth alternative options, “’No spoilers play through’ or ‘Undiscovered,’ or ‘first.’

However, these terms, save ‘undiscovered,’ hold completely different connotations from the original term. 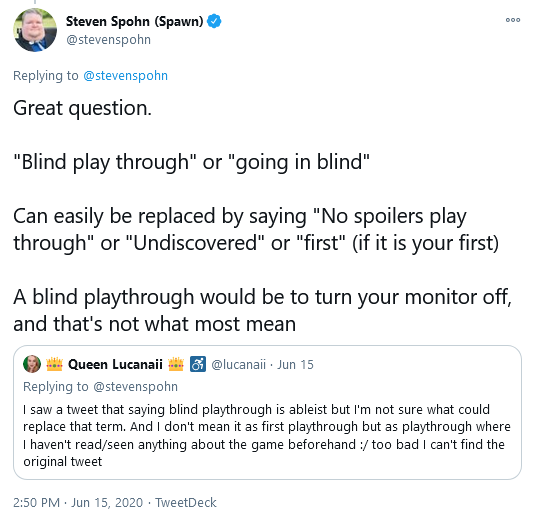 Following Twitch’s announcement, Spohn would praise their decision, stating he was “happy to see Twitch following through on promises to address and resolving issues and concerns from the disability community,” and declared that “it’s just the beginning.” 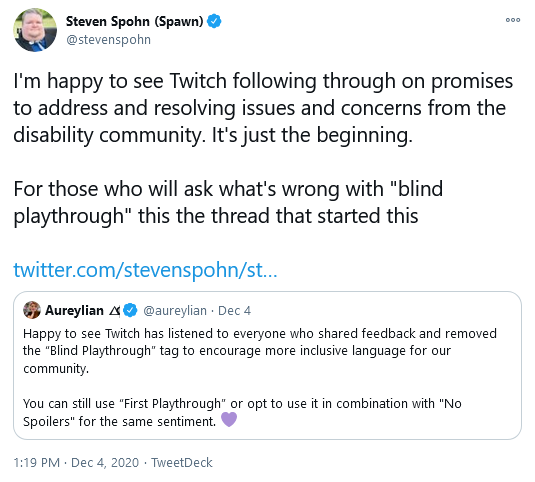 Despite Twitch’s best intentions, this inclusive naming change was not well received, particularly by the very demographic it was meant to protect.

Twitter user @Adri_Rin challenged Wayne’s claim that the change came as a result of “everyone who shared feedback,” as they could only find “a bunch of PR people saying ‘This will be more inclusive c:’ while comparing a totally correct usage of a word to actually derogatory disrespectful slang.” 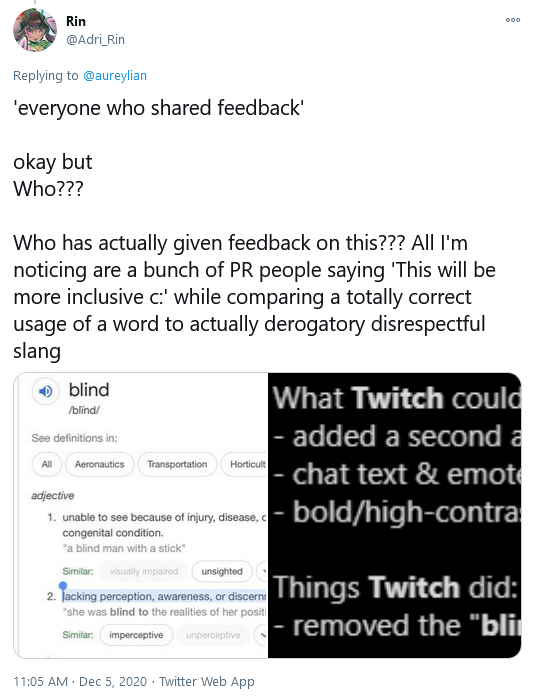 “I’m a blind streamer who uses twitch and was not asked for feedback, I am not offended by blind playthrough but I AM offended that this is giving false narrative to blind/VI people,” responded streamer Clarey. “Once again we are being overlooked and words are being put in mouths.” 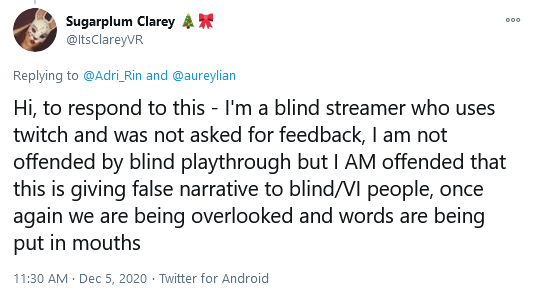 Sheena Perez, another visually impaired streamer, echoed these sentiments, sharing that she “was never asked for my feedback nor am I offended at the term “blind playthrough.” 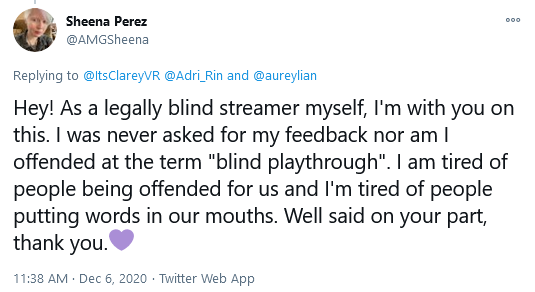 “If you really wanted to advocate for the visually impaired and blinder gamers out there,” wrote legally blind Twitch streamer Adj, “Advocate for accessible games and make your app/program actually ACCESSIBLE instead of dodging the things that actually need to be fixed and congratulating yourselves.” 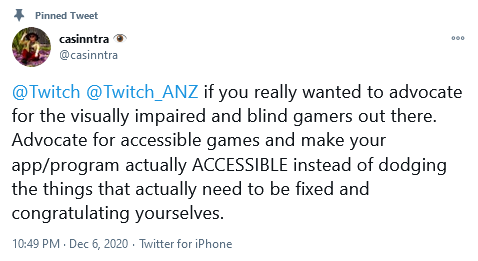 Adj then called for Twitch to “Get educated! And stop with your performative ‘activism’ it makes me sick.”

In a subsequent tweet Adj rhetorically asked, “Was asking us [visually impaired] people ever on the cards? Of course not #twitch, that would mean you’d have to put actual effort into looking at the demographics that use your platform”.

@thelexikitty put forth several changes “Twitch could have done to support us visually impaired peeps”, criticizing how instead, the streaming service merely “removed the “blind playthrough tag.” 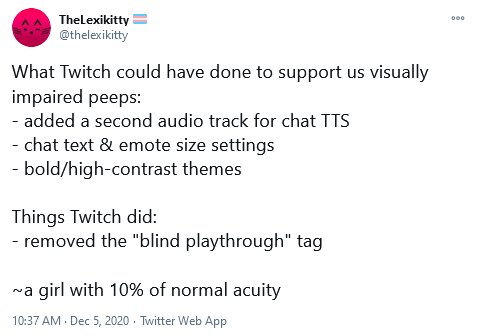 In the wake of this backlash, Wayne responded to critics by apologizing to “anyone in the community [who] felt like I spoke for them or made a decision without their input.”

She clarified that she was not the one responsible for the change, and encouraged those who had an issue with the term’s removal to reach out through official channels to voice their concerns.

“If anyone in the community felt I spoke for them or made a decision without their input, I apologize,” said Wayne. “I care deeply about the experience and opinions of every user, and I want to assure you that was not the case.”

She then added, “If you have feedback, I am here to listen. However, I’m one person and often not the right one.”

She did say that she was “happy to pass it along but if you have feedback, sending it to our UserVoice is the absolute best way to ensure it gets to a place where action can be taken.” 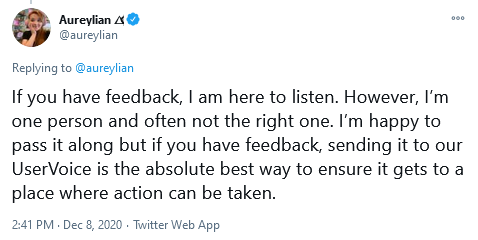 Twitch’s attempt at inclusive naming was also covered by Dark Titan Enterprises’ Vara Dark, who similarly took issue with how the streaming platform “do stupid stuff just to make themselves look more inclusive, or just to look like they care about what their streamers and their community want, yet they don’t really do anything that helps.”

What do you make of Twitch’s decision? Share your opinion with us on social media or in the comments down below!