William Pugh, the director of video game developer Crows Crows Crows and co-creator of the popular indie title The Stanley Parable, has intentionally misrepresented Cyberpunk 2077’s EULA for the sole purpose of adding fuel to the outrage against the game’s developer, CD Projekt Red. 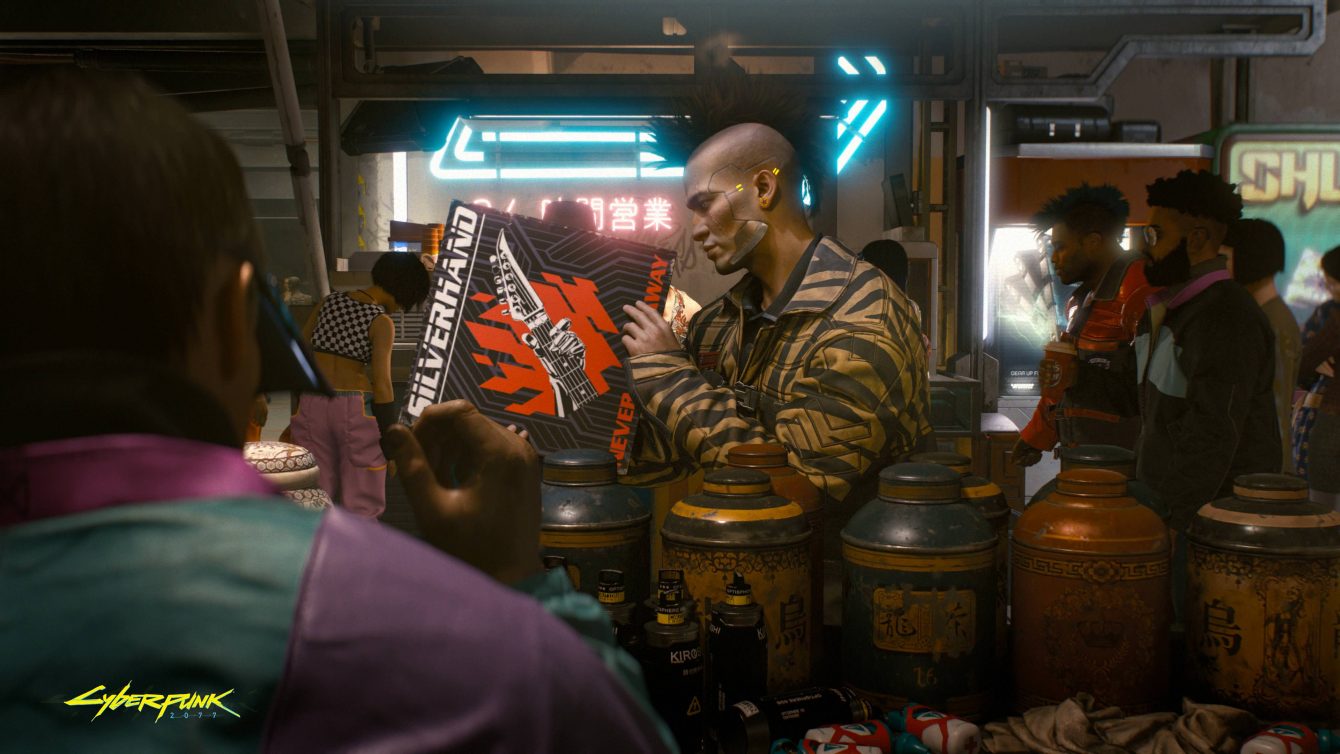 As copies of the game began to slowly trickle out into the wild prior to its December 10th launch date, Game Informer published a “Cyberpunk 2077 Epileptic PSA”, wherein Associate Editor Liana Ruppert drew on her own experience of suffering a seizure while playing to warn players of various “triggers” throughout the game.

In particular, Ruppert pointed to the game’s “braindance” mechanic, which presents a series of rapidly flashing lights each time the player chooses to ‘plug in’ to the memories of another character.

Following Ruppert’s article, CD Projekt Red thanked her for bringing up the issue, explaining that they would be “working on adding a separate warning in the game, aside from the one that exists in the EULA.

They added, “Regarding a more permanent solution, Dev team is currently exploring that and will be implementing it as soon as possible.” 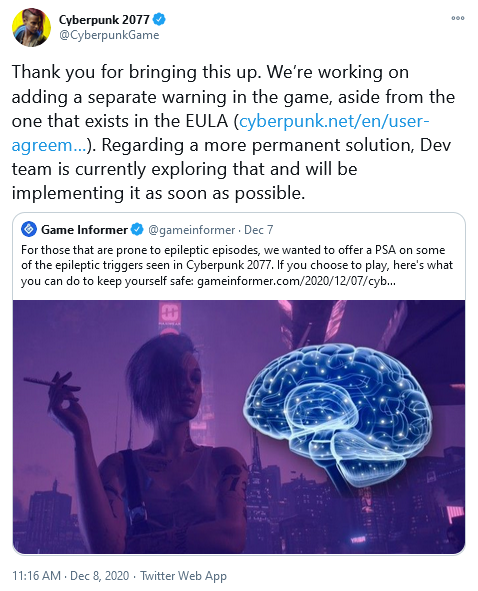 In the game’s EULA, which also features a “quick summary” of certain articles throughout the agreement written in the voice of “a Night City native, a real cyberpunk who knows what’s what when it comes to translating legal-speak,” CD Projekt Red provides an explicit warning that “Cyberpunk 2077 may contain flashing lights and images, which may induce epileptic seizures” and asks that “if you or anyone in your household has an epileptic condition, please consult your doctor before playing Cyberpunk 2077.”

“‘Nother warning here, an’ it’s an important one, too!” reads the Night City resident’s translation. “If you or someone you live with suffers from an epileptic condition, talk to your doctor before jackin’ into Cyberpunk 2077.”

It was then that Pugh, hoping to join the chorus of critics eager to deride Cyberpunk 2077 for any infraction, perceived or otherwise, took issue with CDPR’s response and how the warning only appeared in the EULA.

“Silly us!!!” Pugh said sarcastically. “It was in the EULA the whole time!!”

He added, “You can do anything if you put it in your EULA first!”

Intentionally cropping out the legal EULA text and citing only its ‘Night City’ translation, Pugh proceeded to attack CD Projekt Red as if they had intentionally disregarded people’s safety amidst a bevy of ongoing health risks during the development of their game. 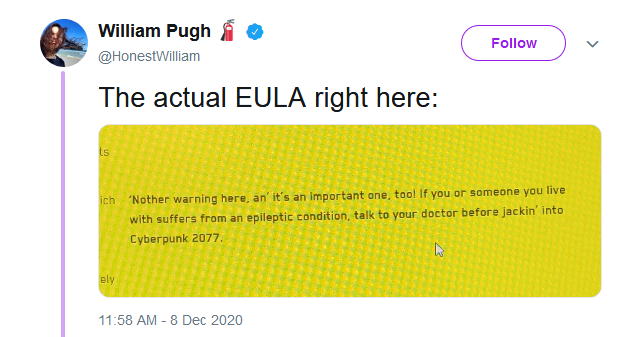 “hey doc thanks for squeezing me in late notice during the most deadly winter of our lives… YES I DO know it’s a pandemic & shit (good job on the vaccine btw) but anyway yeah can I play this specific videogame??” the developer facetiously wrote.

When asked by @Kappische “what’s your problem”, Pugh colorfully explained that his issue was with the warning’s single placement being in the EULA. 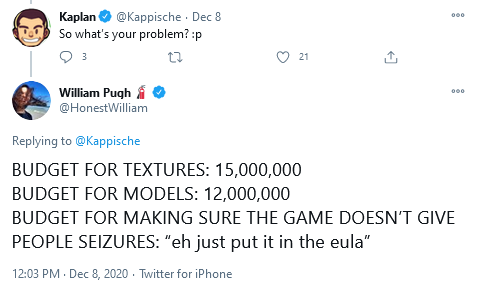 In response to one user, who after reading Pugh’s tweets was “convinced that people are willing to throw a temper tantrum over literally anything if the thing is popular enough,” the developer childishly asked the user to “suck my nips retweet pete”. 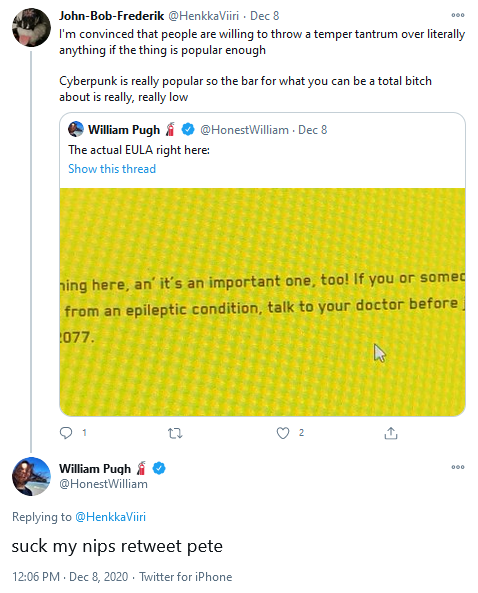 When the user replied “maybe I f—ing will” and asked “what are you going to do then, complain if I don’t speak in text-book language while cuddling?”, Pugh tweeted an image of a fictitious personal EULA that read “if you reply to william’s tweet you’re a f—in’ lil loser who likes sticking old penniers up yet nose govnah!!” 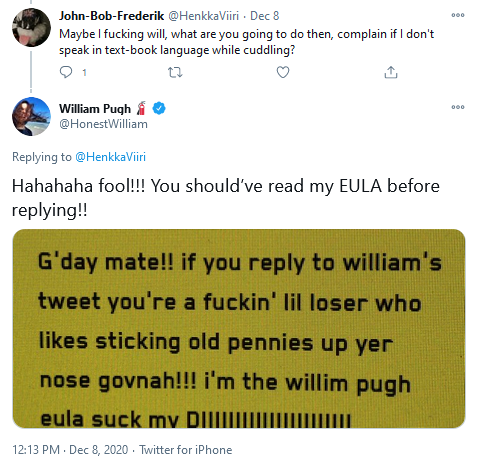 Unsurprisingly and rather embarrassingly, when confronted by players who pointed out that he had deceptively left out the game’s actual legal text, Pugh exclaimed that “THE FANS ARE COMING FOR ME”.

What do you make of Pugh’s tweets? Let us know your thoughts on social media or in the comments down below!