Twitch has banned the original version of the popular PogChamp emote from their platform over comments made by ‘face of the emote’ that the company allege encouraged “further violence” following the recent protest on Capitol Hill.

In the aftermath of the events of January 6th, Ryan “Gootecks” Gutierrez, whose real-life appearance provides the image used for the PogChamp emote, asked his Twitter followers if there would “be civil unrest for the woman who was executed inside the Capitol today or will the #MAGAMartyr die in vain?”

Gutierrez’s call to arms was made in reference to the death of Ashli Babbit, the late Air Force Veteran and protestor who was fatally shot by Capitol Hill police after attempting to enter the Speaker’s Lobby of the Capitol.

Shortly after its posting, the now-deleted tweet caught the attention of Twitch streamer Natasha “Zombaekillz” Zinda, who by Polygon’s own reporting “led” the charge to have the emote banned entirely from the platform.

“so @Twitch due to this lovely statement,” wrote Zinda, “i think this pogchamp emote needs to be removed.” 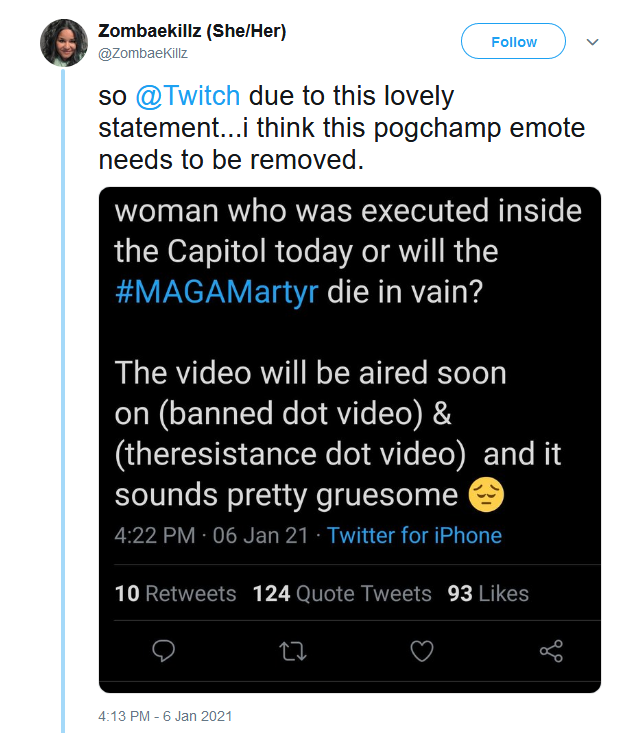 In light of the call by Zinda and a massive number of other Twitch streamers who called for the PogChamp emote to be retired, the company announced later that day that they had “made the decision to remove the PogChamp emote following statements from the face of the emote encouraging further violence after what took place in the Capitol today.”

“We want the sentiment and use of Pog to live on – its meaning is much bigger than the person depicted or image itself– and it has a big place in Twitch culture,” they added. “However, we can’t in good conscience continue to enable use of the image.” 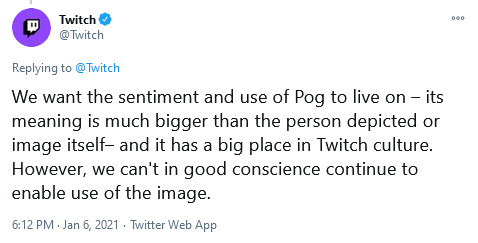 Twitch concluded their announcement by assuring their users that they would “We will work with the community to design a new emote for the most hype moments on Twitch.”

On January 8th, “in the spirit of figuring out 2021 together,” Twitch declared that they would replace Gutierrez’s appearance with the temporary introduction of a frequently rotating selection PogChamp-esque emotes.

“Get ready for a new PogChamp every 24 hours, starting today,” stated Twitch. 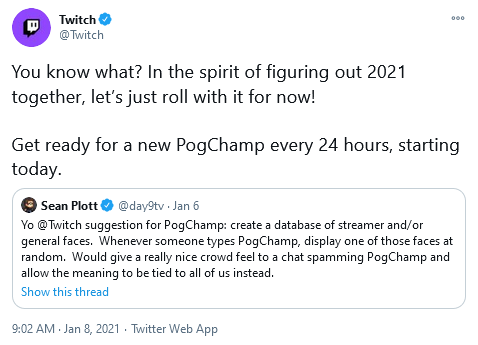